In days of pestilence and its resulting trouble, warranted is the apostle’s admonition that we “be not soon shaken in mind” (2 Thess. 2:2). When tempted to broadcast our opinions on said pestilence and its effects, the caution of Proverbs 29:11 is also in order: “A fool uttereth all his mind: but a wise man keepeth it in till afterwards.” Fear and turmoil will fill the soul of the man whose nose is fixed to his newsfeed. “Perfect peace” is the blessing for the man, woman, or child “whose mind is stayed on thee” (Isa. 26:3).

The mind is a complex feature of human nature. Next to the heart, soul, and strength, the distinguish­ing characteristic of the mind is the capacity to think. When a man is possessed by a legion of devils, in his unstable mind he will sit among the tombs crying and cutting himself with stones (Mark 5:5). When the same man is delivered by Jesus, he will be found at the feet of the Lord “sitting, and clothed, and in his right mind” (Mark 5:15). The noble Bereans used their minds to search the Scriptures daily to see whether the things Paul taught were so. But what made them more noble than the riotous Thessalonians is “they received the word with all readiness of mind” (Acts 17:11).

We make a mistake if we conflate the mind with the brain, even though the two are mysteriously related like the soul to the body. Where the brain has no more ca­pacity for right or wrong than a stone, with all his mind a man is called to love the Lord his God (Matt. 22:37). Where the brain may be treated with medicine and sur­gery, the mind can only be healed by the covenant God who promises, “I will put my laws into their mind, and write them in their hearts” (Heb. 8:10). It is only when thus renewed that the mind will begin to serve the law of God (Rom. 7:25). But we ought not discount the potency of the spiritual mind, for not in vain is the be­liever admonished, “be ye transformed by the renewing of your mind” (Rom. 12:2).

After what pattern is the spiritual mind renewed? After the mind of the Lord, of course! Not even a prophet of Moses’ stature (Num. 16:28), much less a false prophet like Balaam, may “go beyond the com­mandment of the Lord, to do either good or bad of [his] own mind” (Num. 24:13). It was unspeakable wickedness when Jerusalem sent her sons through the fires of human sacrifice, about which Jehovah said, “I commanded not, nor spake it, neither came it into my mind” (Jer. 19:5). So full of wrath was Jehovah in those days He declared, “Though Moses and Samuel stood before me, yet my mind could not be toward this peo­ple” (Jer. 15:1). Hopeless, it seemed, for had God not once promised from the mouth of that very same Sam­uel, “I will raise me up a faithful priest, that shall do according to that which is…in my mind” (I Sam. 2:35)? That priest would also be a king, like David, in whose mind it was to build a house to the name of Jehovah his God (1 Chron. 22:7).

But what sort of mind would this priest-king have? Would it be a mind hardened in pride like King Nebu­chadnezzar who boasted of his golden city (Dan. 5:20)? Would it be a mind vainly puffed up after the rudiments of the world and the ordinances of men (Col. 2:18)? A mind that seeks after earthly things (Phil. 3:19)? A mind of the flesh (Rom. 8:5)?

On the contrary, it is this mind: that, though He “thought it not robbery to be equal with God,” He “took upon him the form of a servant, and was made in the likeness of men: And being found in fashion as a man, he humbled himself, and became obedient unto death, even the death of the cross” (Phil. 2:6-8). His was a mind of willing suffering, so much so that He cried out with the psalmist, “I am forgotten as a dead man out of mind.” (Ps. 31:12). His was the mind of the elect of God, which more than bowels of mercies, kindness, meekness, and longsuffering includes “hum­bleness of mind” (Col. 3:18). The mind we are describ­ing, of course, is the mind of Christ Jesus, on account of which mind “God also hath highly exalted him” (Phil. 2:9). By this mind the sovereign God accomplishes His loving purpose toward all His elect people! No wonder the Scriptures burst out in praise, “Who hath known the mind of the Lord? Or who hath been his counsel­lor?” (Rom. 11:34).

It is therefore on solid gospel grounds that the apos­tle exhorts all Christians, “let this mind be in you” (Phil. 2:5). And how shall this mind be in you? When “in lowliness of mind…each esteem(s) other better than themselves” (Phil. 2:3). When, following the exam­ple of Paul, you are found “serving the Lord with all humility of mind, and with many tears” (Acts 20:19). When such humility characterizes your mind, more and more in the church we shall “be likeminded, having the same love, being of one accord, of one mind” (Phil. 2:2). After all, to be of one mind is the great goal of all teaching concerning the mind of Christ, which is why the church is repeatedly exhorted to “be of one mind” (2 Cor. 13:11), “be perfectly joined together in the same mind and in the same judgment” (1 Cor. 1:10), “be of the same mind one toward another” (Rom. 12:16), and “be ye all of one mind” (1 Pet. 3:8). Yes, when it comes to the adiaphora of Christian liberty, each must be “ful­ly persuaded in his own mind” (Rom. 14:5). But when it comes to gospel truth and love for the brother, “with one mind and one mouth glorify God, even the Father of our Lord Jesus Christ” (Rom. 15:6).

What a contrast with the kings of the world who also “have one mind, and shall give their power and strength unto the beast” (Rev. 17:13)! And yet so far is their mind from the mind of Christ that it is a “reprobate mind,” whereby they do “not like to retain God in their knowledge” (Rom. 1:28). Even if such a one brings a sacrifice, it is only ever with a “wicked mind,” and is thus an abomination to the Lord (Prov. 21:27). For those with such a carnal mind, which exhibits neither unity with Christ nor with His people but rather “enmi­ty against God,” there is only death (Rom. 8:6, 7).

So, people of God, do not live as children of wrath as you did before, when in times past you fulfilled “the desires of the flesh and of the mind” (Eph. 2:3). Do not mind “high things” or be “wise in your own con­ceits” (Rom. 12:16). Neither be of a “doubtful mind” concerning the care God will provide for you in unset­tling times for the sake of Christ His Son (Luke 12:29). Rather, remembering that it is of the Lord’s mercies we are not consumed, and that His mercies are new every morning, say with Jeremiah, “This I recall to my mind, therefore have I hope” (Lam. 3:21). 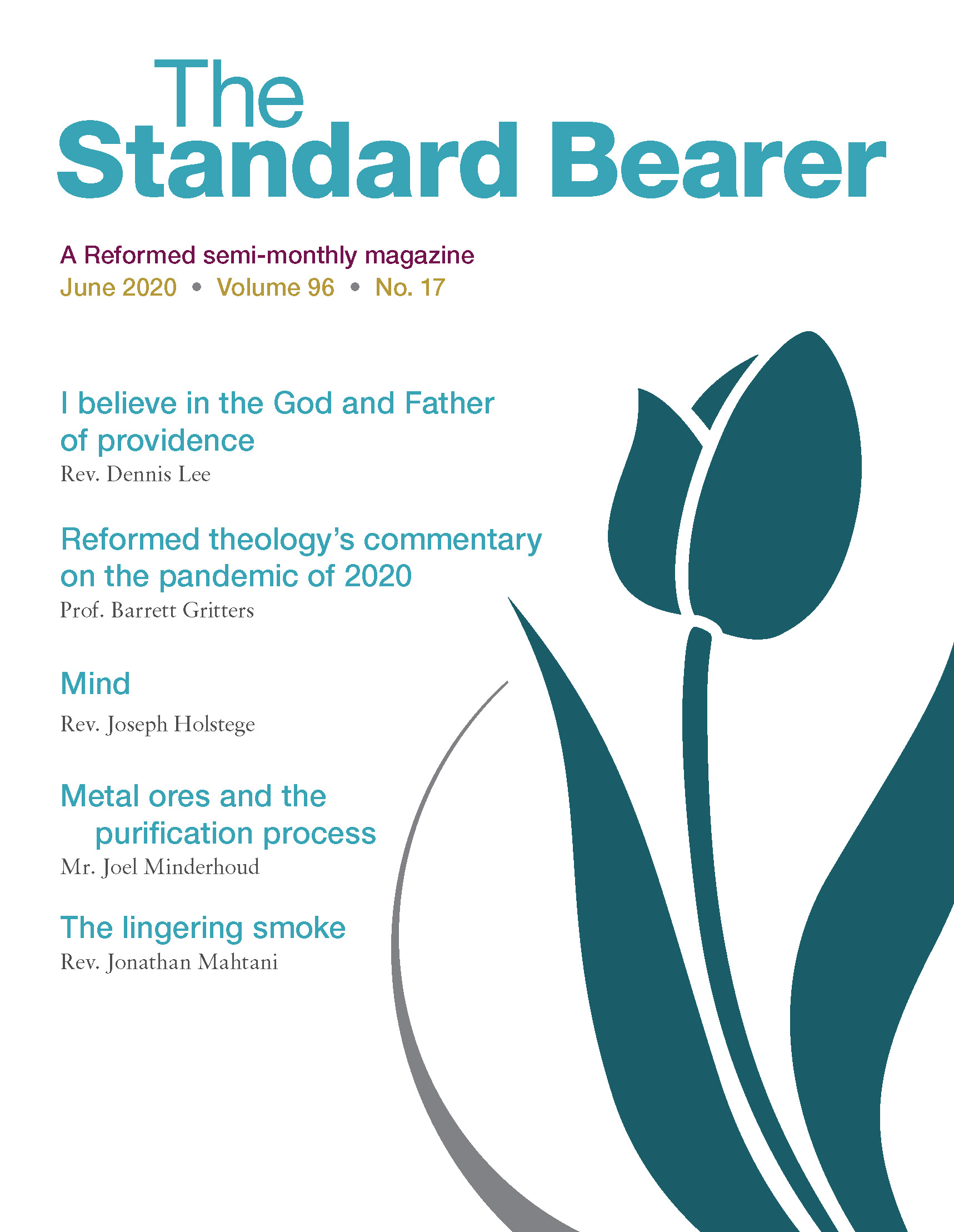