In this article we continue a response to one of our readers, Mr. Harv Nyhof, who raised certain questions concerning an article in the December 15, 1985 issue. As we also quoted the paragraphs in question in the first part of our response the reader is referred to that preceding column. It was in that connection that Mr. Nyhof responded,

I am tempted to say, “Come on, Pastor Miersma, you can’t be serious.” If the spoken or written word is not understood, be it ever so beautiful or descriptive, it has no value. To me the KJV is a beautiful translation with majestic language. Most younger English-speaking people, however, will receive no enlightenment from the phrase “bowels of mercy.” They will easily understand the word “compassion.” I too believe in careful and accurate translation. Is it not the aim of accurate translation to reproduce in meaningful language for the reader what has been written in a tongue foreign to him? To read in

that men are “settled in their lees” will not be comprehensible to the majority of English speaking people. To read that men are “complacent” can be easily grasped.

The central issue which you raise, it seems to me, has to do with the question of what constitutes a meaningful translation. Here the first question must be one of standards. It is certainly true that the beauty or merely descriptive character of the language of a translation cannot be the standard, if by this is meant simply “art for art’s sake.” In fact, if God had given us His Word in slang language it should be translated in slang language. The beauty of the KJV is rooted in its reverence for the text as Gods Word not in its artistry or majestic language per se. I do not find the word “bowels,” for example, to be particularly majestic. Nor is our use of the KJV based on its artistic beauty. The concern you express for a meaningful translation however is a proper and important concern. The reformers were concerned to give unto the church the Word of God in the language of Gods people. This is a matter of Reformed principle to which we must hold. God gave us His Word that we might be taught out of that Word by His grace and Spirit. It was exactly for that reason that the reformers quickly set about the labor of translating the Word of God at the very beginning of the reformation. Nor were they content with the existing translation of the Bible approved by Rome, the Latin Vulgate. Latin was the scholarly language of a few which the vast majority of the people could not understand or read. It was with this in view that Luther began his translation of the Bible into German, and the other reformers also labored to translate God’s Word into the other languages of the Reformed churches. For the sake of putting the Bible into the hands of Gods people in their own language, men like Tyndale were willing to risk their lives and even to lay down their lives as martyrs for the cause of God’s Word of truth.

If we were to continue to use our KJV merelybecause of the artistry or poetry of the language, or because of its long standing, or because of tradition, when it had in fact become incomprehensible to the people of God, we would be guilty of departing from the foundation laid down by the reformers and returning to the principles of the church of Rome. If it ever becomes the case that the KJV is no longer understood and meaningful, Reformed principle would require us to abandon it for another, or to translate God’s word anew. We are not opposed in principle to a new translation if there is a need for it.

This has nothing to do however with the modern trend of perpetually tampering with the translation currently in use for no good reason, with the result that today we are confronted with a host of different versions or translations of varying quality, continually issued under the banner of being current, modern, or more meaningful. This present vogue for new Bible translations has created nothing but confusion in the Christian community and presently has taken on all the characteristics of the changing trends in the world of fashion.

Nor has the multiplying of so-called more modern and meaningful versions of the Bible solved the basic problems they were supposed to cure, such as indifference to the study of God’s Word by young people, or more serious interest in Gods Word or its study. The fact is that there is probably more fruitful and serious Bible study being done today with theKJV than with any other version, and that exactly because it is both meaningful and clear, and faithful and accurate, and also lends itself to careful Bible study.

The first is the historic Reformed standard rooted in the principle that the Bible is the infallible, verbally inspired Word of God. According to it a good translation is one which faithfully and accurately renders into the English language what God said, and does so as carefully and literally as is possible within the boundaries of English language. According to this standard every word and expression of Scripture has meaning which is of divine origin, God’s meaning, and that extends even to the way in which God spoke His Word to us. A meaningful translation therefore is one which is in harmony with the content and meaning God gave His Word, as He spoke that Word to us. Therein lies the only basis for judgment.

To refer to the examples we have been using, the Holy Spirit had a reason for saying “bowels of mercies” instead of simply saying compassion, which He could have done. This is actually the case. The word “compassion” merely expresses the idea of the expression “bowels of mercies.” It fails however to express all that the text expresses, for in the vivid picture of “bowels of mercies” God is, at the same time, directing us to the nature of that compassion which is an inward yearning after another person in his need and not merely outward actions. It also directs us to the intense character of that compassion. It is in this sense that I spoke of bowels as drawing a “vivid picture” in my article, not as a matter of artistry or poetic beauty, but as a matter of a full and complete translation which conveys the full meaning of the original. Admittedly, “bowels of mercies” is not as easy to grasp as the word compassion; it takes study and reflection, but it is also more meaningful and less superficial, as well as being accurate.

The other standard, which is the one commonly underlying many of the modern so-called translations of Scripture, I consider an inherently unbiblical one. It basically sets up the “average reader” as the standard of Bible translation. The “average reader” is, according to his perceived level of comprehension, breadth of vocabulary, and presumed reading skills, supposedly on about the level of a high school sophomore or lower. The root principle of this approach is not the doctrine of divine verbal inspiration of the Scriptures, but the principle that the Bible must be so translated as to be easily read and understood by this “average reader” as he stands in the mind of the committee doing the translating. Ultimately this makes the committee itself and its ideas and conceptions the standard. Fundamentally such an approach presumes to be wiser than God, and to sit in judgment on the Word God has given us, and to pass that judgment by declaring this word too difficult to read and that word too hard to understand. And having made that judgment it presumes to intrude its own interpretation or words into the text, or subtract from them, in the place of what was actually said. Now there are certainly times when because of the differences between the original languages and the English language, words must be inserted or expressions must be differently expressed; but this is a far cry from taking something which can easily be rendered into English and mis-translating it on the basis of one’s own presumed wisdom, as is the case with the examples mentioned.

Nor is this root principle in harmony with the Word of God. This principle and standard presumes that the Bible ought to be easy reading and therefore proceeds to make it easy reading. Now while it is certainly true that the Scriptures are clear and understandable, this does not mean that God intended that the Scriptures should be easy reading or easily grasped, which I understand to mean “comprehended by effortless reading without work involved.” The fact is that the Scriptures are comprehensible in the form God gave them but they require us to study them. We are told not simply to read them but to search them (John 5:39; Acts 17:11), to compare spiritual things with spiritual (I Corinthians 2:13; II Timothy 2:15), that there are in them things hard to be understood which the unlearned and unstable wrest to their own destruction (II Peter 3:16). Likewise we are called to meditate upon them and to think upon God’s Word day by day (Psalm 119:15, 34, 35, 54, etc.; Psalm 1:2;Psalm 19:7-11).

The philosophy of easy reading ultimately caters to spiritual laziness on the part of many while making serious Bible study more difficult for those who would faithfully study God’s Word. Moreover, when the standard of translation becomes the wisdom of a committee of men who presume to know better than God how to express His Word, the matter becomes serious indeed. The fullness of God’s Word is taken out of the hands of believers by what a committee in its arbitrary judgment deems meaningful, in the place of God’s Word. The result is that a new priesthood of scholars is erected in the form of Bible translators who stand above the Word of God on the one hand, and who, on the other, by their very actions are condescending to what becomes the ignorant masses for whom they are translating the Bible. I find this intolerable. It is demeaning to Gods Word and to Christ’s church. Moreover the apparent motivation behind much of this seems to be that if only we make Gods Word simple enough and understandable enough then men will believe it, as if the reason for man’s unbelief lies in the difficulty of reading the Bible. Such thinking is inherently Arminian and unreformed and reduces what is a matter of Gods grace working faith by His Word to mere lack of comprehension. The fact is that man will never find God’s Word meaningful apart from God’s grace, for he is by nature a blind sinner. 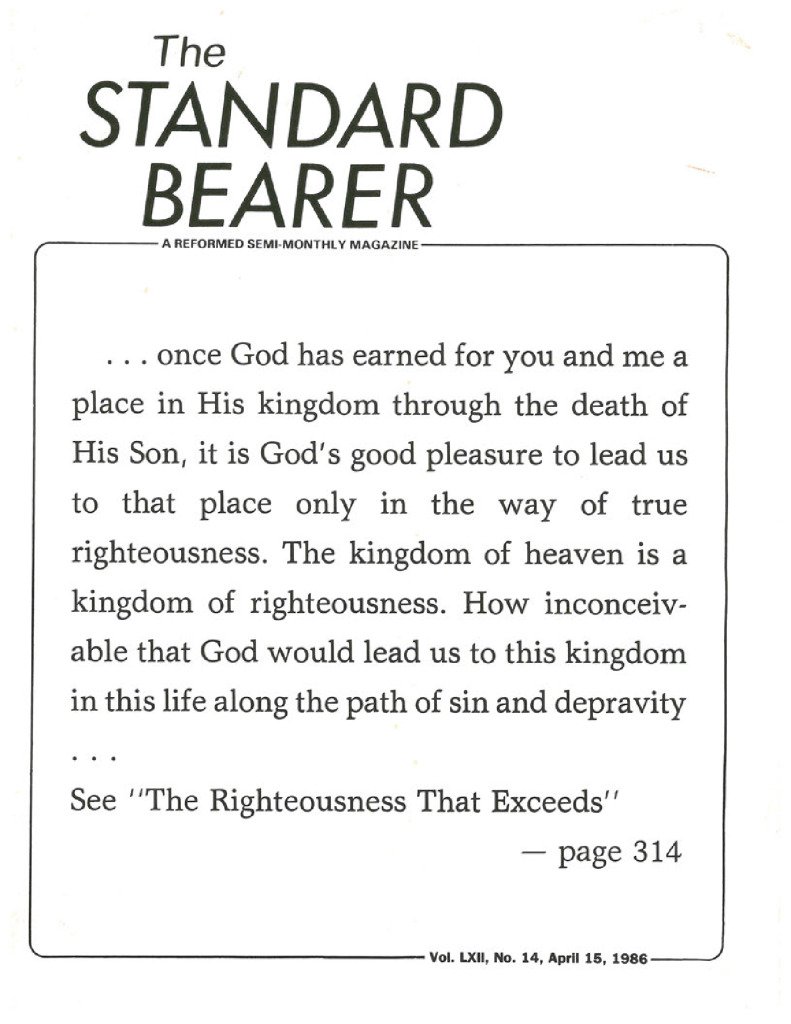