“My aim in life is in finding happiness!” It seems almost everybody these days says this. There is nothing really wrong in wanting happiness, is there? No, indeed; not if you want to obtain it in the right way. On this note there is much to be said. But pause for a moment and consider that the word “happiness” is not found in our King James Bible. Yet it is still the world’s “best seller” book. (I wonder how that “grabs” modern joy-seekers!) The word “happy” is found in the King James Bible about twenty-eight times. But the word “obey,” in all its forms, appears there about one hundred forty-six times. Why is that? Isn’t the Lord telling us something in this comparative word emphasis? He sure is! For one thing, as the “happy” texts show, happiness comes to us only in the way of doing right. For example, it comes: in showing mercy to the poor (Prov. 14:21), trusting in the Lord (Prov. 16:20), keeping His law (Prov. 29:18), in knowing and doing the word of Christ (John 13:17), by enduring patiently (James 5:10, 11), and suffering for righteousness’ sake (I Pet. 3:14) or for Christ’s sake (I Pet. 4:14). Further, to be happy, would you be willing to sell all that you have and give to the poor? One rich young man could not do that, and, consequently, went away sorrowful and unhappy. Do you imagine that you could be happy in any enterprise in which you would not be trusting in the Lord? Is there happiness in any way of sin or transgression of the law of God? Could you be happy in ignorance, in not knowing anything of God’s truth? (Is ignorance bliss?) Could you be happy intellectually knowing the truth, but never having a lick of godly conformity to truth? David has said, “Cause me to know the way wherein I should walk . . . Teach me to do Thy will”, (Psalm 143:8, 10). Happiness comes by knowing the way, plus an obedient going in the way. Knowledge without obedience is lame; and obedience without knowledge is blind. Therefore, for lasting happiness, divine knowledge and holy obedience may not be separated. Could you be satisfied with a temporary happiness, one which does not endure? Do you imagine happiness would be obtained if only you could succeed in removing all suffering from your life? If happiness comes in the way of suffering for righteousness’ sake and for Christ’s sake, then are there, after all, many, or any, happy people in the world?

It is plain that everybody wants to be happy. But do we realize that we can never attain to happiness by trying to be happy? Make happiness your aim and you will always miss it. For happiness is the child (fruit) born of the inseparable union of its parents, knowledge and obedience. Then happiness is not a goal in itself, but the result of pursuing the right goal. So that that pursuit is not the pursuit of happiness as such, but the pursuit of that which results in happiness. Nor is it according to scripture that all men are endowed by God with an inalienable right to the pursuit of happiness. Like sleep, keep pursuing it and it keeps eluding you.

Put happiness first and we think like neither Calvinists nor Christians. For the Christian puts first God and how best to worship and serve Him. Cain did not do this. He supposed God could be worshiped and served as he felt was good enough for Him. Actually, though not literally, he offered God the lame and the blind. No wonder he did not know happiness! For Cain’s face fell and he was miserable. He would have done well if only he had sought God’s chief end for man. “What is the chief and highest end of man? Man’s chief and highest end is to glorify God, and fully to enjoy Him forever” (Westminster Larger Catechism). Glorifying God must be my chief and only good. When it is, then I shall enjoy Him, and that will make me happy. That, too, is the order of the gospel. “Whether therefore ye eat or drink, or whatsoever ye do, do all to the glory of God” (I Cor. 10:31). The glutton has it all wrong—seeking happiness in gorging and swilling. Happiness is to be found in these common and necessary activities only if we enjoy God in them. What is it to glorify God? It is to honor Him, to praise Him, to boast of His wonders, of His lovingkindness and tender mercies, to extol the praises of Him Who hath called us out of darkness into His marvelous light (I Pet. 2:9). It means to make great, to magnify all His magnificent attributes. It means to show God in His essence. Of all the multitude of God’s attributes, they are comprehended in the mass of them we call His glory. For just as the seven hues of the rainbow are the manifold beauties which belong inherently to the one essence, light, so all the attributes of God are His essence, and are summed in the one all-embracive attribute, glory. Scripture calls Him the God of glory, the Father of glory, the Lord of glory. Also it strikingly informs us that the heavens declare (show) the glory of God. We glorify God by showing forth His excellencies, that is, the attributes of His Being, by honest behavior and good works (I Pet. 2:9, 12). “Happy is that people that is in such a case!” (Psalm 144:15).

We are really, here, speaking of God’s chief end, which is the purpose God had in creating man, and also the ultimate purpose man must always have in conception and conduct. God’s purpose for man is one, with two aspects, namely, to glorify Him and to enjoy Him forever. The catechism does not speak of “all men,” although all men shall certainly glorify Him, whether willingly or unwillingly. Rather, it speaks of man, that is, mankind, namely, elect mankind. Therefore, God’s purpose that man should enjoy Him forever shall surely be realized. It is man, in the Man Christ Jesus, that is ultimately crowned with glory and honor, to have dominion, with all things under his feet (Psalm 8:5-6). It is man as chosen in Christ before the foundation of the universe to be holy and blameless before Him who shall in the way of a holy life enjoy God forever. In this lies the happiness the world neither knows, gives, nor is able to remove.

Does this chief end imply that there are other ends which are subordinate? May man live and strive for the subordinate ends? May we speak of subordinate ends, proper in themselves, as: (1) the earning and procuring of temporal support; (2) the acquisition of knowledge; (3) the indulging of lawful tastes; and (4) helping forward the welfare of society? Making a living is a necessity, but that activity does not necessarily glorify God. But procuring and maintaining temporal support must be done only in such a way as to glorify God. Then this is not a subordinate end, but the chief end kept prominent and held in reference to the matter of a livelihood. Neither does the attainment of knowledge necessarily glorify God, since more often than not in this way man is glorified. The acquisition of knowledge which glorifies God alone has His approval. Any acquisition of knowledge without glorifying God is a form of ignorance. As for the indulgence of lawful tastes, what can they be but only those which glorify God? As for furthering the welfare of society, it must first be known what is the welfare of society. What is the good of society? Not the greatest good of the greatest number (whatever that is), but it must be that which is done in faith, and according to the Word of God, and for the praise of God rather than the usual laudation of man. Repeal of the death penalty for murder does not further the welfare of society, and is not God-glorifying. It only pampers and idolizes the dregs of society. The so-called sociological experts who know nothing of what it takes to glorify God are not competent to propose anything for the welfare of society. Therefore, “chief end” is to be understood in the sense of “exclusive end.”

The other aspect of man’s chief end is the enjoying of Him forever. What is it to enjoy God? To worship and serve Him, always striving to do so more perfectly (Psalm 27:4; Psalm 96:6; Acts 27:23; Rev. 22:3, 9). For never could anyone enjoy God apart from worshiping and serving Him (Psalm 43:4). Those verses in the Revelation show that the happiness of heaven consists in worshiping and serving God there. They also reveal how long God is to be enjoyed, namely, forever. If this enjoyment of the eternal God should or could come to an end, it would so spoil present enjoyment as to turn it into nothing more than a forlorn hope. So the glorifying and enjoyment of God are to be considered one, not two ends. There are two aspects of one end, the relation between them being that of cause and effect. Enjoyment of God is the effect of glorifying Him. These two aspects are inseparable, so that we may not seek, neither can find the one without the other (I Pet. 4:11; I Cor. 15:58).

If life oriented to the glory of God and the enjoyment of Him is what really motivates us as Christians, so that we desire no more on earth or in heaven than to worship and serve Him, we ought not to be plagued with bitterness, wrath, anger, resentment, envy, jealousy, foolish talking, jesting, rotten words, quarreling, evil speaking, yelling, sharp envenomed language, the fang of malice with its vicious intent to hurt, coldness, indifference, apathy, impoliteness, lack of love, lack of discipline, lack of shepherdizing. This is a black catalog of wickedness, but it is only a preface to the cult of the ungodly. What is so sad is that we are all capable of every bit of it. In many of these things we all offend. We continually stumble and fall into sin. But may we keep short accounts with God to repent, confess and forsake our sins, ask forgiveness for them, and then on our knees give thanks to the Lord for His pardoning mercies. Thank Him that He causes us to know the way in which we should walk. Give thanks that He answers the prayer, “Teach me to do Thy will” by giving us His good Spirit to empower us to do His will. Thank Him that because we are so dead, dull, and slow, He will quicken us to righteousness and bring our soul out of trouble (Psalm 143:8-11). That way we immediately get back on the track to the life motivated to glorify God and to enjoy Him. This way we give heed to the command, “My son (daughter), forget not My law, but let thine heart keep My commandments” (Prov. 3:1). Then our life in the Lord’s service will be characterized by calm, fruitful, and happy activity. 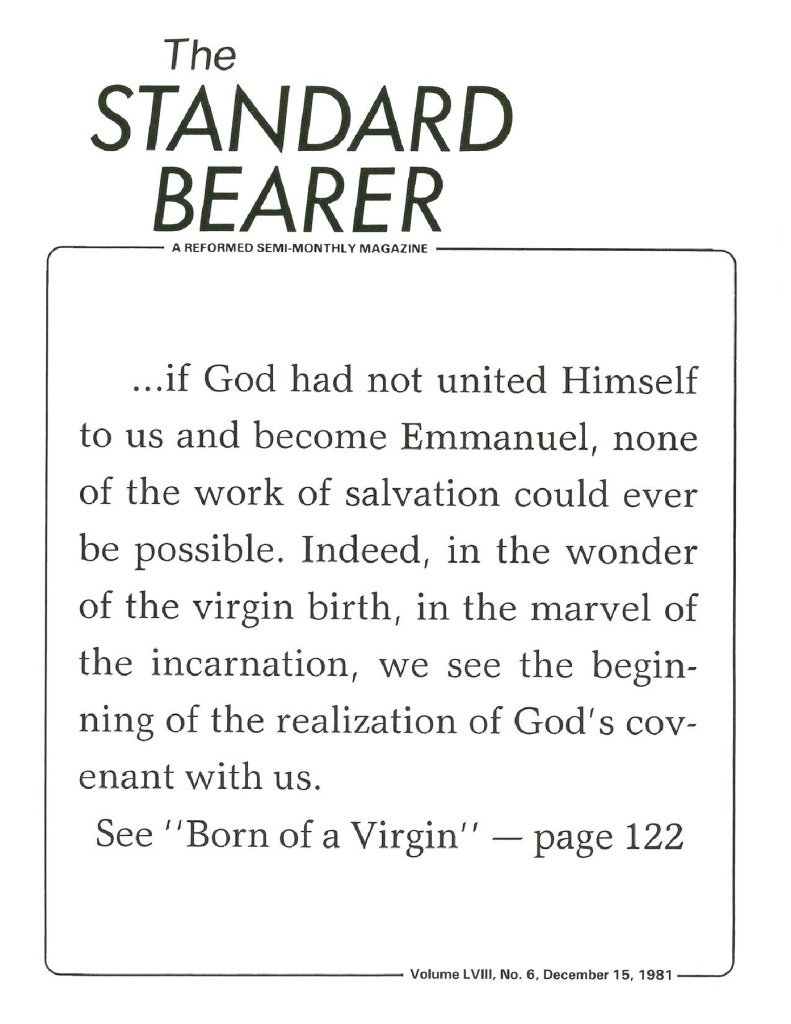