“We believe that God created man out of the dust of the earth, and made and formed him after his own image and likeness, good, righteous, and holy, capable in all things to will, agreeably to the will of God. But being in honor, he understood it not, neither knew his excellency, butt willfully subjected himself to sin, and consequently to death, and the curse, giving ear to the words of the devil. For the commandment of life, which he had received, he transgressed; and by sin separated himself from God, who was his true life, having corrupted his whole nature; whereby he made himself liable to corporal and spiritual death. And being thus become wicked, perverse, and corrupt in all his ways, he hath lost all his excellent gifts, which he had received from God and only retained a few remains thereof which, however are sufficient to leave man without excuse; for all the light which is in us is changed into darkness, as the Scriptures teach us, saying: The light shineth in darkness, and the darkness comprehendeth it not: where St. John calleth men darkness. Therefore we reject all that is taught repugnant to this, concerning the free will of man, since man is but a slave to sin; and has nothing of himself, unless it is given from heaven. For who may presume to boast, that he of himself can do any good, since Christ saith, No man can come to me, except the Father, which hath sent me, draw him? Who will glory in his own will, who understands, that to be carnally minded is enmity against God? Who can speak of his knowledge, since the natural man receiveth not the things of the spirit of God? In short, who dare suggest any thought, since he knows that we are not sufficient of ourselves to think anything as of ourselves, but that our sufficiency is of God? And therefore what the apostle saith ought justly to be held sure and firm, that cod worketh in us both to will and to do of his good pleasure. For there is no will nor understanding, conformable to the divine will and understanding, but what Christ hath wrought, in man; which he teaches us, when he saith, Without me ye can do nothing.”

This 14th article of our Confession deals with the origin of man, his fall into sin, and the resultant incapacity to perform what is truly good.

It is refreshing to read this bold and uncompromising statement of faith concerning the origin of man, “We believe that God created man out of the dust of the earth, and made and formed him after his own image and likeness, good, righteous, and holy, capable in all things to will, agreeably to the will of God.”

Our emotions may swing from holy indignation to uproarious amusement as we deal with man’s attempt to explain his origin. One can peruse a textbook on biology or delve into a learned exposition of Darwin’sOrigin of Species to taste a little of this bitter-sweet. Encyclopedias unveil before the reader’s eye colorful charts detailing man’s animal past. If we will do justice to this backward glance, we have to consult two such charts, the first—the classification of animals, the second—prehistoric man.

It is an insult to our God, yet it remains true that man think; that he belongs on the chart which classifies animals. On the very top we find the protozoa (one celled animals) followed by parazoa all the way down to the chordata (animals with a notachord). Some chordata are vertebrates, having back bones. Of these yertebrates, some are mammals (give milk to their young). Of the mammals, some are primates (apes, chimpanzees, and man). Homo sapiens is listed among the primates, yes he is called the most advanced, but he is still classified—animal.

Evolutionists believe that man came from lower forms of animal life. To demonstrate this, they compose another chart, one that depicts man as arising from the ape. You have seen those horrible pictures of creatures half-man and half-ape, supposedly our forebears. They give them nice long names which seem scientifically impressive: Australopithecus Man, who supposedly roamed about a million years before Christ. Yes, there is the Heidelberg Man, 800,000 B.C.; the Neanderthal Man, 30,000 B.C.; CroMagnon Man, 25,000 B.C. At long last we find just plain man!

A representative of this kind of thinking is Desmond Morris, who wrote the popular book, The Naked Ape. He writes on page 17, ff.

The primate group, to which our naked ape belongs, arose originally from primitive insectivore stock. Those early mammals were small, insignificant creatures, scuttling nervously around in the safety of the forests, while the reptile overlords were dominating the animal scene. Between eighty and fifty million years ago, following the collapse of the great age of reptiles, these little insect-eaters began to venture out into new territories. There they spread and grew into many strange shapes. Some became plant-eaters and burrowed under the ground for safety, or grew long, stilt like legs with which to flee from their enemies. Others became long-clawed, sharp toothed killers. Although the major reptiles had abdicated and left the scene, the open country was once again a battlefield. . . .

Somewhere between twenty-five and thirty-five million years ago, these pre-monkeys had already started to evolve into monkeys proper.. . . As time passed, some of these monkey-like creatures became bigger and heavier . . . their tails became obsolete.

This brings us to the last million or so years of the naked ape’s ancestral history, and to a series of shattering and increasingly dramatic developments . . . So the hunting ape became a territorial ape. His whole sexual, parental, and social pattern began to be affected. His old wandering, fruit-plucking way of life was fading rapidly. He had now really left his forest of Eden. He was an ape with responsibilities. . . .

Only by taking a hard look at the way in which we have originated and then by studying the biological aspects of the way we behave as a species today, can we really acquire a balanced, objective understanding of our extraordinary existence.

By conducting such a search, Zoologist Morris believes that he has the key to understanding man as a social creature with all his wonderfully strange behavior. If we only study our monkey ancestry, we can find the explanation as to our present actions as social creatures.

Such a book demonstrates that the wisdom of the world is foolishness with God. If we truly believe Article 14 of the Belgic Confession, we will dismiss all these attempts to understand our present in the light of past evolution as insulting. One who believes in the creation of man has nothing in common with such unbelief. The line of the antithesis is sharply drawn.

The trend within the Christian church today is to find a balance between evolution and creation. Impressed by the seeming proof of man’s evolution and convinced that to remain “scholarly” one has to agree to some extent with the conclusions of modern science, the temptation is to synthesize these two positions into one. Such an attempt is put forth by Bernard Ramm, who likes to be called a progressive creationist. His position is set forth in his book, The Christian View of Scripture and Science. In the section of the book which deals with biology, he writes concerning evolution:

However, evolution is not always set in a materialistic or atheistic or naturalistic or positivistic setting. That evolution has aided antichristian systems of thought no informed person can doubt; but that it has also been turned to other purposes, no informed person can doubt either. There are several forms of a spiritualistic interpretation of evolution. The mistake of Straton (J. R. Straton in his book Evolution, j.k.) is that he bases his entire attack on the antichristian and anti-spiritual interpretation of evolution, or else tries to force all spiritual interpretations into the anti-spiritual mold. This greatly detracts from the cogency of his position; Even more distracting is his high Jegard for Price’s geology and the adoption of the universal flood as the cause of all geological phenomena. (pages 262, 263

His point is that if we are going to be honest in dealing with a criticism of evolution, we have to recognize that some good has come from evolution and it is not allbad. Little wonder then, that he quotes favorably from the Notes on Genesis by Albertus Pieters, when Pieters says:

If a Christian believer is inclined to yield as far as possible to the theory of organic evolution, he can hold that man’s body was prepared by God through such a natural process, and that, when this process had reached a certain state, God took one of the man-like brutes so produced, and made him the first human being, by endowing him with a human soul and a morally responsible nature. . . . In such a conception there is nothing contrary to the Bible. (page 288)

This should enlighten us to understand that progressive creationists certainly do not wholeheartedly condemn evolution, they qualify it repeatedly. They do not say that evolution and creation are incompatible and cannot be reconciled. Ramm makes this plain in his book, pages 290, ff.

What is the real issue in evolution? It is this, is it in its essence antichristian? But this question is based upon a prior one of greater importance: when is any scientific theory antichristian? We cannot answer the former till we have worked out the details of the second. We must not so concentrate on evolution as to miss the essential structure of the relationship between any theory of science and Christianity. Evolution is contrary to Christianity only when it can be shown to be antichristian in essence, and that can only be shown when we can set forth the pattern by which any theory conflicts with Christianity. In order to do this intelligently we must pay some attention to the historical features of this problem.

To do this, Ramm sets forth the following observations: (1) Many theories of science, once declared antichristian are now held by millions of Christians with. no evil effects on Christianity. (2) Further, many scientific theories of every kind are held today by evangelicals and that without controversy. (3) The date of history drives us to the conclusion that a theory is antichristian when it denies something in Christian metaphysics, i.e., when it attacks the very roots of the Christian faith. (4) To which class does theistic evolution belong? Is it a theory that is violently antichristian because it is contrary to the metaphysics of Christianity? Or have we just made a monster out of a balloon? Should we deflate the monster and go our way?

To this he adds:

We have already noted that orthodox thinkers have affirmed that evolution, properly defined, can be assimilated into Christianity. This is a strong evidence that evolution is not metaphysically incompatible with Christianity

This has a direct bearing upon his view of Adam and whether there was any form of man before Adam existed. We shall look into this, D.V., next time. 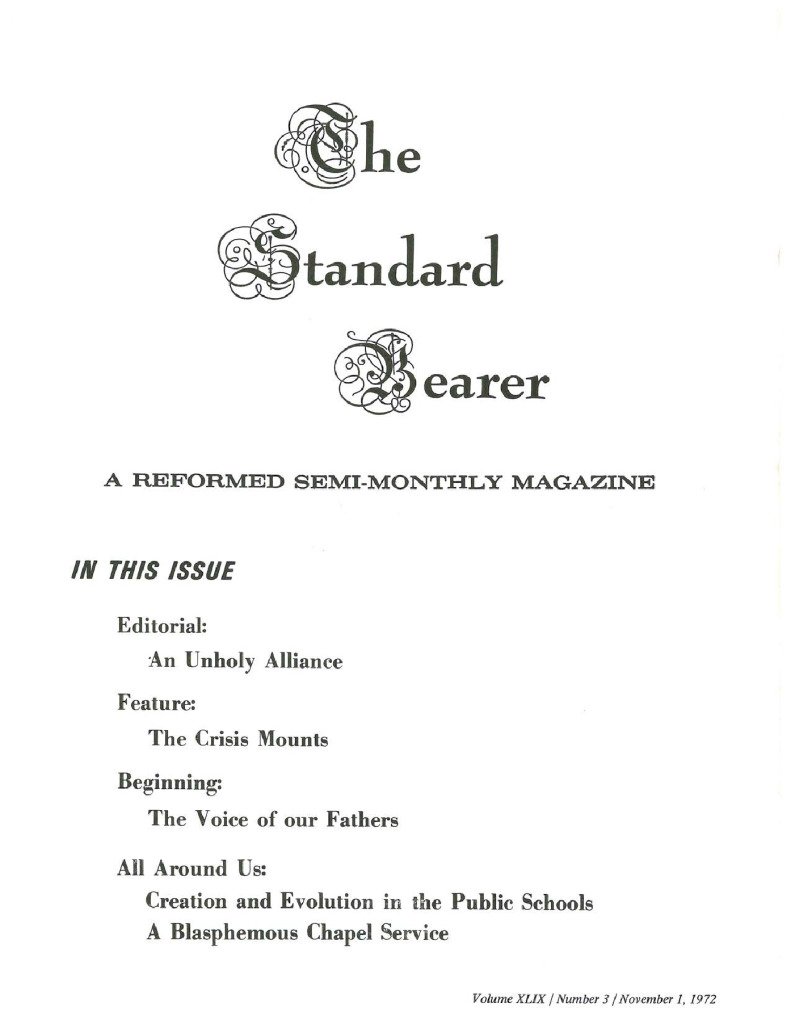