Male and Female Created He Them

There are a few simple but extremely important facts in life that mock at all human self-willedness and scorn all arbitrariness. One of which is the great creation-fact that when God created man, He created them man and woman.

Think these three small words out of existence, and imagine that it would have pleased God to create man after the rule that applies to the angels, of whom Jesus said, that they neither marry nor are given in marriage — and all history, all life, yea, the fashion of the world would be irrecognizable.

Imagine a world of men only, and everything that in barracks, offices, and in great throne gives offense by reason of the absence of what is gentle and tender would weigh on all of our human life with the heaviness of lead. The whole world would be nothing but one great barracks, one endless market-place, one concourse that would never end.

Or imagine a world of women only, and by lack of firmness and strength, endless mobility, softness and tenderness, and the never-ceasing hum of talking lip, making all life seem as a soft undulating sea, with the evening wind dancing and moving upon its waters.

In either case it would be a life without marriage, without family-homes, without brotherly fidelity and sisterly love, without ties of blood, without wooing and repelling, without change and antithesis, one monotonous human sameness.

Of course, we pass the inquiry by, how in that case the child of man would have been created. Why He who created Adam from the dust of the ground and formed Eve from a rib of Adam could not have been able to call us one by one into being without cooperation on the part of the woman and without the will of man.

With conception and birth, as now it proceeds by His ordinance, it is He and always shall be He who creates the soul of every one and “embroiders the body” from the still “unformed substance” (see Ps. 139).

Such a world without distinction of sex is indeed thinkable.

And it has its use, for one moment, to lose oneself in such a world of endless ennui, because nothing lifts us up to praise and thanksgiving more than this, that in reality it is not so, but that God created us man and woman.

But that antithesis should then be taken in its deep sense, and not, as often is the case, exclusively in connection with the body.

It is by no means true that man and woman differ merely by longer or shorter hair, by more or less muscular strength, by greater angularity or more roundness of form.

Thus the distinction between man and woman refers, even first of all, to the soul, the hidden inner being. And that the body differs is not least because the real distinction lies in the body, but also because in the body, if it shall be well, must lie the expression of our inner existence.

He who is not entirely weaned from knowledge of man and faces observes this again and again.

Though we may know nothing of a person, the outward appearance of one will inspire us with confidence and open our heart toward him, and the face of the other, as well as his bearing, will repel us and close our heart against him. Body and soul are strongly distinguished, and it is not true, as reported even among Christians, that our soul itself has formed its own body; and neither can it be said that there is no relation between the two.

God gives to every one his own body, and, apart from sin, every one would have just such a body as would suit his soul and be adapted to his inner existence.

Here, too, sin has come in between the two and worked disharmony.

On the harp of the soul, of man and woman both, strings have been loosened, other have been covered with rust, and some have snapped.

And since with one this went this way and with the other that, the mutual relation at times is so strongly modified that you meet women who make you think of dressed up men, and men who have much in common with a disguised woman.

So sin always does.

It tears us out of our standing. It breaks equipoise. It disturbs harmony.

Hence all the discords that the ear continually catches and that presently pass your own lips.

There is no longer beautiful and pure accord.

It is all become chaos.

It is evident with children, for when they are together you hear more than one girl say that she would rather have been a boy. When they grow up as boys and girls, not infrequently you find a girl who behaves as a boy. And among married women, it is not rare for a woman to think: I will be what my husband ought to be.

And yet, even in this aberration the trace of the divine ordinance still shows itself.

For almost never do you find a boy who wants to be a girl, but the girl a boy; thus in their folly confirming the divine appointment that God created them, not woman and man, but man and woman.

Adam first, and only after him and from him, as his helpmeet, Eve.

For, of course, in that simple statement, “God created them male and female,” there is order.

Where there are two, as long as these two stand side by side as equals, there is neither tie nor junction.

You can plant two poplar trees side by side, but you cannot put two animals together, and far less two people.

To create a tie and a connection between these two, order must be established over both. One must be first, and the other second. Two cannot simultaneously occupy the same place. One stands in the front, and therefore the other stands behind.

With two, one must always have the precedence.

No ship has two steering wheels or prows, but one prow and one rudder, and in the ship each has a place and calling of its own.

In the world of music there are high and low notes, and each as such has its own place and order.

In the world of colors, one color precedes the other.

An ordinance of God for His entire creation, which also applies to man and woman, because God created them male and female. The man first, and after that the woman.

But here, too, sin has worked effects.

With the man, from his precedence to borrow a cause for despotism and to assume an authority to which he has no right, since it is stolen. And on the other hand with the woman, in that she takes no pleasure in the second place according to the rank of order, and is bound to take the first place, which God has withheld from her.

Especially in our days this tendency is strong.

Still to believe that God said to the woman: “Your husband shall rule over thee” (Gen. 3:6), our modern age turns into ridicule.

And in this respect also the harmony, originally ordered by God, and broken by us, shall once be restored, and when in eternity the redeemed shall enter upon that new state in which there shall no more be given or taken in marriage, from the two-sided disposed human heart, after its male and after its female fundamental type, God’s honor shall be changed in purest accord.

Then the subjectivity of the woman to the man shall cease. For that subjectivity is not original in the creation, but follows from God’s judgment after the fall into sin.

Then there shall merely remain precedence, but a precedence like that of Christ to His church, the less to seek self and the more to give self.

Mutual completion. Two halves of one whole that belong together. Fusion and solution of duality in higher harmony.

Of this the prelude can already on earth be enjoyed.

Not in the way of the chivalric gallantry of the Middle Ages, which in semblance elevated woman, only to humiliate her the more deeply, but in the way of Christian wedlock and of the Christian family.

Then from the side of God there is authority over both.

Then both know their own place and have no desire to vacate it, neither will they allow themselves to be driven from it, and the life of faith itself tends to develop in man strength, fidelity, courage; in woman gentleness and tenderness.

So does God’s ordinance provisionally revive again, and begins again to bless the partners in holy wedlock.

Not the married alone. The relation between brothers and sisters also becomes different and better. And in these circles, blessed of God, even the general intercourse and relation of man and woman mutually become measurably again what they should be.

Then the foolish notions of the world lose flavor and taste. Healthy relationships according to the Scripture obtain power again and consecration.

And in the end, both become richer and happier, because they act together again after the ordinance of Him who created us man and woman. 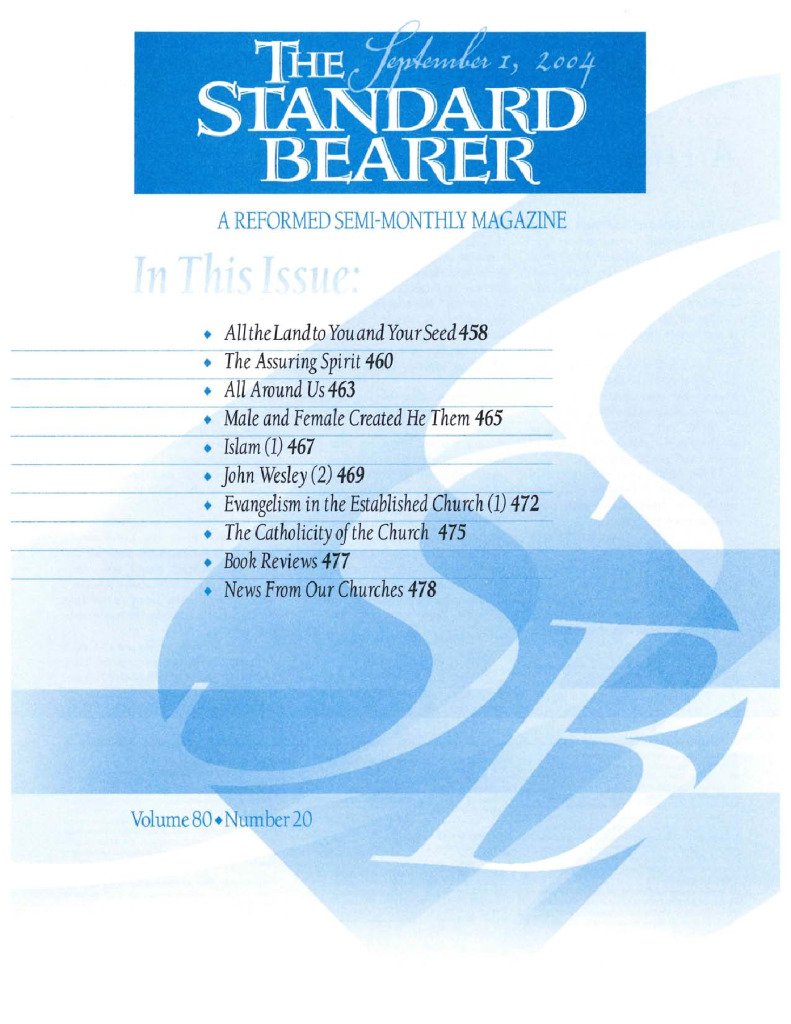