It is a solemn and sacred hour for the Church of Jesus Christ when in her midst individual Christians arise to make confession of faith. For the one making confession it is no less sacred since it seems to mark the climax of one’s life; somehow one feels as if the summit of faith has been reached. Yet, the hour of our confession does not mark the end, but rather the beginning. Hence, the sorrow of the church when there are matured baptized members in her midst who have not confessed their Lord, for it means that these have not yet begun!

However, it seems to be an accepted fact by the greatest majority of those having made or contemplating the making of confession that it marks the end, the goal of their spiritual endeavors. Sorrowing we must admit that it has been that for many. With a sigh of relief, too, many have exclaimed, or secretly thought, after their public confession: “There, at least that is finished.” If they really mean what they say, we only add that theirs was a false confession. Such complacency can only indicate that faith was never present even though confession was made.

The conception that confession marks the end of spiritual endeavors, rather than the beginning, finds its origin in an erroneous conception of the Church and her membership. It is generally thought that one does not become a member of the Church until he has publicly confessed his faith. For this reason, when referring to the public confession of faith, many speak of “joining church” or of being “received by the church.” In other words, as long as public confession has not taken place one is outside of the church.

The terrible results of this conception are easily surmised. It simply means that the non-confessing member is licensed to live and do as he pleases. He has no Christian responsibility of any kind. No church government can frown on his attending the theaters, dances and other places of amusement prohibitive to confessing members. No one will accuse him of walking unruly if he should attend parties and do things which members in full communion may not Ho. No one expects him to live an exemplary Christian life as would be expected of one having made confession of faith.

Naturally this conception of church-membership makes confession of faith difficult for many. They now enjoy pleasures which, so they think, are legal, but which they must renounce as soon as confession is made. Their life is now easy and care-free, but then it will be bound. Now they have no responsibilities at all, then it will be different. Now no one criticizes, then everyone will mark them with critical eye. To add to this terrible state of affairs, many parents are found who more or less adhere to this opinion of youth. When such young folks are officially admonished by the church, father or mother soon add: “It is too bad, but after all they are as yet no full members of the church, and we hope that in the course of time their wild oats will have been sown; we were very little better in our day.”

All such reasoning is due to no other cause than that of a baptized member is considered to have no responsibilities since he is really no Church-member at all. Only upon confession of faith does one “join church” and become one of its members, and only then do the real responsibilities begin. When, therefore, a young man or young woman can overcome the joys and pleasures denied to confessing members and forsake the frivolous ways of youth confession can be made, the battle is then won and the making of confession is then the end not the beginning of the battle of faith.

On the other hand it must be understood that confession of faith is not an act of “joining church”. A child born in the covenant already became a member of a given church when it was baptized in infancy. By baptizing this child that church incorporated it as one of its members. Hence, the child has belonged to that church from the very moment of baptism. However, in Reformed circles Baptism is not considered a form of some local church through which she inducts members into her fellowship. To the contrary, the sacrament of Baptism was given by God and is a sign and seal of the eternal Covenant which He established with believers and their seed. In this Covenant God has promised that He builds His Church of the believers and their seed in the line of generations, and He signifies and seals this very fact by Baptism. Therefore the Reformed parent does not confess that Baptism causes a child to become a member of the church, but he acknowledges: “Although our children are conceived and born in sin, and therefore are subject to all miseries, yea, to condemnation itself; yet they are sanctified in Christ and therefore, as members of His Church ought to be baptized.” (Baptism Form). Hence, they are not baptized to become members of the church, but because they are members, and that by God’s eternal elective grace.

This Scriptural truth ought to abolish all references to confession of faith as an act of “joining church”. It, too, should impress upon every covenant youth that a baptized member has no more license than a member by confession. Neither has a baptized member ethically less responsibility than a member in full communion. Everyone bearing the sign of Baptism is a member of the Church and has the calling to reveal it in life that: “Christ doth wash us in His blood from all our sins, incorporating us into the fellowship of His death and resurrection.” Therefore, “are we by God through Baptism, admonished of and obliged unto new obedience, namely, that we cleave to this one God, Father, Son and Holy Ghost; that we trust in Him and love Him with all our hearts, with all our minds, and with all our strength; that we forsake the world, crucify our old nature, and walk in a new and holy life” (Baptism Form).

Besides this sacrament of Baptism, however, there is a second, namely, Holy Communion. Between these two sacraments stands the making of confession of faith. It must not be supposed that confession of faith separates the two, but to the contrary, it joins them. By making confession of faith access to the second sacrament is obtained, without which the first sacrament, Baptism, with its comforting significance, cannot continue to exist.

The two sacraments together form one complete whole and are signs and seals of the one and the same Covenant of God. Both fix our faith and hope upon the sacrifice of Christ, once offered on the cross, as the only ground of our justification and salvation. Baptism, on the one hand, is the sign and seal of our entering into this Covenant of God, of our being regenerated by the Spirit and being washed in the blood of Christ, and of being incorporated in to His Church. This sacrament can, therefore, be administered to infants. In Holy Communion, on the other hand, fellowship and communion with Christ, through active and living faith, is signified. By an act of conscious faith we must take the bread and receive the cup. Hence, the rightful partaking of Communion requires the ability of being able to know ourselves and so search our hearts and lives that we may rightly discern the body of Christ and eat and drink in remembrance of Him.

It stands to reason that children cannot partake of this sacrament, it requires a confession of faith, of consciousness of being a member of Christ’s body. To attend Holy Communion it must be established by the church, as far as is possible, that those partaking have faith, are conscious members of Christ’s body, and are thus able to partake as Christ has commanded. This takes place when confession is made.

Thus it has become evident that when Covenant youth desire to make confession of faith they do not ask permission to “join church” but before the church, of which they are members by Baptism, they publicly express that it is their earnest desire to take upon themselves the obligations and full responsibilities of their Baptism, and be allowed to partake of the Lord’s Supper as conscious and living members of the body of Christ. They confess thereby that God in His infinite mercy adopted them as His children, and that now, having reached maturity they desire to express in all humility and yet with certainty and in faith that God is their God. When God says: “I am your God,” he that makes confession says: “O Lord, I am Thy servant, the son of Thy handmaid; Thou hast loosed my bonds.” He confesses that God has brought him to the consciousness of being one of His children.

This being the implication of making confession of faith we readily understand that it does not mark the end, but rather the beginning of conscious and active spiritual endeavors and the full life of faith. The solemn hour of confessing Christ in the midst of His Church cannot be closed with: “There, that’s finished,” but with the prayer: “Lord, lead me to the Rock that is higher than I, so that I may do all things through Christ who strengtheneth me.”

He who believes makes confession always again; not only on Sunday but also during the week; not only at home but also in school, in the shop, in the office, in the camps or wheresoever God has called.

This confession will become evident in our attendance of divine worship, in the maintenance of the Church and the Christian School, in our giving to the poor, in the feeding of the hungry, in clothing the naked, in comforting those that mourn, in admonishing those that err, in seeking the ones that stray.

That we may thus make confession we must be trained, thoroughly equipped; not only for a few months before making confession, but from earliest infancy. We must know what it means to say: “I believe” and “I confess.” We must know the Church and her doctrine, her King and His will and thus walk worthy of our calling and confession.

Where there is faith it shall speak! He that believes shall confess! His whole life will be one continual confession; a living, holy sacrifice in Christ Jesus acceptable to the Lord. 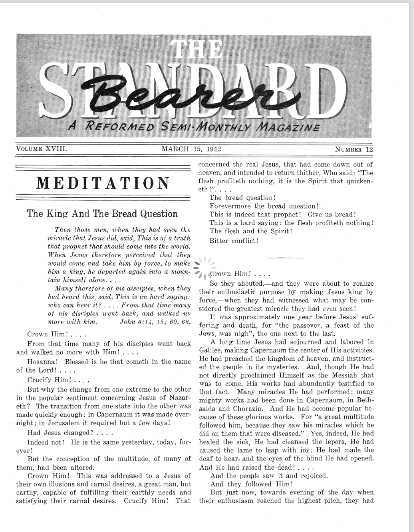