We live in an age in which there is a new hierarchy of rights, with transgender rights currently at the apex. Because of the perceived rights of “sexual minorities,” more and more small business owners feel the pressure. We have already seen Christian bakers, florists, and photographers harassed for declining to service same-sex weddings. Transgender activists are now targeting small businesses also to demand official recognition of their “gender identity.” One controversial case came to light recently, and although Christians will not be affected in this case, for they would not practice such a profession, a disturbing story from Canada shows the direction in which transgender activism is heading.

Jonathan Yaniv calls himself Jessica Yaniv and is seeking a female aesthetician to wax the hair around his private parts. (I am trying to make this report as family-friendly as possible, and I deliberately avoid links to articles because they usually include a picture of Yaniv.) In 2018 Yaniv filed sixteen human rights com­plaints with the British Columbia Human Rights Tribu­nal because the business owners in question declined to provide the service that he demanded. Many of these aestheticians are immigrants from a non-Canadian culture, they work from home, they are married, and they have small children at home. Moreover, as they attempted to explain, they provide their services only to women. Yaniv booked appointments through social media with sixteen of them, using the name “Jessica.” When the aestheticians discovered that Yaniv is, in fact, a biological male, and does not have female genitalia, they cancelled his appointment. They argued that they did not have the training or equipment to perform male beauty treatments, and that their husbands were un­comfortable with them servicing male clients, whereup­on Yaniv sued them for “transphobic discrimination.”

I am not making this up! Time will tell whether the British Columbia Human Rights Tribunal will agree with Yaniv, who argues that businesses should not be allowed to refuse service to transgender people simply because they have religiously or culturally based mis­givings about providing beauty treatments to biological males, even if those biological males identify as females.

This is utter madness. If the issue was whether or not a transgender person should be served in a restau­rant, there would be no problem: one does not neces­sarily have to approve of a person’s lifestyle to serve him or her; but when the service is as intimate as this one is, the right to refuse should be enshrined in law. If the Equality Act, which I recently highlighted in this rubric, becomes federal law in the USA, expect situations like this in the USA also.

On February 4, 2019, Pope Francis, the self-proclaimed head of Christendom (in reality, the head of the false church of Rome), and Al Azhar el-Tayeb, the Grand Imam of Al- Azhar (Cairo, Egypt), a leading figure in Islam, signed a joint declaration in Abu Dhabi, the United Arab Emirates: “Document on Human Fraternity for World Peace and Living Together.”1 The document is not a religious text, although it does decry the increasing secularization and materialism of the modern world, but it is a call to action, akin to the manifesto of a left-wing political party.

The theological basis for this document is the uni­versal fatherhood of God and brotherhood of men, as well as the common grace of God to all men. Since all men are the offspring of one Creator, they are brothers.

“Faith,” begins the document, “leads a believer to see in the other a brother or sister to be supported and loved. Through faith in God, who has created the universe, creatures, and all human beings (equal on account of his mercy), believers are called to express this human fraternity.” Believers do this, continues the document, “by safeguarding creation and the entire universe and supporting all persons, especially the poorest and those most in need.”

The document gives examples of the kinds of needy, vulnerable people who should be the objects of believ­ers’ (by which the document means Christians and Muslims) compassion, and whom governments should be encouraged to protect and help: “the poor, the des­titute, the marginalized…orphans, widows, refugees… victims of war, persecution, and injustice.prisoners of war, and those tortured.” The signatories “call upon. the leaders of the world, as well as the architects of in­ternational policy and world economy, to work stren­uously to spread the culture of tolerance and of living together in peace, to intervene at the earliest opportuni­ty to stop the shedding of innocent blood, and to bring an end to wars, conflicts, environmental decay, and the moral and cultural decline that the world is presently experiencing.”

The document also identifies what Pope Francis and Al Azhar el-Tayeb view as the causes of the world’s ills: “a desensitized human conscience, a distancing from religious values, and a prevailing individualism accom­panied by materialistic philos­ophies that defy the human person and introduce worldly and material values in place of supreme and transcendental principles.” The encroaching secularism—that is, departure from faith in the living God (although the true and living God of Holy Scripture is ab­sent from this document, and is replaced by a deity suppos­edly common to Romanists and Muslims)—“contributes to a general feeling of frustration, isolation, and desper­ation, leading many to fall into a vortex of atheistic, ag­nostic, or religious extremism, or into blind and fanatic extremism.”

While the document refers to God, the deity is refer­enced in the most general terms to avoid offending the religious sensibilities of the pope or the Grand Imam. The “God” of this document is merely the Creator: “The first and most important aim of religions is to believe in God, to honour him, and to invite all men and wom­en to believe that this universe depends on a God who governs it.” The “God” confessed in this document, therefore, is not the God of Holy Scripture, the God and Father of our Lord Jesus Christ, the triune God, but a “god” into which both the pope and the Muslim can pour their ideas of the divine without unnecessar­ily alienating one another. After all, Pope Francis is supposed to confess that Jesus Christ is the Son of God and is supposedly trinitarian in his theology, while Al-Azhar el-Tayeb rejects the divinity of Christ and views trinitarian theology as blasphemy against Allah and his prophet, Mohammed. These differences are, of course, ignored in the doc­ument, lest the whole ec­umenical, syncretistic en­deavour should unravel. In fact, the document, for all its talk of religion, does not mention Christ—not even once.

The document even celebrates diversity as a gift of God grounded in human freedom: “Freedom is a right of every person; each individual enjoys the free­dom of belief, thought, expression, and action. The pluralism and the diversity of religions, colour, sex, race, and language are willed by God in his wisdom, through which he created human beings.” Therefore, forced adherence to religion or culture must be reject­ed. When the document teaches that God “willed” religious pluralism (that is, the coexistence of differ­ent beliefs and religions), it appears to be referring not to God’s sovereign decree (something the pope would view as incompatible with human freedom), but to God’s approval of such divergent beliefs. The “god” of “The Document on Human Fraternity” is tolerant, inclusive, and does not appear to condemn idolatry, seemingly content that his children reach him in differ­ent ways, through Romanism, Islam, or through any other belief system, whether or not it is in harmony with his revealed Word. Indeed, religious fanaticism is condemned in the document: “Terrorism…is not due to religion, even when terrorists instrumentalize it. It is due, rather, to an accumulation of incorrect inter­pretations of religious texts.” “We thus call upon all concerned to stop using religions to incite hatred, vio­lence, extremism, and blind fanaticism, and to refrain from using the name of God to justify acts of murder, exile, terrorism, and oppression.God, the Almighty, has no need to be defended by anyone, and does not want his name to be used to terrorize people.”

Moreover, the document promotes “human dignity,” and is sharply critical of dehumanizing public policy, such as exploitation of the poor, human trafficking, terrorism, the abuse of women and children, and other evils, but it ignores the real source of human misery, namely sin. Obviously, too, the document cannot bring the only comfort and the only deliverance from human misery, which is the perfect satisfaction of Jesus Christ on the cross for sin. The document cannot proclaim the forgiveness of sins to the believer in Jesus Christ, for the signatories do not believe the gospel of Jesus Christ.

Christians certainly op­pose the social ills decried in this document, but we do not expect the church to address them in any of­ficial capacity. The church is not called to eradicate poverty, improve living condi­tions in the Third World, promote equal rights under the law or preserve the environment, which things have their place, but not as the official work of the church. The church, which is the pillar and ground of the truth, has her own work to do: preach the gospel, administer the sacraments, and exercise Christian discipline. When the church neglects her calling, she is tempted to adopt other this-worldly projects that have nothing to do with the mission of her Lord.

The document shows what the pope’s priorities are: not the preaching of the gospel, of which pope Francis, the purveyor of the false gospel of justification by faith and works, and the promoter of idolatry, knows noth­ing, but the establishment of a one-world government and one-world religion with the Roman Church playing a leading role. If Pope Francis can reconcile the reli­gious factions of this world by appealing to their com­mon humanity, he hopes to achieve world peace, that is, an earthly kingdom in which humans flourish, which is, however, not the kingdom of Christ but the kingdom of Antichrist, which will come crashing down when the Lord Jesus returns.

1 The text of the document is available here, https://www.vaticannews.va/en/pope/news/2019-02/pope-francis-uae-declaration-with-al-azhar-grand-imam.html. 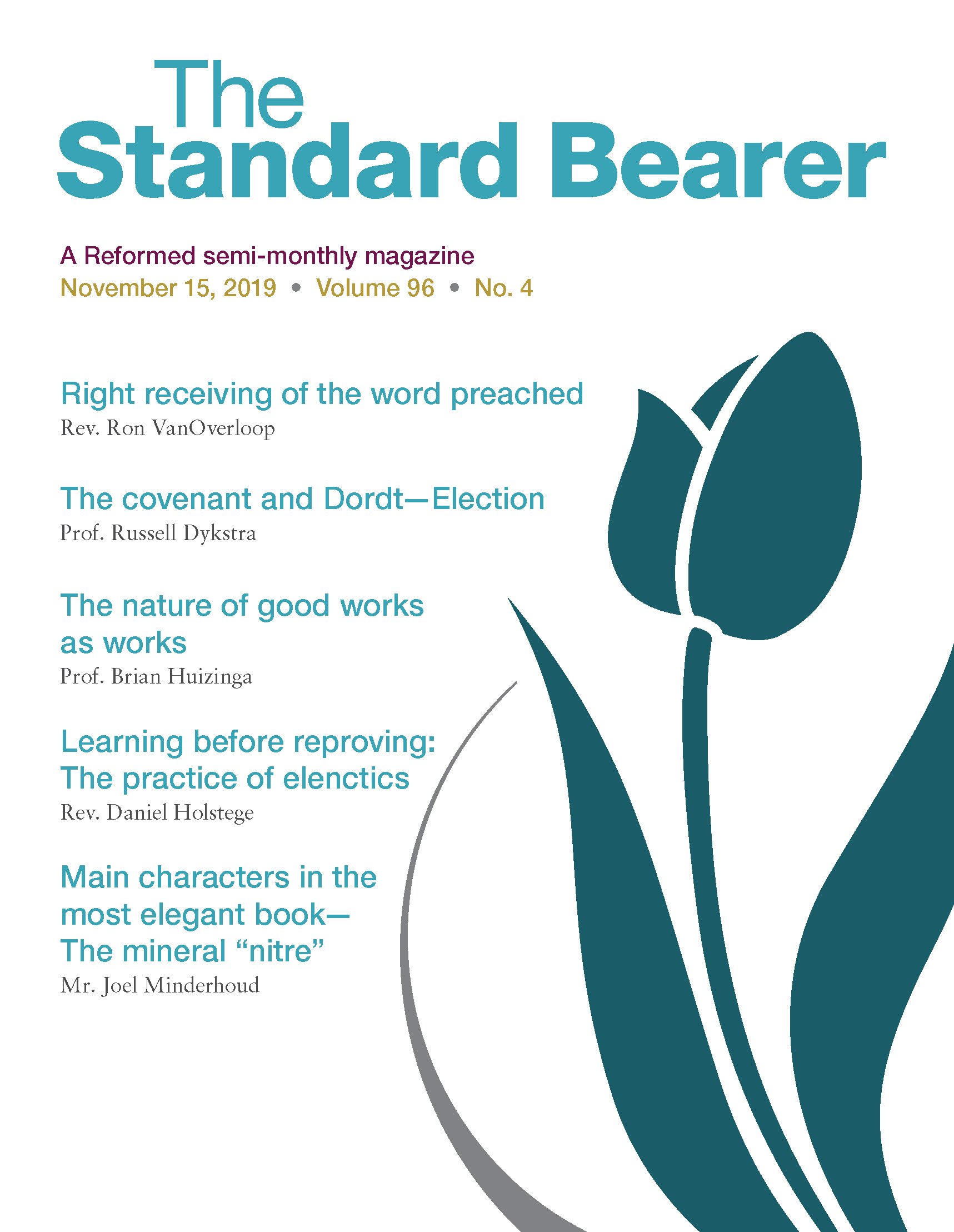