Rev. Hanko is a minister in the Protestant Reformed Churches.

Milking a Ram with a Sieve: Works Righteousness Rejected

Trying to be justified through the Law, therefore, is as though someone who is already weak and sick were to ask for some even greater trouble that would kill him completely but meanwhile were to say that he intends to cure his disease by this very means; or as though someone suffering from epilepsy were to catch the plague in addition; or as though a leper were to come to another leper, or a beggar to a another beggar, with the aim of giving him assistance and making him rich. As the proverb says, one of these is milking a billy goat and the other is holding the sieve.1

Luther means that any talk of works in connection with justification is an attempt to cure man’s disease with the disease itself—to cure his wicked working by more works. How angry he would be, therefore, to find that the majority of today’s evangelicals are doing just that by making faith itself a work. He knew from experience that it could not possibly be so.

There is, then, the teaching, so very common today, which makes of faith a decision or act of a man’s own free will. It suggests that faith, the only requirement for justification, must proceed from man, and it entirely forgets what Ephesians 2:8-10 says about faith. That teaching comes in the guise of well-meant “offers” of salvation, altar calls, decision theology, and such like, and accompanies the notion that salvation, by Christ’s death, is available to all. It is as much the death of all true theology as was the Romish doctrine of salvation by other works.

Luther himself points out the error of this kind of thinking:

The person who believes that he can obtain grace by doing what is in him adds sin to sin, so that he becomes doubly guilty.2

But who can bear this blasphemy that our works beget us, or that we are the creatures of our works? In that case it would be permissible to say, contrary to the prophet, “We have made ourselves, and God has not created us.”

Forde, in his book on Luther’s Heidelberg Disputation, correctly analyzes this modern form of work righteousness. He says:

Theology tries to describe accurately what the situation is, but in the fallen world descriptions always turn into prescriptions. Then they become deadly, especially when they turn up in sermons! So, talk of humility, or faith, or grace tends invariably to slip over into prescriptions for what we are to do to make ourselves as humble as possible, or to get some faith, or to decide for grace, and so on. In the theology of the cross, however, the point is that the language is to be used in such a way that every prescription is cut off…. Thus the important question of whether or not humbling oneself or falling down and praying for grace is “doing something” can only be turned back on the questioner: “When you humble yourself and plead for grace, are you making the claim that you are doing something? If so, you are not pleading for grace, but only your own cause. And so you are still lost. Give up and believe the gospel!”4

Like a Beast Between Two Riders: The Bondage of the Will

Faith cannot, therefore, be an act of man’s will, a decision for Christ or a choosing between God and Satan, between salvation and damnation, between heaven and hell.

It is at this point, therefore, that Luther differs the most from modern Christianity. The church today, for the most part, has gone back to the doctrine of Rome and Erasmus, against whom Luther wrote his most famous work, the work from which we have just quoted. The sad thing is, of course, that the modern church has not only gone back to Rome’s doctrine of the will, but is, as a result, on its way back also to Rome’s doctrine of justification as well. There are prominent evangelical leaders like James Packer who cannot distinguish between Rome’s doctrine and that of historic, biblical Protestantism.

Modern Protestantism’s doctrine is not exactly the same as Rome’s doctrine of justification by works, but it is much more subtle and dangerous than that of Rome. It is the teaching that salvation is of man’s willing, where Rome teaches that it is of man’s running (Rom. 9:16), both just different forms of what Luther considered blasphemy.

No Holidays: No Faith without Works

By way of emphasizing that faith is not another work, but a gift of God, Luther often said that we have nothing at all to do in our justification:

He is not righteous who works much, but he who, without work, believes much in Christ.

The law says, “do this,” and it is never done. Grace says, “believe in this,” and everything is already done.6

In spite of the fact that some of Luther’s own associates misunderstood him and fell into anti-nomianism and libertinism, denying good works altogether, Luther himself never had any sympathy for such teaching. Though we, said Luther, have nothing at all to do for our justification, there is much that we do as a result of justification:

For it (faith) surely must not be such a sluggish, useless, deaf, or dead thing; it must be a living, productive tree which yields fruit. Therefore this is the test, and this is the difference between faith that is genuine and faith that is false and colored: where faith is true, it manifests itself in life. A false faith, to be sure, bears the same name, employs the same words, and boasts of the same things; but nothing results from it.7

How few there are today who are so taught of God—who can stand firmly against all efforts to make of faith another work, but who can also stand against those who think that any mention of works is a denial of grace.

The Only Organs of the Christian Man: Faith by Hearing

In his desire to preserve the doctrine of free and gracious justification, justification by faith alone, Luther emphasized very strongly that the chief action of justifying faith is to hear the Word. The Christian, for Luther, is in the most literal sense “all ears”:

But the word “ears” is emphatic and forceful to an extraordinary degree; for in the new law all those countless burdens of the ceremonies, that is, dangers of sins, have been taken away. God no longer requires the feet or hands or any other member; He requires only the ears. To such an extent has everything been reduced to an easy way of life. For if you ask a Christian what the work is by which he becomes worthy of the name “Christian,” he will be able to give absolutely no other answer than that it is the hearing of the Word of God, that is, faith. Therefore the ears alone are the organs of a Christian man, for he is justified and declared to be a Christian, not because of the works of any member but because of faith.9

Timothy George suggests that: “Fides ex auditu, ‘faith out of hearing,’ ‘faith by means of listening,’ is perhaps the best summary of his Reformation discovery.”10

Why did Luther place so much emphasis on hearing the Word, to the extent at times of identifying faith and hearing? The answer seems plain. On the one hand, Luther wanted to make it as clear as possible that faith is from God and not from man himself. If it comes by hearing, it must come from God. On the other hand, over against the idea that faith was some kind of substitute work, Luther emphasizes in this way the “passiveness” of justifying faith. It works nothing; it only hears. The Christian man, the believer, is all ears.

Plagued by the Devil: The Necessity of Being Justified

Because he himself had learned the truth of justification through long spiritual searching and struggling, Luther insisted that only those who are in fact justified by faith and who by faith knew Christ and had taken refuge in Him could understand and receive the biblical doctrine of justification. Any other faith than true justifying faith is no faith at all and cannot profit:

I say that, if we are ever to stand before God with a right and uncolored faith, we must come to the point where we learn clearly to distinguish and separate between ourselves, our life, and Christ the mercy seat. But he who will not do this, but immediately runs head-long to the judgment seat, will find it all right and get a good knock on the head. I have been there myself and was so burnt that I was glad I was able to come to the mercy seat.11

Luther has reference here, of course, to faith which thinks itself self-produced, and which believes itself to be “doing something.” Such faith cannot find the mercy seat—cannot find Christ—and only gets “knocked on the head.”

Not only was Luther’s love for the doctrine of justification the result of his own experience (it was for him, as we have seen, the “gate of paradise”), but his opposition to any hint of work righteousness was also the fruit of his own spiritual struggles. He knew the spiritual danger posed by false doctrine to deceitful human hearts:

Whoever is interested may learn a lesson from my example, which I shall now confess. A few times—when I did not bear this principal teaching in mind—the devil caught up with me and plagued me with Scripture passages until heaven and earth became too small for me. Then all the works and laws of man were right, and not an error was to be found in the whole papacy. In short, the only one who had ever erred was Luther. All my best works, teaching, sermons, and books had to be condemned. The abominable Mohammed almost became my prophet, and both Turks and Jews were on the way to pure sainthood. Therefore, dear brother, be not proud or smug, and certain that you know Christ well. You hear what I confess to you, admitting what the devil was able to do against Luther, who is supposed to be a doctor in this art, who has preached, composed, written, said, sung, and read so much in these matters but must still remain a student and sometimes may not be either master or student. So take my advice, and do not celebrate too soon. Are you standing? Then see that you do not fall.

He pointed out, too, that not only the believer, but the church must ensure that it does not lose this doctrine:

If the article on justification hadn’t fallen, the brotherhoods, pilgrimages, masses, invocation of saints, etc., would have found no place in the church. If it falls again (which may God prevent!), these idols will return.13

How many churches, once standing, have begun to fall through loss of this doctrine in the teaching of the church and in the consciousness of its members. May we stand. 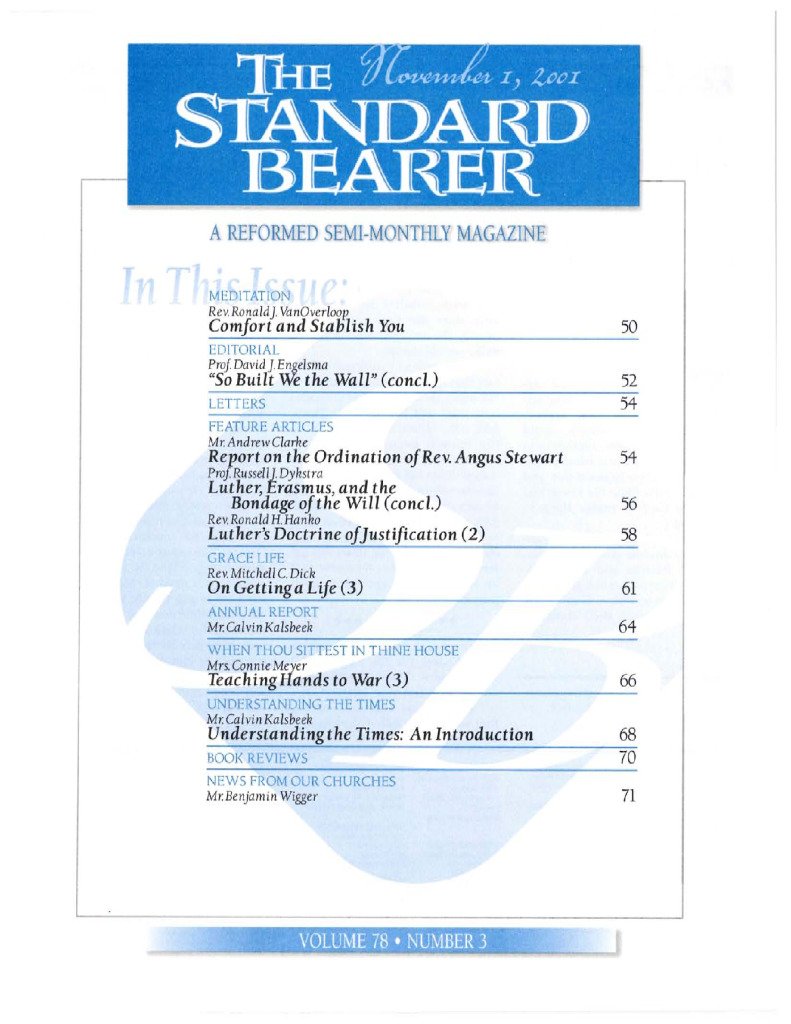