Luther and the Church

Luther was not a systematizer of doctrine. Unlike Calvin, he did not write an Institutes of the Christian Religion or his own dogmatics. Many of his works are polemical, written in the heat of the battle. Luther simply did not have time to engage in the quiet scholarship of a systematic theologian. This makes the task of seeking to define Luther’s doctrine of the church—or, for that matter, Luther’s doctrine of anything—a challenge. Luther’s Works are voluminous, but none of them is devoted to pure ecclesiology.

Nevertheless, we can identify some characteristics of Luther’s ecclesiology.

First, Luther was clear on the nature of the church. The medieval papacy defined the church as the pope and his clergy. The Roman church, therefore, was a hierarchical institution. Indeed, the common people as such did not constitute the church. In opposition to this, Luther viewed the church as the spiritual body of Jesus Christ made up of believers. In fact, insisted Luther, if the pope and his clergy are not believers (which is entirely possible, for Luther viewed the papacy as Antichrist), they are not the church at all. In 1537, Luther wrote in the Smalcald Articles, “For, thank God, [today] a child seven years old knows what the Church is, namely, the holy believers and lambs who hear the voice of their Shepherd” (Part III, Art. XII). Elsewhere, in his Large Catechism, he wrote, “I believe that there is upon earth a little holy group and congregation of pure saints, under one head, even Christ, called together by the Holy Ghost in one faith, one mind, and understanding, with manifold gifts, yet agreeing in love, without sects or schisms” (Art. III).

What to us is obvious was to the ecclesiastical world of Luther’s day revolutionary: the church is the company of believers (and their children), or, as the pre-Reformer Jan Hus had expressed it, “the church is the company of the predestinate.” Such a definition of the church, when believed, was a deathblow to the pretensions of the Roman See. No wonder Luther was labeled a Hussite or a Bohemian heretic (Hus was from Bohemia)!

Second, Luther was clear on the attributes of the church. What Luther could retain from the ecclesiastical tradition that preceded him, he retained, if it was in accordance with the Holy Scriptures. Luther believed what Christians in every age have confessed in the Apostles’ Creed: “I believe one holy, catholic church.”

Luther did not deny, or even attack (as his opponents alleged) the unity of the church. Luther never intended to create a second church to rival the Roman church. Luther denied that the Roman church was the church. It was, and had become, a wicked, degenerate counterfeit of the true church. What Luther did (and what Calvin and the other Reformers did after him) in establishing congregations on the basis of the Word of God was to continue the one church of Jesus Christ. Luther’s close friend and ally, Philip Melanchthon, wrote in the Augsburg Confession,

The Holy Ghost effects our sanctification by the following parts, namely, by the communion of saints or the Christian Church, the forgiveness of sins, the resurrection of the body, and the life everlasting; that is, He first leads us into His holy congregation, and places us in the bosom of the Church, whereby He preaches to us and brings us to Christ…. I believe that the Holy Ghost makes me holy, as His name implies. But whereby does He accomplish this, or what are His method and means to this end? Answer: by the Christian church…. But outside of this Christian church, where the Gospel is not, there is no forgiveness, as also there can be no holiness (Large Catechism, Art. III).

In his commentary on Psalm 118, he writes:

Rome boasted in the church’s catholicity, by which she meant one hierarchical center (the Roman See) from which the “Vicar of Christ” ruled over all churches and all peoples. Luther rightly rejected this, for the Catholic Church is not where the pope rules (where Peter is, as Rome expressed it), but where Christ is, whether in Wittenberg, Germany; London, England; or Zurich, Switzerland. (Had the church spread further in Luther’s day, he would undoubtedly have included places in the Americas, Africa, and Asia, for example). “Where Christ is not preached, there is no Holy Ghost who creates, calls, and gathers the Christian Church” (Large Catechism, Art. III). To turn that around, where Christ is preached (wherever that might be), there the Holy Ghost does create, call, and gather the Christian church. It is precisely because Christ is not preached under the papacy that there is no church there, her boasts of unity, holiness, catholicity, and apostolicity notwithstanding.

For Luther, the church was much more important than it seems to be for many modern evangelicals, many of whom despise the church by living in isolation from it. Carl Trueman explains: “For Luther, however, the idea that private Bible study might be a universal staple of the Christian life would have been bizarre: after all, few of his parishioners would have been able to read, even if they could afford a book.”2 “Luther’s piety was rooted in the gathering of the church, in the Word preached more than the Word read, and in the sacraments of baptism and the Lord’s Supper.”3

The preaching of the gospel was for Luther primary in the church, for in the preaching of the gospel the believer was confronted with Christ. Indeed, such a confrontation did not take place in the private reading of the Scriptures, at least not to the same degree and with the same effect. For Luther, this had important pastoral implications. Again, Carl Trueman beautifully sets forth the views of Luther: “The person whose life is falling apart and who is tempted to despair needs to know Christ, and knowing Christ requires knowing who he is and what he has done.”4 He will hear who Christ is and what Christ has done in the preaching in the true church. He will not hear it at home, and he certainly will not hear it in the false church.

One could imagine a person seeking Luther’s advice for, say, struggles with assurance. Luther’s first question of him would almost certainly be, “Are you going to church to hear the Word and receive the sacrament?” If the answer came back in the negative, it is safe to assume that Luther would send the person away to attend church for a few weeks before he would consider giving him individual counsel. If the person had excluded himself from the objective means of grace, not only would spiritual problems be expected, but also Luther could really offer nothing else to help him.5

Let that be a warning (and an encouragement) to the struggling saint who is tempted to forsake the means of grace today!

Finally, Luther loved the church. His great grief was to see what he called the “Babylonian Captivity” of the church, and his great desire was to see the church restored to her biblical foundations. Above all, Luther saw himself not as a mighty Reformer, or even as a great spiritual leader, but as a humble yet thankful member of the church:

I want to be and remain in the church and little flock of the faint-hearted, the feeble, and the ailing, who feel and recognize the wretchedness of their sins, who believe in the forgiveness of sins, and who suffer persecution for the sake of the Word which they confess and teach purely and without adulteration.”6

That, too, is our thankful confession. We love the church, for in the church we find Christ. 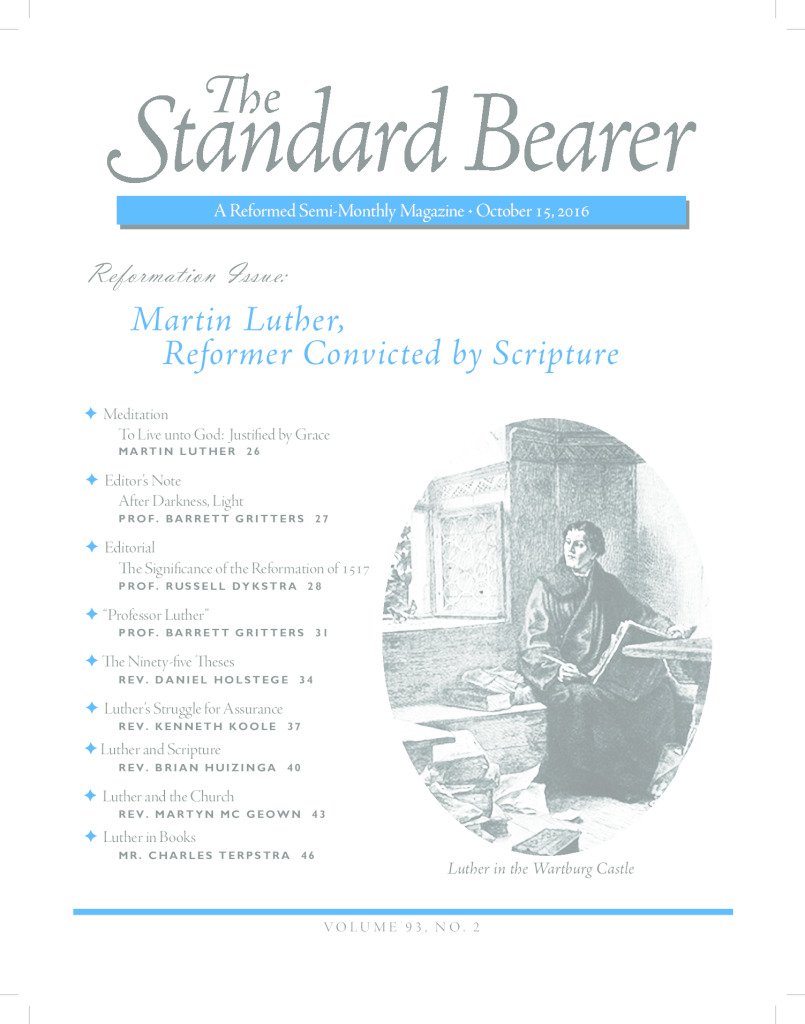