Looking To The Future. Chapter 2: The Teacher Problem (As to Teachers Qualified for Prot. Ref. Schools)

Looking To The Future. Chapter 2: The Teacher Problem (As to Teachers Qualified for Prot. Ref. Schools)

In the present article, I believe, we touch on what is undoubtedly the most important aspect of the whole teacher problem for our Protestant Reformed Schools. And because the teacher is such an integral part of the school, we therefore also touch on the most seri­ous and fundamental question in all our efforts to­ward a Protestant Reformed educational system, viz. how shall we make and keep our schools Protestant Reformed? Hitherto in this series of articles we have treated only what we may call the formal, mechani­cal aspects of the teacher problem. In the present essay we deal with the material side of the problem. In other words, we indeed must procure teachers; and we must also work toward the maintenance of permanent teaching staffs, as much as possible. But we must above all else have Protestant Reformed teachers.

The Importance of the Problem

In order to see the importance of this matter, we must remind ourselves that the important, the essen­tial aspect of any school is in the instruction. Not the physical plant,—the building, the benches, the books, the paper,—is essential. You could have a school, if need be, without these after all. But a school without instruction you cannot have.

From this it follows, of course, that you cannot have a school without teachers, who are the instructors. It is true that in some cases a pupil can instruct himself with the aid of books; and then you have a “self-taught man”. But a school, properly speaking, consists of instructors and instructed, teachers and pupils, those who give instruction and those who re­ceive instruction. This idea, that the teacher must give instruction,—which it seems to be self-evident and almost axiomatic—is nevertheless a principle which we must not forget. A school is not an in­stitution in which the pupils simply learn what they want to and from whatever source they want to while the teacher is simply a sort of overseer or foreman, whose duty it is only to see that the pupils learn some­thing, whatever it may be. We must be extremely critical of such a conception of a school, not simply from an educational point of view, but on the basis of Scripture. The Bible teaches us that it is not merely our duty to let our children learn something, but that it’s our calling diligently to teach them the precepts of the Lord and to train them in the way that they should go. The Christian must have nothing of “progressive education.”

Now this parental task of instructing our children is, to a large extent at least, transferred to the teacher, who is engaged by an organization of parents to teach their children. The teacher must instruct the children in wisdom, the principle of which is the fear of the Lord.

This is also the reason why our Protestant Re­formed parents insist on their own schools. We be­lieve that in our Protestant Reformed truth, which is the Reformed truth, we have the pure and un­adulterated principles of true wisdom, undefiled by any of the corruption of worldly wisdom, the true and pure delineation of the fear of the Lord, according to the Scriptures in which alone that fear of the Lord is revealed. And in that unadulterated wisdom, not a mixture of the wisdom of God and the foolishness of the world, we want our children instructed. That is our calling.

What follows from this?

In obedience to that calling some of us (many more of us should, and should do so without further delay!) have established our own schools. We have organized societies, conducted drives, built our school buildings (and in some cases are busy expanding them already), engaged a teaching staff, and sent our Protestant Re­formed little ones off to school.

All of this is to be commended, and I would be the last to condemn it.

But is this all? And is it enough?!

We are inclined, I sometimes fear, to answer in the affirmative. We have separate schools. We have Protestant Reformed men and women to teach our children. We can now successfully eliminate many of the features we always fought in the existing schools. We shall have no off-color hymns sung in our schools. The Bible instruction will not be colored by the Arminian error of the First Point of 1924. We can now prevent the rendition of bad programs and plays, and the showing of corrupt motion pic­tures. We need no longer subject our children to the teaching of semi-evolutionist science teachers. We have Protestant Reformed schools!

And should we ever do that, we would make a very serious mistake. I would almost dare say that then the whole movement isn’t worthwhile. We hardly need schools of our own merely for that. We do not merely need a school which provides correct Bible in­struction. That is only a small part of the school—a part which could even be left entirely to the church and home. It is commendable, to be sure, that if our children receive instruction at school in Bible or Church History, it be correct. And by correct I mean Protestant Reformed. But if we stop there, we fail miserably. What about the rest of the instruction? Must that be neutral? Must it be instruction in world­ly wisdom? Must history, for example, simply be in­struction concerning facts and events? Or must it be instruction in the significance of events far more? And who must say what is the significance of events? Man? Or God? Must then our own schools be institu­tions in which our children receive instruction in doc­trine? No! It is the duty of the church to instruct in doctrine. And let our schools forever leave all instruc­tion in doctrine to the catechism room and the pulpit. There it belongs. But our school must be institutions in which our Protestant Reformed principles (or doc­trine, if you will) are applied, and that too in the en­tire curriculum.

Let us remember that, and never rest until and unless we have such schools.

What is a Qualified Teacher?

I answer: not necessarily.

And I hasten to add that by my answer I do not mean to put any of our teachers under a cloud. My answer does not mean that I do not believe that the men and women who teach in our schools are Protestant Reformed, that they agree with our doctrine 100% and that they also strive to live according to that doctrine. If I had good reason to believe that of anyone, be he a teacher or not, I would follow another course than that of publishing it in our Standard Bearer.

And I have good reason to believe that such teach­ers as yet are rather rare, through no fault of their own. My reasons are these: 1) In my personal experience, in the erstwhile Teachers’ Club in Grand Rapids, of which the Rev. Ophoff and myself were co-chairmen at one time, I found that not many of our teachers and prospective teachers were of such caliber, or showed much ability to apply our principles. They were receptive to instruction in a Protestant Reformed view of history, for example. But to de­velop something themselves was another story. This also was through no fault of their own. Most of them, if not all, were trained in a Christian Reformed college, where, certainly, they would not be taught to apply Protestant Reformed principles in the field of education. 2) None of our teachers has had a Pro­testant Reformed teacher’s training course. That is simply a fact. Many have gone to Calvin College. Others have been trained elsewhere. And who, unless he is of unusual ability, can be a Protestant Reformed teacher without Protestant Reformed teacher train­ing? 3) It is not everyone’s work, nor everyone’s calling, to develop such a Protestant Reformed cur­riculum. It is not even every teacher’s work. To be a teacher or to be an educator are two different things. You cannot simply say to every teacher: “You sit down and develop a history course along Protestant Reformed lines/’ We need teachers who are able to give Protestant Reformed instruction, and therefore we need teachers who are themselves trained to give it. And therefore we need educators who will furnish such teacher training. 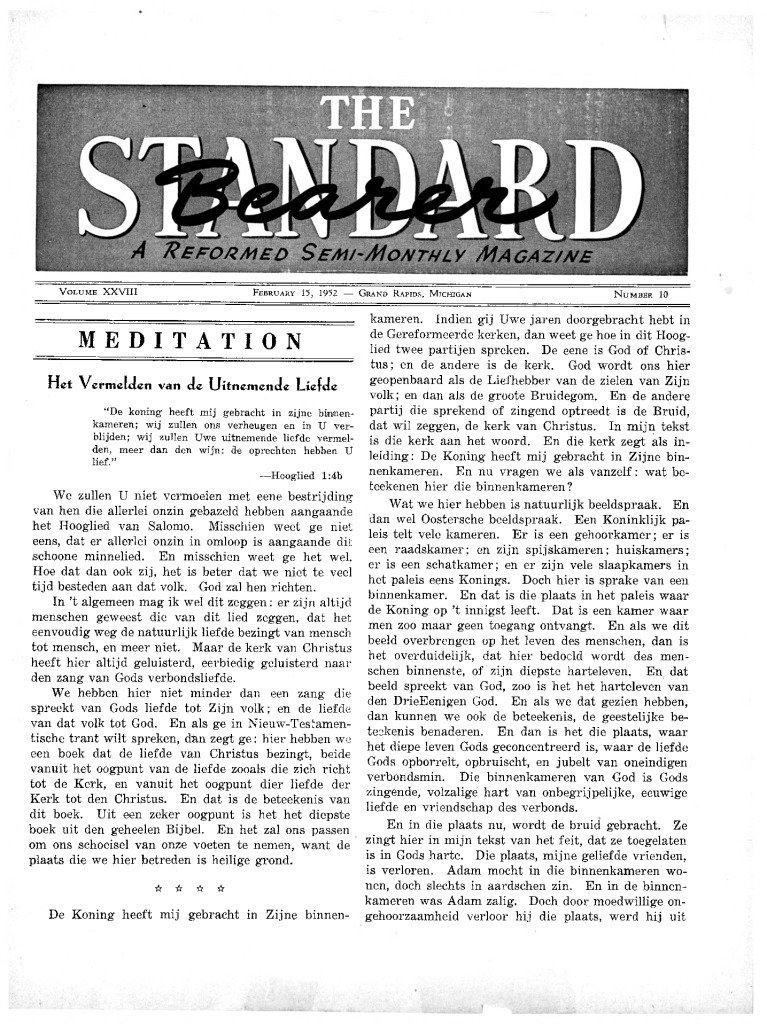