Let us look at this truth from the point of view of Galatians 5:1. “Stand fast therefore in the liberty wherewith Christ hath made us free, and be not entangled again with the yoke of bondage.”

The apostle Paul was the minister of God to the Gentiles. Through Paul and his helpers God was bringing to the Gentiles the glorious gospel, the gospel of liberty.

Paul first proclaims unto them bondage. That is one emphasis of the message that he comes with. You are in bondage, he teaches them. There is a universal bondage that grips all mankind. The apostle deals with that in all of his letters to the churches. The apostle Paul in Romans 5:12 identifies the very source of that bondage through the sin of one man, Adam, in the beginning. That fall of Adam brought upon all men without exception a universal, a total, a horrible bondage: the bondage of sin.

Even though God had created man good and upright so that he had the ability and right to serve God, yet through man’s own willful disobedience he lost that right. The image of God in which he was created was turned into the very opposite. Rather than to stand before God in righteousness and holiness and true knowledge (which is the image of God) he now stands in enmity and unrighteousness and ignorance. He has been reshaped into the image of Satan in sin. His mind which was once filled with the righteousness of God is now filled with a horrible darkness. The freedom of righteousness which he once had, to go about in the creation as king under God, is now a horrible trembling in expectation of judgment, and justly so because God is angry with sin and the sinner. That Paul preached. He preached God. He preached God as the holy, just Judge of heaven and earth Who will not lightly pass over sin. He preached that man was in a horrible bondage; but thanks be to God, he also preached the way out. He preached Jesus Christ and Him crucified, Him risen for the salvation of sinners hopelessly bound in the bondage of sin.

There is only one way, the Way, the Truth, and the Life, Jesus Christ. The way out of sin is by the sovereign, powerful grace of God, whereby He takes the heretofore dead sinner and with the miracle of regeneration He quickens him, makes him alive so that he is born again. Now that sinner has been relieved of that bondage of sin and corruption. He has been renewed again into the image of Him that created him. So that once again he has the beginning of the ability to serve God, and that is freedom. The right and the ability to serve our God in thanksgiving. That is the essence of the gospel which Paul preached to the Galatians. They received that gospel willingly. They rejoiced in the reception of that gospel; and not only that but they made application of that gospel in their lives. Paul says in Galatians 5:7, “Ye did run well, who did hinder you that you should not obey the truth?” Something happened! Something terrible happened.

Now, what happened was this. There were certain Jews who were listening to Paul’s gospel and who were saying, yes, that is good news. . .but. They were saying, yes, what we hear Paul saying is the fulfillment of the Scriptures. . .but. But don’t forget what Moses said. Don’t forget all the traditions which we have been taught. Don’t forget those laws and regulations, because they lead us to holiness, do they not? They were saying, You believe in Christ now? That is good. But now that you believe in Christ, come with us and we will increase your understanding of these things. Submit yourselves to circumcision first of all, and then we have a few other regulations that we consider to be very important. We want to add to what Paul says.

Paul had preached freedom from sin through faith in Christ Jesus alone. Justification by faith only, Paul taught, but they said, yes, justification by faith and by walking in the good law of Moses, God’s law. But Paul said, No! Paul said that that is a reintroduction into bondage. Paul would have nothing of Christ-and, or Christ-but. Paul would have Christ only as our liberty. “For liberty Christ has freed us” is the literal idea of our verse. For liberty unto liberty has God freed us from bondage, and now in no wise allow yourselves to be “had in” to the bondage of the law. The literal idea of “entangled” is to be “had into.” The idea of it is that which grabs hold of one and pulls one down. “Entangled” is a good word to express the idea.

They had been freed from that awful universal bondage of sin, but Paul warns that these men came to introduce a new yoke of bondage. The law with its regulations as it was required by these Judaizers.

There is a fine line that we have to understand with respect to the law. In certain places Paul says that the law is good and in other places he rejects the law categorically as though we have in the Scripture two opposing views of the law, which of course, is not the idea.

The idea is this. In the old dispensation the law was used by God as an external code that was placed upon the people so that, as they worked under the law and tried to grapple with the perfection of that law, they always came to the conclusion that they could never fulfill it. Then in desperation and yet in faith they cried out, “Oh God be merciful to me the sinner.” Then God caused them to hear the blessedness of the promise of the old dispensation. God said in effect, I know your difficulties. Take for yourselves a lamb and bring it to the priests. The priests will slay the lamb and will offer the lamb upon the altar, and when I see the blood of that lamb I will pass over you. I have heard your cry; I will no more remember your sins against you. That lamb was a picture of none other than the Lamb of God which taketh away the sin of the world, Jesus Christ.

In the Old Testament that law had a distinctively external character. Now that law continues. That same law. God’s expression of perfect holiness and righteousness continues into the new dispensation. No longer, however, is it a crushing external burden which was a yoke of bondage.

Now by the work of God’s grace and Holy Spirit the principles of God’s law are written in our hearts—not upon the tables of stone, but upon the fleshly tables of our hearts. Those laws are infallibly inscribed in the blood of Jesus Christ so that God by His grace binds His laws upon our hearts and upon our minds. Now our whole perspective is different. If we be in Christ Jesus we are new creatures. Old things have passed away and behold all things are new. That is right. The law in its damning bondage is passed away for the redeemed sinner. The law now written in our heart is a guide to thanksgiving, obedience, and holiness to the Lord that saved us.

That is how we must understand the law in the new dispensation. We are not without the law. We are not against the law, but we are “in the law” through Jesus Christ.

What difference does that make, you may ask. It is still law, isn’t it? Oh, a world of difference it makes. It is like the difference of a little child who does not want to do the dishes. The child begins to grumble and to weep and to stew. Finally the external law has to be applied, and the child finally submits. Unwillingly and grudgingly the child goes through the task. Finally the child finishes and says, “There, now I have fulfilled the requirements of the law.” But what a grievous thing that is. How much better it is (and this is the goal, the ideal, of the New Testament child of God who has become free and mature in Christ Jesus) when the parents tell (the law) the child to do the dishes and the child responds willingly and obediently. Now what a difference that makes! A whole difference in attitude and in motivation. The whole situation in the household is different when there is an inner willingness to walk in God’s way. That is where we are in the New Testament by grace in Christ Jesus.

To present the way of holiness and obedience to the New Testament Christian as the way of regulations, of external codes—do this and don’t do that—is to present a way that leads to bondage. Paul says, You have been freed, you have been delivered, you have been liberated. Now stand fast in that liberty and do not become entangled in the yoke of bondage. Don’t do that to yourselves through immaturity. Don’t allow these Judaizers to do that to you. Resist them steadfastly. “Stand fast in the liberty wherewith Christ has made us free.” Christ has liberated us unto liberty—not so that we should become free to be entangled again into regulation of anyone else except the Lord Christ.

The Judaizers of Paul’s day were trying to entangle the Christians in a new yoke of bondage. That is why we see Paul contending so fiercely against those who would reintroduce the law as an external code.

Those attempts have continued throughout the ages. There are always those who would seek to add to or to take something away from the Word of God. Each of us has that inclination or tendency within us. We like to have everything all neat and orderly. Our children say, What can we do, and we like to say, You may do this, this, and this, but not this, that, or another thing. Then we know and the children know where the law is. That may work for immature children, but that is not the ideal nor the goal for the child of God who is coming to the full stature of the new man in Christ. To want to have everything so carefully defined is really a basic immaturity. We have not yet begun to dare to walk in the freedom of the Spirit wherewith Christ has made us free. We like to have some external “guide bars” to help us because we feel so secure with them. But, lo and behold, those “guide bars” become for us a prison of bondage. We must be finished with external guide bars. We must strive to live out of the principle of freedom and thanksgiving of the new man in Christ.

Is that easy? Oh no, that is not easy. That is a very difficult calling, and that is why we revert so quickly and say, Just tell me what to do and I’ll do it. Don’t bother me with all the latitude that the Word of God allows. I am not a theologian, after all. I am not able to distinguish the way. But God says, I have given you the Spirit. I have enabled you by grace to know the way. You need not an instructor. You have an instructor in your hearts. Go to the Word. There is the guide for thankful, holy living. The Spirit of God within me, testifying with my spirit guides me and shows me the boundaries and also makes me willing to walk in them. 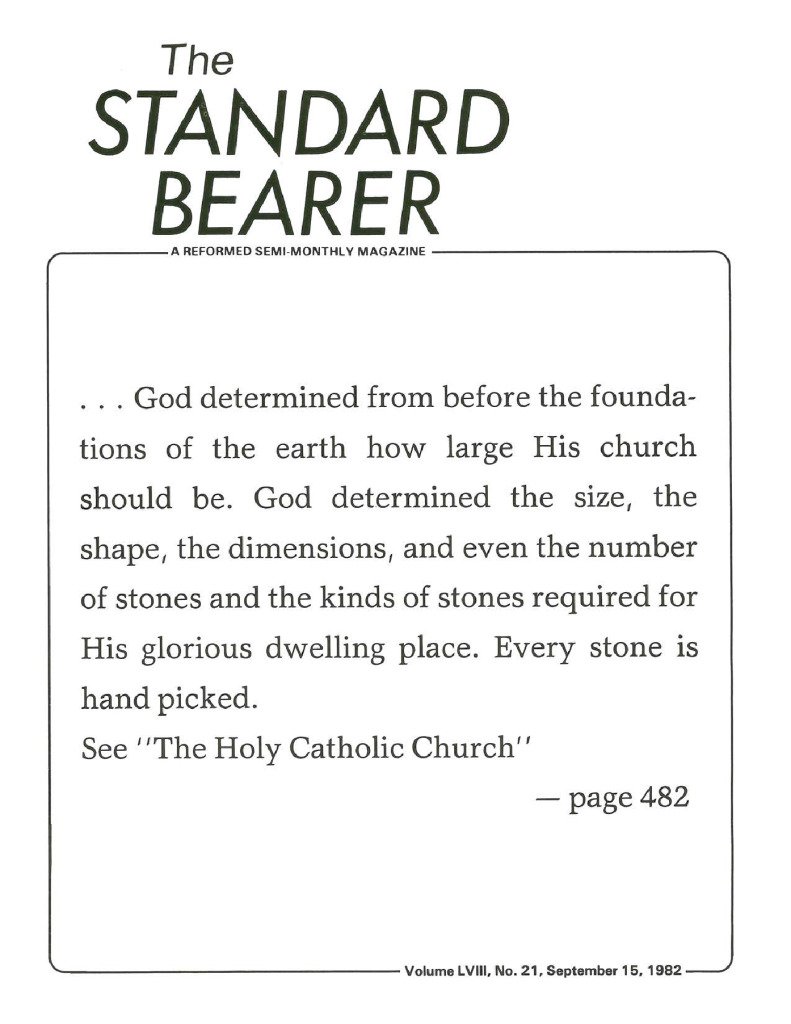