“Verbal inspiration of Scripture is only a theory and not a matter of great importance for the Christian faith.” That statement was not made by Karl Barth, Martin Luther King, James A. Pike or some other modernist-liberalist freethinker of the day. It was uttered by none other than Billy Graham, ostensible champion of the cause of orthodox, evangelical Christianity. But those same modernists are telling us that there is much in the Bible that is unacceptable historically, that therefore it must be interpreted mythologically in order to distil any relevant meaning from it. Then those same modernists also have the courage to tell us that the question of the inspiration pf Scripture is of no importance. This has always been the liberalistic view of the Bible. Now in such a statement as the above, neither Billy Graham nor his liberalistic friends want to be understood as denying the inspiration of Scripture. That is not what they do. They deny the verbalinspiration of Scripture. The modernist speaks of the Scripture being inspired the way a poem or a bright idea strikes us with a moment of inspiration. The inspired Word of God, then, is not to be found only in the Bible. It may also be found in Shakespeare, Goethe; Tennyson, Longfellow, Whittier, Milton, Darwin, Emerson and Thoreau. How dare say we that the Spirit dwells in us, then to teach that the canon of Scripture has been closed since the Apostle John? Are we not interested in what the Spirit has to say in the twentieth century? Then why should not the above classics be included in the canon of Scripture? The Protestant and Reformed doctrine holds that the canon of Scripture closed with the writings of the Apostle John. The liberals hold that the canon of Scripture is continuous with the physical and spiritual evolution of mankind. The source of inspiration, then, is not exclusively the Bible, but is to be drawn from the world in which we live. The Bible of the Christian has had its day, says the modern rationalist; now a richer. Bible has come into existence, the Bible of humanity. This is a Bible in which we all may be an inspired writer. But the Bible of the Christian claims our undivided attention. “To the law and to the testimony (of holy Scripture—RCH), if they speak not according to this Word, it is because there is no light in them!” Is. 8:20.

Now the doctrine of verbal inspiration of Scripture is no misty theory, but is taught in the Bible, and is the only inspiration the Bible knows. But with modern men like Billy Graham, verbal inspiration is regarded as an untenable hypothesis that is repulsive to the majority of people. So called mass, co-operative evangelism is concerned with avoiding repulsion in order to provide an open field for inoffensive dialogue and discourse. Nevertheless, we care nothing for an inspiration that is not verbal, for that is the only biblical inspiration there is. This principal of verbal inspiration is the blue thread of truth interwoven and intertwined with the scarlet thread of vicarious atonement and the golden thread of unconditional election, all running through the warp and woof of Holy Writ. The meaning of this principle is that Scripture is the infallible revelation of God. For verbal, plenary inspiration renders the holy Scriptures infallible. It is evident that this is the doctrine of inspiration taught in the Reformed Confessions. For the Belgic Confession states that the Word of God was uttered not by the will of man, but that holy men of God spoke as they were carried along by the Holy Spirit. Then God by a special providence commanded His servants, the prophets and apostles, to commit His revealed Word to writing. Therefore we are bound to call such writings holy and divine Scriptures. (Art. 3). These writings are so truly the Word of God that against them nothing can be alleged. This is the fact, not so much because the church receives and approves them as such, but because the Spirit witnesses in our hearts that they are from God, which is exactly their own testimony. The doctrine of this Word of God is in all respects most perfect and complete, Nor do we consider any writing of men, however holy or capable, to be on a par with these divine Scriptures. Nor do we regard tradition, custom, antiquity (cf. the “Bible” of Humanity), or any school or succession of persons, ecumenical councils, encyclicals, decrees or statutes of equal value and inspiration with the Scripture of truth. For the truth is above all, while men of themselves are but liars and their productions more vain than vanity itself. Therefore, we reject with all our hearts whatsoever doth not agree with this infallible rule! (See Arts. 5, 7).

To this the Westminster Confession agrees, recognizing Scripture to be of divine inspiration and of divine authority, which it received not upon the testimony of any man or church, but upon the testimony of God who cannot lie but is truth Himself. This Word of God is the infallible truth, the whole counsel of God, immediately inspired of God, which by His special providence was kept pure in all ages. (Chap. 1).

Today’s modern theologians and evangelists try to obscure this plain doctrine of Scripture by shifting the emphasis from an infallible Word of God to an infallible Christ. They would have us believe that we would still have an infallible Christ, even if the Scripture could be proved untrue. But how would we know there is an infallible Christ if the record we have of Him were fallible? How could the Bible come to us with the truth that God is God, that He shall save His people from their sins, and infallibly lead them to glory, and then leave us with an errant account of it all—an unreliable record such as the religious socialists of the hour believe the Scriptures to be? Liberal theologians, seeing the folly of an infallible Christ in a fallible Scripture, have gone on to claim that the ultimate authority is neither Scripture, nor Christ, but the knowledge of God. They want not creeds, nor dogmas, nor the Bible, nor the Master and His teachings; they want God. It always happens: rejection of a verbally inspired, inerrant Scripture leads to the rejection of Christ. The rejection of Christ is the rejection of God. Read John 5:23, 14:6. Besides, when men say they want not dogma, but God, what do they mean by God? They themselves hardly know. Small wonder now that they go along with the “God-is-dead” fad! The god described in their vague platitudes is not the God revealed in Scripture. Nor can we perceive how the only true Almighty God can be seen to be the highest good if we do not have an infallible divine Scripture so revealing Him.

Not to appear to deny inspiration of Scripture in every sense of the word, modern churchmen employ the sleight that inspiration has to do with the thought of Scripture, not with its words. The writers of the various books of the Bible set down the thoughts God gave them, but were under no special guidance from God as to the exact formulation of their thoughts. The religious freethinker does not wish to appear disloyal to the Scriptures, hence he professes loyalty to them, but explains that by this he does not mean loyalty to atheory about the Scriptures. (Recall Billy Graham’s statement that verbal inspiration is “only a theory.”) What these churchly liberals object to is any definite teaching of the divine character of Scripture. In reality, they do not hold any doctrine which regards the Bible as inspired. But to hypocritically pose their ostensible loyalty to Holy Writ, they state that inspiration has to do not with the very words of Scripture, but only with the thoughts, that is, in their opinion, with some of the thoughts found in Scripture. But unless the inspired penmen were so led of the Holy Spirit as to make such a choice of words as to write inerrantly, then what we have in the Bible is not an infallible revelation of God, but a mere human production necessarily imperfect in character. The thought in Scripture cannot be firm, while the words which convey the thought are wavering. If the script is vague the sense will be vague. This view of Scripture sees it as semi-truth. That will afford us no more than a semi-faith. That in turn will leave us at every page of the Book benighted with doubts. Then it can never be what it claims to be, “a lamp unto my feet and a light unto my path!”

If the very words of Scripture are not inspired as well as the ideas, then we cannot be certain that in the divine canon we have the mind of the Spirit. Divine ideas could find their way into Scripture only accidentally and very corrupted, if men’s words expressing them were left to the guidance of their own minds. Furthermore, ideas cannot be conveyed as truth to the mind, except in words. No one can think a distinct and reasonable thought except in the form of a word. Inspiration of Scripture then means that, the record God has given of His revelation is inerrant and infallible as to both the thoughts and the words. The Scripture itself teaches this. ‘”Search the Scriptures, for in them ye think (and rightly—RCH) ye have eternal life.” Rebuking the liberals of His day, Christ said, ‘”Yedo err, not knowing the Scriptures,” which implies that the Scriptures are an inerring rule. Referring to the infallible authority of the Old Testament Christ said, “The Scriptures cannot be broken.” The apostles believed the Scriptures to be an infallible standard of truth. John did: ‘For these things were done that the Scripture should be fulfilled, ‘A bone of Him shall not be broken.’ And again, another Scripture saith, ‘They shall look on Him whom ‘they have pierced.'” “The holy Scriptures” alone are “able to make . . . wise unto salvation . . . All Scripture is given by inspiration of God.” What is comprehended under the classification “all Scripture”? Certainly all the books of the Old Testament, which Timothy knew from his childhood, for at that time no others had been written. But the Gospels are also Scripture, as Paul teaches in I Timothy 5:18, “For the Scripture saith . . . ‘The laborer is worthy of his reward.'” Where does Scripture say that? In the Gospel According to Luke, chapter 10, verse 7. “The Scripture saith, ‘Thou shalt not muzzle the ox that treadeth out the corn.'” Where does Scripture say that? Not only in Deuteronomy 25:4 but also in I Corinthians 9:7, 11. Peter also calls Paul’s epistles Scripture (II Peter 3:16), regards the major and minor prophets as Scripture, as well as the writings of the other apostles as Scripture (cf. II Peter 3:2 with 3:15, 16).

The battle for truth lies along the line of the true, real and verbal inspiration of Scripture. If this doctrine may now be proved to be no more than a theory, a dream, then the church’s ship of state has lost its rudder, compass and mainmast; a fundamental loss, a tragical loss of the worst kind! 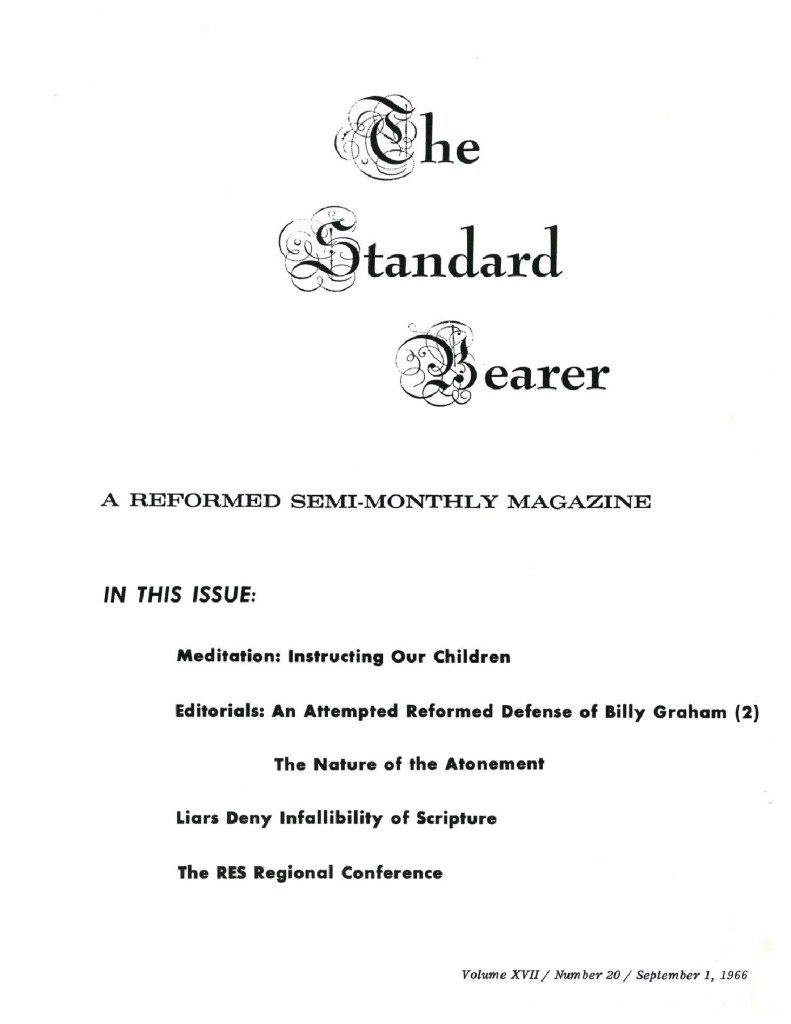