The SB on Tape

I received this very nice letter and thought you might be able to use it or part of it in a future issue under “Letters.” We are still looking for additional subscribers who have reading problems, and even those who do not find the time to sit down and read each issue and would prefer to use their personal cassette player at home or in their Car.

Thanks again for your support.

Thank you for sending me each month the cassette copy of The Standard Bearer. Each copy has something which I especially enjoy and find enriching to my thoughts. There is plenty of material available for a person who cannot see, but so much of it is undesirable from some point of view. When I get The Standard Bearer I know it is going to be theologically accurate and clear and decent to read. I pick it up with a sense of relief.

I have no ability left to read, so depend on what I can remember or absorb from hearing.

We remind our readers that every issue of The Standard Bearer is available on cassette tape, especially for those who are blind. To obtain this service regularly, write Mr. Ken Rietema, c/o Southeast Protestant Reformed Church, 1535 Cambridge Ave. S.E., Grand Rapids, MI 49506. The July 20, 1990 issue of Christian Observer featured Mr. Rietema, his daughter-in-law, Cathy, and their “Standard Bearer Tape Ministry.” The cover of this issue of the magazine has a picture of Southeast’s church building. Anyone desiring to get this particular issue, or to become a regular subscriber, should writeChristian Observer, 9400 Fairview Ave., Manassas, VA 22110.

This is to inform you that I have reprinted an article from The Standard Bearer (Vol. 66, # 16, “The Gospel of Christ,” by Rev. James Slopsema). It will be used as a “flier” and will have various contact names and addresses of our PRC members, according to the area in which it is distributed.

The only alterations I’ve made are to some spellings which I’ve brought into line with NZ conventions.

Thank you for an unfailingly excellent magazine.

In the May 1, 1990 issue of The Standard Bearer, the practice of the “Moonshine Ministry Center” of publicly displaying a cross with a man upon it (wonder why it wasn’t a woman) was condemned as blasphemous. Although this was not a religious worship service, I agree with The SB’s assessment.

Consistency is a jewel. In the August 1, 1990 issue ofThe SB, the Synod of the Protestant Reformed Churches defends the use of a cross in the worship services. With this I disagree. Is it any less blasphemous?

The use of the cross in Reformed churches has led to all kinds of aberrations. I know of one church that displays a cross with a wreath of thorns on the upright, and a red cloth draped across the arms. Another displays a cross on the floor with a red cloth draped from the top of the pulpit down to the arms of the cross. The cross also had a wreath of thorns on the upright. Another church has three crosses behind the pulpit and a red banner draped from above the pulpit to the ceiling of the sanctuary. Two churches I know of have crosses and banners displayed around the perimeter of the sanctuary. Enough of this, but can the Synod of the PRC guarantee that this will not happen in their churches?

The Synod makes much of the fact that displaying a cross is only symbolic and not imagery. But is there that much difference between a symbol, a sign, or an image? Although there are distinctions, there is also a relationship between these words. And I would ask the Synod, what is the purpose of displaying a cross in the worship service? The Lord has left us with only three symbols, signs, or images. These are the water in baptism and the bread and wine in Communion. This is enough, as He has left no instructions as to displaying crosses in the worship services. The Lord will not have His people taught by “dumb images” and, I may add, “dumb symbols,” but by the pure preaching of His word. Can the PR Synod guarantee that not one child, young person, or adult will have his attention drawn to the cross displayed and neglect hearing the preaching of the Word?

The PR Synod states that “this is not out of step with Reformed tradition and the writings of the Reformed fathers.” They have not mentioned names but I give you John Calvin, Institutes 1.11.7, who condemns the use of crosses in the worship service.

I gather that most of the day was spent on the cross-appeal. I was not there, but could it be that a spirit of unanimity was not existent in this matter and that it is far from settled?

The decision of the Protestant Reformed Synod 1990 concerned the lawfulness of a plain cross, not of a crucifix or of the dramatic reenactment of the once-for-all sacrifice of Christ. The issue before the synod was whether a symbol of a cross in or on a church building in itself constitutes violation of the Second Commandment, not whether such a symbol can possibly be abused. Synod did not approve “use of a cross in the worship services.” There is no use of crosses in the worship of Protestant Reformed churches. Crosses merely appear on or in some church buildings. If Mr. VanManen will read the complete decision in the “Acts of Synod 1990,” other questions he raises about the issue will be answered, particularly the question of the distinction between an image and a symbol. He and other interested persons who are not members of the PRC can obtain a copy of the “Acts” from the synodical stated clerk, Rev. M. Joostens, 2016 Tekonsha Rd. S.E., Grand Rapids, MI 49506 for $5.

As to the danger of abuse, the PRC will ward it off, with the host of other threats to pure worship, only as the Holy Spirit preserves in their midst the worship of God “in spirit and in truth.” Symbols of crosses have appeared in PR church buildings for many years (on baptismal fonts; Lord’s Supper tables; communion sets; etc.) without resulting in any of the oddities mentioned by Mr. VanManen. If he will visit any PR church service at any time anywhere, he will find only the simple, sober, spiritual service that has always characterized Reformed worship and that is demanded by the Heidelberg Catechism in Questions 96 and 103.

The passage in Calvin, the strongest passage in the lnstitutes on crosses, does not condemn the symbol of a cross in or on a church building as transgression of the Second Commandment. Calvin condemns the use of crosses by the Roman Catholic Church to do that which can only be done by the preaching of the Word, namely, teaching the people the gospel of Christ’s atoning death. ‘What purpose did it serve for so many crosses…to be erected here and there in churches, if this fact had been duly and faithfully taught: that Christ died on the cross to bear our curse…. From this one fact they could have learned more than from a thousand crosses….”

The decision of synod was unanimous. This unanimous decision followed careful study of the issues raised in the appeals and free, thorough debate. Whether there is unanimity in the denomination on the matter is of no consequence as regards its being settled. According to Article 31 of our Church Order, the venerable Church Order of Dordt, having been agreed upon by majority vote, the decision of synod is settled and binding in the PRC, unless it be proved to synod that the decision conflicts with Scripture or the church order. 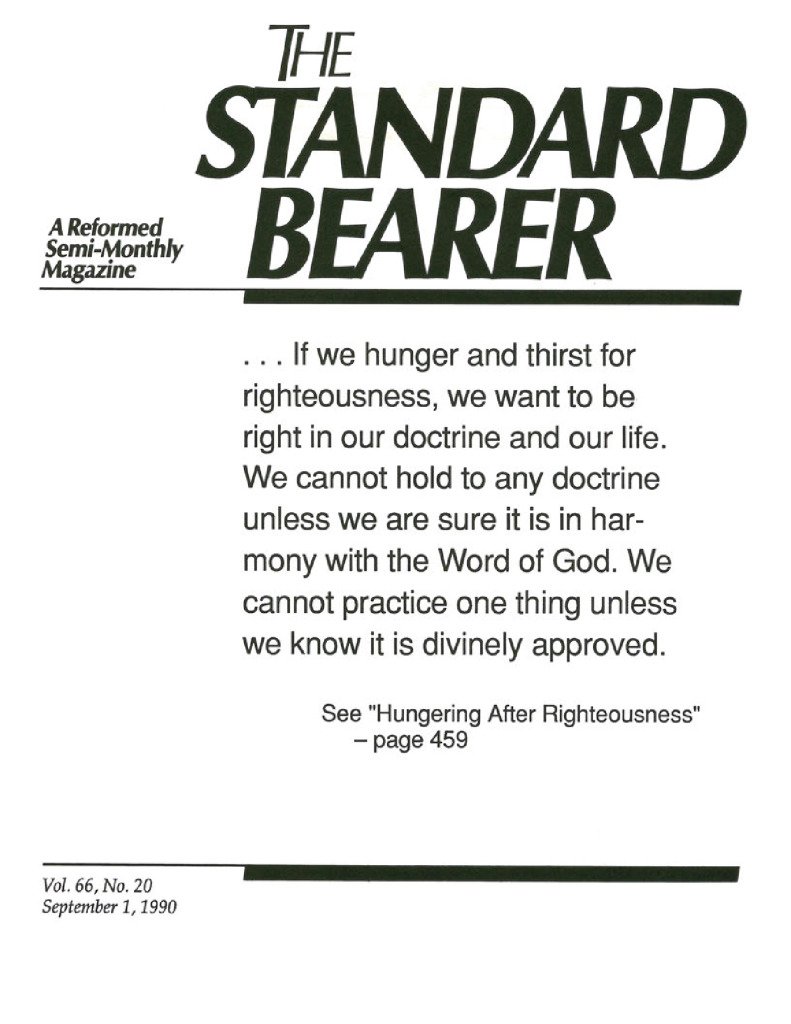