“She suffered Many Things of Many Physicians” (Standard Bearer, Sept. 1, 1994) dealt with one of my favorite Scripture passages from Mark 5:21-34. Perhaps the saddest commentary in verse 25 is the observation that she “had spent all that she had, and was nothing bettered, but rather grew worse.” How terrible of those doctors to take this poor woman’s money without truly healing her. It is certainly quite possible that some of those physicians were “faith” healers who claimed to her that they could produce a miraculous healing when they really did not possess that power.

I would, however, like to point out that Ecclesiasticus 38:1-15 begins by saying, “Honor a physician with the honor due unto him for the uses which ye may have of him: for the Lord hath created him,” and goes on to state (v. 4), “The Lord hath created medicines out of the earth; and he that is wise will not abhor them.” The books of the Apocrypha were originally included in the 1611 edition of the King James Version of the Bible, and perhaps if those books had remained in published versions, it would not have been so easy for some faith-healers to discount the(possibility that healingcould come from physicians as well as by and through faith. The Apocrypha was recognized by certain Protestant groups as educational and uplifting. These books were not only included in the 1611 edition of the Authorized King James Version, but also in Martin Luther’s German Version and in most other translations in use at the time of the Reformation.

Martyrs Mirror (p. 284), in dealing with the Confessions of the Waldenses, makes this observation about the Apocrypha: “Then follow the books of the Apocrypha, which were not received by the Hebrews; hence, we read them, as Jerome says, in the preface to the proverbs, for the edification of the people, but not for the purpose of confirming church doctrines.”

Perhaps the most important element of the passage occurs in verse 34, when Jesus addresses the woman as daughter. Jairus had come to Jesus because Jairus, a finite, mortal man was genuinely concerned about his one and only daughter. But Jesus, the Master, was deeply and genuinely concerned about allthe daughters of God. II Corinthians 6:17, 18, quoting Isaiah 52:11 and Jeremiah 31:9, says of God, “And will be a Father unto you, and ye shall be my sons and daughters, saith the Lord Almighty.”

Perhaps the most overlooked element of healing is the need of the afflicted to be able to visualize themselves as the favorite son or daughter of the Savior—for in Jesus’ eyes, we all are favorites! Truly, Paul observed (Gal. 4:6), “And because ye are sons, God hath sent forth the Spirit of his Son into your hearts, crying, Abba, Father. Wherefore thou art no more a servant, but a son; and if a son, then an heir of God through Christ.” In the depths of Gethsemane, Christ Himself cried, “Abba, Father, all things are possible unto thee: take away this cup from me: nevertheless not what I will, but what thou wilt” (Mark 14:36).

Whether it is a daughter’s flow of blood or a beloved son’s impending crucifixion, Abba, Father, is deeply and genuinely concerned and is taking a personal interest in all events.

Our Reformed churches have this view of the Apocrypha:

We distinguish those sacred books (which have just been named—Ed.) from the apocryphal (which are then named—Ed.) … All of which (apocryphal books—Ed.) the Church may read and take instruction from, so far as they agree with the canonical books; but they are far from having such power and efficacy, as that we may from their testimony confirm any point of faith, or of the Christian religion; much less detract from the authority of the other sacred books (Belgic Confession of Faith, Art. 6). 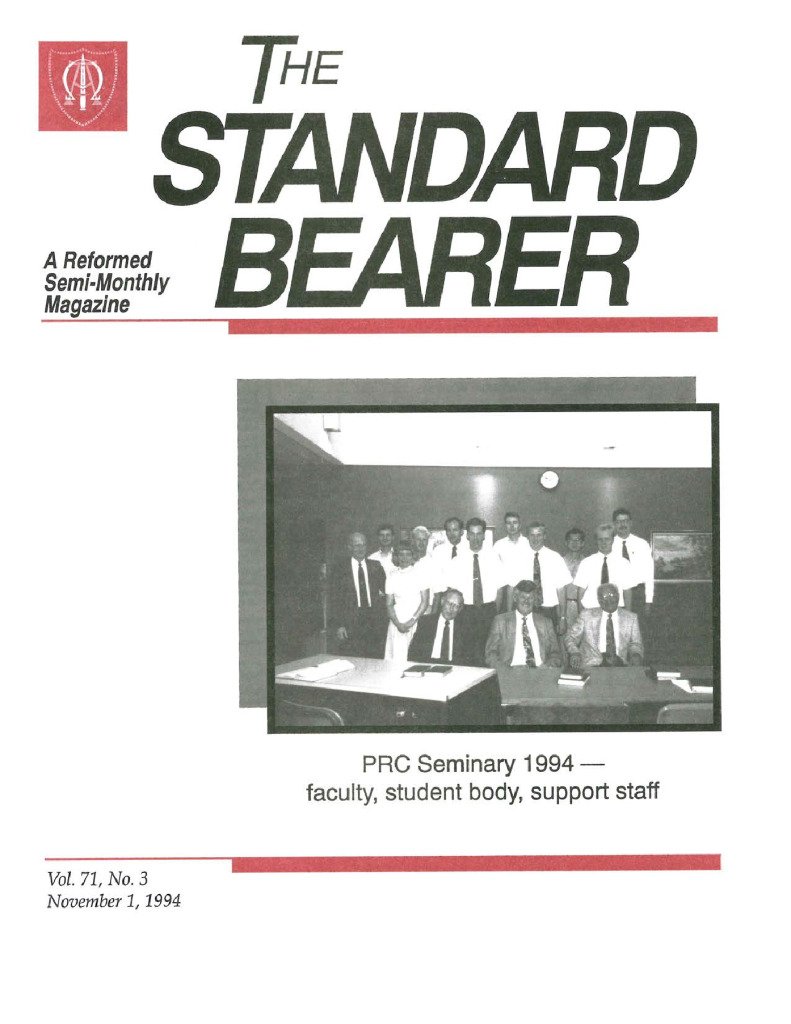