There are many things which a Christ-centered sermon isnot.

A Christ-centered sermon is not necessarily a sermon which mentions the name of Christ many times. I do not think it is difficult to imagine how this is possible. A very Modernistic preacher may mention Christ’s name fifty times in his sermon, but do so in such a way that he presents Christ as an example Whose life we ought to imitate. No matter how many times the nameof Christ is mentioned, his sermon is not a Christ-centered one, for the Christ of the Scriptures is not merely an example, but Savior.

I could mention, I suppose, that certainly the Scriptures admonish us to follow Christ as our Example. I am reminded, as an illustration of this, of what Peter writes to God’s people: “For what glory is it, if, when ye be buffeted for your faults, ye shall take it patiently? but if, when ye do well, and suffer for it, ye take it patiently, this is acceptable with God. For even hereunto were ye called: because Christ also suffered for us, leaving us an example, that ye should follow His steps” (I Peter 2:20, 21). But this is not Christ the example of the Modernist, in whose eyes Christ is nothing but an example; even here Christ is our Savior, and He is our Example only because He is our Savior: “Who did no sin, neither was guile found in His mouth. . . . Who His own self bare our sins in His own body on the tree, that we, being dead to sins, should live unto righteousness: by Whose stripes ye were healed” (I Peter 2:22, 24).

An Arminian preacher can also mention the name of Christ many times in a sermon, but still not preach a Christ-centered sermon. In fact, it is characteristic of Arminian Fundamentalism that the name of Christ is mentioned repeatedly. And, indeed, this deceives many. But a Christ-centered sermon it is not. It cannot be a Christ-centered sermon because it makes man’s will the ultimate determining factor in the work of salvation. And if the will of man is the ultimate determining factor, then Christ is not a complete Savior. He may be a partial Savior; He may be a Savior Who has made salvation available; He may be a Savior Who gives His salvation only to those who take the initiative by coming to Him to obtain it; but He is not a complete Savior.

Our Heidelberg Catechism has a very strong question and answer about this. I refer to Q & A 30: “Do such then believe in Jesus the only Savior, who seek their salvation and welfare of saints, of themselves, or anywhere else? They do not; for though they boast of Him in words, yet in deeds they deny Jesus the only deliverer and Savior; for one of these two things must be true, that either Jesus is not a complete Savior; or that they, who by a true faith receive this Savior, must find all things in Him necessary to their salvation.” There you have it—in very strong language. If one denies that Jesus is a complete Savior, one may boast of Him in words, but one nevertheless denies Him—does not believe in Him. That is strong language, but very true.

I recall an incident from my grade school days which illustrates this, I think. It was back in 7th or 8th grade in a Christian school in the Chicago area. We had a missionary speak for the school. I do not remember any details about the speaker or the speech. But I do remember that, when I arrived home, my father asked me what I thought of the speech. I told him that I did not care very much for it. He, of course, asked the reason for this. I was hard-put to give an answer, but finally blurted out: “She kept mentioning the name of Christ all the time.” No more than I had said it, and I was somewhat ashamed. And my father was taken aback by this and responded: “Isn’t it good to mention Christ’s name in a speech?” I had to confess that indeed it was. But more than that I could not say. Looking back over the years, I became persuaded that the difficulty was that the repeated mention of the name of Christ was a kind of a blasphemy because Christ was presented in a very Arminian way.

There is another kind of sermon which is not Christ-centered. There are times when a sermon is preached and Christ is made the “third point,” so to speak. If the minister, in good Reformed tradition, has a sermon of three points, then in the third point he speaks of the cross of Christ, of the need of divine grace, and of the fact that Christ, through His cross, is our Savior. This is not a Christ-centered sermon either. It may be a Christ-ended sermon; but it cannot be more than that. It is very well possible, and, in fact, often done, that such a third point really contradicts the whole tenor of a sermon and is little more than an attempt at the end to patch up what is essentially Christless. A man-centered sermon which ends with strong emphasis on Christ and His sovereign grace—no matter how loudly shouted or emphatically preached—has not become Christ-centered.

It is reminiscent of the remark of a rather astute man who years ago characterized the preaching which he heard with the words: “De genade komt achteraan als ‘n hinkende paard“; i.e., “Grace trots on behind like a limping horse.”

No amount of references here and there in a sermon to Christ and to the need of grace can make a sermon Christ-centered which is not Christ-centered in its whole theme, approach, emphasis, and direction.

What then is a Christ-centered sermon?

There are a number of things I want to say to you about this; and I am sure that I will not be able to say them all in this letter. But in the space I have left in this one, there are especially two points which I want to make.

A Christ-centered sermon is, quite obviously, a sermon which speaks always and only of Christ. But what precisely does that mean? Well, it means in the first place, that the sermon tells of Who Christ is and what He has done. It is a sermon which speaks of Christ as the eternal Son of God Who came into our flesh and became like us in all things, except our sin. It tells of Christ’s whole work beginning with His birth in Bethlehem, going on through His earthly ministry and suffering, concentrating upon His death on the cross, and climaxing in His resurrection from the dead, His ascension and exaltation into heaven and His return upon the clouds of heaven to judge the living and the dead and to make all things new.

Now, quite obviously, it is impossible that every sermon speak of all this. It is also impossible that even one part of this be fully and detailedly treated in any given sermon. But the point is that the sermon mustproceed from this truth. A sermon must have this truth as its central theme—no matter what may be the specific subject under discussion. A sermon must have this current running through it like the electric current carried by a wire. A sermon must develop this fundamental truth no matter what aspect of Scripture is being treated. I want to give you some specific illustrations of this in a future letter; but let this be sufficient for the present: all the truth concerning Who Christ is and all the truth concerning His glorious work centers in the cross. For it is on the cross that our Savior accomplished full and complete salvation as the eternal Son of God Who came into our flesh. And every sermon has to have its starting point there.

In the second place, every sermon which is Christ-centered is also God-centered.

It is possible to be Christ-centered in a wrong way. In fact, this is precisely what is wrong with so many hymns and what is so very, very right about ourPsalters. What is true in songs can also be true in sermons.

This should be obvious from a few considerations. Surely all Scripture, so completely Christ-centered, is nevertheless the revelation of God to Whom belongs all praise and honor and glory, for of Him and through Him and to Him are all things (See Romans 11:36).

And a truly Christ-centered sermon is a sermon which sets forth Christ as truly God Himself. God was in Christ reconciling the world to Himself. God, in the person of His own Son, came into our flesh, for Christ is Immanuel, God with us. God lived among us; and in our human nature, which the Second Person of the holy trinity united with His own divine nature, God died on the cross to accomplish the redemption we could never accomplish. God is our Redeemer and Savior, our Help here in life, and our Hope for all time. 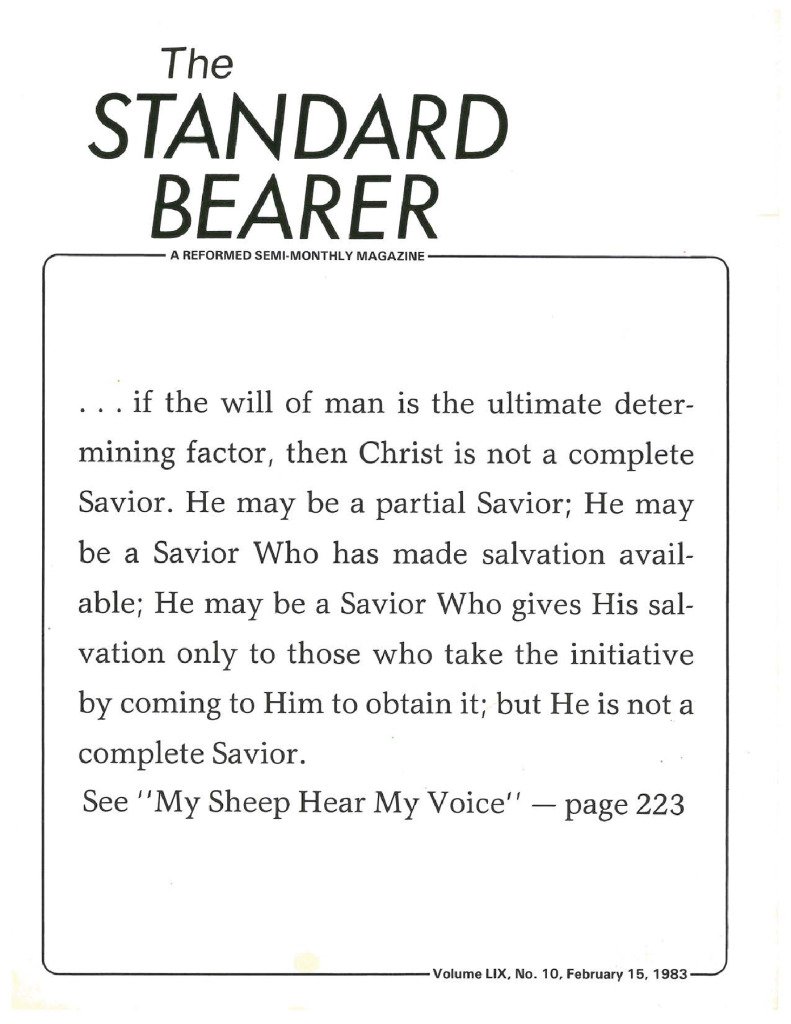