In my last letter to you I finished our discussion of some of the qualifications which a pastor ought to possess in order to work effectively with the sheep over which the Lord has placed him. I do not want to pursue this matter further at this time, but I do want to say a few words about the role of the elders in the whole area of pastoral work.

It is my judgment that, generally speaking, we do not involve the elders sufficiently in this aspect of labor. It is true that the elders are called to perform the work of the government of the Church, and that this means that elders are to be engaged especially in discipline. But this distinction must not be so forced that the elders are barred from doing the work which involves helping those who are in distress and beset by problems of every sort.

That this is also the work of elders follows from several considerations.

In the first place, there cannot be any question about it that this work does indeed involve the government of the Church. It is not necessarily a part of discipline, if by discipline is meant the exercise of the keys of the kingdom. But discipline is a much broader term and includes more than censure and excommunication. Its basic meaning is, after all, instruction. So we also speak of “The discipline of the Word” as that Word is preached to all God’s people on the Lord’s Day. The Word which also the elders are called to bring is a Word of instruction to God’s people in particular circumstances in which the Lord has placed them. And that Word, in its very nature, has always a certain correcting power when it is applied to the heart by the sovereign operation of the Holy Spirit. The elders also bring that Word.

In the second place, the elders are the only ones in the congregation at certain times who are in a position to do this kind of work. This is true when a congregation is without a shepherd or when, for one reason or another, the pastor is absent from his flock. The responsibility for all kinds of pastoral labor falls exclusively on them.

In the third place, they are often best equipped to do this kind of work. It is, after all, a fact that a minister comes into a congregation as a total stranger. It takes him at least several months to come to know anything about that congregation at all and a much longer period of time to know the congregation intimately. In that congregation he stays for five or six years (sometimes less, sometimes more) and then he leaves for another flock. But the elders are often men who have been born and raised in a congregation, or who are, at least, members of a congregation for a much longer time than the minister. They know the congregation better. They have closer contact with the congregation. They are better able to understand the strengths and weaknesses of a given congregation (for, if I may put it that. way, a congregation taken as a whole also has a personality, a particular character. In fact, it has struck me over the years that a congregation does not even change its personality very much even though one generation may die and another generation take its place.) They have known the members more intimately in their lives and problems. We talked a bit last time about how essential it is for one to know the sheep with whom he works. But elders know these people far better than does the pastor.

For these reasons elders are often in an excellent position to do pastoral work. And they ought not to be barred from this.

It is often objected that a pastor is in the best position to do this kind of work because he is trained for it in the Seminary. There is, of course, an element of truth in this. But there are several considerations that do not make this objection very serious.

In the first place, a student in the Seminary does not really get all that much formal training in this area. If fact, in our Seminary he gets only one semester of two hours of such formal training. This does not mean that matters of pastoral concern do not come up in many other courses and in many other connections. But the fact remains that his training is quite skimpy. We might make a good case for an expansion of this part of our Seminary curriculum; but the fact remains: this is the way it presently is.

In the second place, any minister will tell you that, while the training he received in the Seminary is necessary and invaluable, it was after all, when he actually began his pastoral work that he really began to learn what this work was all about. In the natural sciences you can add laboratories to your school so that students have actual experience in cutting up frogs and such like things. But you cannot make a pastoral laboratory in the Seminary because you cannot move life itself in all its complexity and diversity into a lab. You cannot, make a scientific study, within the walls of the school, of the troubles and problems which beset the people of God. You cannot pull out a man’s soul and place it under some theological microscope in the Polemics class. And not only does a pastor really learn what pastoral work is all about when he actually does the work, but he continues to learn all his life long. There are never two problems which are exactly the same because there are never two people who are exactly the same. Experience is everything. And an elder can gain that experience just as well as a pastor.

In the third place, it may very well be that elders need some help and guidance, some instruction and assistance in this work. But there are really no significant reasons why such help cannot be given. I know that ministers and elders are all busy and there is little time for extra meetings and extra work. Nevertheless, in an important matter such as this, it would be worth considering that a minister spend some time giving his elders some instruction in these matters, or, if it would work out better, that the minister and his elders meet periodically to discuss principles and methods of pastoral work. At the very least, ministers and their elders should spend some time at every consistory meeting going over the current problems in the congregation and discussing them. I am increasingly convinced that ministers ought not, as a general rule, labor in this area entirely independent of and without the knowledge of the elders. And I am increasingly convinced that the elders should take more of this work upon themselves.

Let the elders assume more of this work within our churches. God will bless our elders so that they can perform this work; and God will bless our Churches through this work. It is indeed my own experience that elders are well able to do it if only they are encouraged and instructed as much as possible.

We must turn now to other subjects, but we shall wait with that until another letter. 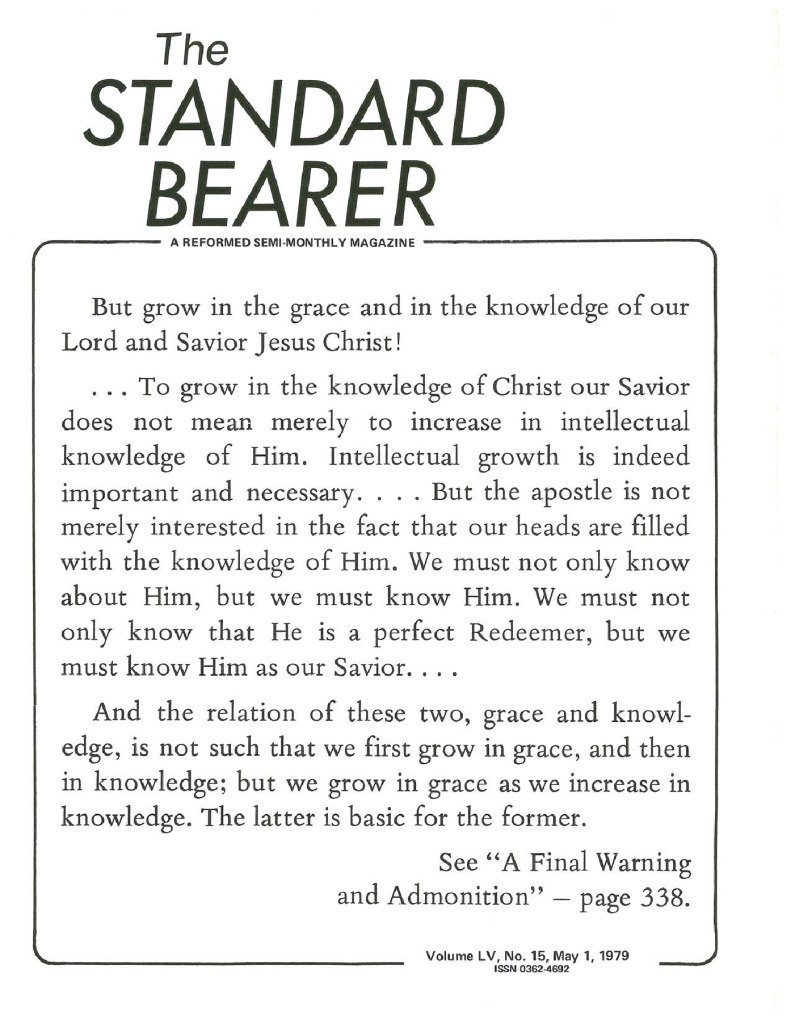