We discussed last time some of the principles which were involved in this relationship; and we left for this letter some practical illustrations of how this works out in the Church.

The point which needs to be made here is that the office of minister arises out of the Church itself. This is true in more than one sense of the word. We have noticed in earlier letters that this was true of the origin of this office, for it arose organically out of the life of the New Testament Church as it was established by the apostles. The Church was there first. Without the existence of such a Church there could be no office of the ministry of the Word. It is dependent upon the Church for its very existence. All this does not mean, however, that the Church can exist as institute without the office of minister. A given congregation may be vacant for a while; but this is an abnormal situation which the Church attempts to correct as quickly as possible. Nevertheless, the minister is himself a part of the Church, lives in the Church, receives his office as a member of the Church.

Our Form for the Ordination of Ministers emphasizes this very strongly. The question is put to a minister at the time of Ordination: “I ask thee, whether thou feelest in thy heart that thou art lawfully called of God’s Church, and therefore of God himself, to this holy ministry?” The calling of God to the office of minister is therefore through the Church itself. Only through that Church does a minister come to his office, and only in that Church does he hold that office.

Nor must it escape our attention that the Church here is the whole Church including the office of believers. It is for this reason that the male members of the congregation come together at a congregational meeting to call a minister. They have a voice in the matter of the call. In a way they have a decisive voice. The man who is elected by majority vote within the congregational meeting is the man to whom the call is extended.

The implications of this are clear. The congregation receives from Christ the command to preach the Word. The congregation is responsible for the fact that that Word is preached from Sabbath to Sabbath. The congregation must be in obedience to this command of Christ so that that Word goes forth to the gathering and preservation of the Church. And, at the same time, the congregation is responsible for the fact that that Word is preached in purity of doctrine and according to the Scriptures. It is certainly true that a minister preaches with the authority of his own office. It is also true that he is the one who spends the week in prayerful meditation upon the Scriptures and in prayerful preparation of the sermon. It is further true that when he preaches, he preaches out of his own conviction—what he believes to be the truth of the Word of God. But he is not in any sense isolated from the congregation; he is a living member of it. He works in the exegesis of Scripture and in the preparation of a sermon as a member and part of the congregation over which the Lord has placed him. His convictions, therefore, are the convictions of the Church of which he is a part.

To use an extreme example: It may be that a group of believers finds itself alone in a given place for whatever reason that may be. As this group comes together to discuss its obligations before God, the individual members will certainly begin to realize that they have a responsibility to preach the gospel. But they cannot do this in such a way that every man simply begins preaching willy-nilly and on his own. This is confusion and disorder. Nor can there be any real preaching (which is official) in such a situation. So they must come together for purposes of calling a minister so that they can fulfill this calling. Even if they have to call a minister from their own group, they must do this, for they cannot be a Church unless they do.

It is well to stress this point, Timothy. It is well for congregations to be reminded of the fact that the responsibility for the preaching finally rests upon them. It is well that they remember this so that they may gladly assume that responsibility, so that they may pray for their pastor, encourage him in his work, give him the support that he needs when he functions as the minister through whom they do the preaching. It is well too that ministers remember this. For the consciousness of this will serve as a remarkably powerful deterrent to any ambitions they may have to set themselves up above the congregation as someone superior to the flock over which they have the rule. And, in passing, we may note that it is for this reason that we think the Presbyterian idea wrong that the membership and office of the minister resides in the presbytery (classis) and not in the local congregation.

If therefore, theoretically now, a minister becomes unfaithful in his preaching, and if the elders will not do anything about it but rather side with the minister, then it remains for the congregation to exercise effectively the office of believers and reconstitute the Church of Christ in that place by seeing to it that a minister is once again lawfully called to minister the Word. In this way the office of believers preaches once again the pure doctrine of Scripture through the special office of the minister.

This is so true that, to give an extreme example, if officebearers are unfaithful in a given place, the congregation would have the right to exercise discipline itself, depose the officebearers and reconstitute the Church of Christ.

But it must not be forgotten that, at the same time, the officebearers exercise the rule over the Church. A minister is called from a trio or duo proposed by theConsistory. Elders and deacons are chosen from a nomination submitted to the congregation by theConsistory. And, in order to preserve this balance, we have articles in our Church Order which, e.g., make it mandatory that no matters may come to the congregation except they first be submitted to the Consistory. And there are other instances of this control and direction which the officebearers themselves exercise. And all this is because, in a very important sense, the officebearers have authority in the congregation which authority they have received from Christ.

I am not surprised that worldly people have difficulty understanding these things. Yet, if you stop to think about them, they constitute the genius of Reformed Church Polity. It always amazes me that, on the whole, the Reformed Churches have succeeded so well in maintaining this balance. But it is also important that this balance be maintained, and we must ever be on our guard against anything which would destroy it. We must guard, on the one hand, lest the office of believers is forgotten and shoved aside by hierarchical officebearers who do in the Church of Christ what they please without any consideration of the people of God. And we must guard, on the other hand, against a loss of authority so that the officebearers are considered little else than the minions of the congregation. The balance is Reformed. Nothing else will do. 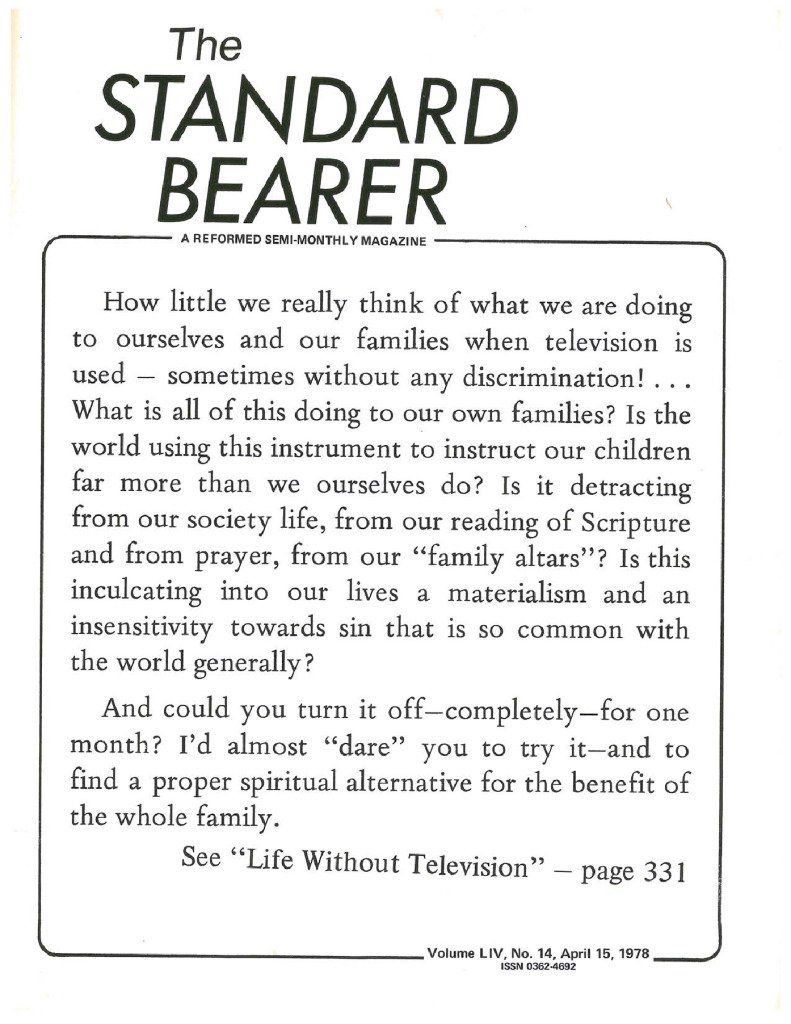