Hebrews 13:17 is a very interesting and instructive passage of Scripture in connection with the subject we are presently discussing. In my last letter we talked about various aspects of the instruction of Scripture in this passage, particularly the admonition to obey our pastors and yield to them. It is the last part of the text (“that they may do it with joy, and not with grief: for that is unprofitable to you”) that still needs to be discussed.

A minister can do his work in the Church of Christ with grief. That is entirely possible, and it happens all the time.

It is interesting to notice that the minister still does his work—even though it is with grief. This is, of course, not always the case. It happens many times that the work of the ministry becomes too much of a burden for a man to bear. He simply cannot go on and the result is that he leaves the ministry for a secular vocation. This is a great tragedy. Sometimes, of course, the fault lies with the minister himself. He went into the ministry with some wrong notions about what an easy life he would have. Or, perhaps he did not realize that the work of the ministry is filled with sorrow and disappointment, with trouble and opposition, with difficult problems and heavy responsibilities. And when he discovers that this is the case, he becomes discouraged and downhearted and finds that he is unable to continue in the work. Sometimes even he brings many of his problems and troubles upon himself by foolish conduct and by unfaithfulness in the work. But this is not always the case. There are other times when the congregation itself makes his life in the ministry almost unbearable. There are those in the congregation who are constantly opposing all that the minister does: sometimes by overt opposition, but more often by innuendo, subtle remarks which bring into question the minister’s integrity, sincerity, dedication, orthodoxy, etc. There is overt or covert undermining of a minister’s work and there is effort put forth to influence others in the congregation to resist what the minister does. This kind of activity manifests itself in gossip within the congregation about the minister and his preaching and labors. It manifests itself in efforts to get others to question the minister’s sermons. It becomes evident in the attitude which some take towards the preaching on the Lord’s Day when they sit in Church, or when they talk with the minister, for they show a certain attitude of disrespect. But if this continues long enough, the result is that a minister can be driven to despair. He can be driven right out of the ministry under the burden of opposition.

Nevertheless, all other things being equal, usually a minister continues his work even when he does it with grief. He is called by God to the work and he endures in the work even when it becomes very difficult. And this passage in Hebrews presupposes that.

When ministers do their work with grief this is because there are those in the congregation who will not submit to the Word of Christ which he brings. It is not surprising that this should be so. A minister labors out of love for the sheep over which the Lord has placed him. He finds his joy in the ready acceptance of the Word of Christ by the people of God entrusted to his care. It is a grief to him when the opposite is true.

There is no question about it that ministers also are human and burdened with the same weaknesses and sins which afflict us all. And because there is always sin, there is always the tendency on the part of a minister to take the criticism and opposition which come to him, in a personal way. He feels personally slighted; his pride is lacerated; his own person is attacked; and he becomes angry because of the personal element which he has introduced into the matter. But a serious and dedicated minister of the gospel nevertheless shrugs these personal matters off insofar as that is possible. His grief is really due to the fact that there are those in the congregation who jeopardize their own souls by refusing to obey and submit to the Word of Christ. The minister comes not with his own word; he is the spokesman of Christ. What he says, Christ is speaking through him. And the congregation is not asked to bow before him, to accept his word, to yield to what he says; the congregation stands obligated to bow before and receive with humility the Word of Christ. When there are those in the congregation who will not do this, the grief of a minister is exactly because Christ is mocked and slandered and Christ’s Word ignored. By doing this, the people put their own souls in jeopardy.

How can this be?

When a minister of the Word performs his work with grief, it inevitably affects that work.

The opposite is suggested here in the text. A minister can also perform his labors with joy. There is joy in his work when the congregation submits to the instruction of the Word of God. You can readily understand this. The congregation comes together in eagerness on the Lord’s Day to hear the Word of God proclaimed. The needs and work of the minister are constantly in the hearts and prayers of God’s people. When that Word is preached on the Lord’s Day, the congregation readily and eagerly receives that Word as from Christ Himself. When instruction is given in the truth of Scripture, the congregation listens attentively, searches the Scriptures whether these things be so, and rejoices in the knowledge of the truth as it is in Christ Jesus. When the minister brings the warnings and admonitions of the Scriptures to the congregation, the people of God humble themselves under the Word of Christ, repent of their sins, turn from their ways of evil, flee to the cross for forgiveness and pardon, and look to Christ for the spiritual strength they need to walk as God’s people in the midst of the world.

When these things happen in a congregation, the minister does his work with joy and gladness. He sees the fruit of his preaching in the congregation and rejoices in his work. And the result is that he labors more diligently, works with joy and eagerness, looks forward to the Lord’s Day, bends every effort to make his sermons and his labors yet more fruitful. There is growth in him and in his preaching, progress and development, spiritual advancement.

In an atmosphere such as this the Spirit works mightily. The Spirit of Christ Who brings the Word of Christ preached to the hearts and consciousness of the congregation brings also the great and mighty blessings of salvation. There is peace and unity, joy and blessedness, spiritual growth, a love for God and for one another, a bearing of one another’s burdens, a spirit of encouragement of one another and of helping one another in the difficult pathway of life. It is not difficult to see that all this is for the spiritual profit of the congregation.

The opposite happens when there is no determination to obey and yield on the part of the congregation. There is instead a spirit of criticism and disparagement of the preaching. Under such circumstances as this, the minister labors with the greatest difficulty. He wonders whether his sermon will be received or whether it will be once again subjected to the intense scrutiny of critical minds. He wonders whether there will be any reaction to his preaching at all, or whether the congregation will remain cold and unmoved. He wonders whether it is worthwhile to make a sermon because no one seems to listen except to find fault. The joy goes out of his work. He dreads Sabbath. He dreads climbing the pulpit to speak to the people. He cannot and does not do his best work for he is caught in a web of criticism which stifles his enthusiasm and kills his excitement in his calling. How can he, under these circumstances, do his best work?

And so also the congregation suffers. There is a kind of vicious circle. The preaching becomes less and less enthusiastic, and the reactions of the congregation grow more and more critical or the congregation increasingly doesn’t care any more about what is happening in the pulpit. And so, doctrinal preaching becomes a bore because it is proclaimed in a flat, monotonous, dry, and boring way; and the truth is lost. Admonitions are ignored as people set themselves against anyone who dares to presume to criticize their pet sins and point out to them where they need repentance and conversion.

But, worst of all, the Spirit is grieved. And when the Spirit is grieved, then the whole work of the preaching suffers. The Spirit withdraws Himself from the congregation so that His presence is there less and less. And when the Spirit withdraws Himself, instead of a spirit of joy and happiness, eagerness and love, growth and blessing there is a spirit of coldness and formality, of joylessness and disunity, of internal bickering and scrapping which robs the congregation of the communion of the saints. As this vicious cycle continues, the situation gets worse and worse until the congregation loses its identity as the Church of Christ.

The Word of God is very powerful in this passage. It summons you and me, in our respective congregations, to self-examination. The issues are very serious and the consequences devastating. The welfare of the Church of Christ and the salvation of our souls is at stake. Let us then hear this Word of God, repent of our sins, and learn to submit to those whom Christ has given to be our instructors and pastors in the Lord. 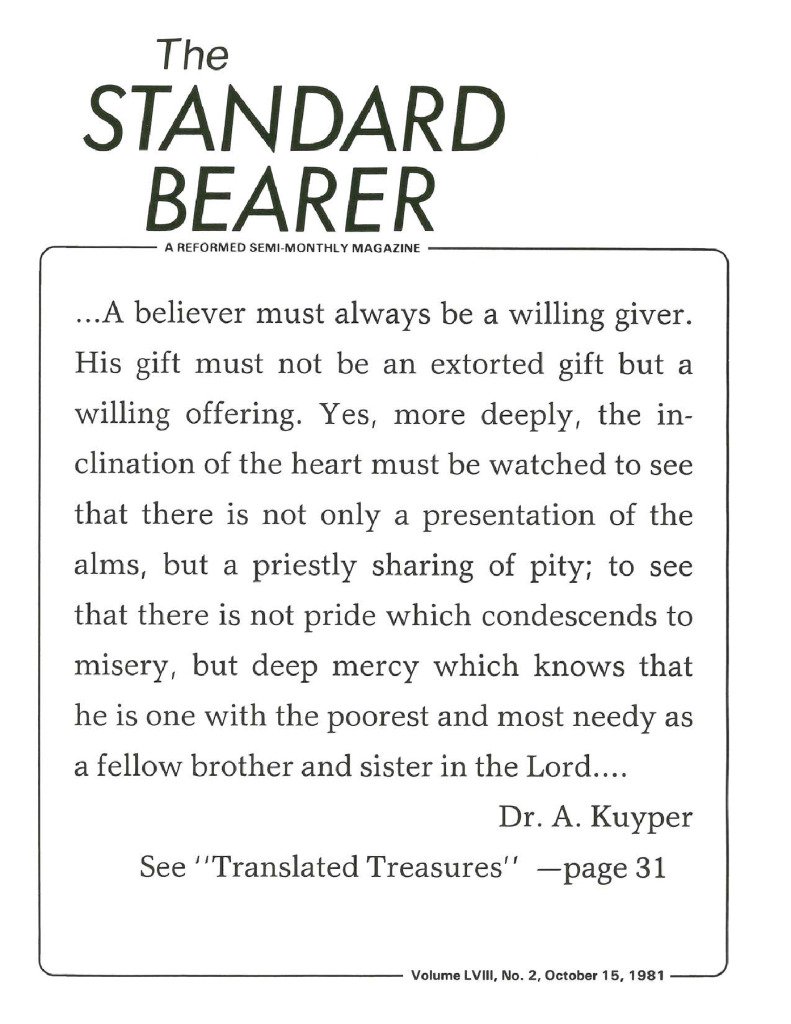