The time has come in our discussion to talk about the office and work of the elders in the Church of Jesus Christ.

In previous letters we have already talked about the basic idea of the office of elders: how it stands connected with the Old Testament offices; how it is related to the office of the apostles and the office of the ministry of the Word; what is the chief feature of this office as a special office in the Church of Christ; and such like subjects. Now we must turn to more practical matters in connection with this subject.

There are a few remarks which I wish to make first of all with respect to the calling of elders.

It is certainly true, as the Form for the Ordination of Elders and Deacons makes clear, that elders too are called by Christ through His Church. The office of believers functions in the call of elders because Christ is pleased to put men into office through the means of the choice of the believers in the congregation. Even this election of elders, though through the office of believers, is under the supervision and direction of the Consistory itself. Our Church Order provides for two methods: The Consistory may present to the congregation either a double number from which half are chosen, or may simply submit a slate of officebearers for approval. In any case, the Consistory exercises supervision, while the congregation makes the choice or gives approval. Here too is part of the genius of Reformed Church Polity of which we spoke in. an earlier letter. Here too there is neither democracy nor dictatorship: both believers and officebearers have their own assigned role. Both aspects of this are necessary and important.

But what is a striking aspect of this call is its similarity to the call of ministers. In Article 4 of our Church Order, four separate elements are included in the lawful call of the ministers of the Word: election, examination, approbation, and ordination. Our fathers considered, rightly, that these four elements had to be present if a minister of the Word was to be called in such a way that it met with the requirement of decency and orderliness in the Church of Christ.

Now, at first glance, we might think that these four elements are not present in the call of elders, and, for that matter, deacons. Nevertheless, a careful examination of Article 22 of the Church Order will reveal that this is indeed the case.

There is a slightly different order here because of the situation which we have in our Churches. In the case of ministers, election precedes the examination. This is because all our students from the Seminary are examined on the Synod, declared eligible for a call if they pass their exam, are elected by a local congregation to be pastors, and then are examined by Classis after the election in the local congregation takes place. But elders are really examined prior to the election.

But the elements are all present.

We need not .discuss this in detail, except for the matter of examination. One might think, at first glance, that no provision is made for the examination of elders. But this is not the case. Although the Church Order only speaks of “suitable” persons, the Scriptures themselves make it clear that elders must have particular qualifications. These qualifications are especially listed in I Timothy 3:1-7 although they are stated or implied in other passages of Scripture. And it is concerning this matter that I want to say a few things to you.

The first thing that needs saying is that good elders who meet the qualifications of Scripture are of utmost importance in the Church of Jesus Christ. We sometimes call our system of Church government “Presbyterian”; and this refers especially to the fact that elders occupy such an important place in the Church. In a way they are more important even than the minister. I do not mean to minimize the importance of the preaching of the Word, of course. After all, this is the chief means of grace. But the fact nevertheless remains that the welfare of a given congregation is greatly dependent upon the elders who serve in it. In any given congregation, ministers come and go. They never stay very long. And it is good that they do not. But elders are men who are members of a given congregation perhaps all their life. They stay when a minister leaves and a new pastor is called. They are the officebearers who give stability and continuity to the congregation. Upon them, above all, falls the responsibility of the Church over which the Lord has placed them. The spiritual strength of a congregation can often be weighed by the quality of its elders. Others from; different ecclesiastical circles, who have never known what the office of elder is really all about, after having learned concerning the idea of the office of elder, stand amazed at the institution of elders as it functions within Reformed and Presbyterian circles. Anyone who minimizes this office either does not understand it or has no regard for the well-being of the Church of Christ.

It is for this reason that good elders must always be chosen. The Consistory has a very serious responsibility here. It is so easy to let other motives determine the nomination when that time comes in the early fall. The Consistory might, e.g., consider putting a certain man on nomination because he is always somewhat critical of the work of the Consistory, and the feeling is that if only he would serve once in the Consistory and realize what the work really was he would cease being so critical. Or the Consistory might put a man on nomination out of some motivation of sympathy because he is overlooked in the congregation, neglected in the life of the communion of the saints, or whatever. Or he may be nominated because he is an outstanding man in the community, a man of influence among his fellow men, a man successful in business with known administrative gifts. And even though such a man may be lacking in the spiritual qualifications necessary to rule in the Church of Christ, he may be put on nomination for these reasons. There are many different reasons why a particular man may be nominated which are not proper.

The Church needs the best possible elders. And the Consistory must take special care that the best possible men are nominated for this work. There must be special care exercised to nominate men who have been endowed by God with the gifts which God Himself has decreed as necessary for the work of this office. The very welfare of the congregation is at stake.

Sometimes there are qualified men in the congregation, but these men, for one reason or another, are reluctant to serve. It is almost impossible to get them to allow their name to remain on nomination. This also is wrong. It is sometimes true that the able men in a congregation are very busy in other work. They are perhaps busy in the School Boards of the Christian Schools or in various committees of the higher ecclesiastical assemblies so that they have little time to add to their busy schedules. They have family responsibilities which require their attention. But the fact is that the calling to serve in the Church of Christ is a calling which is first. It must be considered above other responsibilities as a call of God. While it is true that no father may neglect his family, no other work within the Church is as important as the work of an officebearer. This always comes first. And Consistories ought to remember that they ought not to leave a name off the nomination because such a person is serving on the School Board if such a one is clearly the one most obviously qualified for the work.

But sometimes qualified men simply will not serve. This, for whatever the reason may be, is not good. No man has the right to say No to God. Such a man may, of course, have reasons for not serving of which the Consistory is unaware. Then, if he brings them to the attention of the Consistory, he will be taken off the nomination. But if he has no such reasons, he may not say No. He may feel himself to be unqualified, but this is in every case true of a dedicated child of God. The spiritual qualifications which enable a man to serve are given from God.

The congregation has a certain responsibility also in this respect. Every man must consider the possibility that God may call him to the work of the Church. We have really some strange notions about this. A young man who desires to enter the ministry of the Word must himself take the initiative. He may be encouraged by Godly parents and by understanding officebearers; but the initiative is finally his as he pursues his course of study, applies for entrance into the Seminary, and performs his studies in preparation for the ministry. But for some reason we frown upon this when it comes to other officebearers.

I know that it is not right for a man to set himself forward and actively campaign for a place on the nomination. This smacks too much of what the apostle John condemns as “loving to have the preeminence.” (See III John, 9.) And affairs in the Church of Christ are not political and must never become such. Nevertheless, a man of God deeply committed to the cause of God and of His Church, ought to face the question, in integrity of heart before God’s face, whether God has a place for him in the work of elder or deacon. And though he must wait patiently until God calls him to such a work, he must nevertheless prepare himself from youth on for this possibility. He must ponder, as honestly as he can, whether God has given him the gifts necessary for this calling. He must make the study of God’s Word a part of his life. He must involve himself in the affairs of the Church and the work of the people of God as much as in him lies. And He must develop those gifts which God has given him so that if the time comes that God calls him to this work, he is ready. It is not only true that there is nothing wrong with this, but this is his solemn obligation. And if each, in his own place, does this, then there will always be men who are ready and able to serve.

It is good, Timothy, that on family visitation and in your work in the congregation you remind your people of this.

Fraternally in the Lord, 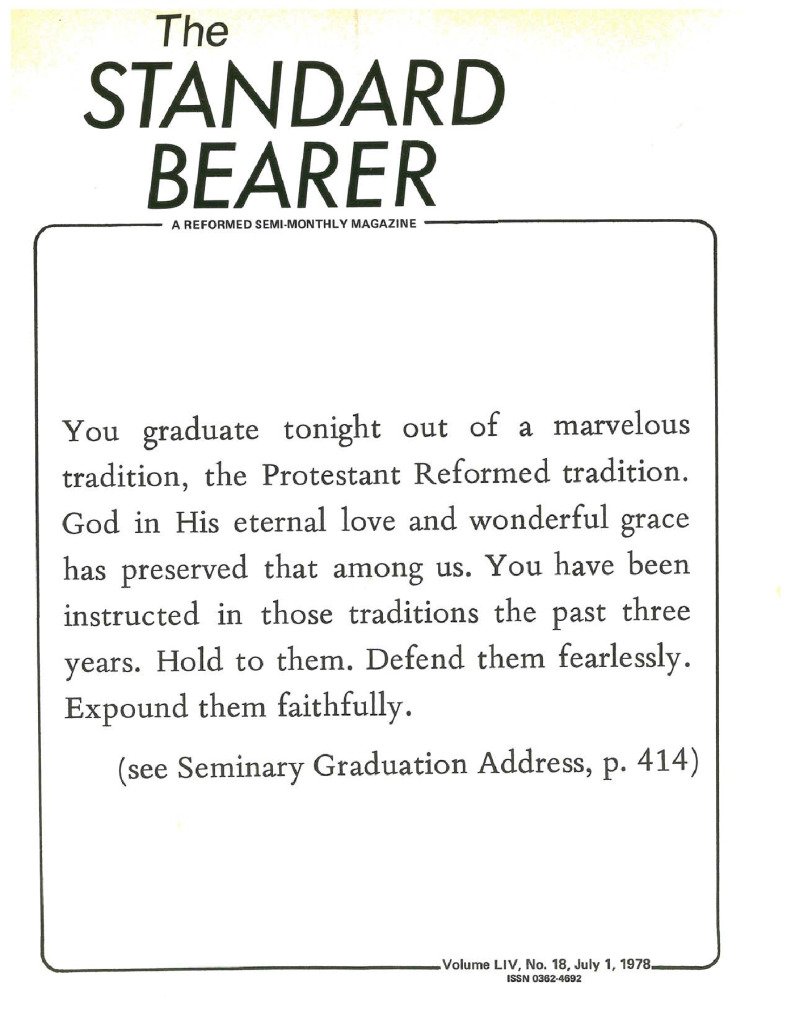