If we are to be effective in our pastoral counseling of Christ’s sheep we must have some understanding of how God created man. This seems to me to be essential. There is, of course, a general principle involved here: practice is always based on principle. This is true in all our life, for all of life is practice which flows forth from principle. A man lives always according to what he believes. The same thing is true in pastoral work. The pastoral work of elders and ministers will be based upon what he believes concerning the nature of a man. If he has an evolutionistic view of man, this will determine how he works with a man when problems enter a man’s life. If his labor with God’s sheep is going to be according to the Scriptures, then he must understand what the Scriptures themselves say about man by virtue of his creation by God.

What does it mean that God formed man from the dust of the ground?

I recall when I was going to grade school (I did not have the privilege of attending a Protestant Reformed Christian School, although the school I attended was a Christian School), the teacher made quite a point of it that this creative act of God meant that God formed a kind of a dust man, something similar to a child’s making a snowman when the snow on a winter day is just right for packing. This dust man stood there without life until God came and breathed into it so that it stirred into life and suddenly began to walk around as a man.

This is surely not the meaning of the text.

There are others who take the position that that part of the creation of man which speaks of his formation from the dust of the ground refers to the creation of the body; the other aspect, the formation of man by the breath of the Lord God, refers to the creation of the soul. This too is wrong. Rev. Hoeksema in hisDogmatics, comments on this: “In this view man is really two distinct entities, two distinct beings, a physical and a spiritual being, the two being rather mechanically united for a time. Man is really a spirit living in body. The spirit is the life of that body. In death the spirit departs from the body, and as a result the body dissolves. This crude and philosophical conception is even applied to the birth of each individual human being when it is presented as if the body is born from the parents while God creates the soul. Man, according to this view, is really not one being, but two, even as he was created by two distinct acts of the Creator.” (p. 198.)

Quite clearly the Scriptures mean to say by this that, by virtue of the creative act of God, there is a certain resemblance between man and the living creatures created on the fifth and sixth days. The fish and birds were created from the water of this earthly creation; the animals were created from the earth. But man was also created from the dust of the ground. By this creative act of God, therefore, there is some sense in which man is like the animals. This must not be interpreted to mean, however, that man, by virtue of his creation from the dust of the ground, was first created an animal; and then, when God breathed into him the breath of life, God made a man out of the animal. The resemblance is not to be found here. After all, God simply commanded the waters to bring forth fish and birds and God simply commanded the earth to bring forth animals and creeping things. But man was fashioned by the very hands of God. “God formed man from the dust of the earth.” There is something about that expression which indicates that God bestowed some kind of special care in this work of the creation of man. Almost as it were, lovingly, carefully, with great skill, God fashioned man with His own almighty fingers. It was a special act of God and produced a special kind of creature — man, the highest of all creatures, created in the image of God, created as king over the whole earthly creation. Already this expression, that God formed man of the dust of the earth, indicates something special about man which sets him apart from the other creatures which God formed.

Nevertheless, man, along with cows and bears, eagles and snakes, sharks and worms, can be called “a living soul.” He shares something with all these creatures. He is like then in some respect.

What is this similarity? The answer is that, from one point of view, man was created as a part of this earthly creation. He belongs to this earth, is a part of it, stands related to it, cannot escape from it, is dependent upon it; and thus he resembles all these other creatures which God called into being.

This is a very important truth which ought never to be forgotten by us. When man sinned God said to man: “In the sweat of thy face shalt thou eat bread, till thou return unto the ground; for out of it waste thou taken: for dust thou art, and unto dust shalt thou return.” Man was emphatically of the dust. He was of this earth. Here he was placed by God. Here he belongs. From this earth he can never escape.

Already here the idea of the covenant of works goes wrong. The covenant of works teaches that man, if he had remained standing in a state of rectitude for a definite period of time, would have finally been taken by God into heaven. Nothing can be farther from the truth. It is simply a fact that man cannot live in heaven by virtue of his creation. He was not created as the angels, adapted to live in the heavenly creation; he was created as a man from the dust of the ground, able to live only upon this earth. Paul emphasizes this same truth in I Corinthians 15:50: “Now this I say, brethren, that flesh and blood cannot inherit the kingdom of God; neither doth corruption inherit incorruption.” It is true that Paul means here to say that wicked and sinful man cannot go to heaven. But he means more than that. He means to say that it is utterly impossible that we who are created flesh and blood can possibly inherit that which is heavenly. This is not only because sin entered the world; this is also because we are created of the earth earthy. After all, “The first man is of the earth, earthy: the second man is the Lord from heaven.” (I Corinthians 15:47)

Even the elect child of God cannot “naturally” go to heaven. He isn’t created that way. The only way he can possibly go to heaven is by means of a wonderful, powerful, and altogether miraculous wonder of grace through Jesus Christ. By this miracle of grace he is utterly transformed so that he who was created to live only in this world is now able to inherit the kingdom of heaven. This takes a complete change in his very nature which is possible only through Christ. This is what Paul is talking about in I Corinthians 15. We shall not all sleep, but we shall all be changed. This corruptiblemust put on incorruption and this mortal must put on immortality. Our salvation is far more wonderful than we often think.

So, Adam was created to live in this earthly creation. This was his abode. Here he was destined to spend the years of his life. He was of the dust. He was an organic part of this creation. He was connected to it in all its parts. He stood at the head as king; but the fact remains that he was inseparably related to it. He is dependent upon this creation, for he needs the air of the creation to breath, the fruit of the creation’s trees to eat, the water of the rivers of this creation to drink. If he has not these things he will die. He is dependent upon the earth just as are the animals and fish and birds. When he dies he returns again to the dust from which he is taken.

This is what is meant when Genesis 2:7 speaks of his creation from the dust of the earth.

But there is more. Adam was also created by another act of God, for God breathed into his nostrils the breath of life. Here is something unique. Concerning this we read nothing in connection with the creation of any other creature. God created man by a twofold act, one of which resembled the animals and birds, and one of which was unique to man.

So we must ask the question; What does it mean that God breathed into man’s nostrils the breath of life?

But we shall have to await this part of our discussion for another letter. 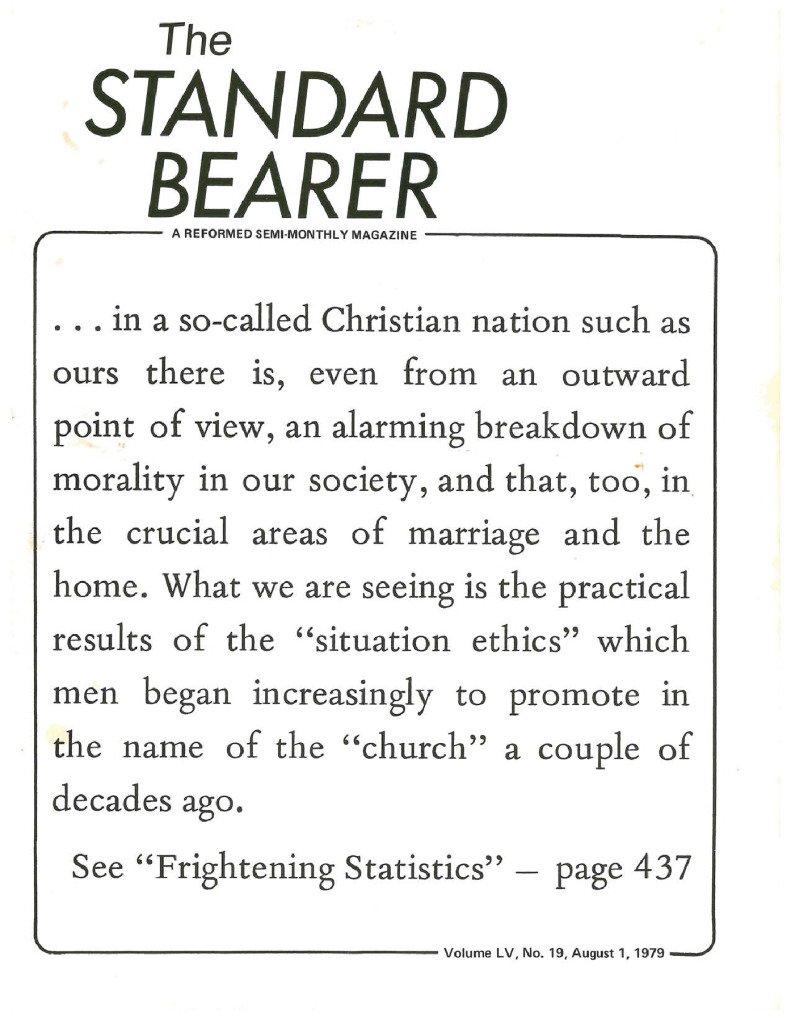