It is time to continue our discussion of the wrongness of separating from the church institute to form small groups of believers who pursue, on their own, the study of Scripture. You will recall that we were discussing particularly the importance of the church institute for the salvation of the people of God. And, more particularly yet, we were discussing the offices of the Church. We talked about the fact that Christ is the chief and only Officebearer in the Church; that His office is reflected in the office of believers; and that the office of believers is exercised through the special offices in the local congregation. The result of this is that each local congregation is a manifestation of the whole body of Christ. One cannot claim to belong to the whole body of Christ without membership in a local congregation.

What has all this to do with the subject under discussion?

In the first place, I must emphasize to you once again that the regenerated and converted child of God who functions in the office of believers can only exercisethat office through the special offices in the church. There is a knotty problem here which is not understood as it ought to be by people even of Reformed persuasion. Yet the principle stands as the central point in all true scriptural and Reformed Church Polity.

There are two sides to this matter. In a certain sense of the word the office of believers is the primary office in the Church. The individual believer, after all, is prophet, priest, and king. In this way he reflects the three-fold office of Christ his Savior and Head. He alone has the anointing of the Holy One. He alone functions in the office which Christ has given him. He is a Christian only when he lives all his life as February 15, 1977 an officebearer. This is true in the Church institute as well. The believer, holding the office which he does, must exercise that office within the congregation of which he is a member.

Perhaps we can drive this point home by pointing out several practical implications of it.

All the work of the church as institute (in preaching the gospel, administering the sacraments, and exercising Christian discipline) is really done by the believers in their office which they hold. This is why they must also be directly involved in all this work. This is why they have the right to reorganize the institute when officebearers do not do their work faithfully.

The Roman Catholic Church, especially prior to the Reformation, refused to recognize the office of believers. The clergy constituted the church; the believers were shut out of it. The believers had no part whatsoever in the affairs of the church, no role to play, no voice in church matters, no right even to investigate the Scriptures to learn directly from them what God revealed. Only the clerics, from the parish priest to the pope, functioned in any kind of office. This same state of affairs is going on today. This is also the case within many different Reformed and Presbyterian Churches. You have, e.g., the fact that the people of God have no more access to ecclesiastical assemblies to air their grievances. One hears again and again that the ecclesiastical channels are blocked, that the common man is ignored, that his voice is silenced, and that only the ministers and leaders in the church have any voice in church affairs. This happens too when much (if not most) of the work of the church is done by committees and boards, by leaders and ministers without the “laity” even being informed of what is going on. But, most importantly, this is happening in the whole area of Bible interpretation. Learned men form committees appointed by one or another ecclesiastical assembly and study matters which directly influence the life of the church. They are mandated to study the extent and meaning of Biblical authority, the question of women in office in the church, the interpretation ofGenesis 1-3, etc. They produce lengthy and verbose reports which are written in such a way that no one can understand what they mean—perhaps not the committee itself; no one really knows what they are trying to say; and no one can really tell in which direction they are steering the church. And it all comes down to interpretation of Scripture. In an effort to establish some kind of position, these learned committees monkey with Scripture, invent various Hermeneutical approaches, come up with verbose explanations of simple texts—all of which is meant to leave the impression that the people of God who hold only the office of believer cannot really understand the Scriptures. Scriptural interpretation must be left to the “experts.”

All this is very dangerous business. God’s people are all officebearers. They need not that anyone should teach them. They have the anointing of the Spirit. Upon them falls the responsibility to preach the gospel, to administer the sacraments, to exercise discipline within the church.

There is a kind of delicate balance here which is the real genius of Scriptural Church Polity. It is not always so easy, perhaps, to maintain this balance; but it must be preserved for the welfare of the church. And when this balance is preserved, then Christ rules over His Church. He rules through His Word which is authoritatively preached by those who are ministers and elders and deacons.

And it is precisely here that the trouble arises in those who turn their backs on the instituted church. These people seem to have the notion that they can function in the office of believers apart from the special offices in the Church. For whatever reason they may do this, they ignore these special offices and separate that which Christ has joined together.

This is the God-ordained way of saving His people. There really is no other way. We must not make ourselves wiser than God and find ways for ourselves which God has not ordained. We must not think that we can break God’s rules for us and retain what God promises only by means of His Word.

We must not be deceived into thinking that this is possible, by listening to glowing accounts of the marvelous edification and spiritual vibrancy which comes through such unofficial meetings apart from the church. God has spoken concerning His way of working. He has told us how Christ rules over our lives. He has said that in this way, in obedience to Him, He will bless His people. It is disobedience to do anything else.

In the second place, this brings up some interesting and important questions which have to be answered. Essentially these questions boil down to one central question (and it is a question which is often asked): If Christ speaks to us and rules over us only through the official ministry of the Word, does not Christ also speak to us in “unofficial” Bible study whether that be in individual Bible study or in Bible study with other saints of God?

We shall have to wait with answering this question until the next letter; but I want to remark now that the relationship between preaching and our personal Bible study is a very rich relationship with many different ramifications.

Another aspect of the whole question which often arises is: How does the preaching of the Word by the church institute stand connected to the Christian’s calling to witness?

Yet another question is: Does God ever save any one apart from the preaching of the Word?

While these questions are only indirectly related to the issue we are discussing, they are important enough, also in the context of our discussion, to spend a little time with them.

And so we must close for now. 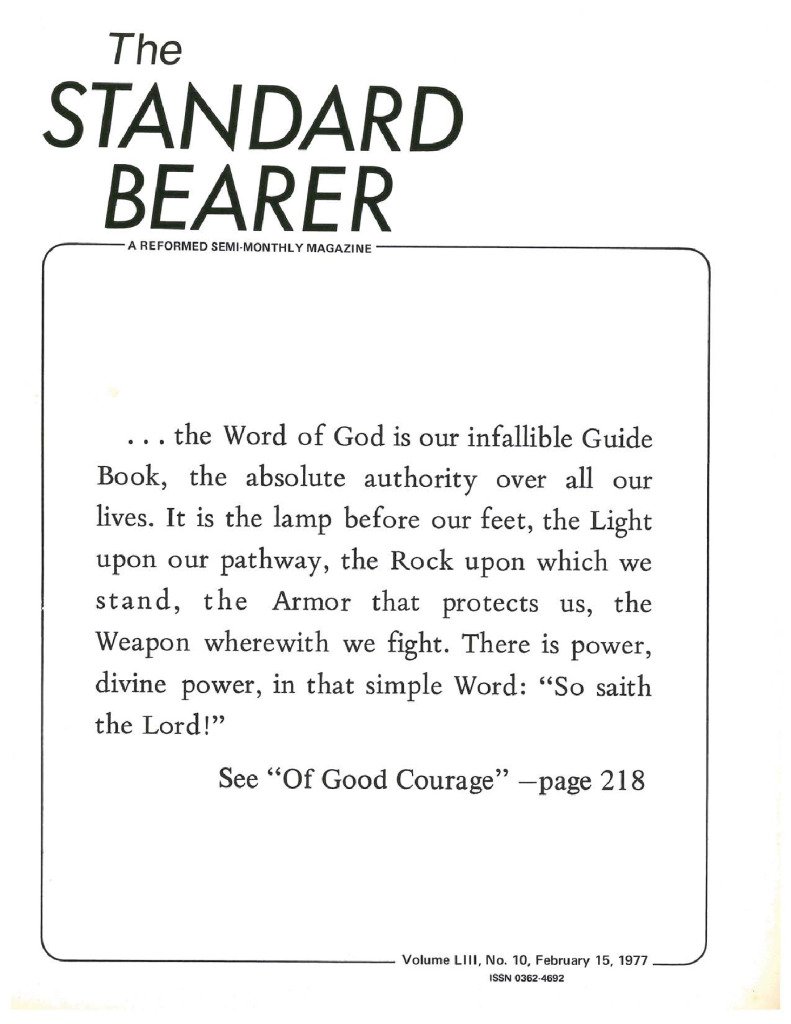