In our last letter we began a discussion of some of the practical aspects of a minister’s life in the parsonage—especially from the viewpoint of Paul’s discussion of these things in I Timothy 4. And we began our discussion with some comments on the need of the minister to “give attendance to reading.” This time I want to talk about the matter of being an example in the congregation. Paul talks about this also to Timothy: “Let no man despise thy youth; but be thou an example of the believers, in word, in conversation, in charity, in spirit, in faith, in purity.” (Vs. 12.)

It might be well to talk about this verse in general for a few moments before we get down to some specific ideas on the matter.

It is very striking that Paul should speak of Timothy as being an example in connection with Timothy’s youth. It is thought (though this is admittedly a guess) that Timothy was about thirty years old when Paul wrote this. Upon him had been thrust the responsibility of the care of the church at Ephesus in which the apostle himself had labored diligently for a number of years. Especially in those days, thirty years old was comparatively young—especially if we think of the fact that this was about the normal time for a man to begin his active work. John the Baptist was about thirty when he began his ministry. So was our Lord.

The apostle mentions a number of specific things in which Timothy must be such an example: word, conversation (or, as we would call it, behavior or manner of life), love, spirit, faith, purity. While it is not necessary for us to describe each one of these elements, it is interesting to note that this Scripture does not make a distinction between that part of a minister’s life which belongs to his official work as a minister of the gospel and that part which is his own personal life—at least, as far as this matter of example is concerned. I recall distinctly a minister telling me, in support of conduct less than exemplary, that what he did in his own personal life was nobody’s business. This is not so. A minister is an example in the whole of his life. And all of his life must be so lived that he may confidently hold up his life as a pattern for the saints to follow.

There is a question which arises in this connection. I recall that you once brought up the question in connection with a discussion we had on this very subject over a cup of coffee. The question involved the exercise of Christian liberty in the life of the minister. As I recall it, our conversation at that time had particularly to do with this responsibility as exercised by a parent in the home who must be an example to his children. But the principle remains the same. The question comes down to this: For the sake of being an example in the congregation, should a pastor refrain from doing certain things which, all other things being equal, he could in good conscience before God do? Should he, in other words, curb his Christian liberty for the sake of being an example in the midst of the flock?

There is a certain aspect to this problem which Paul himself brings up in the early verses of this chapter. Paul speaks a vehement word of condemnation in these verses against evil men who arise in the latter days and who, with consciences seared with a hot iron, forbid to marry, forbid the eating of meats, and apparently, in general, advocate the life of an ascetic. Paul says that this is all wrong. These are evil men and they must be condemned. Every creature of God is good. And because every creature of God is good, it must be received with thanksgiving. And indeed, if it is received with thanksgiving, it is sanctified by the Word of God and prayer.

It is clear, therefore, that also in this respect, you must be an example to the flock. You must live your life in such a way that you clearly show by your conduct that you despise no good creature of God. And indeed, because all these creatures of God are good, they must be used with joy, receiving them at the hand of the Giver of every good and perfect gift.

But there are, nevertheless, certain circumstances in which the minister of the gospel finds himself in his work in a congregation when he must curb his Christian liberty as he uses God’s good gifts in order that he may be a good example. To put it a little differently, a minister must be prepared to sacrifice his own personal enjoyment for the sake of the gospel which he preaches. He must be willing to do without many things because of his calling to preach the gospel. He must be willing to forego certain pleasures, for he must never be a stumbling block to his brethren.

And this is, after all, the point. Scripture speaks of the fact that our Christian liberty is always to be circumscribed by this one principle. Paul writes to the Corinthians: “Wherefore, if meat make my brother to offend (and the meaning here is, stumble), I will eat no flesh while the world standeth, lest I make my brother to offend.” (I Cor. 8:13)

That is the principle, of course, for the whole of Christian life. But it is a principle which applies with double force to a minister of the gospel. And it is clear why this is true. Every saint is, after all, more or less an example to his fellow saints. This is determined, quite naturally, by many different circumstances; and some saints are more of an example, under given circumstances, than others. But this is the point behind this limitation of Christian liberty. We will not cause our brother to stumble unless we are an example to him. But because we are an example, it is very well possible that we, by our conduct, in the exercise of our own Christian liberty, cause our brother to do something in imitation of us which is an offense to his own conscience. And this we must never do.

It is this principle which applies to ministers with so much force. They are examples to the whole congregation because of the unique position which they occupy in relation to the flock over which God has placed them. Because they must come to the sheep of God with God’s Word, they are looked to as examples of the life which the Word of God enjoins. It may very well be that the congregation expects from her pastor as leader and shepherd a life which is near to perfection. And this is expecting too much. A shepherd who is conscientious about his work is always the first to admit that he himself is a sinful man and that the Word of God comes to him as well as to all the sheep. But the fact remains that he lives in the midst of the congregation as an example for all to follow. God wills that this be so. His Word comes to you: “Be thou an example of the believers.”

And in being such an example, your life must be a life which every one of the sheep may imitate—from the weakest to the strongest of God’s sheep. A shepherd is one who calls his sheep to follow him. This is the kind of shepherd you must be. Paul was not at all hesitant to hold up his own life by way of example to the churches. For example, he writes to the Philippians: “Brethren, be followers (and the word here means, more literally, “imitators”) together of me, and mark them which walk so as ye have us for an ensample.” (Phil. 3:17)

But because you must be an example to all the sheep—to strong and weak, to aged and young, to parents and children, to saints in all the varied circumstances of their life—you must, for the sake of being an example, give up many things which you in good conscience before God could ordinarily do.

The word which Paul uses when writing to Timothy is a Greek word from which comes our English word, “type.” You must be a “type” to all those in the congregation over which God has placed you. That is, your whole life must be a pattern according to which all the saints may fashion their own lives. In everything you do, you must be able to say: “God’s people over whom God has placed me may emulate me in what I am now doing and not be guilty of any sin.”

And at the same time you must be sure that your people understand that every creature of God is good and never to be refused if it be received with thanksgiving. In this, too, you must be sure that they are instructed. You are not called to live the life of an ascetic. You are not to engage in some kind of world flight. You are not to leave the impression with God’s people that, although you too possess certain gifts of God, you really would rather do without them, and you have them only because they are necessary evils. This is false sanctity and a hypocritical holiness which makes of God’s gifts something abhorrent. By despising God’s gifts, you despise the Giver Who gave them. Be thankful for them and enjoy them as you sanctify them by the word of God and prayer.

Well, we are nearly at the end of another letter. We can talk about some of the particulars of this calling to be an example in future letters. Let me hear from you if you have any questions.

May God bless you. 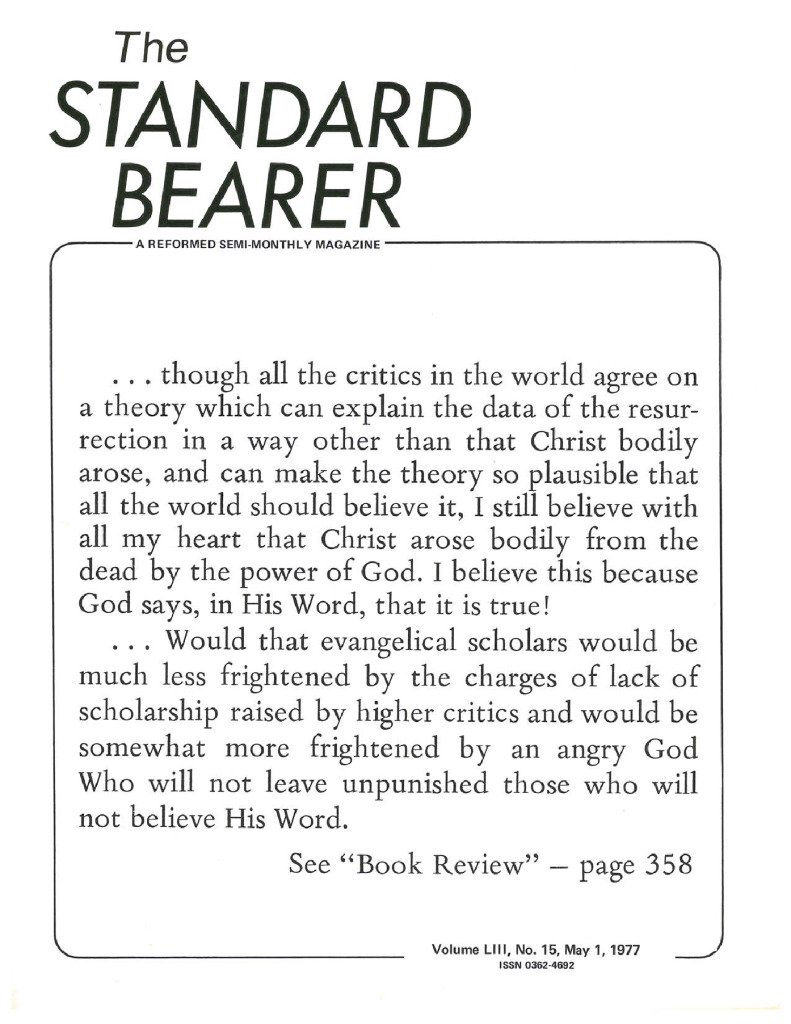