Leading in Prayer: A Workbook for Worship, by Hughes Oliphant Old. Reviewed by: Robert Decker

This is a very good book on a much needed subject. While the emphasis of the book is on the public prayers a minister is called to offer in the worship service, the author has a good deal to say about worship in general.

Prayer is an art, i.e., it is a gift from God. All God’s servants in the ministry must have this gift to one degree or another or they can­not function in the ministry of the Word. But the gift of prayer can be developed. This book will help ministers to do precisely that.

In the introduction Old makes several important points. The first is that spontaneity in prayer, some­thing to be desired in the minister’s public prayers, too often lacks con­tent. It may be sincere, but often not very profound. Hence, accord­ing to Old, spontaneity must be balanced by careful preparation and thought. Spontaneity in prayer must also be supported by an in­tense prayer life on the part of the minister. “One can hardly lead if one does not know the way one­self. Spontaneity has to arise from a profound experience of prayer” (p. 5).

Leading in prayer, Old rightly stresses, belongs to the office, the official work to which Christ calls His ministers. To support this point, Old cites William Perkins, a late 16th century Puritan theolo­gian, who taught that the office of the ministry consisted of two func­tions, “First was preaching and teaching the Word of God to the people of God; second was present­ing the needs of the people before their God … as Perkins saw it, prayer was a prophetic ministry that demanded the same gifts of discernment and inspiration that preaching demanded” (pp. 5-6). One is reminded of Article 16 of our Church Order which lists prayer before the ministry of the Word and the dispensing of the sacraments as the work of the of­fice of the ministry! Old points to the Puritans as worthy examples for us today. They prepared to lead their congregations in prayer by private prayer and by studying the prayers of Scripture.

In this connection Old points to the truth that, “Prayer does have its own language, its own vocabu­lary, and its own imagery. This language is not simply a matter of style … prayer uses biblical lan­guage” (p. 7). Closely related to this, Old correctly reminds us that the Bible provides what he calls “a prayer typology.” By this Old means that the recorded prayers in Scripture are given by God as ex­amples (paradigms) of how minis­ters ought to lead in prayer.

In the first chapter Old con­tends that the worship service ought to begin with an Invocation because this is a profoundly bibli­cal form of worship. “This invoca­tion names the God to whom the prayer is addressed. One might therefore define an invocation as a prayer that begins worship by call­ing on God’s name. The Latin word invocare means to call upon, to appeal to, or to invoke in prayer” (p. 11). The Invocation in­cludes the following elements: 1) It, as Jesus taught His disciples and us, ought to be offered in the name of Jesus. 2) It must include the hal­lowing of God’s name. 3) It must claim God as our God. 4) It must include the petition that our wor­ship be inspired of the Holy Spirit and received through the interces­sion of Christ. In this connection Old stresses that Christian worship is Trinitarian. 5) It should conclude with a full Trinitarian doxology. The chapter concludes with a list­ing of some thirty-six Invocations selected by Old and all based on Scripture. In our churches the “In­vocation” consists of the votum taken from Psalm 124:8, “Our help is in the name of the Lord, who made heaven and earth,” followed by the salutation.

Chapter two is an excellent pre­sentation of “The Psalms as Prayer.” Old points out that the Psalms were used as both prayers and songs by the ancient church. This usage was lost in the Middle Ages, but restored by the 16th cen­tury Reformation. This was true of both the Lutheran and Calvinistic branches of the Reformation. The Lutherans of Augsburg pub­lished a psalter as early as 1531, while in 1537 the Calvinists pro­duced the Strasbourg Psalter, which contained vernacular ver­sions of all 150 psalms. Psalm sing­ing continued for the next 200 years, but lost popularity at the end of the 19th century. It ought to be restored, Old contends, be­cause “the psalms are the prayers and songs of the Holy Spirit” (p. 57). Regular use of the psalms in worship teaches the congregation the biblical language of prayer, and therefore, too, the psalms should be “the core of Christian praise” (p. 58).

Chapter three deals with “Prayers of Confession and Suppli­cation,” elements which we include in our congregational prayers. Pointing to Psalm 51 as an example of this kind of prayer, Old concludes that two things stand out in this Psalm, a deep feeling of lament and the assurance of pardon. Wor­ship, Old correctly emphasizes, must include recognition of our sin. Without this our worship lacks in­tegrity. God is offended by sin and yet He accepts sinners.

Again the Reformation restored this type of prayer. Martin Bucer composed such a prayer for the Re­formed Church at Strasbourg, which became a model for the Prayer of Confession used in Geneva as well as for Thomas Cranmer’s Book of Common Prayer of the Church of England. Matthew Henry, at the beginning of the 18th century in his Method of Prayer, emphasized that the Prayer of Confession should confess both our sinful nature and our particu­lar sins. Reformed Christians rec­ognize that this profound thought occurs much earlier in The Heidel­berg Catechism, Q & A 56.

In Chapter four Old discusses The Prayer for Illumination. This is a brief prayer offered by the min­ister just before preaching in which he asks the Lord to illumine the preacher and open the hearts of the people of God to receive the preached Word. This reviewer is convinced that this is something which must be included in every congregational prayer. It would be even better to have a separate brief prayer for illumination just before the reading and preaching of the Word.

Old offers compelling theologi­cal reasons for this prayer. God reveals Himself, and revelation is an act of grace. Unless the Lord Himself enables the minister cor­rectly to expound the Word and unless the Lord Himself opens the hearts of the congregation the Word can neither be preached nor received with faith and repentance.

This prayer too was lost in the Middle Ages and revived by the Reformers. Old includes in this chapter beautiful prayers for illu­mination composed by Bucer, Calvin, and Zwingli.

The Prayer of Intercession, what we would call the congrega­tional prayer, is the subject of chap­ter five. Characteristic of biblical prayer is that it begins and ends with praise and thanksgiving.

This prayer dropped out of the liturgy of the mass, but was re­stored by the Reformation. In­cluded in this section are excerpts of some of the prayers of the Re­formers.[1] Old concludes the chap­ter with sound advice, “What is important is that the minister regu­larly give time and thought to pre­paring for this ministry. Sponta­neity and preparation should complement each other” (p. 183).

Since we are bound to the use of adopted forms, we refrain from comment on the next two sections of the book which deal with Com­munion prayers. It is interesting to note, however, that many of the petitions in our Communion prayers are found in the Didache, a first century collection of the prayers of the early church! In this section Old makes the interesting comment that the offerings ought to be simple and without ostenta­tion and properly belong at the end of the worship service.

The last section of the book deals with Hymnody, Benedictions, and The Ordering of Public Prayer. Those of us who are committed to exclusive psalmody will be inter­ested to know that psalmody per­sisted from the Reformation until the middle of the eighteenth cen­tury in virtually all branches of the Reformation including the Angli­can. The revivals of the mid 1700s introduced hymns.

Old concludes with a lament that, “For at least a generation we have experienced a sort of atrophy in public prayer” (p. 361). He chal­lenges us to revive the art of prayer in worship. With Calvin Old thinks the congregational prayer ought to follow the sermon. We ought to give this some serious consideration. Prayer, after all, is not something we offer to God, but is the fruit of the Holy Spirit’s ap­plication of the Word in our hearts.

All in all, this is an excellent book on the subject. It will be help­ful to ministers, and through them it will be beneficial for our congre­gations.

[1]  Unfortunately Old omits large sec­tions of the beautiful prayer of Martin Bucer. The complete text of this prayer may be found in Liturgies of the Western Church by Bard Thompson, pp. 175-177. 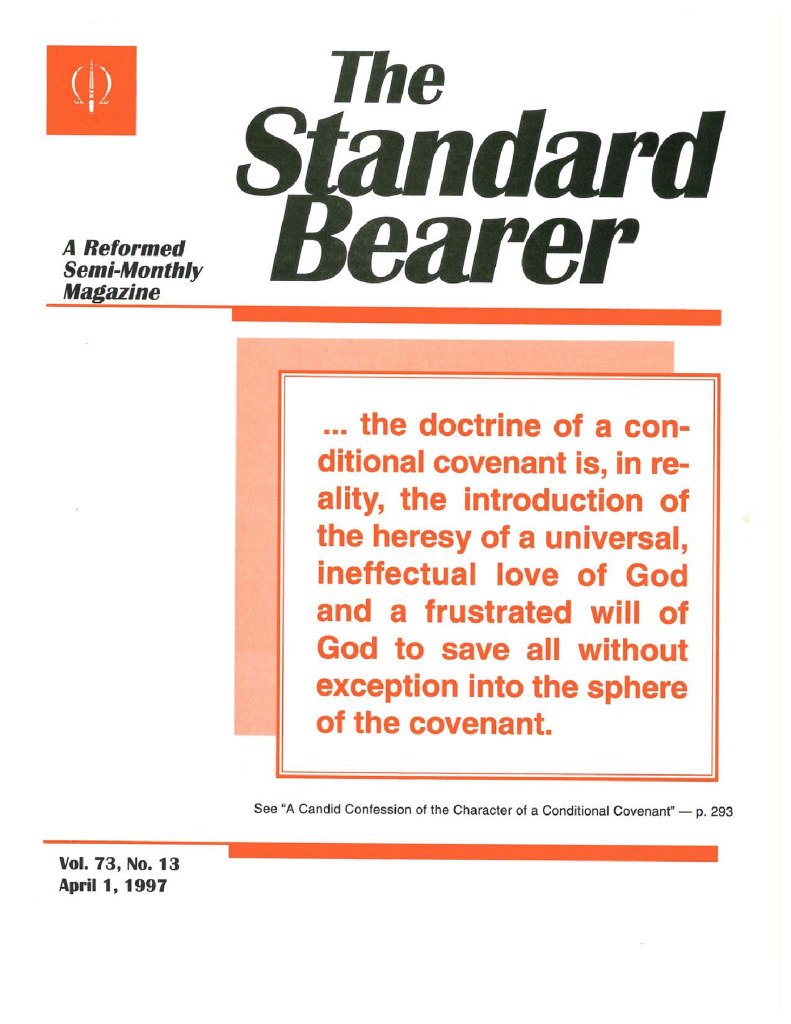