We do well to bear in mind that although we read this of God here in a particular incident in the life of Abraham and Sarah, this is a statement that is always true. God always does exactly as He has said that He will do, and events of which we see and hear are always exactly the thing which He has spoken. Today—and until all that which He has said will come to pass has become fact and history—He is doing as He said; and through the ages whatever happened did take place because God said it would.

This does not mean that we have a record in the Scriptures, or anywhere else, in regard to all that which transpires in time, and that all occurs exactly as that record states it will take place. The Scriptures would have to be bigger than the universe of which they would speak. A speck of dust takes little room, a whole lot less than the five-letter word we use for it. And in far less time than it takes for you and me to state that this speck of dust flitted from one point on the table to another, it is there. It does mean that what the three Persons in the Holy Trinity decreed among themselves, in the silence of eternity, would happen in time, happens exactly that way. It means that the promises and predictions we do find in Scripture are fulfilled in every respect exactly as God told us they would become fact.

Men try to keep their word when it suits them. And when they do we say that they are honest men. We call them trustworthy and men of their word. In fact we even read in Psalm 15:4 that this is one of the signs of those that will dwell with God in His house of heavenly glory. We read, after the question, “Who shall abide in Thy tabernacle? who shall dwell in Thy holy hill?” This answer among others, “He that sweareth to his own hurt, and changeth not.”

But this is so difficult for man most of the time. He may intend to keep his word, but he depends upon God. And when God has decreed that this promise of man, this intention of man shall not be fulfilled and realized, there is nothing that man can do about it. In fact he cannot even say that he is going to do a particular work unless God gives him the breath of life to state it. Only when God has said to Himself in the silence of eternity that this or that is going to take place in this history of mankind do the things which men decide and proclaim as their intent take place.

With no such dependent, changeable creature do we have to do in the matter of our salvation and when we speak of the God in Whom we put our trust. As He said He will do. What He spoke in His Word He still speaks today, and at the appointed time every promise and prediction will be fulfilled at the split second He has picked for it, and in exactly the way that He has determined and declared to us. He Who said that He would visit Sarah and spoke to Abraham and promised a son through Sarah is Jehovah. That name of God Moses uses here in Genesis 21:1, and uses it twice. And in that name God stands before us as the eternal, unchangeable I AM. What is more, He can say I am—rather than I Was, or I Will Be—because He is the Self-Sufficient One, the Independent One Who has all His life in Himself and needs no one or anything outside of Himself. And being the Almighty He has all of the creation which He made at His constant command to use to fulfill every word that He has spoken and every decree He has eternally in Himself.

Here is comfort for the child of God who puts his trust in this mighty and glorious God of our salvation. The cry rises ever more strongly as we rush to the end of time, “Give us something practical and much less doctrine!” In a catechism class some years ago a young man asked me after class, when we had a lesson on the names of God, “Why do we have to learn all these names of God and what they mean?” Well, the answer is quite evident: “Our comfort, and in fact our trust in God goes hand in hand with our knowledge of who, how, and what God is.” Know Him as the One Who does as He says, the One upon Whom we can rely completely, in Whom we can safely put all our trust, and our faith in Him will be strong. There is no faith to practice, if we do not know Him as He truly is.

And wonderful as this truth is in all its broad implications, these words in the first verse of the chapter, have tremendous force and meaning for all that follows in the chapter. Sarah does conceive in her old age. The humanly impossible event takes place. The dead bring forth life. The covenant seed that seemed so impossible is there as big as life, and the other promises of seed as the sand upon the seashore, inheriting the land of promise, and a continuation of the covenant line all now seem so possible and sure. And these words of God’s power and faithfulness must also be borne in mind when in the chapter we read of the persecution of that covenant seed by Ishmael and the difficult calling of Abraham to send Ishmael away. For as true as it is that God keeps His Word and does as He has spoken, it is true that we must not ignore that word or try to break it. Instead we must learn to submit to what He has said and to receive what He sends in meek submission with unshaken trust in Him. It is so easy to close our ears to what He said, or to rebel against it and even foolishly to try to make it so that what He has said will not take place. Our prayers often reveal this to be the case; and we can so quickly—also when, as He said, He sends wars and rumors of wars—pray for Him to change so that things round about us can change. We quickly follow our flesh and forget or ignore the fact that in order to do what He said these wars and rumors of wars must be here so that His Son’s way may be prepared and that Son may come again as He had said and had spoken throughout the day of shadows.

Consider a moment three words which God had spoken thus far in the history of His church and in the unfolding of His covenant. (1) He had promised seed to the woman that would hate the whole kingdom of sin and would crush it in due time. Genesis 3:15. (2) In Isaac would that seed be called. In the line of his descendants would The Seed come Who would by His cross and through His Spirit realize this hatred of sin and love of God and would triumph over the forces of evil for us, to give the death blow by crushing its head in that day of His glorious return at the end of time. (3) Sarah would bring forth this Isaac—Sarah the woman with whom it ceased to be after the manner of women, Sarah who had always been barren, Sarah who had an husband who by this time also was sexually as good as dead. The word of God said that she would be the mother of this seed that in time will bring forth The Seed, which is Christ. Galatians 3:16. What a history there is—all as God had said—between Genesis 3:15, the so-called Mother Promise, and Galatians 3:16! But there it all is with the birth of Isaac and then of Christ together with His death, resurrection, ascension, and presently His return to complete all that which God had said.

Surely here we have the gospel. There is good news because God does as He said. There are glad tidings of great joy because God keeps His word. Upon Him you can depend. The good news which He gives never has a bitter aftertaste. It becomes sweeter as the years go by, and in the everlasting day of rest that comes His mercies will be new every morning.

What is more, God Himself has labeled this as the gospel. He had told Abraham before the conception of the child, before Sarah had laughed upon hearing that she would yet bring forth a son, that his name should be called Isaac. That we read in Genesis 17:19, “And God said, Sarah thy wife shall bear thee a son indeed; and thou shalt call his name Isaac: and I will establish My covenant with him for an everlasting covenant, and with his seed after him.” And that name Isaac means “laughter.” It is for that reason also that Sarah states now in Genesis 21:6, “God hath made me to laugh, so that all that hear will laugh with me.”

The laughter of Sarah after and at the birth of her son, Isaac, is one which all God’s people have, the laughter, the joy of the good news, the glad tidings of great joy that shall be to all people. The birth of Isaac is, the birth of Christ, Who brings spiritual, unending laughter and heavenly joy to all the seed of the woman. Isaac’s birth in the day of shadows is a sure word of God that, when the Sun of Righteousness appears in Bethlehem to dispel all the shadows and bring us the Light, we shall all laugh and sing and shout for joy as He also said in so many passages of the Old Testament Scriptures. The Psalms particularly are so full of it that it is only necessary to make the statement and not endlessly quote the passages. And the prophets also are full of this truth, and they spoke what God said. Therefore, what they write is true and will come to pass.

There is quite a difference between this laughter and the laughter of Sarah when she first heard of the promise of a son, for then she did not take hold by faith of the words that God had said. But now she does, and although she could not see what we now see (being in the shadows while we live in the days after the true Light, which lighteth every man that cometh into the world, has been born) she does speak of a joy and laughter which all who hear of this will have.

All who hear by faith, all who hear in their hearts, all who hear God tell this story, all that hear of the birth of Isaac in its implications for the church of God, will laugh and do laugh with Sarah today. And when, according to what God has said, this Son shall come again, there shall be no sorrow or crying, all tears will be wiped away, and at God’s right hand there are pleasures forever more for all the seed of the woman.

Can we be sure?

Yes, the Lord visited as He said, and He did as He had spoken name Isaac means “laughter.” 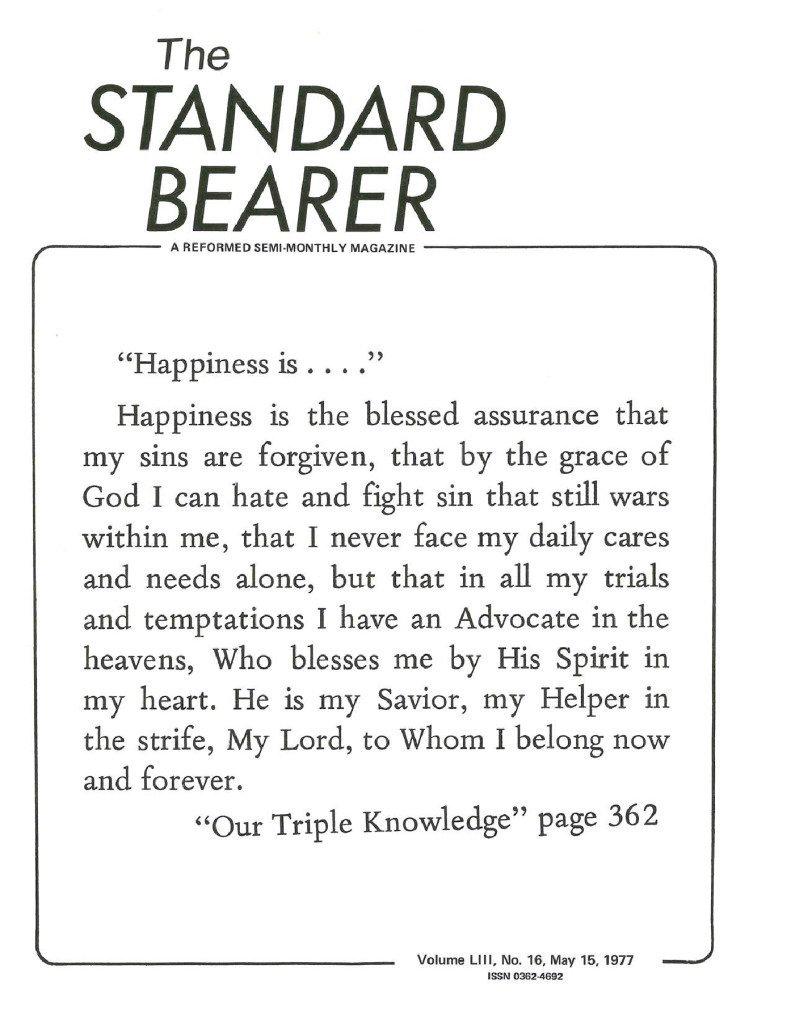