Late this past summer two of our ministers, Rev. David Engelsma and Rev. Marvin Kamps, labored in the ministry of the Word in this village on the Irish Sea. Larne is located some twenty miles northeast of the troubled city of Belfast. The land of Ulster, another name for Northern Ireland; is torn by dissension between the Protestant and the Roman Catholic citizenry. The overwhelming majority are Protestant in name. They wish to remain governed by England. The Roman Catholic minority are determined to bring Northern Ireland under the sovereign rule of the Republic of Ireland, which constitutes the southern portion of the island. When we were in Ireland we read daily of the demonic activities of paramilitary groups of terrorists attempting to foment fear throughout the land. Armored police vehicles and army jeeps, occupied by four or five heavily armed men, rumbled through the city of Belfast.

The political problems of Northern Ireland, however, did not occasion our trip there. As many of you well know, ecclesiastical problems in the Bible Presbyterian Church of Larne occasioned our labors. With this congregation we had established sister-church relationships in 1985. The pastor of this congregation had traveled to our country and, in addition to preaching for us, had also presented the urgent request that we establish sister-church relationships with his flock in Larne. The Protestant Reformed Churches in America were faced with their calling to manifest the love and concern of Christ Jesus our Lord to fellow saints in a distant land.

This request, upon the advice of our representatives, was granted; but the relationship did not last. Winds of change began to blow in the church of Larne. The pastor had determined that he should lead his congregation into the fellowship of the Free Presbyterian Church of Scotland. Several families opposed this new course of direction for various reasons. The fellowship of the congregation was radically disrupted. Brethren were divided. Five families and a few individuals left the Larne Bible Presbyterian Church and its pastor.

Let it be clearly stated that we take no delight in the disruption of the fellowship of this congregation. Church troubles are heartrending. They are to be avoided at all cost if it is possible. The blessed communion of the saints should be a most cherished possession. But oh how the Devil labors to set brothers against brother and to silence the witness of the church of Christ.

The five families that had left the Bible Presbyterian Church turned to the Protestant Reformed Churches in America for help. They grieved over the breaking of the sister-church ties, for they had learned to appreciate our churches for our commitment to the Reformed faith, which we believe to be the gospel of God. These five families had lost their church home and sought the Lords guidance in prayer. They are not bitter but are saddened by the turn of events that cost them their church home, and now look to God to lead them in the establishment of a Reformed congregation.

A request was presented to our Contact Committee, asking if we would send men there immediately to help them. We declined! Again a request for help was presented to our Synod in June of this year. Synod, after deliberation and debate, acceded to this request. What else could we do? These saints offered to provide for all the expenses of travel and lodging. These saints had been members of our sister church in Larne, and they wished to continue in fellowship with our churches. Would God approve, if we simply abandoned these parents and their children? Should we not send men to preach for and comfort these fellow saints, attempting to encourage them and to aid them in their determination to be organized as a Reformed church?

The five families did not remain idle, while they awaited help from our churches. They organized as the Covenant Reformed Fellowship, rented a building in Larne in which to hold “worship services,” and proceeded with the instruction of themselves and their children and others by means of sermon tapes provided by various of our congregations.

Rev. Engelsma and the undersigned traveled to Northern Ireland separately. We met in Larne on September 3 and spent some ten days there. Our stay was brief, due to the fact that both of us had pressing schedules to keep. Especially was this true of Rev. Engelsma, who would begin his labors as our newly elected professor in our seminary. Rev. Engelsma found it necessary to return to the States and his home on September 10, while the undersigned remained in Larne to preach for the Covenant Reformed Fellowship on September 11 and then to return home on Monday the 12th.

Though our stay was brief, our labors were many. Worship services were held twice each Lords Day in Larne, September 4 and 11. In addition, on Saturday evening a speech was given to introduce the Protestant Reformed Churches in America to the public that was invited to hear our messages. Further, every evening Monday through Friday, a sermon was preached.

All our meetings were well advertised by the C.R.F. in the various local papers. We held meetings not only in Larne but also in two villages some twenty miles distant, Ballymena and Newtownabbey. Flyers containing a schedule of our meetings and the topics addressed were distributed. The C.R.F. had exerted itself in order to call men and women to hear their witness to the Reformed faith.

During the week we gave five sermons on the doctrines of grace, i.e., the so-called tulip doctrines. Rev. Engelsma gave three of the five sermons and the undersigned two. These were one-hour-long sermons, which were thankfully received. The members of the C.R.F. expressed themselves as in full agreement with these messages and found them edifying. All the members of the group faithfully attended all the meetings.

To all our services the public was also cordially invited. When all factors are taken into consideration, we believe the meetings proved very successful. With the exception of the two Sunday morning services, all the meetings were attended by visitors. The largest number of visitors was twenty-two and the smallest was seven. What was especially encouraging was that many of these men attended all the weekday services. After each session they remained for some time to visit and fellowship with us and to pursue some of the points raised in our sermons. We found that the majority of the visitors were, indeed, appreciative of our witness.

What will be the fruit of our labors we do not, of course, know. Will others be led of the Spirit of God to join this fellowship? We certainly pray that this will be the case. But, as in all labor in Gods Kingdom, the fruit must be left to Gods sovereign determination. We planted and watered; to God be the increase! The Covenant Reformed Fellowship is of the same mind. To pray and work—that is our only task.

There are two families (in addition to the five) that, though not members of the fellowship, nonetheless appear to be dedicated to its cause. One widow lady and her adult son attend every evening service. The other is a married man with two young children from the city of Belfast. Besides, we saw in attendance two young single men who showed great interest. May it please the Lord to lead these saints also to join the Fellowship.

The Covenant Reformed Fellowship members expressed themselves as desiring to establish a Protestant Reformed Church in Northern Ireland upon the basis of God’s Word as interpreted in our three forms of unity. They have asked that a missionary be sent to labor among them and their people. Our churches are attempting to send a man there for several months before the Synod of 1989 meets, in order that the situation may again be evaluated at that time.

Your emissaries have reported to the Contact Committee of our churches and have brought specific requests and recommendations to this Synodical Committee for action.

During our brief stay with these believers we learned to love them for their zeal in the faith. We were warmly received into their communion and into their homes. When it was time to leave them, a feeling of sadness came over us.

I cannot conclude this report without commenting about the need for laborers in Gods vineyard. We are in urgent need of ministers of the Word. More and more we receive requests for help from saints throughout the world. Reformed preaching is in scarce supply. The world is afloat with preachers of whom the apostle wrote: “For we are not as many which corrupt the word of God . . . .” Where are the young men who prayerfully consider the ministry of the Word as their calling before God? Where are those who are compelled for the truth’s sake to give themselves to the preaching of salvation through Christ Jesus according to Gods purpose of unconditional election. Many of our own churches are vacant. We hear daily as it were cries for help. Will the sons of the church and their fathers not give themselves in prayer to God concerning this great need? Do not be so quick to say, the Lord will provide. Surely He will. But it is for us to ask if the Lord is pleased to provide for His church through us.

It was the recommendation of Rev. Engelsma and me to the Contact Committee that our churches exert themselves to help the C.R.F. in any way we can. May it please the Lord Jesus, that great Bishop of our souls, to send one of His servants to Larne for the ministry of His glorious gospel of sovereign grace. 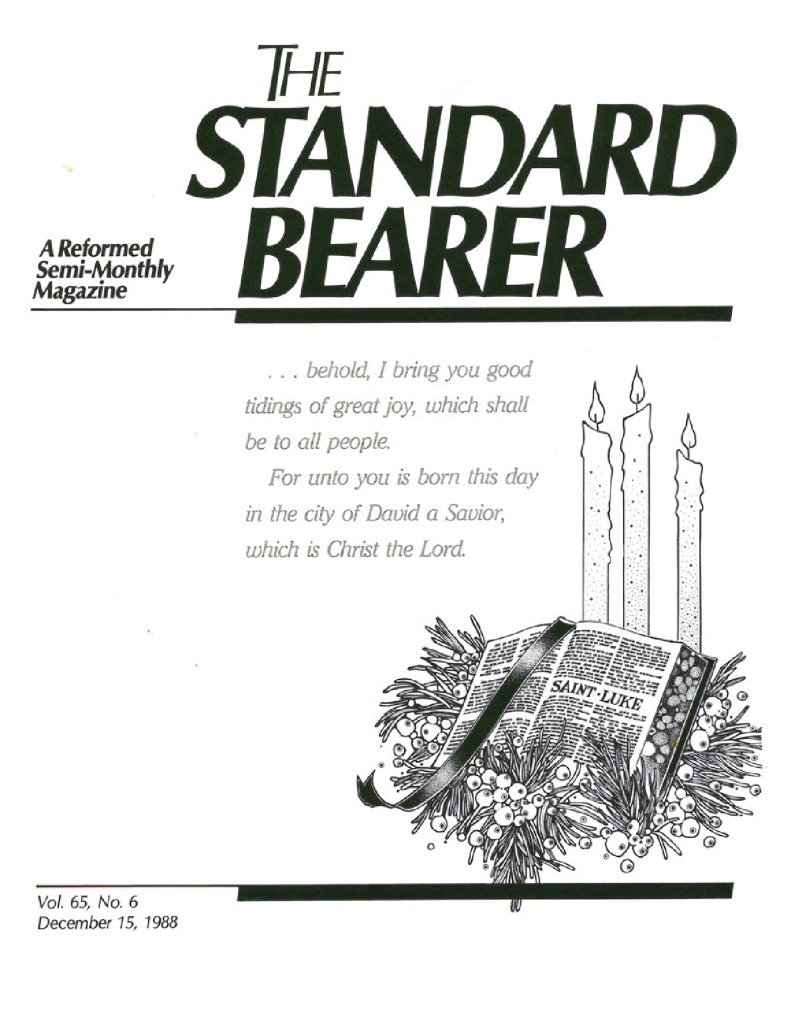