Labor Bill Dead for this Season

Labor Bill Dead for this Season

In our April 1, 1978 issue we reported to you concerning a threatening labor “reform” bill which was before the United States Senate. We urged our readers at that time to write to their senators and to express their opposition to the pending bill.

This is a progress report concerning this labor bill. Senator Robert P. Griffin has kept his constituents who expressed concern about this matter informed. Recently I received the following letter:

“As far as this session of Congress is concerned, labor law reform is dead.”

Those were the words on August 7 of AFL-CIO President George Meany. He referred, of course, to the so-called labor “reform” bill (s. 2467) proposed by President Carter and passed last year by the House of Representatives.

I am glad to report that Mr. Meany’s assessment also reflects the general attitude now prevailing in the Senate.

As you know, after almost five weeks of extensive debate and six cloture votes (cloture is an attempt to cut off debate, HCH), the Senate finally adopted a motion on June 22 recommitting S. 2467 to the Human Resources Committee. Since then, the Senate has taken no further action on the bill, and none is expected.

During the course of the long battle over this ill-conceived legislation, messages such as yours were encouraging and effective.

I wish to thank you for your interest and your support in connection with this important matter.

With best wishes, I am

For the time being, therefore, the threat of this bill becoming law is over. Most likely, however, an attempt will be made to revive the bill at a later session of Congress.

Along with his letter, Senator Griffin enclosed a reprint from the Congressional Record in which is found a transcript, of his address to the Senate on June 9, 1978. The following excerpt from this address serves to show that representatives and senators do pay attention to mail from their constituents:

Mr. President, in the past, congressional debates over labor legislation have been among the most intense, controversial and bitterly fought of all legislative battles. The debate and controversy surrounding this bill are no exceptions to that tradition.

We have no illusions, of course, as to the motivations of those opposed to this legislation. The mere fact of such opposition does not mean that opponents share the motivation of the Christian employer or employee who are opposed to worldly unions and membership therein. Nevertheless, as Christians we may and ought to add our voice to the opposition and to state our Christian motivation. And if through such expressions we can stave off—albeit only temporarily—the tyranny of the worldly labor movement, so much the better!

That even from a worldly viewpoint and from the viewpoint of one who is willing to recognize the labor movement and to allow it a legitimate place in our society and under the law of the land this is a bad piece of legislation is made plain by Senator Griffin in the address from which we have already quoted. He goes into great detail in his criticism and in his suggestions as to reforms which he favors; and we cannot quote the entire address here. But the following excerpt rather clearly states his evaluation of the shelved legislation:

As one who has been somewhat involved in the development over the years of labor legislation, I have a strong interest in the bill before us. Shortly after President Carter presented his proposals in this field to Congress last year, I expressed my agreement with the professed objectives of his program; namely, to make NLRB procedures fairer, prompter and more predictable, and to protect the rights of organized labor and management by strengthening NLRB sanctions against those who break the law. These are worthy goals—indeed, I have been pursuing such objectives since I came to Congress nearly 22 years ago.

Unfortunately, the bill which was introduced to achieve the President’s objectives not only falls far short but is a biased and unbalanced piece of legislation that completely ignores workers’ rights as well as the public interest. I cannot support it.

President Carter, Secretary Marshall, and other proponents of this bill have attempted to sell the legislation as merely a “procedural streamlining” of our labor relations laws. The implication is left that no basic changes in labor relations policy are really intended.

The kindest way in which I could characterize that representation would be: Hogwash!

Let us call a spade a spade. The primary purpose of this bill is to facilitate union organization. Period. The effect of its enactment would be to tilt the delicate balance of Federal labor policy in favor of union leaders and away from individual workers, small businessmen, and the public. This bill is concerned solely with promoting the rights and interests of unions as unions—as entities in and of themselves.

The greatest weakness and the most notable defect of this bill is not what is in it—but what is not in it. Ignored and left out of this bill is recognition that others besides unions need consideration and protection. In the rush to give unions more organizing muscle, this bill brushes aside the rights of individual workers and small businessmen, as well as the public.

Meanwhile, it ought to be evident, even to the world, that this is not at all the time to give a big labor more power and more protection under law. For the social and economic chaos which result from organized labor’s flexing its muscles is reaching into the circles of government itself.

To the child of God, who views things in the light of God’s Word, this is surely evident. For it is becoming ever more clear not only that covetousness motivates the strivings of organized labor, but what is worse, the principle of revolution! I refer to the fact that in recent months we have witnessed the spectacle of strikes and threatened strikes against the government itself. There was a time—not too many years ago—when even the mention of a strike on the part of government employees was a thing unheard of. But today strikes by public school teachers have become common. Wildcat strikes by postal employees have taken place, and it was only under the threat of an official strike by the postal workers unions that the Post Office went back to the negotiating table. Still worse, more than one large city this summer has been caught in the throes of a strike by the very employees responsible for public safety. Not only have firemen gone on strike, in defiance of the law; but also policemen, the very men who are sworn to uphold and to enforce the law, have, contrary to the law, gone on strike. This is anarchy. It is revolution. In addition, we have witnessed the spectacle of governments, whether local or national, being either unwilling or unable (or both) to resist such revolution and to punish the perpetrators, but instead kowtowing to their demands and agreeing to negotiate.

Part of the problem is, of course, that the law of the land has increasingly, over the years, given aid and comfort to organized labor. The deepest problem is, however, that this country was founded upon the principle of revolution, a principle which increasingly permeates every facet of life in our times.

The Christian should be alert to these things, and he must expect that it will become increasingly difficult for him to live—whether in the sphere of labor or in any other sphere—according to his Christian principles. By grace only can we stand! 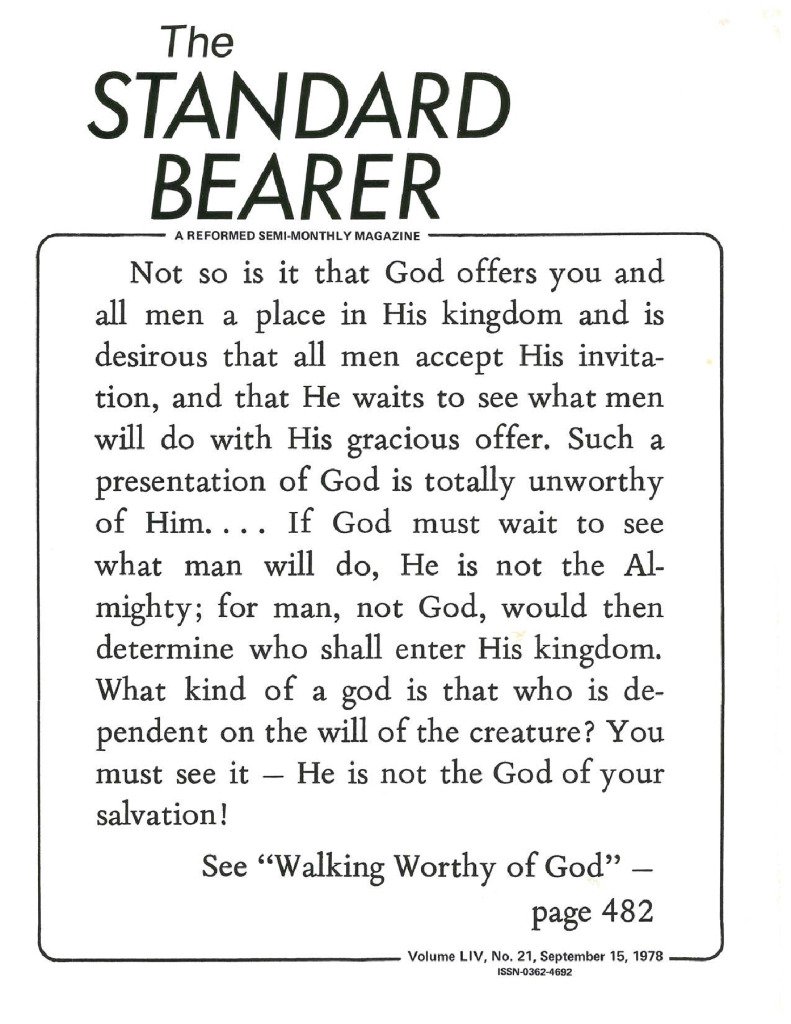