Jude – Contend Earnestly For the Faith

Jude – Contend Earnestly For the Faith

One thing we are most concerned about when considering the welfare of the church today is how to deal with apostasy. True, we are concerned about the general decay in society, the lawlessness of our age, and the utter contempt for that which is good. When this spirit is expressed in the church by disregard for the Scripture, by demanding the right to violate God’s law and go unpunished, and by scoffing at the faithful who follow God’s ways, we become very much concerned. This is apostasy in the church. The book of Jude deals with this important subject.

He describes himself in verse 1 as “servant of Jesus Christ and brother of James.” Ultimately the Author is Christ Who writes through Jude, a shortened form for the name Judas. There were two disciples of Christ named Judas: the one called Thaddaeus, Matt. 10:3, and the other Judas Iscariot, Matt. 10:4. Whether the author of this book was one of them is subject to debate. He only designates himself as servant of Jesus Christ and not as an apostle of Jesus Christ. He also refers to certain “words spoken before by the apostles of our Lord Jesus Christ,” verse 17, seeming to exclude himself. John Calvin considers him one of the apostles and does not find sufficient proof to do otherwise. Besides this, he is “brother of James.” This James was the brother of Jesus, Matt. 13:55, and also author of the Epistle of James. He was a leader in the church at Jerusalem. This makes Jude a brother of Jesus; he is listed in the family, Matt. 13:55 (the Judas there is Jude). If I Cor. 9:5refers to him, and it appears as if it does, he was a married man and traveled about as a preacher. Rather than calling himself “brother of Jesus,” he calls himself “brother of James,” in keeping with the de-emphasis upon the blood tie with Christ. Since his older brother James was well known in the churches, the readers would know his identity.

It is difficult to pinpoint the exact year. There are two different views. The one suggests that it was written between AD. 70-80, after the destruction of Jerusalem and after the writing of II Peter, from which it is suggested Jude quotes (II Peter 2:6, 7). The other view has it written at an earlier period, A.D. 66-70. Most conservative Bible scholars place it during the earlier period. The significance of the date is seen in that it is nears the close of the apostolic age and just prior to the terrible destruction of Jerusalem by the Romans. The people of God in those times needed the warning and comfort of this book.

Keeping with the style of writing letters in those days, Jude identified himself as the writer and then mentions the ones to whom he writes: “to them that are sanctified by God the Father, and preserved in Jesus Christ, and called,” verse 1. This is a complete description of God’s people in the world: called, sanctified, and preserved. From the letter, we cannot learn whether he had any special group of Christians in mind. It is a fact that apostasy was widespread then, and the need for this epistle was general.

He pronounced upon them the blessing of Christ: “Mercy unto you and peace and love be multiplied,” verse 2. Mercy is mentioned first, since this need is critical for the church struggling with apostasy. She needs the love of Christ that delivers them from evil.

The purpose for writing the letter is stated in verse 4. Jude evidently had a different purpose originally (to write concerning the truths of salvation), but changed this due to the need to exhort them to contend earnestly for the faith. There were certain men who justified their wicked deeds and actively taught others to follow them. They, “turned the grace of God into lasciviousness” (lustful, sexual expression). They were antinomian (against the law of God), claiming that grace freed a man from the obligation to keep the law.

From this short letter we learn how terrible these men were. We will list the things mentioned: they were secretive, vs. 4, denied Christ, vs. 4, proud and disdained those in authority, vs. 8; they were ignorant and brash, vs. 10, hypocritical and deceitful, even joined the love feasts of the church, vs. 12; they did a lot of grumbling about some people and flattered others, whichever was to their own advantage, vs. 16, and finally were schismatic, causing division, vs. 19.

Jude shows how bad they were by placing them in the company of wicked men in past history. Those mentioned include the stiff-necked Israelites who complained in the wilderness, vs. 5, the angels who joined Satan in the rebellion, vs. 6, the inhabitants of Sodom and Gomorrah who were homosexuals (going after strange flesh) vs. 7, and the people who lived on the earth at the time of Enoch and persecuted him, vs. 15.

Because of this, Jude declares that God will judge them as he did the wicked people in years gone by. He reminds them that, concerning the rebels in the wilderness, “God afterward destroyed them,” vs. 5; the fallen angels are “reserved in everlasting chains under darkness unto the judgment of the great day,” vs. 6; the inhabitants of Sodom “suffered the vengeance of eternal fire,” vs. 7; and Enoch pronounced upon his enemies, “The Lord cometh with ten thousand of his saints to execute judgment upon all and to convince all that are ungodly among them . . .” vs. 15.

We may ask, why did Jude spend so much time describing these wicked people and pointing out the nature of their sins? The answer comes in verses 17 and 18: “remember the words . . . how they told you there should be mockers.” We must expect to see them and be able to identify them. This is also crucial today. It is so easy to excuse apostasy as ignorance—people mean well, they don’t know any better. The fact is that anyone who justifies the lie and excuses sin is wicked. Such people are brought up within the church, know the truth, but reject it. They are a corrupting influence and must be rooted out.

Jude mentions an important balance which is necessary if we are to deal with apostasy effectively. We must know the error, be strong ourselves, but also be personally concerned for those who walk in sin. Even though he describes their sin in awful detail, he does not say “Let them go to hell,” “kick them out of the church and be done with it.” No, listen: “And of some have compassion, making a difference: and others save with fear, pulling them out of the fire; hating even the garment spotted by the flesh,” vs. 22, 23. Some must be rebuked firmly and severely; others must be gently led to see their evil, using discretion and wisdom. In all instances, sin must be abhorred as a contaminated garment (probably referring to one a leper wore).

He assures his readers that the only hope for safety and salvation is in Jesus Christ, Who is “able to keep you from falling, and to present you faultless before the presence of his glory with exceeding joy, to the only wise God our Savior, be glory and majesty, dominion, and power both now and forever. Amen,” vs. 24, 25.

In a more detailed discussion of this letter, there are three questions that would inevitably arise. We will deal with them briefly.

2. Are the verses 9 (Michael contending with the devil over the body of Moses) and 14, 15 (Enoch’s prophecy) quotations from some apocryphal book, and if so does that lend credence to them? Origin, the church father, claims verse 9 to be a reference to the book entitled, “Asumption of Moses”; and some commentators claim verses 14, 15 to be a quotation from the “Book of Enoch” 1:9. Neither the Asumption of Moses nor the Book of Enoch are included in what we call the Apocryphal Books as listed in Art. 6 of our Netherlands Confession. Two considerations enter here. More than likely the reference is to part of the Jewish tradition that lived in the mind of Jude. It could be a reference without quotation. Even if it is a quotation (something hard to prove or disprove), it would be no different from Paul’s reference to the philosophers (Acts 17:28, Titus 1:12). It would not mean an endorsement of all the ideas, especially not of the apocryphal writings, but simply making a certain point that applied.

3. Were the apostate people referred to (the libertines) the Gnostics of the second century? These people openly taught that sin was of the “flesh” and of no real consequence. We should realize that the spirit of the libertines infects every age, including the New Testament age. The apostles had to deal with it repeatedly: Corinth (I Cor. 5:1-13, 6:13-20, 11:17-22), Colosse (Col. 2:16-23, 3:5-11), Thyatira with the Nicolaitans (Rev. 2:14, 15, 20). This evil spirit reached its culmination in the Gnostics of the second century. The old deviltry of, “let us sin that grace may abound,” Rom. 6:1, has its appeal in every age.

1. What is included in the “faith once delivered unto the saints,” verse 3? Would this be the contents of the entire Bible?

2. Who are the libertines in our day? How could they be “spots in our feasts of charity”? verse 12.

3. Some of these apostates are outside the local congregation and in other churches, yet they claim to be part of the church of Christ. What should be our response to them?

4. Discuss how different methods of approach must be used when dealing with people who are walking in sin, verses 22, 23. Is this even true when correcting children that have different natures? A family, especially with young people, might discuss what this involves.

5. How does this letter show the seriousness of dealing with sin?

6. Contending with the faith involves growing in the faith ourselves. What does this involve? How can this best be done? This letter reveals sharp condemnation of all who teach that it is all right for a Christian to sin. Nothing can be more destructive of Christ’s cause in the world than such a lie and its accompanying immorality.

We do well to contend earnestly for the faith. 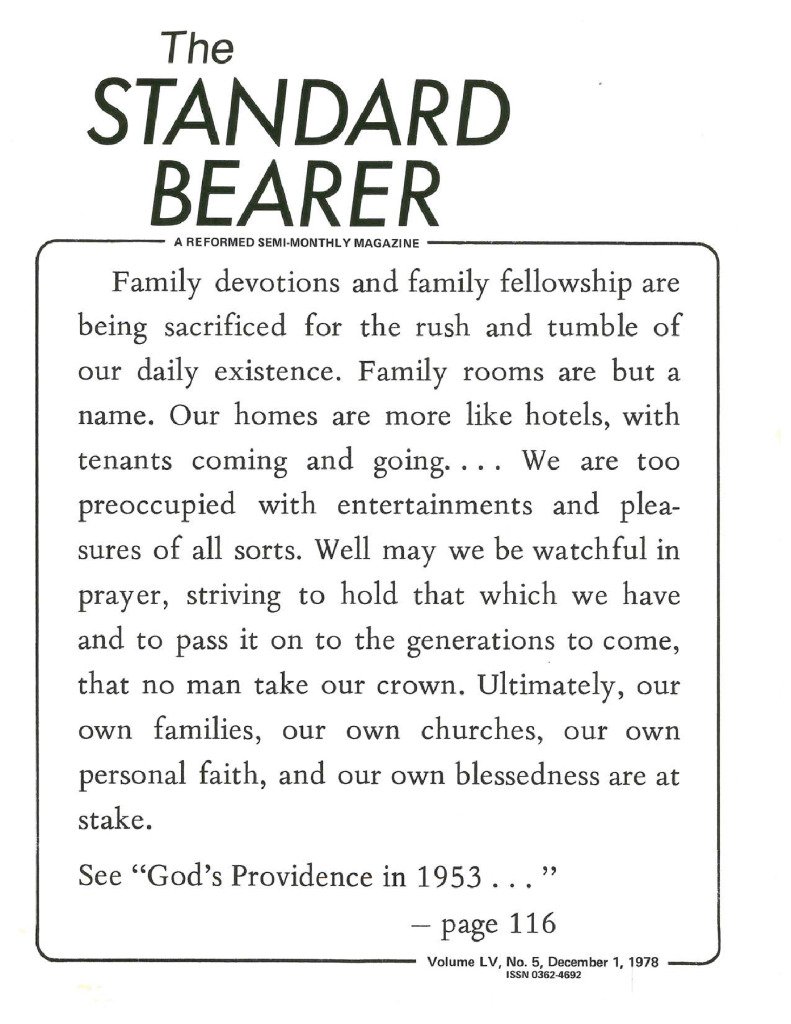