Our tri-star jet sliced through the night as we flew from Detroit to Montreal to London on October 28. Being excited and full of anticipation, rest didn’t come easily. Dinner was served at 9:30 p.m. and after that the cabin darkened. What does a person do in a confined seat, darkness outside, quietness inside? Meditate, listen to music, watch a video, talk, sleep? After we made a few fitful attempts at snoozing, the voice on the intercom dutifully announced that breakfast would he served prior to landing and all the lights in the cabin came on. Time? 1 a.m. We ate and sure enough, a glow of light soon appeared and by 2:15 (or 7:15 a.m. London time), we landed at Heathrow. We cleared customs without a hitch and were pleased to see among the rows of signs, “Welcome Korterings”. Two smiling Van Barens were the bearers. With thanksgiving to Cod, we began our labors in England.

A change of events in our sister church in Larne, Northern Ireland, had forced immediate changes in schedules. Originally, the Bible Presbyterian Church of Larne had asked us to spend ten days in their midst celebrating the occasion of the tenth anniversary of their congregation. Special sermons for the occasion had been prepared, as well as messages for each night, on the Five Points of Calvinism. One week prior to leaving, notice came to the Committee of Contact that the session requested that we not come, due to internal difficulties. This part of our trip was canceled. The committee decided that since our visit to England had been planned by the people there, and public meetings were already announced, it was the part of wisdom to go through with the trip to England. Having completed the labors, we can appreciate that this decision was right. The individuals would have been terribly disappointed had we left them in the lurch. The Van Barens decided to keep their originally scheduled flight and spend two weeks in England on holiday. Hence the Korterings joined them at Heathrow.

There was a distinct advantage to this arrangement. The Van Barens had pioneered with British ways of life. They had “mastered’ such mundane things as shifting with the left hand, traffic circles, pounds (money not weight, which is measured in stones) and language. The British may speak the same language, but it gets a bit tricky with the words they choose, especially if a Yorkshire dialect is added.

A warm welcome awaited us when we arrived in Barnsley, just north of the midlands. There Philip and Pauline Rawson and their three children live, and Philip pastors the Measbro Dyke Evangelical Church. Some of our young people may have met their daughter Stephanie who attended the convention this past summer. Besides having good fellowship with the Rawsons and other members of the congregation, and the kindest of hospitality, we were blessed with the opportunity to worship and discuss the truth of God’s Word. Saturday evening, Rev. Van Baren spoke on John 10:28-29, “Preserved in Father’s Hand”. The next morning Rev. Kortering considered I Peter 1:6, 7, “Rejoicing in Heaviness,” and Rev. Van Baren spoke in the evening on II Cor. 3:17, “The Spirit Works Liberty”. Monday morning a conference of interested adult members of the congregation and area pastors, including John Hooper, who came all the way from Saltash, and became a dear friend, gathered for a speech by Rev. Kortering on “Common Grace and the Antithesis”. During the afternoon meeting Rev. Van Baren spoke on “The Sovereignty of God, Fact or Fiction”. When there is kinship in faith, the tie that binds is felt keenly. We are thankful for the ministry of Pastor Rawson, which includes distributing our books and material across the British Isles, ministering to the little flock of about 25 souls, and establishing contact with concerned people who desire that God’s sovereignty be extolled. May our God care for his family and bless him richly as he seeks to lead his congregation into a deeper appreciation of the Reformed faith. It is a distinct privilege for our churches to care for this work.

For some years, Prof. Hanko has been corresponding on behalf of the committee of contact with Mr. Tony Horne of Bristol. During this time Mr. Horne has been led by God to publish a magazine,The Presbyterian, an excellent attempt to arouse interest in historic Presbyterianism, including allegiance to the Westminster Confession and covenant theology (a thing quite rare in England). The Lord has brought together three men (a fourth is much interested) and they have organized the Bristol-Bath Presbyterian Fellowship. Their goal is to be used by God to arouse interest, and if possible begin a church in the area. Even though our trip was hastily planned, they sought to take advantage of our presence in two ways. First, they advertised a public meeting on the subject of the church, its membership and government. Rev. Kortering spoke on this subject Wednesday evening. Secondly, they desired to learn of us how our worship services are conducted and how we preach. Rev. Van Baren provided this for them on Thursday evening. In some ways, our experiences here were perhaps the most moving for us. The venue (meeting place) was a small stone chapel built before Columbus discovered America. It was built for the alms houses which surrounded the courtyard. Here on the intersection of a busy metropolis with a large coliseum only a block away, which had concerts both nights, and people attended by the thousands, we met with about twenty-four people in the little chapel. They came from Birmingham, about forty miles to the north, and from Wales, 120 miles to the west. None of them who came were new contacts in the immediate Bristol-Bath area. From this point of view it was a bit disheartening, but the joy of the faith of those present made up for it. It was thrilling to hear them sing the psalms, to testify of their love for God’s Word and their willingness to stand alone, if need be, for their faith. They were much appreciative and a bit envious when Rev. Van Baren brought the message on John 10, “Preserved in Father’s Hand’. Here too, the hospitality was superb, we had many unique experiences by being received in their homes for dinner, by their taking the time to show us about the city, and teach us the history of the church as it unfolded in that area. It was good for us to have been there. What the future of this small struggling group is, only the Lord knows. It was a time of encouragement, and the committee of contact will consider possible ways that we can be of assistance to them.

Our final place of fellowship was in Bideford, the southern part of England. Prof. Hanko has been corresponding with Mr. John Hooper of Saltash. His uncle is minister of the Northroad Chapel (Evangelical) of Bideford. When the possibility of our coming to England arose rather suddenly, John was asked if there was any possibility of contact in the area in which he lived. This didn’t appear likely, so Prof. Hanko was advised to contact Mr. Molland of the Northroad Chapel. He has quite a story about how the Lord led him, a farmer, to become the minister of this church. At that point, the chapel was of the Brethren movement (hence his desire to be called Mr.). Upon personal study, he began to appreciate the doctrines of grace and God’s sovereignty, even before he read John Calvin and other Reformed and Presbyterian writers. He was interested in our churches because in his reading he encountered the term “common grace” and he could not understand how there could be such a thing. This interest and the common bond of God’s sovereignty brought about the meetings we had with him and his congregation.

Saturday, meetings were planned for the entire day not only, but he had scheduled speeches of 90 minutes in length. At the morning meeting Rev. Kortering spoke on the history of our churches, how they relate to the Reformation and how they came into existence. Special emphasis was placed upon our rejection of the free offer and our insistence upon the sincere call of the gospel. In the afternoon Rev. Van Baren spoke on “The Sovereignty of God’. Sunday morning Rev. Van Baren used for his text John 2:2, “Christ the Propitiation for our Sins” and Rev. Kortering spoke at the evening service on, “The Resurrection of the Dry Bones”, Ezekiel 37. Here too, the people had come from quite a wide area (about 20 had phoned Mr. Molland to tell him they couldn’t come due to the heavy fog in the area). The Saturday meetings had about 60 in attendance, the services on Sunday about 25-30. What the people appreciate about Mr. Molland’s ministry is that he has careful expository preaching on the Bible, a rare thing in England as well. He has a tape ministry in which he distributes as many as 150 copies of his weekly messages. His publication, “The Link,” is sent throughout the British Isles, and some to the states. Our fellowship with the Mollands was so wonderful. He is a humble man of God who is interested in learning and being found faithful to God. Hospitality in their home and congregation will be remembered.

In conclusion, we make a few observations. One cannot be an expert on the spiritual condition in Britain by a few days visit, and we do not presume this. Rather, receive them as personal observations.

1. Less than ten percent of the people in England worship on the Lords Day. In our country, it is less than fifty percent. This must humble us, for the British Isles were at one time part of the Presbyterian Reformation. Now it is thoroughly secular.

2. Historical Presbyterianism is very rare in England. At best, individuals and small groups are trying to regain some interest in it. One cannot help but ask the question: will God even open the door to consider anew or is it closed? How we must pray for individuals and struggling congregations that they may strengthen what remains and persevere unto the end!

3. Calvinism or the Doctrines of Grace are still taught, but mostly in other than Presbyterian churches. So much independentism and isolation contributes to the ineffectiveness of trying to unite even on the basis of the sovereignty of God. Neo-Pentecostalism is cutting deeply into these fellowships.

4. There is some interest in covenant theology. In this area we are in a position to be used of God by our publications and material for the increase of faith and saving knowledge of the saints there.

We live in the day of little things and the still small voice. May we as churches be warned that our blessings can easily be lost by complacency and spiritual indifference. May the Spirit of Christ keep us alert and faithful. 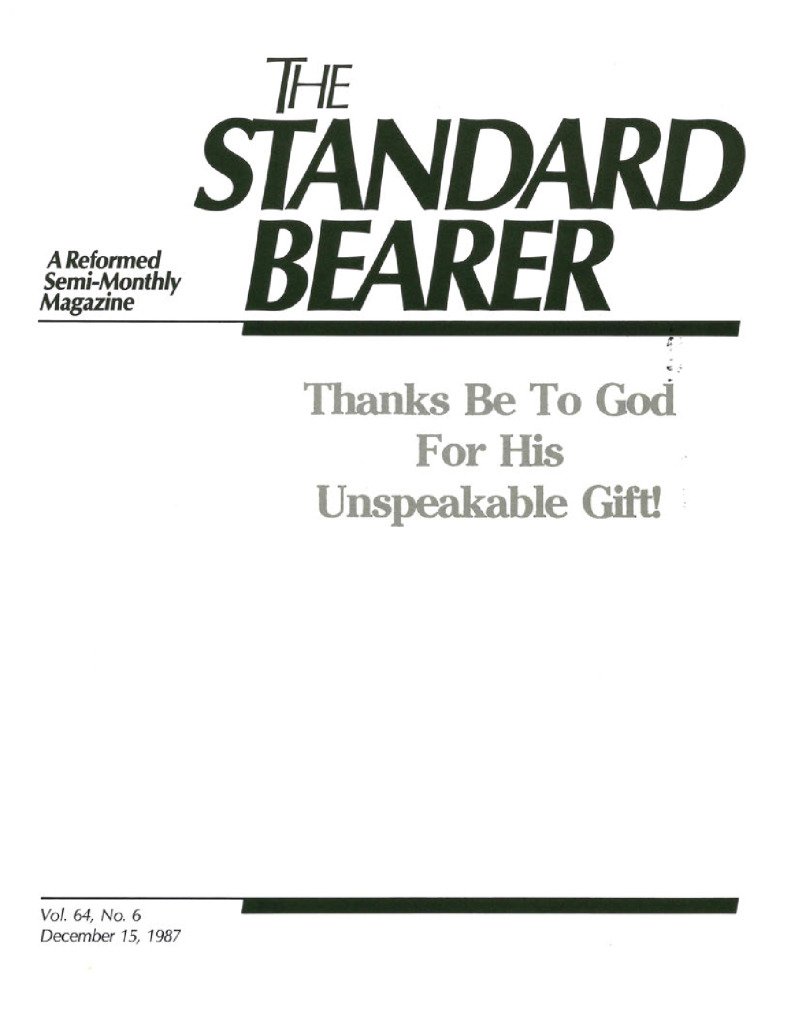