The Book of Joshua follows chronologically upon the events recorded in the Pentateuch. We have seen that the books of Numbers and Deuteronomy deal with the history of Israel that takes them to the very edge of the land of Canaan. They have endured the forty years of the wilderness sojourn, and Moses has been replaced by Joshua as the leader. They are ready to cross the Jordan River.

Having said this, we should acquaint ourselves with the fact that the Book of Joshua is listed in the Old Testament Hebrew Bible under the second division as “The Former Prophets”. We stated before that the entire Old Testament is divided into three main divisions, the Pentateuch, the prophets distinguished as former and latter, and the writings. The former prophets include Joshua, Judges, and both books of Samuel and Kings. The latter prophets include Isaiah, Jeremiah, Ezekiel, and The Twelve (the rest of the prophets).

Quite naturally we ask: why is Joshua listed-under such a division—former prophets? In many study Bibles we find a different division of the books of the Old Testament. Most of them place Joshua, along with other books, under the heading of “historical books”. Quite obviously the content of much of these books is historical. Why in the oldest division is Joshua called a former prophet?

Two schools of thought emerge in an attempt to answer this question. On the one hand, some suggest that the reason is that the authors themselves were prophets. E.J. Young writes in hisIntroduction to the Old Testament, “The second division of the Old Testament canon is called The Prophets, not primarily because of the prophetical contents of the books, but because the authors occupied the prophetical office.” On the other hand, authors suggest that the reason for their being considered prophets lies in the message itself. Keil and Delitzsch write in their commentary: “These four historical writings (the former prophets) have been very justly called prophetical books of history; not, however because they all, but more especially the books of Samuel and the Kings, give very full accounts of the labors of the prophets in Israel, nor merely because, according to the early Jewish tradition, they were written by prophets; but rather because they describe the history of the Old Testament covenant nation and the kingdom of God in the light of the divine plan of salvation, setting forth the divine revelation, as it was accomplished in the historical development of Israel, or showing how the Almighty God and Lord of the whole earth continued as King of Israel uninterruptedly to fulfill the covenant of grace which He had concluded with the fathers and had set up at Sinai and built up His Kingdom, by leading the people whom He had chosen as His own possession, notwithstanding all the opposition of their sinful nature, further and further onwards towards the goal of their divine calling, and thus preparing the way for the salvation of the whole world.”

If we ask which position seems the correct one, the following should be considered.

1. The authors of the “former prophets” are not clearly established. If they are called prophets on the basis of their authors being in the prophetic office, then their authenticity may well be questioned, for their authors are not even known, much less established as being prophets.

2. The content of the books is mostly history. The history is of the nation of Israel as it assumed residence in the land of Canaan. It is intimately connected with the preceding history and forms a basis for that which follows. This leads us to take note of the fact that this is prophetic history. Canaan is a type of heaven and the receiving of Canaan by Israel is prophetic of the church’s receiving heaven at the end of the ages. In the center of all this history is the coming of the Christ, the Messiah.

3. If we consider these books the former prophets and the ones to follow the latter prophets, then we can also understand why Jesus Himself referred to the Old Testament writings as the “law and the prophets”, Matt. 22:40. They constituted the majority of writings of the entire Old Testament.

There is a close connection then between the laws of Deuteronomy and the message of Joshua. As God delivered Israel out of the house of bondage, and preserved them throughout their wilderness stay, so now He gives to them the rest He promised. Their inheritance is sure and steadfast, for it is God’s wonder work alone. That God is the same yesterday, today, and forever. 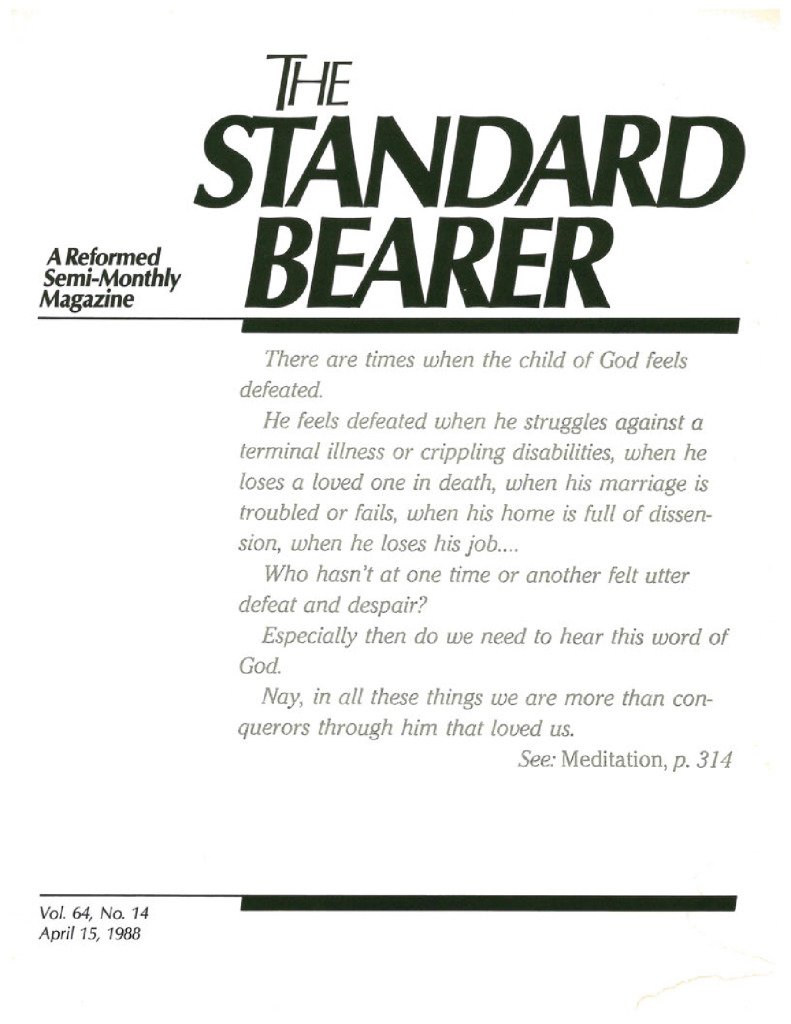