Joined to the living

Joined to the living

We saw last time that one event, namely death, comes upon all, both the righteous and the wicked without distinction. This shapes the lives of the sons of men, who are fallen in sin and who shall die. The reason it shapes the lives of men lies in the finality of death and the contrast between the living and the dead. In setting forth this truth and its implications, Solomon turns, first of all, to a description of this contrast in its various elements. This is similar to his approach in Proverbs, where he frequently makes various observations before drawing a conclusion.

“For to him that is joined to all the living there is hope: for a living dog is better than a dead lion” (Eccl. 9:4).

The text, first of all, sets before us the sphere of human activity, the road of life in which a man walks under the sun. It embraces all his earthly existence as he interacts with other men and the life of the creation. He is united or joined to it. It is his allotted place under the sun. God, his Creator, gave him that place, uniting him to all the living in a bond of earthly life.

In that life there is hope or confidence that arises out of being joined to the living. The hope or confidence spoken of here is not the eternal hope of the believer, but the daily expectation, planning, and activity of a man as he goes about his life under the sun. It is something we tend to take for granted, though as believers, we make it also a matter of prayer (James 4:15). The wicked live out of the same form of confidence of life, but their hope is rooted in themselves and their plans and desires. Though outwardly the earthly lives of believer and unbeliever are similar, the internal spiritual principle is markedly different.

But death, coming suddenly, often without warning, hovers over that life of men as a dark cloud. That union with the living is, in reality, very tenuous, for we are creatures of the dust and like the grass of the field that passes away. Nor does man have power over death. Solomon has said, “There is no man that hath power over the spirit to retain the spirit; neither hath he power in the day of death: and there is no discharge in that war; neither shall wickedness deliver those that are given to it” (Eccl. 8:8).

“For a living dog is better than a dead lion” (Eccl. 9:4). To draw out the comparison, Solomon uses what may have been a colloquial proverb with a contrasting picture. The dog mentioned is not a household pet but a scavenger who slinks down dark streets and across the fields, much like a coyote. Its character here is not so much its cunning but that it is an animal that shies away from danger, having a strong sense of self-preservation and caution. By contrast, the lion is bold and fierce, ready to stand its ground, roaring its presence. The term “better” in the text does not have a moral connotation. The figure applied to people is one of the contrast between shrinking self-preservation and brave courage. The admired lion, however, is dead; his boldness leads to his destruction. The slinking dog lives, for he knew when to run away. The dog’s lot is better because he abides among the living; he yet has hope in the world. The lion is a rotting carcass and has ceased from the earth.

Solomon then states the point more plainly: “For the living know that they shall die: but the dead know not any thing, neither have they any more a reward; for the memory of them is forgotten” (Eccl. 9:5). The living have yet a portion under the sun, though with the knowledge that this present life shall end. They can still plan and carry out the activities of life. For the dead, the door of life has closed, and that closing is final. The rewards or present benefits of life, its fruitful activity, have ceased. Their place and portion under the sun is taken away by death; even their name in the world departs and is forgotten.

Solomon expands this latter thought, “Also their love, and their hated, and envy, is now perished; neither have they any more a portion for ever in any thing that is done under the sun” (Eccl. 9:6). This is the grim reality of death under the sun. It is exactly this that also makes the life of man one of transient vanity. Death takes everything from him in this world in a moment. Solomon uses vivid language to drive home his point: his love, his hatred, his envy perish. All his plans and purposes, all his desires for good or evil are ended. He has no more any portion under the sun. Death shuts the door of this present life forever. As we contemplate what the text is saying, we must keep in mind that the viewpoint is that which can be seen under the sun. Solomon is not rejecting the higher realities of judgment, salvation, eternal life, and death. But that cannot be seen under the sun, as he has said previously: “Who knoweth the spirit of man that goeth upward?” (Eccl. 3:21).

In contemplating this, we must keep in mind that God is sovereign over the affairs of life. God brings us into this world, and appoints our place and calling, our portion under the sun. God gives life, but God also is sovereign over death to close the door of life and take us from this world under the sun. Having described this reality of death, Solomon sets before us the first conclusion he would draw, and does so by exhortation. He would address the believer, particularly in his youth, as he walks the pathway of life. He is still leading us to the conclusion he will make in chapter 12:1—“Remember now thy Creator in the days of thy youth….”

Therefore, he comes with the exhortation: “Go thy way, eat thy bread with joy, and drink thy wine with a merry heart; for God now accepteth thy works” (Eccl. 9:7). The calling to enjoy the things of this present life is a point he has made before. They are good gifts of God to His people by the labor of our hands as our daily bread. That enjoyment is also a privilege, for the wicked are in bondage to covetousness, as he has shown.

He adds here a basis for that exhortation, that our works are accepted with God, or already pleasing in His sight. The picture is of one who, remembering his Creator and covenant God, serves Him in his labor and his work as a sacrifice of thankfulness pleasing to God. This thought he develops more fully, for it comprises the believer’s response to the reality of death and the present purpose of his or her life. That response is one of present joyful thanksgiving before God in the things of this life, knowing that although they shall also end, being transitory, it is the portion that God has given us in His grace (Eccl. 9:9).

Solomon gives us a number of injunctions in connection with this exhortation. He says, first of all: “Let thy garments be always white; and let thy head lack no ointment” (Eccl. 9:8). The picture is one of joy and rejoicing, of celebration and thanksgiving, both in the color white and in the anointing of the head with oil. While the figure refers to our daily earthly life, it has also an underlying spiritual connection, for white is also the picture of cleansing from sin, of the white robes of salvation and righteousness. Likewise the refreshment of oil poured upon the head in a hot climate, making the face to shine, is also a picture of the anointing of the Spirit and His blessing.

This rejoicing with a merry heart is the rejoicing of one who walks in covenant fellowship with God, in His forgiving mercy and with a good conscience before the Lord. His inner spiritual blessings come to expression in his joyful daily walk in the things of his life.

To this walk he then adds a second element, namely the blessing and gift of marriage: “Live joyfully with the wife whom thou lovest all the days of the life of thy vanity…” (Eccl. 9:9). “Live,” or more literally, “look upon life with the wife whom you love,” again draws a picture of daily life, through which we walk under the sun. In that life under the sun God has set the blessings of marriage that we may walk together in communion of life. Marriage is for this life. It too belongs to the things that pass away. By it God enriches the life of His people and works the blessings of His covenant.

This thought he further develops: “Live joyfully with the wife whom thou lovest all the days of thy vanity, which he hath given thee under the sun, all the days of thy vanity: for that is thy portion in this life, and in thy labour which thou takest under the sun” (v. 9). Food and drink, rejoicing in this present life, and marriage, all belong to this life, which is transitory. The days of our life are the days of that transitory vanity, a point made twice in the text to emphasize that truth; but they are also our portion from the hand of God. They are God’s gift to His people who walk in the fear of His name. Rejoicing in them with contentment and thanksgiving belongs to that portion.

He then adds the labor we take or in which we labor under the sun. For that too is given of God, by His design. Yes, that labor is one of toil in a passing thing that does not abide. We are not to cling to it, nor to earthly riches, for they shall end in death. But our labor is also that which God has given, and therein lies the real foundation for the meaning and purpose of our life. By our labor we serve Him. The calling, therefore, is to stewardship, to diligent and faithful labor that is fruitful, not in itself, but in the service of God.

Thus he concludes: “Whatsoever thy hand findeth to do, do it with all thy might; for there is no work, nor device, nor knowledge, nor wisdom in the grave, whither thou goest” (Eccl. 9:10). Now in this present life is the time of work, of planning and carrying out those plans or devices. Death will close that door and with it all that belongs under the sun. Serving the Lord—that labor is not in vain, for it is accepted of God in His grace. 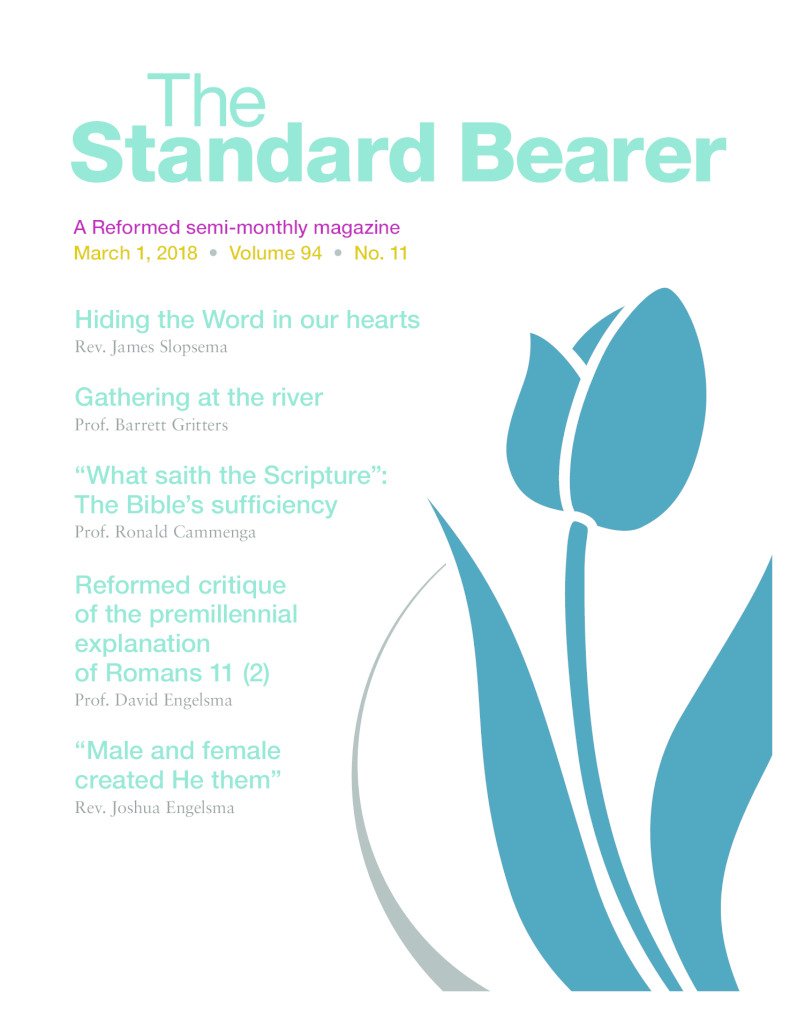