Rev. Shand is pastor of the Winnaleah congregation of the Evangelical Presbyterian Church of Australia.

Though John Wycliffe (c.1329-84) died some 130 years prior to Martin Luther’s nailing of his ninety-five theses to the church door in Wittenberg, he is rightly described as “The Morning Star of the Reformation.” The sixteenth century Reformation did not arise in Europe as something entirely new and unconnected with the past, but it had a lengthy gestation period, arguably beginning with Wycliffe. Luther is often credited with igniting the Reformation, but many of the views that he espoused had previously been articulated by Wycliffe and John Hus of Bohemia (c.1372—1415). A sixteenth century Bohemian Psalter insightfully portrays the connection between the three, depicting Wycliffe striking the spark, Hus kindling it into a coal, and Luther blowing it into a great flame.

Perhaps the most telling witness of the enduring and powerful influence of Wycliffe upon those who followed him comes unwittingly from the Council of Constance (1415). It was that Council that condemned Hus to a martyr’s death. Having first identified Wycliffe as a pseudo-Christian and a notorious and obstinate heretic some thirty-one years after his death, the Council proceeded to anathematize him, ordering his bones to be exhumed and scattered “far from a burial place of the church.” The connection between Wycliffe and Hus, who was appearing before the Council, was unmistakable, nor was it denied by Hus, leading the Council to these conclusions:

The most holy general council of Constance, divinely assembled and representing the catholic church, for an everlasting record. Since a bad tree is wont to bear bad fruit, as truth itself testifies, so it is that John Wyclif, of cursed memory, by his deadly teaching, like a poisonous root, has brought forth many noxious sons, not in Christ Jesus through the gospel, as once the holy fathers brought forth faithful sons, but rather contrary to the saving faith of Christ, and he has left these sons as successors to his perverse teaching. This holy synod of Constance is compelled to act against these men as against spurious and illegitimate sons, and to cut away their errors from the Lord’s field as if they were harmful briars, by means of vigilant care and the knife of ecclesiastical authority, lest they spread as a cancer to destroy others.

Hus, being one of the noxious sons of Wycliffe, the Council continued:

Although, therefore, it was decreed at the sacred general council recently held at Rome that the teaching of John Wyclif, of cursed memory, should be condemned and the books of his containing this teaching should be burnt as heretical; although his teaching was in fact condemned and his books burnt as containing false and dangerous doctrine; and although a decree of this kind was approved by the authority of this present sacred council; nevertheless a certain John Hus, here present in person at this sacred council, who is a disciple not of Christ but rather of the heresiarch John Wyclif, boldly and rashly contravening the condemnation and the decree after their enactment, has taught, asserted and preached many errors and heresies of John Wyclif which have been condemned both by God’s church and by other reverend fathers in Christ, lord archbishops and bishops of various kingdoms, and masters in theology at many places of study. He has done this especially by publicly resisting in the schools and in sermons, together with his accomplices, the condemnation in scholastic form of the said articles of John Wyclif which has been made many times at the university of Prague, and he has declared the said John Wyclif to be a catholic man and an evangelical doctor, thus supporting his teaching, before a multitude of clergy and people.

Without doubt, the teachings of Wycliffe were radical—radical in that they touched the stronghold upon which the power and authority of the Church of Rome were based. He challenged the accepted doctrine of the nature of the church. In so doing, he questioned the role of the papacy and the priesthood. In close association with his views on the priestly office, Wycliffe also condemned the doctrine of transubstantiation, the doctrine that in the Lord’s Supper the bread and wine become the actual body and blood of Jesus Christ.

The tyranny and corruption of the papacy led Wycliffe, as they had Augustine before him, to make a distinction between the true church and the mixed church. He defined the true church as the congregation of the predestinated, the body of all the elect, a body that included the living, the dead, and those yet to be born. Membership in that body was determined by God Himself. Of that body, Christ alone was the head; for a church with two heads would be a monster.

Spelling out the implications of his doctrine, Wycliffe observed that some persons, in speaking of the “holy church, understand thereby prelates and priests, monks and canons and friars and all that have the tonsure, … though they live ever so accursedly in defiance of God’s law.” But this was far from being true, popes, cardinals, and priests finding a place among those who were not saved.

Unlike his contemporaries, Wycliffe denied that men needed an earthly priest to intercede on their behalf in order that they might approach unto God. He proclaimed the priesthood of every believer and encouraged each man to approach directly unto God through faith in Jesus Christ. He emphasized the need for every believer to see the importance of Christ alone as the only sufficient way of salvation, without the aid of pilgrimages, works, and the Mass.

Consequently, Wycliffe declared the right of every Christian, clergy and layman alike, to know the Scriptures and to have the Scriptures in his own language. For hundreds of years no eminent teacher had advocated the right of the common man to the Word of God. The Bible had been a book for the clergy, and the interpretation of its meaning, a matter for the church. Indeed, the Council of Taloulose (1229) had forbidden the use of the Bible by the laity.

Despite his death in 1384, the spiritual legacy of Wycliffe lived on through the teachings of Hus. There was a close alliance between England and Bohemia due to the marriage of Richard II of England to Anne of Bohemia. Consequently, Bohemian students, such as Jerome of Prague, studied under Wycliffe at Oxford. Jerome propagated Wycliffe’s teachings in Prague. Through his contact with Jerome, Hus became thoroughly familiar with the teachings of Wycliffe. Convinced of much of what Wycliffe taught, he began to teach and preach the same things, particularly as regards the nature of the church and the authority of the Scriptures. It was those doctrines that led him to be summoned before the Council of Constance in 1415.

Hus literally adopted Wycliffe’s view of the church. The close affinity between the two is evident from a comparison of Wycliffe’s and Hus’ treatises on the church, both titled De Ecclesia. The arrangement, the ideas, and the arguments in the two works are very similar.

Like Wycliffe before him, Hus defined the church as the body of elect.

…it appears that the holy universal church is one, the church which is the totality of the predestinate, including all, from the first righteous man to the last one to be saved in the future. And it includes all who are to be saved who make up the number, in respect to the filling up of which number all the saints slain under the altar had the divine assurance that they should wait for a time until the number should be filled up of their fellow servants and brethren,

For the omniscient God, who has given to all things their weight, measure and number, has foredetermined how many shall ultimately be saved.

Like Wycliffe, not only did Hus define the church as the body of the predestined, but he also declared that Christ was the head of the church.

These quotations from the saints show that the holy catholic church is the number of all the predestinate and Christ’s mystical body—Christ being himself the head—and the bride of Christ, whom he of his great love redeemed with his blood that he might at last possess her as glorious, not having wrinkle of mortal sin or spot of venial sin, or anything else defiling her, but that she might be holy and without spot, perpetually embracing Christ, the bridegroom.

Hus, like Wycliffe, maintained that not everyone who formed part of the church institute was part of the mystical body of Christ.

Hus attacked the whole of the sacerdotal system. He drew a clear distinction between apostolic commands and papal mandates. According to Hus, no command was binding on the believer that was not clearly based on the Scriptures. The Scriptures were the supreme rule of faith and life.

The threat that Hus’ views posed to papal authority and to the whole sacerdotal system was plain. The pope was not supreme, nor infallible; the church did not consist of the pope and the cardinals, it consisted of those chosen by God from eternity; Christ was the head of the church, and access to the Father was through Him.

From Hus, the teachings of Wycliffe, as regards the nature of the church and the authority of the Scriptures, passed to Luther, Zwingli, and Calvin, and into the teachings of the Reformation. Luther’s affinity with Hus became evident during his disputation with John Eck at Leipzig in 1519. That disputation centered on the authority of the Pope and the infallibility of the church. Eck maintained that the Pope was the successor of Peter and the vicar of Christ by divine right; Luther asserted that such a claim was contrary to Scripture and a concoction of the Roman pontiffs.

During the debate, Eck charged Luther with being a follower of Hus because of Luther’s appeal to the supreme authority of the Scriptures. Luther initially declined to associate himself with Hus due to his condemnation by the Council of Constance, but on mature reflection Luther declared that Hus had been unjustly condemned by that Council. Responding to the charge that he was a Hussite, Luther declared,Ich bin ein Hussite (I am a Hussite). He concluded his response:

I am sorry that the learned doctor only dips into the Scripture as the water spider into the water—nay, that he seems to flee from it as the Devil from the Cross. I prefer, with all deference to the Fathers, the authority of the Scripture, which I herewith recommend to the arbiters of our cause.

Wycliffe was the “Morning Star of the Reformation.” He was the first light that began to dispel the gloom of a long night. Contrary to the determination of the Council of Constance, Wycliffe was a very fruitful tree. He contributed substantially to the Reformation. Through his teachings, many sons were brought to a knowledge of the truth of the gospel. He continues to bear fruit to this present day. 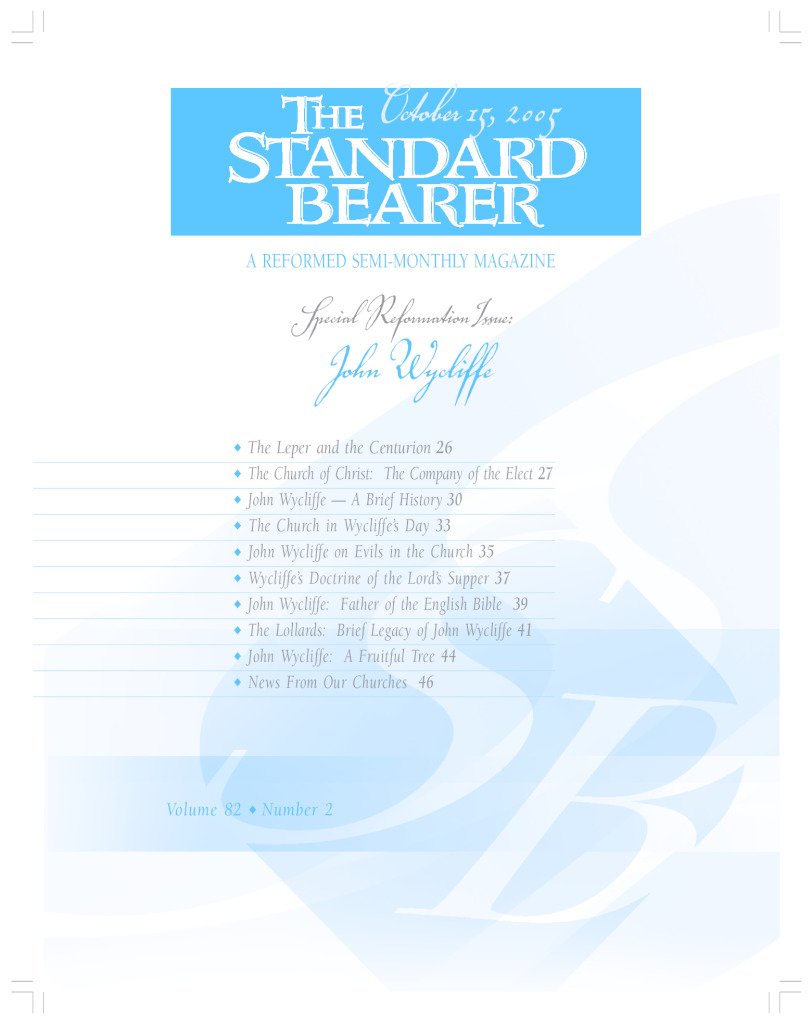