. As we approach this fourth Gospel, we notice immediately that it is not just another account of the ministry of Jesus. It is unique in many respects from the synoptic authors (Matthew, Mark, and Luke). Some of these differences we must consider in this article.

Apart from recent attempts to claim that the Gospel of John was written by a group of scholars that lived at Ephesus, almost all Christian tradition holds that John, the beloved disciple, wrote this Gospel.

Quite naturally, we turn first of all to the Gospel account itself to see if there is any evidence as to who the author might be. In chapter 21:24-25 we read, “This is the disciple which testifieth of these things, and wrote these things: and we know that his testimony is true. And there are also many other things which Jesus did, the which, if they should be written every one, I suppose that even the world itself could not contain the books that should be written. Amen.” In the immediately preceding context, the disciple is further identified. There Jesus said that Peter would be carried where he didn’t want to go, indicating that Peter would die a martyr’s death. Thereupon Peter turned to John and we read, “Then Peter turning about seeth the disciple whom Jesus loved following; which also leaned on His breast at supper and said, Lord which is he that betrayeth Thee? Peter seeing Him saith to Jesus, Lord and what shall this man do?” The answer is that this other disciple will live to an old age. The designation, “disciple that Jesus loved,” is a personal reference to the author, who is John, and who was reclining close to Jesus during the last Passover.

Other evidence that can be gathered from the Gospel writing itself is as follows. The author was a Jew, familiar with the Jewish expectation of the coming Messiah (1:19-28), and with the Jewish insistence that the only proper place for worship was Jerusalem, (4:20). The author was acquainted with Jerusalem. He identified the Pool of Siloam at which the blind man had to wash his eyes to remove the clay (9:11). He also points out that Bethany was about 15 furlongs from Jerusalem (11:18). He freely identified Bethsaida and Cana as cities of Galilee (1:44; 2:1). Further, the author shows knowledge of Jewish tradition: “Then cometh He to a city of Samaria which is called Sychar, near to the parcel of ground that Jacob gave to his son Joseph. Now Jacob’s well was there” (4:5-6).

There are references made to the fact that the author was an eyewitness to the things that took place. We read, “And the Word was made flesh and dwelt among us (and we beheld His glory, the glory as of the only begotten of the Father) full of grace and truth” (1:14). Referring to the blood and water that came from the pierced side of Jesus, he wrote, “And he that saw itbare record, and his record is true; and he knoweth that he saith true, that ye might believe” (19:35). There are particular details that the author could not have known had he not been there, e.g., the hour at which Jesus sat by the well (4:6); the size of the pots that contained the water which was changed to wine (2:6); the weight and value of the ointment that Mary used in anointing Jesus (12:3,5); and the detail in the trial of Jesus (chapters 18 and 19).

This all leads us to conclude without doubt that the disciple of John wrote this Gospel.

What then do we know of John?

From the Gospel accounts, we learn that John was a son of Zebedee. His brother James is usually mentioned first, since he was older. Zebedee was in the fishing business and employed his two sons along with other hired servants. Perhaps among whom were Andrew and Peter (Matt. 4:21-22 and Mark 1:20, John 1:40). This would indicate that he was a man of sizable wealth. This may also explain why John was acquainted with the high priest in Jerusalem. He may have represented his father’s business interest there (John 18:15,18). John was a disciple of John the Baptist prior to being called by Jesus (John 1:39). This first call to leave John the Baptist was followed by a more permanent call to become fishers of men (Mark 1:16-17). John’s mother, the wife of Zebedee, was Salome. She too gives evidence of wealth in that she is mentioned among the women who ministered to Jesus of their substance (Matt. 27:55-56). It is quite well established that she was the sister of Mary, Jesus’ mother (John 19:25), which would make Jesus and John cousins. This explains from a natural point of view why Jesus commended the care of His mother to John (John 19:26-27).

Being disciples of Jesus, he and his brother James developed close fellowship with Peter, and the three of them became an inner group with Jesus. In all honesty, John referred to himself as the “disciple whom Jesus loved.” He was the closest to Jesus at the last passover (John 13:23). All three of them assumed a prominent role in Jesus’ ministry. Examples of their being along with Jesus at special moments include the transfiguration (Matt. 17:1-8) and the Garden of Gethsemane (Matt. 26:37).

John and his brother James were called by Jesus, Boanerges, or sons of thunder (Mark 3:17). One asks, why? There are certain incidents which give us a clue as to the meaning. When Jesus traveled through Samaria and the people refused ordinary hospitality, James and John asked Jesus if they should call fire down from heaven to consume them (Luke 9:14ff.). Their mother Salome, requested for her two sons that they might sit in the kingdom, one on the right side of Jesus and the other of the left (Mark 10:35ff.). Also, when John saw one cast out demons who was not a follower of Jesus, he forbade him; but Jesus corrected him for this conduct (Luke 9:49ff.). From this we learn that sons of thunder describe their fiery nature, their unsanctified zeal for Jesus, that had to be controlled and submitted to the will of God.

After Jesus’ death and resurrection, John is seen often in the company of Peter. They must have stayed together during the time when Jesus’ body was in the tomb and they were among the first to come to the open grave and “see and believe” (John 20:8). He was with Peter when the lame man was healed by the temple (Acts 3:1). John and Peter are both mentioned inActs 8:14 as having been sent to Samaria after they heard that some had received the gospel. According to Galatians 2:9ff and Acts 15:6 Peter and John, along with James the brother of Jesus, are mentioned as being in Jerusalem during the great synod that decided whether the gentile converts should be circumcised. We might note here that by this time his brother James had been killed by Herod (Acts 12:2).

The church fathers, Irenaeus, Theophilus, Ignatious, etc. agree that John left Jerusalem, probably around 66 A.D., the beginning of the Jewish War, and resided in Ephesus for many years. During this stay in Ephesus he preached and taught, thus influencing the early New Testament church. Later he was banished to the Isle of Patmos (Revelation 1:9) during the reign of the Roman monarch Domitian (81-96 A.D.), was allowed to return to Ephesus during Nerva’s reign, and died sometime during the reign of Trajan. By this it is evident that the words of Jesus proved true, that he outlived Peter and lived to be an old man (John 21:18-23).

The Gospel of John was written by the Apostle John toward the end of the first century, the later 90’s A.D. It was written during the latter part of John’s residence in Ephesus. The significance of this can be appreciated if we remind ourselves that the other Gospels, Matthew, Mark, and Luke, were all written sometime during the 60’s A.D. John was written some 40 years later. By now John was an old man. He was eyewitness to the events of Jesus’ ministry, he led the early church at Jerusalem, he outlived his brother James, Peter and even Paul. The church was going through great trials, the threat of heresies from within, the blood-bath of Rome from without. The Holy Spirit moved the old veteran to take up his pen and write yet another Gospel.

This leads us to consider the unique character of John’s Gospel. It stands in contrast to the other three. Let us hear from the pen of John the purpose he had in writing, “And many other signs truly did Jesus in the presence of his disciples, which are not written in this book; But these are written, that ye might believe that Jesus is the Christ, the Son of God; and that believing ye might have life through His name” (John 20:30-31). The Holy Spirit calls us to believe that Jesus is the Son of God!

In developing this theme, John is not interested in the details of Christ’s ministry. Other Gospel accounts have already done that. Rather, John writes on the main subjects that Jesus taught, and he considers only the events that show that He is indeed the Son of God. It is interesting to observe that, apart from the passion week events, there are only two events recorded in John’s Gospel which are also mentioned in the other Gospel accounts: the feeding of the 5000 and Christ’s walking on the water. More than one third of the Gospel concerns itself with one 24 hour period, that prior to and including the crucifixion (chapters 13-19). Of the 1000 days of Christ’s ministry on earth, John touches on only twenty.

The Gospel of John reflects maturity. This is in two ways. First, it shows that maturity in the subject matter chosen. From the opening words this is evident, “In the beginning was the Word and the Word was with God and the Word was God, the same was in the beginning with God” (John 1:1-2). Christ Jesus is the WORD! Long before He was born of the Virgin Mary, He existed with the Father, He participated in the creation, and now is the true light that shineth in the world. The miracles He performed, the instruction He gave, the suffering and death He endured, all point in one direction to show that Jesus is the Son of God, and that as such He is indeed Savior.

Secondly, this Gospel reflects maturity in the manner in which John handles the material. He sets forth the truth as objective reality. He is a faithful chronicler of events that have indeed taken place. He sets forth the facts of Jesus’ ministry as real history. In addition to that, John does it in such a way that he leads his readers in joining him as he grows in understanding these great truths. From the beginning he inserts, over and over, the honest observation that they saw His glory but did not understand many of these things at the time (seeJohn 2:22 and 12:16). This is a meaningful teaching aid to assist the reader in order that he may believe that Christ is indeed the Son of God. When we first read of this, it seems impossible. We can identify with John in this lack of understanding. But, we must not stay there, the Gospel leads us ultimately to the resurrection and the Living Lord Who instructed Peter and all the disciples to “Feed my sheep” (John 21:17). 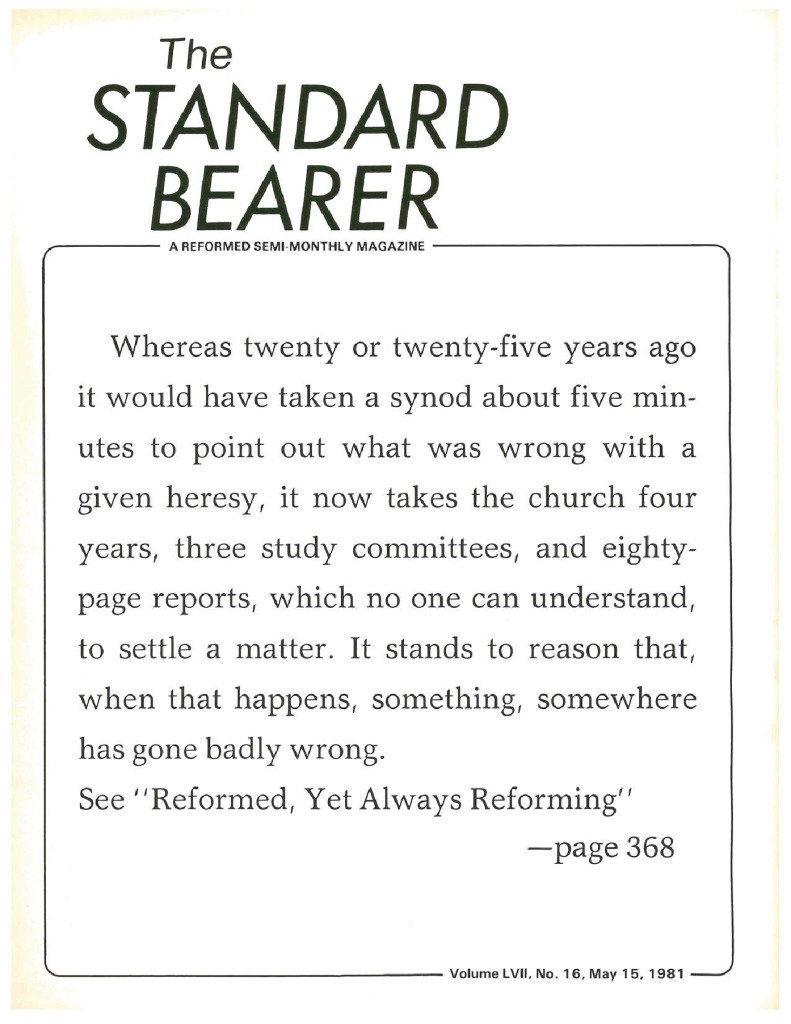