As to public prayers, there are two kinds: the one consists of words alone; the other includes music. And this is no recent invention. For since the very beginning of the church it has been this way, as we may learn from history books. Nor does St. Paul himself speak only of prayer by word of mouth, but also of singing. And in truth, we know from experience that song has a great power and strength to move and inflame the hearts of men to invoke and praise God with a heart more vehement and ardent. One must always watch lest the song be light and frivolous; rather, it should have weight and majesty, as St. Augustine says. And thus there is a great difference between the music that is made to entertain people at home and at table, and the Psalms which are sung in church, in the presence of God and His angels. Therefore, if any wish rightly to judge the kind of music presented here, we hope he will find it to be holy and pure, seeing that it is simply made in keeping with the edification of which we have spoken, whatever further use it may be put to. For even in our homes and out of doors let it be a spur to us and a means of praising God and lifting up our hearts to Him, so that we may be consoled by meditating on His virtue, His bounty, His wisdom, and His justice. For this is more necessary than one can ever tell.

Among all the other things that are proper for the recreation of man and for giving him pleasure, music, if not the first, is among the most important; and we must consider it a gift from God expressly made for that purpose. And for this reason we must be all the more careful not to abuse it, for fear of defiling or contaminating it, converting to our damnation what is intended for our profit and salvation. If even for this reason alone, we might well be moved to restrict the use of music to make it serve only what is respectable and never use it for unbridled dissipations or for emasculating ourselves with immoderate pleasure. Nor should it lead us to lasciviousness or shamelessness.

But more than this, there is hardly anything in the world that has greater power to bend the morals of men this way or that, as Plato has wisely observed. And in fact we find from experience that it has an insidious and well-nigh incredible power to move us whither it will. And for this reason we must be all the more diligent to control music in such a way that it will serve us for good and in no way harm us. This is why the early doctors of the church used to complain that the people of their time were addicted to illicit and shameless songs, which they were right to call a mortal, world-corrupting poison of Satan’s.

Now in treating music I recognize two parts, to wit, the word, that is the subject and text, and the song, or melody. It is true, as St. Paul says, that all evil words will pervert good morals. But when melody goes with them, they will pierce the heart much more strongly and enter within. Just as wine is funneled into a barrel, so are venom and corruption distilled to the very depths of the heart by melody.

So what are we to do? We should have songs that are not only upright but holy, that will spur us to pray to God and praise Him, to meditate on His works so as to love Him, to fear Him, to honor Him, and glorify Him. For what St. Augustine said is true, that one can sing nothing worthy of God save what one has received from Him. Wherefore though we look far and wide we will find no better songs nor songs more suitable to that purpose than the Psalms of David, which the Holy Spirit made and imparted to him. Thus, singing them we may be sure that our words come from God just as if He were to sing in us for His own exaltation. Wherefore Chrysostom exhorts men, women, and children alike to get used to singing them, so as through this act of meditation to become as one with the choir of angels.

Then, too, we must keep in mind what St. Paul says, that devotional songs can be sung well only by the heart. Now the heart implies intelligence, which, says St. Augustine, is the difference between the singing of men and that of birds. For though a linnet, a nightingale, or a parrot sing ever so well, it will be without understanding. Now it is man’s gift to be able to sing and to know what it is he is singing. After intelligence, the heart and the emotions must follow, and this can happen only if we have the hymn engraved in our memory so that it will never cease.

And therefore the present book needs little recommendation from me, seeing that in and of itself it possesses its own value and sings its own praise. Only let the world have the good sense henceforth to leave off singing those songs—in part vain and frivolous, in part stupid and dull, in part foul and vile and in consequence evil and destructive—which it has availed itself of up to now, and to use these divine and heavenly canticles with good King David. As for the melody, it has seemed best to moderate it in the way we have done, so as to lend it the gravity and majesty that befits its subject, and as might even be suitable for singing in church, according to what has been said. 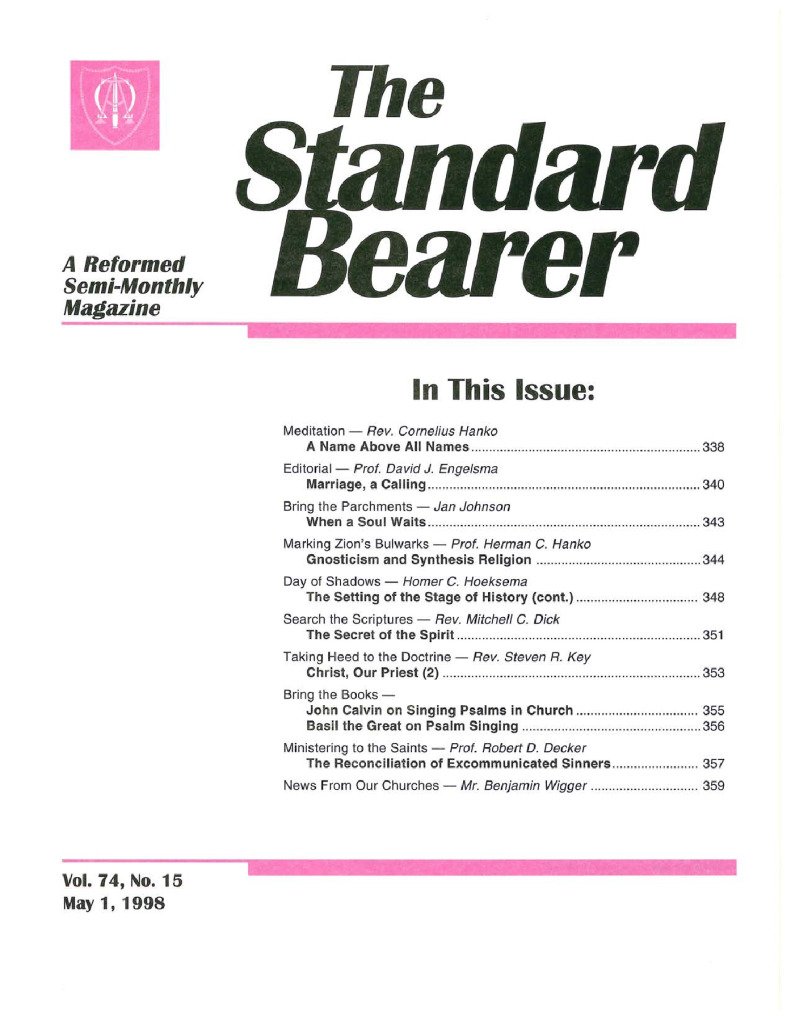