Vol 78 Issue 18 7/1/2002 By: Hanko, Herman, in Marking the Bulwarks of Zion, Johann Agricola and Antinomianism

While Johann Agricola occupied an important place in the Lutheran Reformation, and while he could have been of inestimable help to the cause of the truth of Jesus Christ when that truth was being rescued from the clammy hands of the bishop of Rome, he forfeited his right to occupy this noble place. He forfeited his right to occupy such a place because he became a proud man and turned his desires away from advancing the cause of the gospel to his own longing for a more prominent place in the work of the Reformation. He was jealous of Melanchthon, and his jealousy of Melanchthon spilled over into a jealousy of Luther.

If this were not so serious, it would be ludicrous. It is something like a pygmy aspiring to become a giant; or something like a man who cannot balance his own checkbook to aspire to the head of the mathematics department in MIT. Agricola had his gifts. Contentment with them and a humble effort to use them in God’s kingdom would have enshrined him in the company of those heroes of faith who restored to the church the great gospel of salvation by grace alone. Pride got in the way, and an ignoble heresy of his own invention destroyed his effectiveness.

The History of His Heresy

In 1526 the University of Wittenberg was looking for a full-time professor of theology. Agricola applied for the post. He was passed over in favor of Philip Melanchthon, the great theologian of the Lutheran Reformation. He never forgot this, and he took out his disappointment on Melanch-thon personally.

In 1527 Agricola publicly attacked Melanchthon on the question of the place of the law in the life of the Christian. He did this by driving a wedge between the law and the gospel. Luther was disturbed by this attack on Melanchthon, but also considered Agricola to be a man whose abilities could be put to good use in the cause of the Reformation. Luther, therefore, worked hard to mediate a truce between the views of Melanchthon (which views were also those of Luther) and the aberrations of Agricola. It seems as if Agricola backed down—something he was to do repeatedly in subsequent years when things got a bit too hot. Peace lasted for a while.

But against the wishes of his superior, Agricola left the Latin school in Eisleben and moved to Wittenberg. When Luther’s work took him to Smalcald in 1537, Agricola, with great boldness, moved into Luther’s position in the church and the university.

As a sort of parenthesis we may note that Luther’s trip to Smalcald was in the context of serious troubles in Germany. Germany was ruled by various princes who had effective authority in their own provinces, but who had no authority in other parts of Germany. There was no strong central government, although technically Germany was under the broad rule of Charles V, emperor of the Holy Roman Empire. Periodically the princes would come together in a “Diet” to decide matters of mutual interest and national policy. One of these Diets was the well-known Diet of Worms, where Luther made his historic and courageous stand. But with the Lutheran Reformation, Germany was divided between Protestant princes and Roman Catholic princes. Germany stood on the brink of civil war when Roman Catholic princes threatened to attack Protestant princes to force Roman Catholicism on Protestant provinces. The Protestant princes came together in Smalcald to form a Protestant union to resist Roman Catholic attacks. Out of this meeting came the famous Articles of Smalcald, in which the Protestant princes outlined what they believed to be the truth of the Word of God. Out of this meeting came also the name “Protestant,” which has identified to this day those who oppose Rome. In this historic meeting Luther played a prominent role.

But to get back to Agricola, not only did he simply take over Luther’s place in the church and university in Wittenberg, but he also began openly to attack Luther’s views. For this he was arrested upon Luther’s return, but he escaped. Then followed a series of retractions when Agricola really saw his position endangered, yet these retractions proved to be insincere at every turn of the way. Luther really never trusted Agricola again.

In a limited way Agricola continued to have influence. In 1541 he became court preacher of Joachim II of Brandenburg. He was appointed to a commission at the Diet of Augsburg to prepare an interim agreement between Protestants and Roman Catholics. And he continued to be a preacher of some note.

Agricola was a thorough antinomian. He gained a following within Lutheran circles, which supported him and developed his views. Both Agricola and his followers claimed to represent true Lutheranism. They claimed that Luther had departed from his own teachings and had taken a giant step back towards Rome. In fact Agricola was so bold as to insist that he was Paul correcting Peter in Antioch, with Luther of course being Peter.

What was it that Agricola taught? The controversy really centered in the question of the necessity of good works. Are good works necessary for the Christian? Agricola answered with a sharp No! Luther said, with equal or greater vehemence, Yes!

Agricola claimed that repentance, the consciousness of sin which saved, and the fear of God arose out of the gospel, not out of the law. Luther taught that it is by the law that the believer comes to the knowledge of sin that leads to repentance.

Jacob Schenk, an ardent follower of Agricola, carried his mentor’s views to their extreme. “All who preached the law were possessed of the devil,” he said. “Do what you will (that is, live as you please, HH), if you only believe you are saved.” “To the gallows with Moses.” Faith is perfectly capable of existing without works.

i. Repentance is to be taught not from the decalogue or any law of Moses, but from the suffering and death of the Son through the gospel. ii. For Christ says in the last chapter of Luke: “Thus it behooved Christ to die and in this manner to enter into his glory, that repentance and remission of sins might be preached in his name.” iii. And Christ, in John, says that the Spirit, not the law, convicts the world of sin. vii. Without anything whatever the Holy Spirit is given and men are justified: this thing [the law] is not necessary to be taught either for the beginning, the middle, or the end of justification. viii. But the Holy Spirit having been given of old is also given perpetually, and men are justified without the law through the gospel concerning Christ alone. xiii. Wherefore, for conserving purity of doctrine we must resist those who teach that the gospel is not to be preached except to those who have been crushed and made contrite through the law. xvi. The law only convicts of sin and that, too, without the Holy Spirit; therefore it convicts unto damnation. xvii. But there is need of a doctrine that not only with great efficacy condemns, but also at the same time saves: but that is the gospel, which teaches conjointly repentance and remission of sins.

While, as I said earlier, there are surely statements in Luther’s writing and teaching which, if wrested out of context, could be quoted in support of this blatantly antinomian position, nevertheless, Luther never taught any such thing. He steadfastly maintained the important place of good works in the life of the believer, even though justification is by faith alone without the works of the law. He insisted, and rightly so, that Agricola’s position led directly to a profane and godless life in which a man could live in every fornication and sin and yet go to heaven. “Let us sin that grace may abound” is the conclusion of antinomianism.

The controversy continued after the deaths of Luther and Agricola, and was not officially settled until the adoption of the Formula of Concord in 1576-’77. Article 5 of this confession defines the Lutheran position.

It is no wonder that our Heidelberg Catechism, written in Germany, enters into this question in some detail. It outlines the Reformed position in great detail and in an entirely biblical way. The law, our Catechism insists, is necessary for two reasons. By the law is the knowledge of our misery, because it brings us to the knowledge of our sin (Lord’s Day 2). And the law is the rule of gratitude, by the keeping of which we express our thankfulness to God for such a great salvation as He has given to us (Lord’s Days 32 & 33). Gratitude makes good works necessary, says the Catechism, not as the ground of our justification (Lord’s Day 24)—a doctrine which the Catechism condemns in almost violent language—but because thankful children are obedient children.

The law is indeed, as Luther said, inescapably attached to the gospel. In fact, Scripture makes clear that the law is gospel, for it has the power to convert the soul, to make wise the simple, to enlighten the eyes (Ps. 19:7, 8). David loved God’s law (Ps. 119:97) and ascribed to it many blessings of salvation, such as an understanding of God’s ways which came to the psalmist through God’s precepts (Ps. 119:104).

The law always requires obedience of all men on pain of death, but the law becomes gospel as the perfect law of liberty, or, as James calls it, the royal law, i.e., the law of the kingdom of heaven. As such it is the law which, though broken by man in his transgression, is fulfilled in the perfect obedience of Christ, who kept the law when He suffered the torments of hell. By His perfect obedience Christ fulfilled the law for His people, so that the law is written in their hearts as their rule of gratitude, and the ability to keep that law is given by grace.

This is the gospel which smashes all antinomianism and protects the great truth of justification by faith alone without the works of the law. 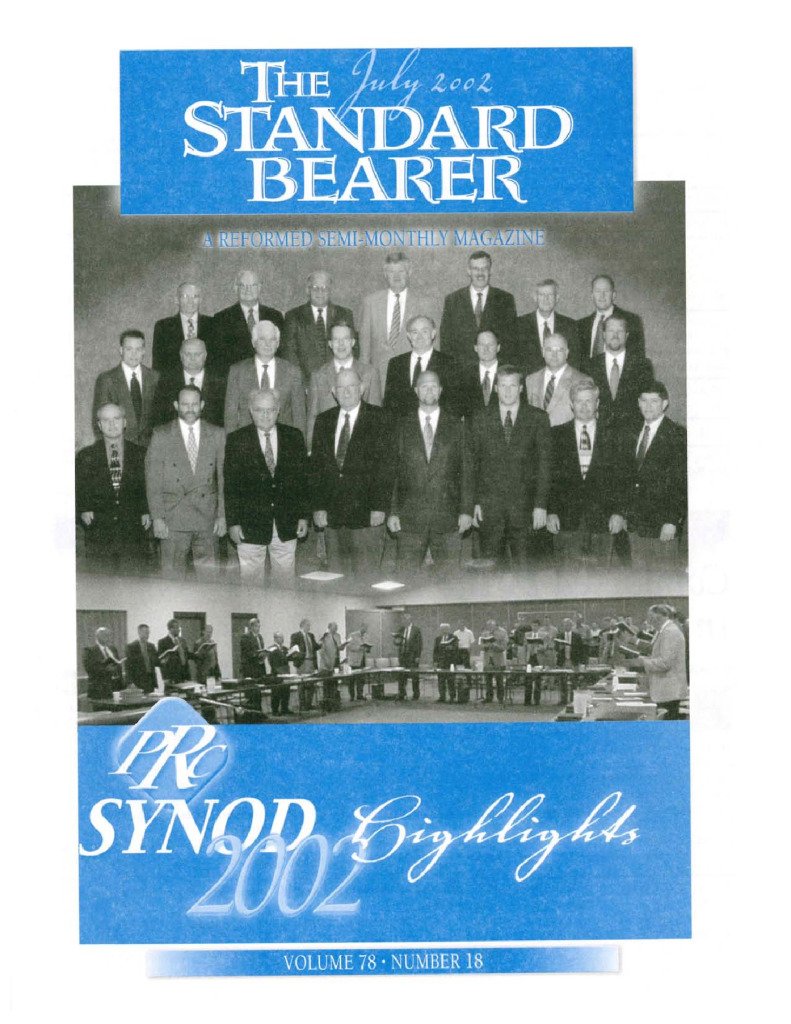