When God provides men of great ability for the church in times of crisis, He gives to these men a breadth of understanding of His Word which it is not always easy for others to comprehend fully. Great men are able to hold all the nuances of the truth of Scripture in a proper and biblical balance so that their theology remains consistently biblical. But some followers of these men, unable to see the scope of their leaders’ theology, latch on to one aspect of it and make only that one aspect the be-all and end-all of orthodoxy.

An example of this is to be found in the work of some who find common grace and the well-meant offer of the gospel in John Calvin. One must admit that there are passages in Calvin’s writings which would lead one to suspect that Calvin may have believed in these wrong doctrines. But one who understands the breadth of Calvin’s thought will understand soon enough that Calvin never intended by these passages what theologians of the nineteenth and twentieth centuries make of them.

It is easy also to find examples in more recent history. Some, claiming to be ardent followers of Herman Hoeksema in years gone by, but failing to grasp the breadth of his thinking, latched on to one aspect of the truth, carried it to extremes, and insisted that their narrow view of what Hoeksema taught is the full truth.

Presumably this happens with every great man of God whom God uses to bring the faith of the ages to fuller development. It happened to Luther even during his own lifetime.

Luther’s central doctrine was the wonderful truth of justification by faith alone without the works of the law. During the later years of Luther’s reformatory work, some latched on to Luther’s insistence that the works of the law had nothing whatsoever to do with the believer’s justification. But they carried it to ridiculous extremes and became what we call today antinomian. They turned their backs on the law altogether, cursed the law, and insisted that a justified man had nothing more to do with the law. They even went so far as to accuse Luther of abandoning his own theological position when Luther condemned them. They claimed to be true to the genius of the Lutheran position and charged Luther with going back to the error of Rome.

Luther never taught such a view, and he despised those who taught it. But Luther did, from time to time, make statementswhich, taken by themselves, could easily lead one to think that Luther threw the law out of the church window and refused to have anything to do with it. But when Luther made these statements he was speaking of the damnable error of Rome that such works of the law served in part as the basis for our justification. Luther could also preach and teach in most vigorous language the absolute necessity of the law and of the believer’s obligation to keep the law. But narrow men took hold of just one aspect of Luther’s thought and built a whole theological system out of it.

It is possible, of course, that those who perverted Luther’s thought (and those who pervert the thought of other great theologians in Christ’s church) do so not so much because they are unable to comprehend the breadth of their leader’s ideas, but out of deliberate intent to pervert a man’s thought. They have an axe to grind. They have a pet heresy to defend. They need the backing of a great man. They latch on to one aspect of his thought and inflate it to be the fulcrum of all theology. This is an evil greater than that of ignorance. But only God can judge the heart.

A Survey of Agricola’s life

Johann Agricola is to most people an unknown figure. He seems to have dropped off the stage on which the drama of the Reformation was taking place; or, if not that, he seems to be such a bit player in the drama that few notice him. Yet, he played an important role and caused Luther no end of grief.

He was born in Eisleben in Prussian Saxony on April 20, 1494 under the name Johann Schneider. Eisleben was also the birthplace of Luther, although Luther was born eleven years earlier. Their paths did not cross in this village, however, for Luther’s parents moved to Mansfeld when Luther was but six months old.

Agricola entered the University of Leipzig in the winter of 1509-1510 to study medicine. Somewhere he became acquainted with Luther’s thinking even before Luther nailed his theses on the chapel door of the church of Wittenberg. This must have been sometime during his studies at Leipzig, for in the winter of 1515-1516 he went to Wittenberg to study theology under Luther.

At any rate, after studying under Luther in Wittenberg, Agricola became thoroughly Lutheran in his thinking and joined an ardent band of men who were captivated by Luther’s thought. Agricola was held in highest esteem for his theological acumen and his loyalty to the cause of reformation. He was present when Luther nailed his 95 theses on the chapel door; he witnessed the Leipzig Disputation, where Luther, in debate with the powerful Roman Catholic apologist John Eck, committed himself wholly to the authority of sacred Scripture. He became Luther’s private secretary and formed a close friendship with Melanchthon. He was in the inner circle of Wittenberg’s reformers and contributed his own understanding to the movement as it gained momentum under God’s guidance and blessing and started to shake Europe to its foundations.

In August of 1525 Agricola was entrusted with the responsibility of the headship of a new Latin school in Eisleben, the city of his birth. The appointment demonstrated how much confidence the reformers had in him, and served as some measure of his ability. A list of his accomplishments is impressive. He wrote two catechetical books which were widely used. He gathered and edited three collections of German proverbs, giving explanations of them. This work became immensely popular and spread his fame throughout Germany. He translated Melanchthon’s commentaries from Latin into German. He became a preacher (although his ordination was always somewhat suspect) and was apparently one of the most powerful preachers of the Reformation, for he was appointed to preach the opening sermons at the Diets of Speyer in 1526 and 1528 in the presence of all the ruling princes and counts of Germany.

But Agricola developed one fatal flaw. Perhaps his success went to his head. He became proud of his own theological abilities and acquired a vanity which proved his downfall. In 1526 he applied for the position of theological professor in the University of Wittenberg. He did not receive the appointment, but Melanchthon, his close friend, was given this now very prestigious post. Agricola was jealous of Melanchthon and became bitterly antagonistic.

What the relationship is between Agricola’s pride and his subsequent error is known only to God. This we may be sure of: throughout the history of the church, as often as not, a heretic introduces false doctrine in the life of the church not so much because he does not understand the issues involved, but because he has become a proud man. Pride frequently lies at the bottom of a heretic’s doctrinal aberrations. Dorothy Sayers, a late twentieth-century writer, said that the underlying sin of Judas Iscariot was the sin of intellectual pride. If so, he was followed by a legion of others, outstanding men in the church, who betrayed their Lord by sacrificing His truth for their own thirty pieces of silver—the acclaim of men.

When Agricola began to teach his wrong views, he attacked not Luther first of all, but Melanchthon. This attack, though a defense of antinomianism, was made in a jealous rage against a friend who acquired the position Agricola coveted.

But this did not mean that Agricola did not have Luther also in his theological sights. He was, in his pride, determined, it seemed, to take Luther’s place. This was evident from the fact that Agricola left the headship of the Latin School in Eisleben—even though the count who ruled the province forbad him to leave. He went to Wittenberg and, in 1537, simply took over Luther’s work in the church and university when Luther went to Smalcald on important Reformation business.

But this growing opposition is the subject of our next article, and we must wait till then to trace Agricola’s career further. 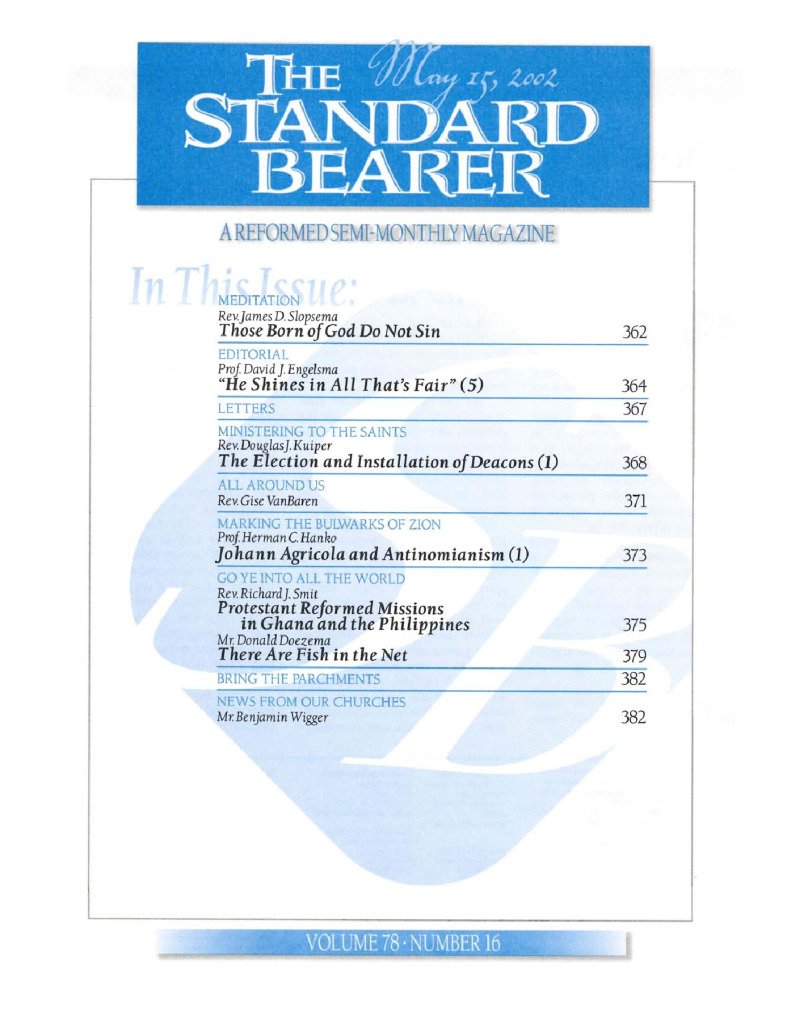