“My sheep hear my voice, and I know them, and they follow me:

And I give unto them eternal life; and they shall never perish, neither shall any man pluck them out of my hand.

My Father, which gave them me, is greater than all; and no man is able to pluck them out of my Father’s hand. I and my Father are one. “

Directly these words of Jesus were spoken by the Lord to the Jews who had gathered about Him during the feast of the dedication as Jesus walked on Solomon’s porch at the temple in Jerusalem.

Interesting it is to note that in substance the Lord had spoken the same truth on an earlier occasion, as we observe in the preceding context. Then it seemed that the Jews had been greatly divided in their opinion of Him. But now, two months later, Jesus is talking to them on the same subject. Only this time the conversation is occasioned by a direct question as to Jesus’ true identity. They say: “How long dost thoumake us to doubt? If thou be the Christ, tell us plainly.” Jesus answered and said unto them: “I told you before, but you did not believe. But ye believe not, because ye are not of my sheep.”

On this dismal background Jesus paints as it were the picture of the Good Shepherd and His sheep. Particularly concerning the latter He speaks in our text.

Blessed is he who is incorporated in the threefold description Jesus gives here of His sheep!

First of all they are the called ones!

“My sheep hear my voice!”

The voice of the Shepherd calls them!

He is the Good Shepherd!

And that means, in the first place, that He is the divinely appointed Shepherd. God has set Him, Who is His only begotten. Son, to be the Shepherd of His people. It is this that the psalmist David, also a shepherd, recognized when he declared: “The Lord is my Shepherd, I shall not want.” And of Whom the prophet Isaiah wrote: “He shall feed his flock like a shepherd: he shall gather the lambs with his arm, and carry them in his bosom, and shall gently lead those that are with young.”

That He is the Good Shepherd does not reflect so much on His ethical perfection and virtues, though He is, indeed, the sinless and perfect Son of God in the flesh; but the term evidently reflects on the truth that the fullest realization of the idea of the shepherd is to be found in Him. All the qualities of the real shepherd are found in Him. At the same time, He is the antitype of all shepherds that preceded Him, while they all were simply imperfect figures of Him that was to come.

The Good Shepherd calls, and the sheep hear His voice!

He calls by His Word and Spirit!

In another Scripture (John 1:1), that Good Shepherd is called the very Word of God. God calls, and He is pleased to do this through the voice of the Good Shepherd. That voice of the Good Shepherd was heard in all the prophets that appeared before His incarnation. That voice was heard of Him when He appeared in the flesh and walked among men. At the very moment He uttered the words of our text to contemporary Jews, His sheep heard His voice and His call. And they still hear it in the faithful preaching of the gospel. Fact of the matter is, that the highest point of all true preaching is for the sheep to hear the voice of the Good Shepherd speaking to them. And that they do when that Word is graciously applied to them by the Holy Spirit, as the Spirit of Christ.

That the sheep are called is the result of the efficacious working of grace in them, whereby they not only hear with all their senses the saving call of the Good Shepherd, but His call reaches into their hearts, into the very center of their spiritual being. So they hear His voice, and that very voice works in them in such a way that they respond.

O, indeed, there were many who heard His voice; even the Jews to whom He was now speaking. But they responded not, except antithetically. They did not believe, because they were not of His sheep; but they heard His voice. That very voice evoked in them all the antipathy, hatred, which they were presently to heap on Him when they would bring Him to His cross. Always the voice of Jesus has this twofold effect: it either arouses in the hearers the murderous cry: Crucify Him, Crucify Him! or, it gently persuades the true sheep to seek His face, and to follow Him whithersoever He will lead them.

My sheep hear My voice, and I know them!

Implicit in these words is the truth, first of all, that the sheep are the Good Shepherd’s peculiar possession. They were given unto Him by the Father from everlasting. He makes them His own through the ransom price of His own precious blood. And consequently He knows them. He knows them all, and each one, by name. Not you understand, by the name given them by their parents; but by their spiritual names: pure in heart; poor in spirit, the merciful, and those who are hungry and thirsty after righteousness, etc.

By these names He calls them, and these hear His voice!

The Lord’s description, therefore, in the second place, describes His sheep as obedient sheep!

To hear, in this instance, has more in it than merely to understand intelligently what has fallen sensibly upon the ear drum, so that it is known what is spoken; but implicit in this hearing is also response, obedience.

The sheep hear His voice, but the voice of strangers they will not hear. This was what was so apparent now as the Lord spoke to His adversaries. They had in their leaders set themselves forth as the shepherds of Israel. Ruthlessly they had imposed upon the sheep of Christ commandments too grievous to be borne, but which were intended to make the sheep follow them. Vainly they called to these sheep to follow them. But these blind leaders would only lead them astray, and by their endeavors seek to blot out the very image of the true and Good Shepherd. But the sheep would not follow them! And this truth obtains still today. Many there are who would beckon Christ’s sheep with gracious offers, and a watered down gospel in which the sheep can find no semblance of the Christ of the Scriptures. Indeed, these false shepherds have a following, and in the time to come this following will increase, for there will indeed be a great falling away. Scripture makes very plain that many shall follow their pernicious doctrines and ways, but this is only the falling away of unbelievers,—those who have lived in close proximity to the church and her preaching, those who have tasted of the heavenly gift, been made partakers of the Holy Ghost, and have tasted of the good word of God, and the powers of the world to come. These shall fall away, that is, follow after the doctrine of the false leaders. But not so the true sheep of Christ!

Only the voice of Jesus they will hear! Not of themselves, you understand, but because of the efficaciousness of that voice and that call. That voice they love. To that voice they will respond, and obey. When He calls them, they will come!

That they follow Him, is due therefore, first of all, to the drawing power of their divine Shepherd. But, in the second place, to the very nature of His Word and Spirit that works in them. Subjectively they must respond, join themselves to Him, cleave unto Him, and become His disciples. With confident trust they implicitly rely on Him, and follow Him whithersoever He leads them. They are not afraid of Him with the fear of fright, but they fear Him with the knowledge of love.

And, in the third place, the Lord describes His sheep as those who are perfectly safe!

Positively, the Lord says: “And I give unto them eternal life!”

And, according to Jesus in another place in John’s gospel (John 17:3), “This is eternal life, that they may know thee the only true God, and Jesus Christ, whom thou has sent.” In other words, eternal life consists in the perfect, spiritual, intimate knowledge of God Who is Jesus Christ, Whom He has sent. Accordingly, this eternal life is the constant adaptation of the life of the eternal God which is in them. As the fish lives, when it constantly adapts itself to the water; and as the tree lives when it constantly adapts itself to the soil; so the sheep of Christ live as they are constantly adapted unto Him, the God of their salvation.

This eternal life the sheep experience already now. It was merited for them by the Good Shepherd. It is wrought in them by His Spirit and grace. Their hearts are filled with it in regeneration, resurrection life. They taste the peace of it in justification. They walk in the hope of it in way of sanctification. And presently in body and soul, with their whole being, they shall experience it when death and the grave have prepared them for everlasting glory.

Negatively, the Lord says: “And they shall never perish, neither shall any man pluck them out of my hand.”

O, indeed, like natural sheep, they may wander sometimes far from the fold, they may go astray, and even fall when their eyes are not constantly stayed on their Shepherd. And the Shepherd may allow His sheep, which for a time imagine they are independent, self-sufficient, rebellious, and sinful, to go astray to their hurt. But they shall never perish! And no one shall be able to pluck them out of His hand!

The reason? “My Father, which gave them me, is greater than all; and no one is able to pluck them out of my Father’s hand. I and the Father are one.”

What is not of God and of Christ, perishes!

What belongs to Christ, Who is the God of our salvation, is eternally blessed!

What solid comfort in these words of the Shepherd for all the sheep of Christ!

They are eternally safe!

With the hymn writer I will sing, “When at last by His grace, I shall look on His face, that will be glory for me!”

Will you sing it with me? 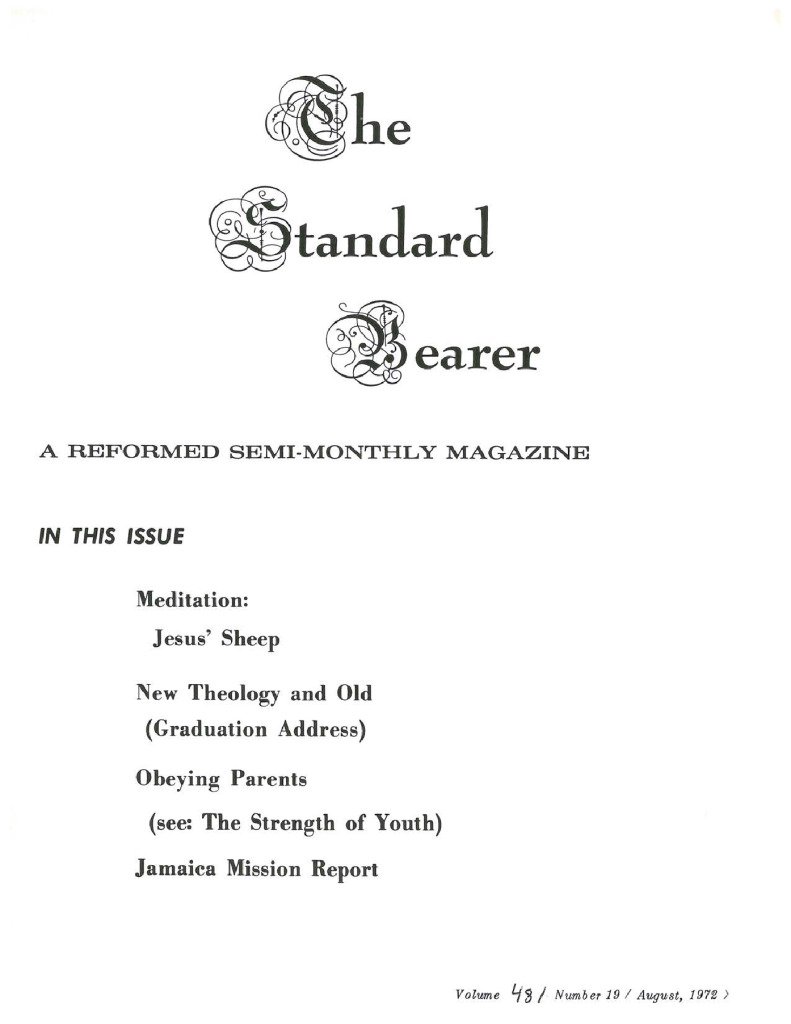