Robert C. Harbach is a minister emeritus in the Protestant Reformed Churches.

In the Gospel according to John 18:8-9, we read, “Jesus answered, ‘I have told you that I am (He). If, therefore, ye seek Me, let these go their way;’ that the saying might be fulfilled, which He spake, ‘Of them which Thou gavest Me, have I lost none.'” This 18th chapter begins a new section in John’s Gospel. Chapter 1 is introductory in character; 2-12 record Christ’s ministry; 13 shows our only high priest approaching the laver where he washes the disciples’ feet; 14-16 show our high priest passing on to the holy place; in 17 He spiritually enters the holy place; in 18 He moves on toward the mercy-seat, in the holy of holies; in 19 He enters in through the vail (His flesh), and sprinkles the blood on the mercy-seat; 20-21 record the victory of the resurrection and the purpose of the book. Now let us look at the text from the point of view of Jesus Protecting His Own, considering, I. Who (the disciples), .II. How (by a word), and III. Why (so that . . .).

“When Jesus had spoken these words . . .” His ministry as our Chief Prophet and Teacher extends from chapters 1-12. At chapter 13 He enters upon His priestly work, so that “these words” are those of chapters 13-17. “Then He went forth with His disciples over the (winter-) brook Cedron, where was a garden”—Gethsemane, although John does not mention the name. But John is the only one who does record this passage of verses 4-9! Into the garden Jesus entered with His disciples. We learn at this point that Judas has been excluded from the number of the disciples. Further, the Lord’s appearing here was to show (1) that, not Judas, but He was in charge of all the following circumstances, and (2) that He would thus provide an easy escape for His disciples, while (3) He identifies Himself to the Judas-mob.

Now Judas, too, who was betraying Him, knew the place. This knowledge of Judas was part of his education in the school of Christ. What it earned him was the highest degree in hell! In contrast to what Judas knew, “Jesus . . . knowing all things coming upon Him, went forth” in perfect control of all those things. He had ordained that His chosen place for prayer should be the place of His agony and betrayal. There He would meet the enemy at the beginning of His last earthly battle on His own ground.

“Judas then, having received a band of men and officers from the chief priests and Pharisees, cometh thither with lanterns and torches and weapons” (John 18:3). This was a rather large force of men, Roman soldiers armed (the Jews were not permitted to have arms), followed by the chief priests, captains of the temple, and the elders (Luke 22:52). There theyapproached with lanterns, torches, clubs and weapons; but the text says, “Judas comes” with all that! He was at the head of this sinister crew.

“Jesus, therefore, knowing all things coming upon Him” (John 18:4.) . . . “knowing that His hour was come” (John 13:1), and “knowing that the Father had given all things into His hands” (John 13:3), then took the initiative, and went forth to meet the enemy. For they His enemies, all their might and movements, were in His hands. Thus He “went out.” (Compare” this with “into which He went,” John 13:1). This positioned Him just outside the garden gate, where Judas could make his signal of the betrayal kiss. The matter is taken out of Judas’ hands; it is all in Jesus’ control. For not Judas, but Jesus identifies Himself to His captors.

At every step taking the initiative, Jesus was the first to speak: “Whom seek ye?” He did not wait to be challenged. Why did He begin His own advance upon them with this question? The reason is given in thetherefore. “Jesus therefore knowing all things coming upon Him, went out and said to them, ‘Whom seek ye?'” He knew the evil intent of this mob. He knew the purpose of all these things happening to Him: in this way He would go to the Cross. He knew His own purpose, the ultimate realization of the joy that was set before Him in gaining the victory of sitting at the right hand of the throne of’ God. To this end He was willing to despise the shame and endure the cross. This made their lanterns, torches, and weapons ridiculous!

They answered Him, ‘Jesus, the Nazarene.’ Jesus saith unto them, ‘I am He.’ The reply was from the head of the Roman force, leading the club-carrying crowd of Jews. They all saw Him. Jesus had put Himself forward in view of all. Their torches and lanterns clearly revealed His well known face and figure. Lenski says that “two things help to explain the form” (of their reply)—”the unexpected challenge in the question of Jesus and the ringing note of authority demanding an answer.”

And Judas, too, who was betraying Him, was standing with them. (He is no more numbered with the disciples.) John does not mention the betrayal sign of the Judas-kiss. His account is concerned with other, heretofore unsupplied details. But can we determine where in John’s account this dastardly deed occurred? By comparing Luke’s account, we may say it took place between what we read of in John 18:9, 10; Judas, at last, showed plainly what side he was on. There the wretched turncoat was betraying Jesus, also by standing, continuing to stand, with the enemy. Judas showed himself “anti-“. He was not regarded as an “anti-Semite” (although. he deserves having the label applied to him, for he dishonored “the tents of Shem,” where God was pleased to dwell), but he was a “semiteanti.” He was anti-Christ. He was “standing with them,” with all those many antichrists. ”

As soon, then, as He had said unto them, ‘I am (He),’ they (including Judas) went backward (stumbledaway from Him), and (then) fell to the ground.” It was His repeated reply, “I am He” which caused them to stagger backward away from Him and then to fall to the ground. Two facts are recorded: they went backward and they fell down. They actually shrank and retreated from Him. This is what John says happened to that mob of several hundred men—trained Roman soldiers facing Jesus, followed by the non-military crowd of Jews. “I am” throws them all back and down onto the ground. Here we see two miracles at the Garden of Gethsemane: (1) this falling to the ground of Gentile soldiers and temple Jews at the powerful presence and voice of the Lord. His power was adjusted to jerk them backward, then to throw them all down to the ground. Nor were they able to rise again until He addressed them again. He had the power to split open the earth under their feet to swallow them down into the pit, as God did with Korah and his co-conspirators. So Jesus showed that He was in control, and that they could take Him only if He voluntarily gave Himself into their hands. (2) Jesus protected His disciples from all harm. The high priest’s servant was hurt. But not a scratch came to the eleven, although they were surrounded by a huge posse, a small army. Jesus protected and preserved them. Peter especially was endangered, for he was the one who had struck with the sword. But the danger was removed in the restoring and healing of Malchus, and that by only a mere touch of Jesus’ hand. Luke, the beloved physician, alone records this miracle. In every age, believers are small in number compared with the wicked world. But God’s promise is, “Fear not, little flock, for it is your Father’s good pleasure to give you the kingdom” (Luke 12:32). Jesus is always in control. Even the stormy wind and the raging sea obey Him. For on one occasion He had appeared walking on the sea to still the terrified hearts of His disciples with, “I am! Fear not!” (John 6:20, Greek). But here His “I am” had the opposite effect. Christ’s word (and He is the Word!) always has a two-fold effect. The same word is to some a “savor of life unto life,” while to others it is “a savor of death unto death.” Either way, God’s Word never returns unto Him void, but always accomplishes that which He doth please. It is also remarkable that to His elect His divine “I am” is accompanied by, “Don’t be afraid!”, a word of comfort that with respect to the reprobate is lacking. For their name is Magor-missabib, “Fear on every side” (Jer. 20:3). Divine judgment pursues them to the Day of Judgment when they will not be able to plead ignorance of the glory and majesty of His person, nor claim that they never had witnessed His mighty power, nor had opportunity to surrender to Him.

“As soon as He had said unto them; I am, they went backward, and fell to the ground.” In the Psalms, and so in our indispensable Psalter, we hear the Messiah (Ps. 2:2), the Son (Ps. 2:12), singing many of the psalms of praise to God. Psalter No. 71, stanza 2, is a messianic prophecy fulfilled then at the moment of John 18:6. Picture the Messiah singing,

To make My life their prey,

They stumbled in their shame

And fell in sore dismay;

Tho’ hosts make war on ev’ry side,

Still fearless I in God confide.

Very likely Psalm 27 was in Jesus’ mind on His way to, and later, out from the garden. The above stanza was His song Godward. Psalm 35:4 applies to this Judas-led mob manward. “Let them be confounded and put to shame that seek after My soul; let them be turned back and brought to confusion that devise My hurt.” Psalm 40 is certainly messianic (Ps. 40:7, 8), and Ps. 40:14 was fulfilled there at the garden gate. “Let them be ashamed and confounded together that seek after My soul to destroy it; let them be driven backward and put to shame that wish Me evil.” God always watches over His Word to perform it! 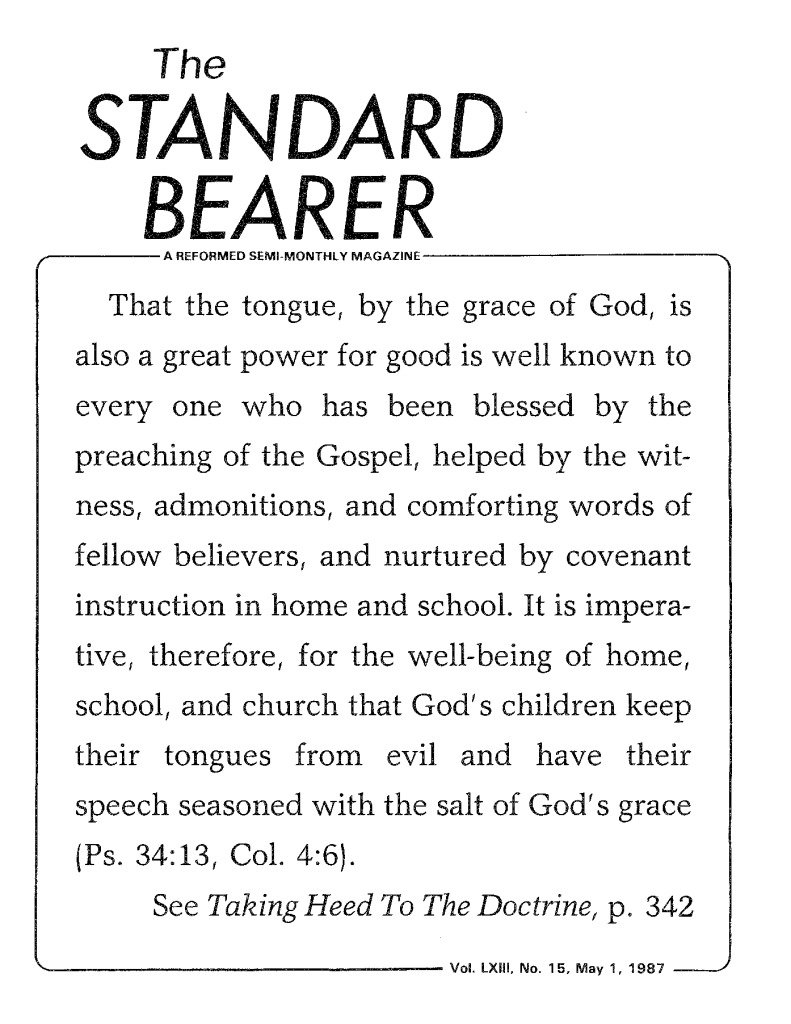