Jesus Mocked at the Cross

Likewise also the chief priests mocking said among themselves with the scribes, He saved others; himself he cannot save.

Let Christ the King of Israel descend now from the cross, that we may see and believe. Mark 15:31-32

At 9:00 a.m. on the day of the Passover, Jesus was crucified outside the city of Jerusalem with two malefactors.

There had been many events that had led up to this. Jesus had been arrested the night before by a band of the temple guard. He had endured a mock trial before the ruling body of the Jews, the Sanhedrin, which condemned Him to death on the charge of blasphemy: He said He is the Son of God. At the crack of dawn Jesus had been brought to the Roman governor, Pontius Pilate. The Jewish leaders wanted Pilate to condemn Him and crucify Him on the basis of His claim to be the King of the Jews. This made Him a threat to the empire. When Pilate hesitated, the leaders manipulated the people to demand Jesus’ crucifixion.

And so it was that Jesus was crucified on the day of the Passover. Out of spite Pilate had placed a placard over Jesus’ head, THE KING OF THEJEWS.

Our attention is especially on the taunting of the chief priests and scribes. How evil and devilish these taunts were. They charged Jesus with being powerless to save. How wrong they were. As we consider their taunts, we will see just how powerful Jesus is to save.

All the mockery that was hurled at Jesus on the day of His crucifixion was exceedingly evil. But especially that of the chief priests and scribes!

The Scribes were the teachers of the law. They stud­ied, interpreted, and taught the law both in the temple and in the synagogue. They were mostly Pharisees.

Matthew, in his account (27:41), makes mention of elders that mocked Jesus, along with the chief priests and scribes. Each district in Israel was ruled by an el­der. The more prominent elders, along with the chief priests and scribes, formed the Sanhedrin, the ruling body of Israel. It was this Sanhedrin that had arrested Jesus, condemned Him, and then maneuvered Pilate to crucify Jesus. And now members of the Sanhedrin mocked Jesus.

Listen in on their mockery.

He saved others; Himself He cannot save.

Oh, how many miracles had Jesus performed to save others from sickness and a life of mis­ery? But does He have the power to save Himself from death by crucifixion?

Let Christ the King of Israel descend now from the cross, that we may see and believe.

It is interesting that they brought up the matter of Jesus being the Christ, the king of Israel. Earlier that day they had condemned Him for His claim to be the Christ. This was blasphemy, making Him equal with God. Then they brought Jesus to Pilate with the charge that He claimed to be a king. That threatened the rule of Caesar. Jesus aspired to be the king of Is­rael. There was also the superscription on Jesus’ cross proclaiming Him to be the King of the Jews. Now the leaders mockingly suggest that if Jesus is the Christ, the king of Israel, He could demonstrate that by saving Himself, by descending from the cross. If only Jesus would do that, they would see and believe.

From a certain point of view Jesus did have the power to come down from the cross. Jesus had demonstrated that sufficiently throughout His ministry. Repeatedly Jesus had cast out demons, thereby demonstrating a power greater than Satan himself. When the temple guard came to arrest Him, Jesus made them fall back as dead men. A few nails and Roman soldiers certainly could not have kept Jesus on the cross, had He a mind to come down. How blind could the leaders be?

Had Jesus been the kind of king that the people had envisioned, He would have come down from the cross. They envisioned Him to be an earthly king with an earthly kingdom and power. What a time to show His power and win back the support of the people!

Yet, from another point of view, Jesus did not have the power to come down from the cross.

Contrary to the insinuation of the chief priests and scribes, Jesus is the Christ, the King of Israel. He had been sent into the world to establish the king­dom of God and rule it as king. This kingdom is not earthly and physical but heavenly and spiritual. It consists in the gracious rule of Christ in the hearts of God’s elect people. It is a rule that transforms them into a great spiritual nation that gladly bows the knee to Him and serves Him in love. It is a kingdom that knows no national boundaries but is found among the nations. It is an everlasting kingdom that begins shortly after Jesus’ departure from the world and will be perfected in the new creation.

This kingdom required that Jesus stay on the cross.

For, you see, this kingdom is possible only through the atonement of sin. So long as God’s elect stand in the guilt of their sin before God, they are bound to the de­pravity that has taken hold of mankind generally. Their life would be one of rebellion and defiance against God, not one of willing submission to Jesus as their King. Only when the guilt of their sin is removed through proper payment can the elect of God be transformed into willing and obedient servants of God’s King. This payment of sin Christ was now making on the cross. God was pouring out upon Him the full fury of His wrath as the proper punishment of sin.

From this point of view, it was not possible for Jesus to come down from the cross and save Himself. He is the Servant of the Lord, sent down from heaven as the Mediator of the church. He is the perfect Servant, who because of the perfection of His own being, can only do what the Lord has given Him to do. This bound Him to the cross, willingly and lovingly.

The chief priests and scribes indicated that, were Jesus to come down from the cross, they would see and believe. By this they meant that they would take notice of this great feat and then would believe that He is the Christ, the king of Israel.

That, of course, was folly. After all the miracles Jesus performed, which clearly testified that He is the Christ, these leaders refused to believe.

That is the nature of unbelief. It blinds a person so that he foolishly denies obvious reality.

But what of you?

You have seen the Lord Jesus Christ suffering on the cross, not in weakness but in power, to endure the full penalty of sin for His people. No, you have not seen it with your own eyes. But you have seen it on the pages of Holy Writ. And its testimony is true.

But with your own eyes you have seen the kingdom that Christ has established on the basis of the perfect sacrifice of the cross. The great spiritual nation of the church is found among all nations. They are identified by their joyful service of Jesus Christ as their King. What a glorious witness their obedience is to the cross.

Believe that Jesus is the Christ, the King of Israel.

Believe on Him and His work on the cross so that you find a place in His kingdom.

Believe on Him so that you joyfully serve Him as your King.

Believe on Him to the salvation of your soul! 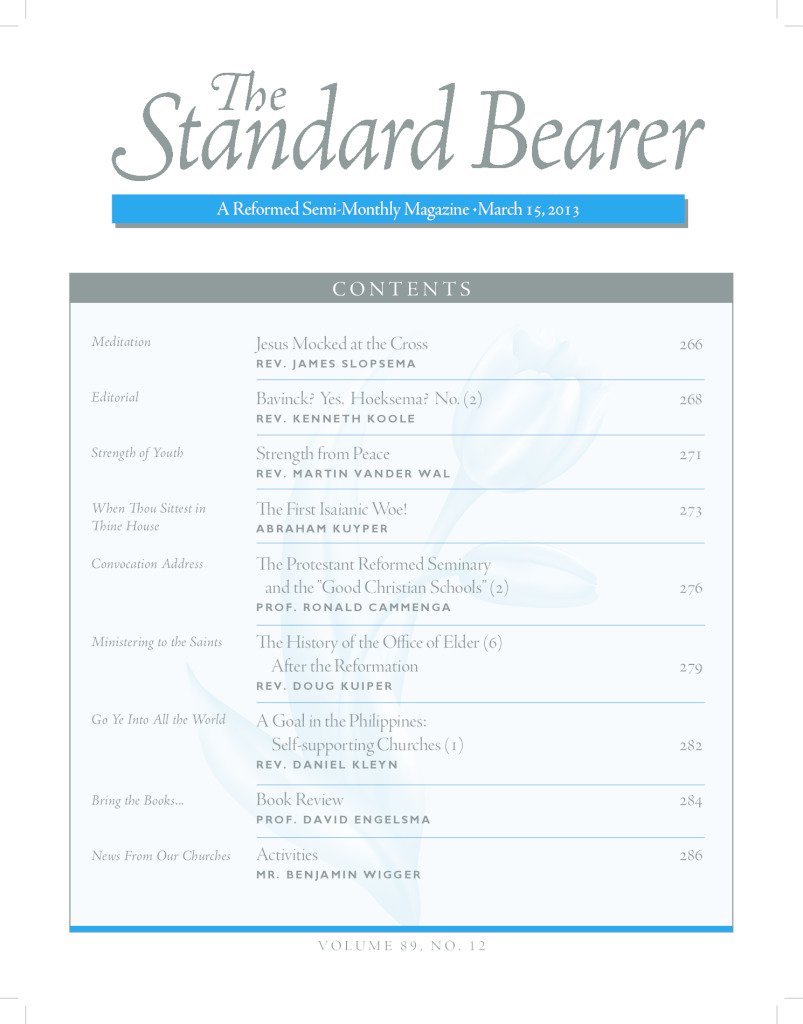