Jesus Is Head over All to His Body

Jesus Is Head over All to His Body

“And hath put all things under his feet, and gave him to be the head over all things to the church, which is his body, the fulness of him that filleth all in all.” Ephesians 1:22, 23

Our text arises out of Paul’s prayer for the Christians at Ephesus. Paul always assured those to whom he wrote that he was praying for them. This is what it means to be a pastor! And this is a wonderful expression of the communion of saints!

Paul told the Ephesian Christians that he was asking God to give them the spirit of wisdom and revelation so they might better understand what is the hope of those whom God calls, what is the riches of the glory of the hoped-for inheritance promised them, and what is the exceeding greatness of God’s power that is working in them to bring them to that inheritance (vv. 16-19). Paul gave a reassuring example of the exceeding greatness of God’s power when he described the power of God that exalted Jesus, first out of death and then to the position of sitting at God’s right hand, which itself is the position of greatest authority and power (vv. 20, 21).

This text declares that Jesus has two exalted positions of greatest authority and power. One is over all the universe, and the other is over the church.

Jesus is Lord of all! God exalted Him to the supreme position of having all things under Him. He assured His disciples of this very fact when He gave them the great commission at His ascension: “All power is given unto me in heaven and in earth” (Matt. 28:18). Consider three other passages that detail Jesus’ position of greatest authority and power. “Wherefore God also hath highly exalted him, and given him a name which is above every name: that at the name of Jesus every knee should bow, of things in heaven, and things in earth, and things under the earth” (Phil. 2:9, 10). At God’s right hand “angels and authorities and powers [are] made subject unto him” (I Pet. 3:22). Everything in the entire universe was “created by him, and for him” (Col. 1:16, 17).

In addition to being Lord of all, Jesus is also Lord of the church. This relationship is described in the text as His being the Head of “the church, which is his body.” There are two implications that we draw from this expression.

The use of this figure of speech teaches us that the relationship between Jesus and the church is the closest possible relationship. Together they are a spiritual organism; they have the same life. It is Christ’s Spirit that gives the life of the Head to each member of the body. Jesus is the Head in the sense that He is the source and center of the church’s life. Further, as the Head Jesus loves and cares for every member of the church, even as the head controls and cares for its body. Each member of Jesus’ body is dear to Him. He is always caring for and protecting every member of His body.

The second implication from this figure is that Jesus is the legal Head of the church. He is her King, ruling over her and governing her throughout history. He protects her from the devil and from all the powers of this present evil world, both of which are striving mightily to destroy her. Jesus’ power assures us that the gates of hell cannot prevail against His church (Matt. 16:18). At the same time, Jesus rules His church by His grace, making the members ready and willing to serve Him.

Jesus Fills and Is Filled

Our text declares that Jesus fills “all in all.” Jesus fills everything in the sense that He gives purpose and meaning to everything. He is first before all things and for Him all things were created (Col. 1:16, 17). “In the dispensation of the fulness of times” God is gathering “together in one all things in Christ, both which are in heaven, and which are on earth; even in him” (Eph. 1:10). This means that everything takes place by Him, and the purpose and meaning of all things is that they take place for Him. Everything in the universe is dependent on Jesus for the supply of its every need. Also everything and every event in the history of the world, from the smallest to the greatest, are made to serve Him and His cause. His virtue of sovereign control of all things radiates perfect and beautiful glory in all things!

That the time of Jesus’ birth is identified as “the fulness of times” shows that all of time centers on Jesus’ birth and life. He fills time. He is the center of the world, filling all in all as an on-going activity. The operation of filling all things is not a work of a single moment, but Jesus’ constant activity as Lord of all. Just as the sun keeps filling the earth with light, so Jesus Christ is continually filling all in all.

While Jesus’ glory fills everything in the world, His focus is on the church. She is dearest of all to Him. Therefore, we may say that Jesus rules and governs everything in the interest of Himself and His church. He rules over all “to the church.” God gave Jesus to the church as her Head, and He gave the church to Him as His body. He and His body cannot be separated. For this reason, all things exist and all things take place not only for Jesus’ glory and enjoyment, but for the redemption of the church.

Jesus fills the whole church and everyone in the church, from the least to the greatest member. He fills each one according to his/her capacity. The good present in each member of the church is, by the grace of God, the good of the Head. Altogether, all the attributes and graces of the Lord Jesus are distributed and displayed in the church so that the full glory of Jesus is seen in the church as a whole.

While the full perfection of Christ’s filling of the church will be seen clearly in heaven, it is true already now, for Jesus dwells in each member by His Spirit and grace. He fills each member with the light of the knowledge of Him and of spiritual things. This is in part what is meant by the expression: “blessed us with all spiritual blessings in heavenly places in Christ” (1:3). The tense of the verbs used in 2:5, 6 shows that it is already true that the members of Jesus’ body not only have been made alive together with Him, but also have been raised up together and made to sit together in the heavenlies in Christ Jesus.

The privilege and the honor of being in Christ is greater than any other privilege and honor in this world. What is true of Christ is true of the church and of each elect. As we were in Adam, so now we are in Christ. We have been crucified with Him. And we were risen with Him. So now, in Him, we are dead to sin and alive unto God (Rom. 6:11).

Abide in Christ. He abides in you (John 15:4). Live the life that is yours in Him. Exercise the power of the life of Christ that is in you. Use your spiritual muscles to mortify the members of your body that are instruments of sin. Do all you can with all your spiritual might. 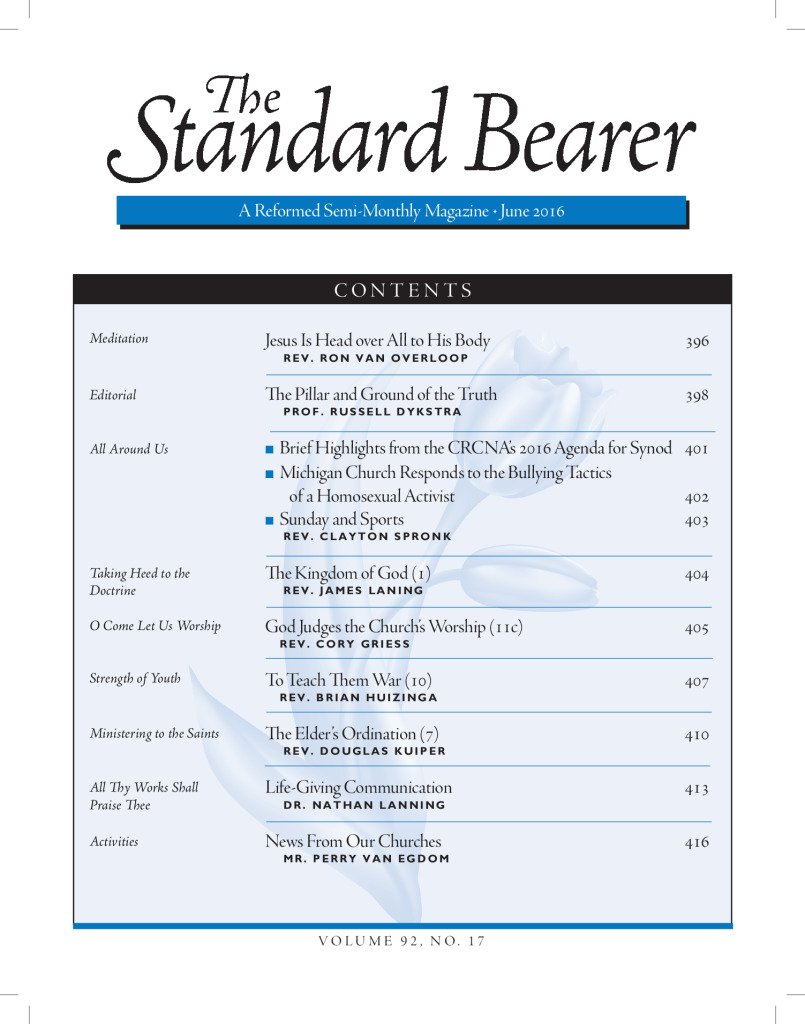