Robert C. Harbach is a minister emeritus in the Protestant Reformed Churches.

At the institution of the Lord’s Supper, Jesus had spoken these words, “For this is My blood of the new testament which is shed for many, for the remission of sins” (Matt. 26:28). He could speak of His blood as already shed, for He is the foreordained “Lamb slain before the foundation of the world.” John the Baptist did too, introducing Jesus not only prospectively but actually taking (bearing) away the sin of the world (John 1:29).

How do we speak of the blood of Christ? In the Modernist churches it is spoken of as little as possible. In our churches, and we say it humbly, you hear prayers exalting Christ crucified. Those same prayers express our earnest desire to walk even as He walked, and also express the church’s longing for the coming of the Lord. In the preaching you hear but one theme—Jesus Christ and Him crucified. So we preach, though this be to the Jews a stumbling block, and to the heathen foolishness; for to those being saved and added to the church daily, it is the wisdom and power of God!

Its Vital Importance. The words “My blood” have much more meaning than merely to signify Christ’s death. Death may occur without any blood being shed. There are modern New Testaments which change the familiar reading, “in whom we have redemption through His blood” (Eph. 1:7) to, “For by the death of Christ we are set free” (cp. Today’s English Version). This is a false and perverted translation, especially when the words “the blood” are found to be omitted some sixteen times. The word death is used instead. But although Jesus gave Himself up to death, even the death of the cross, He died by the shedding of Hisblood. Therefore, in our “Form for the Administration of the Lord’s Supper” (p. 60) we retain the words, “I have given My body to the death of the cross, and shed Myblood for you . . . .”

Jesus commanded His remembrance in observance of the Lord’s Supper: “This do ye in remembrance of Me.” Then why do some Christians neglect the sacrament (the means of grace)? Why is it that some in the church never have partaken of the Lord’s Supper, nor prepare themselves to do so? Does ourfaith respond to this command of Christ’s personally and individually? It cannot be complied with by proxy, nor by an alternate in one’s absence from the Lord’s Table, nor by a substitute deputized to take one’s place. Each believer has personal contact with the blood of Jesus, and so must come personally to the Table of the Lord. Each believer must be able to say at His Table, “He loved me and gave Himself for me.” We are commanded in “this do ye” and “drink ye,” not to a funeral, but to a festival; not to a fast, but to a feast, a thanksgiving feast. Why then would any saint keep from the Lord’s Table as though its spread was distasteful? Is not the Bridegroom’s dying love to us better than wine? (Song 1:2).

Its Covenant Connection. “This is My blood of the new testament,” or new covenant. God in His own being, in the three persons of the trinity, lives a covenant life. These three persons are three sovereign friends of one another. The triune God brings His people into covenant relation with Himself, making Himself their Sovereign Friend and them His friend-servants. For the covenant relation is a relation of friendship. The covenant itself is unilateral, one-sided, since God establishes His own covenant with His people, making them to be of the party of God. The covenant was neither initiated nor maintained by mutual agreement between God and man. We are of God’s party in the covenant, and our part in it is to live a new and holy life of thankfulness. The covenant bears the seal of the blood of the atonement. Holy and divine Scripture calls that blood the blood of God (Acts 20:28). Scripture also bears out the fact that the covenant has its origin, ground, foundation, and maintenance from the side of God alone. On that side we take our stand.

God’s part in the covenant stands absolutely sure, having this seal, “The Lord knoweth them that are His.” Our part in the covenant, which is to depart from iniquity and live in all godliness, is guaranteed by Jesus its Mediator and Surety. He, through the blood of the everlasting covenant, makes you “perfect in every good work to do His will, working in you that which is well-pleasing in His sight.” This He pledges in His unconditional covenant, saying not, “If you will do your part, I will do My part,” but “I will and you shall.”

The word covenant is here properly translatedtestament, the idea being of a last will and testament which originates only with the decree of the Testator (Heb. 9:16, 17). Of necessity, the drawing up of that last will and testament is strictly unilateral. So with the affixing of the seal in the blood of the Testator. In this way alone God reveals Himself just and the justifier of the ungodly (Rom. 4:5).

Members of the covenant are not all men (it is not a “common grace” covenant), but those who belong to “the great Shepherd of the sheep”; they are the sheep. Then how may you know that you are in the covenant? Do you trust alone in the power, of the blood to save you? Do you want to believe you are one of His sheep? Then He has already saved you. He will also keep you to the end and through eternity with an everlasting salvation.

Covenant theology gives the glory to God alone. Other theologies magnify man, perhaps man’s little finger, or man’s two cents, his boasted power to “accept Jesus as his Savior.” These other theologies teach that it is all uncertain whether any shall be saved, it being just as possible that not one ever come to Jesus. But covenant theology stops every mouth, lest any should boast, so that a saved person gives all the glory to God. Our last mercy on earth will be covenant mercy; our first mercy in heaven, covenant mercy.

Its Intended Effect. “For this is My blood of the new covenant, which is shed for many, for the remission of sins.” This many does not mean “all men as ever were, are, and ever shall be.” For “many (not all) will say unto Me in that day, ‘Lord! Lord! . . .’ ” (Matt. 7:22). Also, “the love of many (not all) shall wax cold” (Matt. 24:12). Manyis here used in the sense of “some.” Many is also used in exclusive reference to God’s own people, as in, “the Son of Man gave His life a ransom for many” (Matt. 20:28). God’s people are believers, and “as many as were ordained to eternal life believed” (Acts 13:48). Gods people are the elect, and our great high priest prays for them all, for He said in prayer to the Father, “Thou hast given Him power over all flesh that He should give eternal life to as many as Thou hast given Him” (John 17:2). John Gill put it this way: “the persons on whom He confers this gift are not all men, but such as the Father in the everlasting covenant has given to Him as His people and portion, His spouse and children, His jewels and His treasure, to be saved and enjoyed by Him: whom He has chosen and preserved in Him, and made His care and charge. To these, and every one of these, Christ gives this great blessing (John 17:2); nor shall any of them come short of it; and it is for . . . this that all creatures and things, all power in heaven and in earth, are given to Him.” So all through this New Testament dispensation He is “bringing many sons unto glory” (Heb. 2:10). He has chosen them to Glory, prepared it for them and them for it; He will infallibly lead them to it!

“The blood of the new covenant is shed . . . for the remission of sins.” The word remission means a releasing, a release from a debt. Man owes God a debt of obedience, which, with the Fall, he failed to pay. Fallen man became morally, spiritually, and totally impotent, incapable of doing any good and inclined to all evil. This debt, in arrears by ten thousand talents with nothing to pay it off, could only daily increase. Yet to this was added the debt of punishment for disobedience. Now man owes the double debt of (1) perfect, personal, and perpetual obedience to His law, and (2) the debt of punishment for his fall by disobedience. He is called to account for this double debt. For every transgression of the law shall receive a just recompense of reward, that of righteous judgment and punishment, either in the sinner himself, or in a surety who pays the debt on his behalf. “Is there no (other) way by which we may escape that punishment (that debt), and be again received into favor? God will have His justice satisfied!” Payment must be exacted from us who owe it all. We must pay the penalty either personally or vicariously. To do so personally would mean to endure extreme, that is, everlasting punishment of body and soul in hell. Our only hope is in the double debt being paid off vicariously, by our Representative, our Savior, who with His precious blood has fully satisfied for all our sins and delivered us from all the power of the devil. In that way alone are we released from our debt. So we are not our own, but are bought with the infinitely precious price of His own blood. The debt of sin and the penalty of death are justly put away. The Lord cannot deny Himself or deny His own holy nature by forgiving sin at the expense of His justice. Jesus paid it all with His own life, blood, and death. Thus His the justice, ours the mercy. 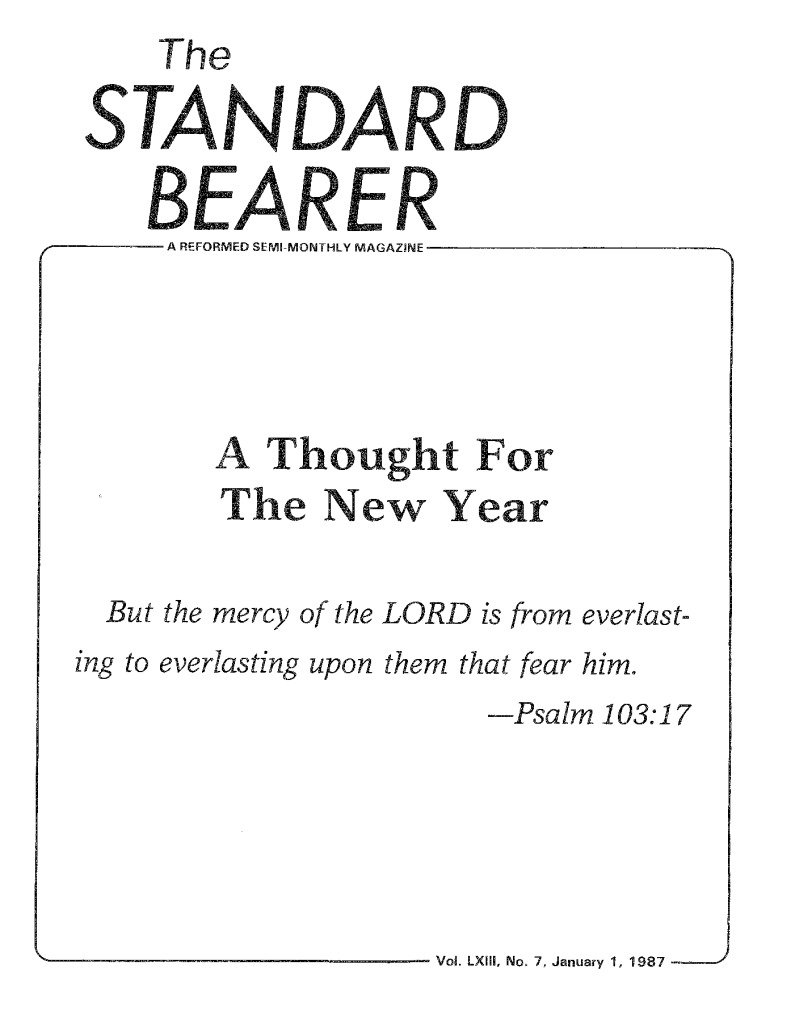