We have seen that the gospel according to John shows the personal and private ministry of Jesus with individuals. In chapter 3 the Lord dealt with Nicodemus, a man from the self-righteous, formalistic Pharisees, who had been taught that one cannot enter the kingdom unless he is born again by the Spirit of God. Now the Savoir confronts an entirely different person, who is also one of the sheep entrusted to Him of the Father. The Samaritan woman belonged to a people despised by the Jews. Besides, she herself was ignorant, carnally-minded, and living in adultery. He gathers her to Himself in a way which is again filled with the knowledge and compassion of the Shepherd of the sheep. The Savior reveals her sin and opens her eyes to see Him as the Christ, the living water of salvation.

The setting for this memorable encounter is found in Jesus’ return from Judea- to Galilee. He leaves Judea because He knew His increased popularity would bring the resentment of the religious leaders. The Lord does not want a premature crisis. He therefore separates Himself from them.

When we read that “he must needs go through Samaria,” we should understand that at the heart of this necessity is the will of His Father. The Lord knew this woman as one given to Him of His Father’s election, and He goes forth to seek and to save.

The Jews despised the Samaritans as a people of mixed origins and perverted religion. The Samaritans were a mixture of the remnants of the ten tribes left in the land at the time of the destruction under the Assyrians and people of other eastern nations brought to Canaan by the Assyrian kings in order to denationalize the Jews (see II Kings 17, especially verses 24-27). They had developed a religion which was a combination of the Pentateuch and paganism. The center of their worship was on Mt. Gerizim, where the ruins of a temple remained. Mutual contempt prevailed between the Jews and the Samaritans. We should not think that they had no business contact with each other and never traveled through each others’ land. Yet plainly there was no kindness lost between them. The Jews saw the Samaritans as being of mixed blood and of corrupted worship.

At least four things stand out in the way the Lord drew this woman to know and believe in Him as the Christ.

1. Jesus uses the illustration of “living water” to show the truth of the spiritual blessings of salvation which He has come to give to His people. These blessings include righteousness and the true knowledge of God, the favor and love of God, and eternal life in communion with God. These alone can satisfy man’s deepest need. As without water we die, so without the salvation that Christ alone can give we are dead and dwell in a dry and thirsty land where we can never find satisfaction.

2. In order for the Samaritan woman to come to know her need of the salvation that is to be found alone in Jesus, it was first of all necessary for her to come to the knowledge of her great sinfulness. This woman was living in adultery, and probably had committed that sin with one man after another. Jesus does not ignore her life of sm. He never does. His question about her husband is like an arrow which pierced her conscience. Until one is brought to feel his sinfulness and to see himself as God sees him, he cannot taste the living water Christ gives.

3. Jesus teaches her of the true worship of God. This worship shall no longer be confined to one place, or any place. It does not center in the external. Rather it consists in the renewed heart rendering sincere homage to God and is to be conducted in full harmony with the truth of God as revealed in His Word.

4. Jesus clearly identifies Himself to the woman as the promised Christ. This was the point to which He had been leading her from the outset. She must know two things: who she is—a sinner; and who He is—the Christ of God. Then she (we) shall never thirst again!

1.The setting for Jesus’ encounter with the Samaritan woman (vv. 1- 6).

a. The reason for Jesus’ leaving Judea and going to Galilee (vv. l-3).

b. The necessity for His going through Samaria (v. 4).

c. Jesus stops at Jacob’s well near the city of Shechem and under the shadow of Mt. Gerizim (vv. 5, 6).

a. Jesus’ request of the woman and the surprised response of the woman that He (a Jew) would speak to her a Samaritan (vv. 7-9).

b. The Lord provokes her curiosity by telling her of the living water which He has, and the woman’s resultant perplexity (vv. 10-12).

c. Jesus explains the spiritual character of the living water which He gives, and the woman’s request (vv. 13-15).

f. The woman’s statement about the promise of the Messiah, and Jesus’ declaration to her that He is that Christ (vv. 25, 26).

1. Why did the Lord leave Judea when He knew that the Pharisees had heard of His growing popularity?

2. What is the significance of the fact that Jesus Himself never personally baptized but only His disciples? (see I Cor. 1:13-17).

4. What do you know of the Samaritans: their origins? beliefs? place of worship? relationship to the Jews? (see II Kings 17; Ezra 2, 3; Nehemiah 4).

5. In Matthew 10:5 the Lord instructs the disciples whom He sends out not to enter Samaria. Yet He Himself goes there to seek and save this woman. Explain the significance of this, especially in light of the fact that at His Ascension He commands the church to go to Samaria and unto the uttermost parts of the world (Acts 1:8; Acts 8:5, 6).

6. Show the perfect wisdom of the Lord in dealing with this woman, how He draws her out and instructs her in the truth of salvation. Show that the Lord is in control of the conversation and directs it in such a way that the woman is shown her need and that Jesus is the Christ. What lesson may we learn from this?

7. What does Christ mean when He likens salvation to “living water” which He alone is able to give? Enumerate the different thoughts suggested in this figure.

9. Explain the need of the woman to know her sin if she is to understand what this living water is.

10. Why does the woman ask about the proper place of worship?

11. What does it mean that salvation is of the Jews?

12. What does the Lord teach about the true worship of God in response to the woman’s question?

13. What is the significance of the woman’s introducing the truth of the promise of the Messiah? Does this show that the Spirit was indeed at work in her?

14. What is the significance of Jesus’ plainly identifying Himself to her as the Christ, especially in light of the fact that He would often forbid His disciples from doing so? 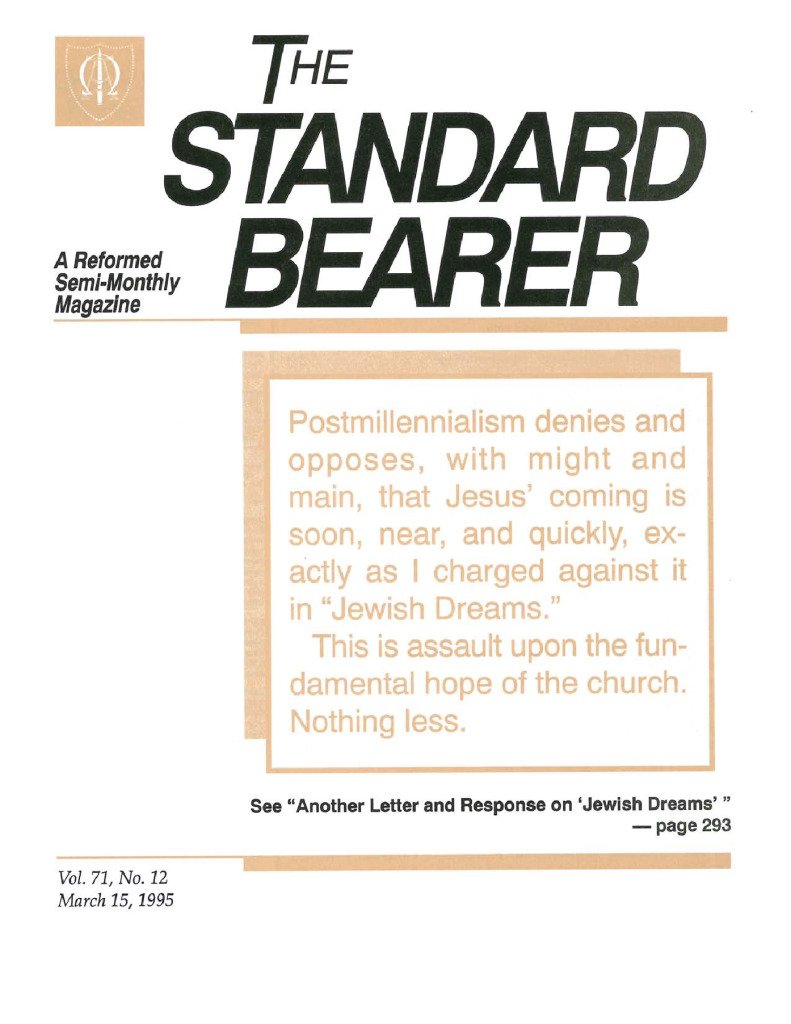