Its Supralapsarian Character (continued) Its Purpose

Its Supralapsarian Character (continued) Its Purpose

Election takes us back to the beginning of things, to the beginning of God’s counsel, since it has to do with what has priority in the divine mind. We have been dealing with the divine order of God’s eternal purpose as that order is revealed in and may be deduced from Scripture. This, of course, means that we have been setting forth Supralapsarianism, for that, we believe, is the predestinarian view to be found in Scripture. While still on the subject, it is highly recommended that you read the articles in The Standard Bearer, Vol. 26, which may yet be obtainable, on “Supralasarianism and Infralapsarianism.” We now propose a brief look at the order of the decree of God as held by various theological systems, beginning with one of the lowest of them.

First, there is Semi-Pelagianism, the motto of which is, “God can foreknow without foreordaining.” This view makes the decree of God one “to save individuals.” The order is: 1. Decree to create, including man, as a free moral agent, fallible, with his will contingent (unpredictable). 2. Foreseeing the Fall of man, God decreed through Christ to provide free salvation for all. 3. Foreseeing that certain individuals would accept the provision of salvation, while others would continue to reject it to the last, God from eternity chose those He foresaw would accept it. The individuals He foresaw would not believe He decreed to punish eternally.

Third, there is Amyraldianism, the motto of which is, “God has a general love to all men.” This view supposes a decree “theoretically to save all.” The order is: 1. The decree of possible universal salvation. 2. The decree to offer salvation to all men if they believe in Christ. 3. The decree to give all men a natural ability to repent and believe. 4. The decree to permit the moral inability (Fall) of all men. 5. The decree to save those willing to believe.—Note: According to Amyraldianism there is salvation for the heathen who never come to hear the Gospel, if they accept the general grace of providence.

Fourth, there is Infralapsarianism. Its motto is, “God cannot love a nonentity.” Involved is a “decree to save sinners.” The Infra-order has a decree: 1. to create in perfection for God’s glory. (A decree in general). 2. to permit the Fall. 3. to elect from the mass of fallen men the “vessels of mercy.” 4. to pass by the rest of mankind and ordain them to dishonor and wrath for their sin. 5. to send Christ for the redemption of the elect. 6. to leave the rest of mankind in their sins and to their just punishment.

Fifth, there is Supralapsarianism. Its motto is, “The last thing in execution is the first thing in purpose.” Or, “What is first in design is the last in accomplishment.” It views the decree as one “to save the elect.” This is a decree of predestination. The Supra-order has a decree: 1. that God’s glory be revealed in Christ and His Church. 2. the election of Christ as Head of the Church. 3. that from all treatable men (men to be created), a definite number be the elect church in Christ, and a definite number of men be “vessels of wrath.” 4. of justification for the elect, and of damnation for the reprobate. 5. of the Fall of those elected and reprobated men. 6. to create these men.

Sixth, there is Supralapsarianism as held in the Protestant Reformed point of view. Our motto is, “God is God.” “God is always first.” The decree is regarded as one “to reveal God’s covenant.” Our supralapsarianism: is especially concerned with the question, “What in the decree is the main object? and what is subservient to that main object?” What we believe to be the most scriptural order of the decree is: 1. God’s decree to reveal His own glory in the establishment of His covenant. 2. Decree to realize this purpose in the Son of God becoming Christ, the Image of the invisible God, the Firstborn of every creature, the Beginning of the New Creation of God, which He became as the First begotten of the dead, that in Him all the fulness of God might dwell. 3. Decree for Christ, and for the revelation of His fullness, the Church and all the elect. (1) In this decree, Christ is not ordained for the Church, but the Church for Christ. (b) The Church is His Body, and serves the purpose of revealing the fullness in Him. 4. To realize this Church, and thus the glory of Christ, the reprobate are predetermined as vessels of wrath. (a) Reprobation serves the purpose of election, as chaff serves the ripening and harvesting of the wheat. Is. 43:3, 4. (b) All sin and evil are ordained of God as subservient to the good. Gen. 50:20. 5. In the Counsel of God, everything else in heaven and on earth are purposed as means to the realization of both election and reprobation, and therefore of the glory of God’s mercy and justice in Christ. Therefore, all things must work together for the good of them that love God, to them who are the called. according to His eternal purpose.

It is to be noted that neither in the Infra- nor Supralapsarian order is there to be found any “common grace,” but that this error is either expressed or implied in the order of Pelagianism, Arminianism and Amyraldianism.

What did God plan and purpose for us in His decree of election? He purposed that we should be holy. “He hath chosen us in Him before the foundation of the world that we should be holy and without blame before Him” (Eph. 1:4). We have already pointed out that this is not the imperfect inner holiness which we have by grace in this life, but the perfect holiness of glory ordained for us in the world to come. The Lord has indeed ordained both for us, but the latter is especially intended, because it is absolutely perfect. It is “without blame” before God. He finds not a flaw in it.

That holiness lies ahead of us. We do not have it yet. But personal, subjective holiness we do have, or we would not get to heaven. It is one “without which no man shall see the Lord.” Though it is a gradual grace working in us, and one which constantly reminds us of our indwelling sin, yet it is a down payment on the perfect holiness coming in glory.

A purpose God had for us even prior to being chosen to holiness was that of adoption. Eph. 1:5. We owe our adoption as sons ultimately to God’s decree of the end He purposed, not to the decree of the means. Then we owe the foundation of our adoption to our relation to Christ’s person, rather than to His atoning work. We were predestinated to the adoption of sons not on the basis of redemption (infra), but, going farther back, on Christ’s natural sonship. Our justification is owed to the decree of the means. “In whom we have redemption, through His blood, the forgiveness of sin.” (Eph. 1:7). Our adoption is, however, through Christ as God’s natural Son and we His brethren in relation to His person. “Ye were called unto the fellowship of His Son.” (I Cor. 1:9).

Still, it must be understood that because of our fall in Adam, adoption can be bestowed on us no other way than through His merits. So the Son became incarnate “to redeem them that were under the law, that we might receive the adoption of sons.” (Gal. 4:5). For sin had created an obstacle to the bestowal of adoption. But Christ’s redemption was not realized to procure our adoption, but only “that we might receive” it, What procured it was the decree of the covenant.

God’s purpose also was that we be saved, a design He had subservient to His main object to bring many sons to glory. This is expressed in II Tim. 1:9, “Who hath saved us, and called us with a holy calling, not according to our works, but according to His own purpose and grace which was given us in Christ Jesus before eternal ages.” (Gk.) This grace that God gave only His elect from all eternity was a preredemptive grace, a super-creation grace, before the foundation of the world! God by that eternal particular purpose which He purposed in Christ Jesus did ordain us to and in a super-creation union with Himself, our highest and ultimate destiny. Grace is the source and fountain of it all, including redemption, and all the rest comprehended under the term “salvation.” Salvation (“hath saved us”) is the end of it all, and effectual calling through the Holy Spirit and the preaching of the Gospel is the stream which flows from that source to that end. His determining, exclusive purpose contains the answer to, why the chosen ones rather than the others were thus saved and called.

It was God’s purpose according to election to have His people for Himself, i.e., for Christ. He is the ultimate end of the decree of predestination: “having predestinated us to the adoption of sons by Jesus Christ to Himself,” (Eph. 1:5). These last two words are very well translated “for Him,” i.e., for Jesus Christ. We have been chosen to holiness in Him, predestinated to adoptionthrough Him, and were so ordained for Him; as the great end, aim, Alpha and Omega of all things. Then, since we were predestinated for Him, the predestination was not on the foresight of man’s fall or man’s conversion. We were predestinated on the foresight of Christ as Head of a glorified race. Christ was not set in the decree nor brought into the world chiefly on account of sin and for the work of redemption. But Christ through redemption makes an end of sin, so becoming the Head over all things to the Church. Christ was not ultimately given for us; He was not subject to us. We were given to Him. Christ is not ordained for the Church. The Church was “for Him!” Christ is the grand end of all things (Eph. 1:10). Redemption itself is for His own glory before it is for our need (Eph. 1:6, 12). 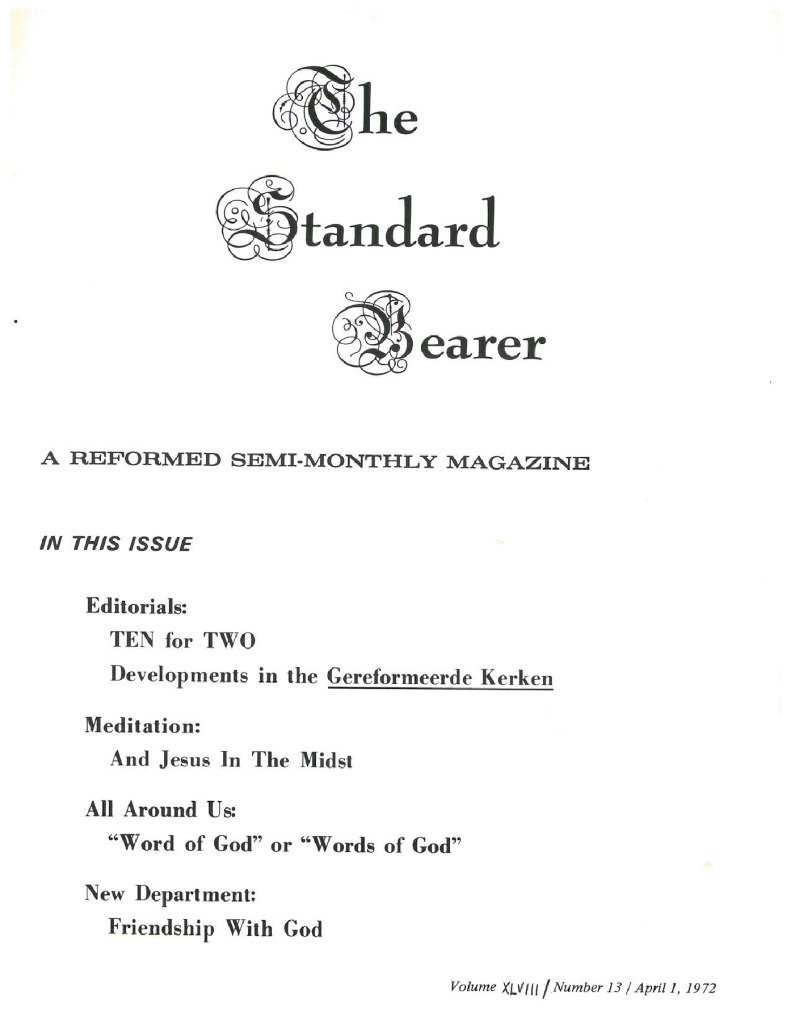