Its Resistance, Its Proclamation

Its Resistance, Its Proclamation

Another objection to the truth of predestination is that it precludes the use of God-ordained means. The objection arises from a wrong inference, inferring that predestination means that something is bound to happen entirely apart from any means. Some, then, think that there are people who will be saved although remaining utterly ignorant of the gospel, never see a Bible, never hear a preacher of the Word, nor ever hear the name of Christ. The objection would be to the point if it were made, not to the Reformed doctrine of predestination, but to that strange conception of predestination which ordains ends without any regard to means. Then the objection would be legitimately leveled against a Mohammedanized predestination, which would be fatalistic and Deistic. For this strange predestination assumes that God fulfils His purposes without the use of instrumental means and secondary agencies. God, indeed, has chosen His elect, not on the foresight of their faith, but to faith, to salvation, andto every saving good. But it still remains that God from the beginning hath so chosen you “through (and not apart from) sanctification of the Spirit and belief of the truth” (II Thess. 2:13). So that sanctification of life and faith are not conditions to be met for the realization of salvation, but are a very part of the chosen-to salvation. Salvation has its beginning in regeneration, its continuance in faith and sanctification of life, and its end in glorification.

God ordained, to save His people by means of faith and sanctification. To say that the elect will be saved absolutely without the use of means is absurdly impossible. We are not thinking of man’s means, but God’s means, the means He has ordained and commanded to be used. Abraham was ordained to be the father of many nations. Was he so ordained without the use of means? To say so, would be like saying he would be, even if he had died in infancy. Hezekiah was ordained to live fifteen extra years, but could he have so lived without food or sleep? The decree of God was revealed to Joshua that he-would conquer Jericho, but could this have been realized if Israel had sat down under their own fig tree with folded arms? God had also ordained how the city was to be taken.

There are the heathen. Some of them God has ordained from all eternity to life and salvation. He has ordained that some of them shall call upon the name of the Lord. They have never heard the name of the Lord. But they shall hear it and call upon His name, and “whosoever shall call upon the name of the Lord shall be saved” (Rom. 10:13). They really cannot call on one they do not know or believe. For “how . . . shall they call on Him in whom they have not believed? and how shall they believe in Him whom they have not heard? and how shall they hear without a preacher? and how shall they preach, except they be sent?” (10:14f, ASV). God does deign to use the agency of human instruments, as preachers, and the preaching of the gospel, unto the salvation of His elect people. Does this make salvation dependent upon man? Not when it is all dependent upon His furnishing, setting forth, using and blessing, the means!

Arminian resistance to this truth appeals to certain Scripture passages which are imagined to be opposed to it, passages such as, Prov. 1:24, 25; Isa. 65:2and Matt. 23:37. The last mentioned reads, “O Jerusalem! Jerusalem! thou that killest the prophets, and stonest them that are sent unto thee, how often would I have gathered thy children together, even as a hen gathereth her chickens under her wings, and ye would not!” This outcry of Christ’s is said to be incompatible with Calvinism’s (and therefore Scripture’s) irresistible grace, since it teaches plainly that the will of God can be resisted and the desire of Christ (God!) can be frustrated. Such reasoning flies in the face of what is the heart of Scripture truth, that God is God. Prove that the decrees of God can fail, and there is proof that God is not God. There you have the central error of Arminian thinking. On this passage John Gill wrote, ” . . . this Scripture . . . they are ready to produce on every occasion against the doctrines of election and reprobation, particular redemption, and the irresistible power of God in conversion; and in favor of sufficient grace and of free will and power in man. . .” Notice what Christ in these words does not say. He does not say, How often I would have gathered you, and ye would not. Nor, I would have gathered thy children, andthey would not. He said, “I would have gathered thychildren, and ye would not.” The Lord does not teach here that it was His purpose to gather all mankind without exception, nor that He wanted to convert persons who would not be converted. We have here two wills, the will of Christ and the will of man. Christ wills Yes. Man wills No. Christ says, I would. Man says, I would not. The question is, which of these two wills shall have its way? for one or the other must be sovereign. Either “I would” must win out, and then “thy children” must be gathered, or “ye would not” must win out, and then they cannot be gathered. When the Lord says, “I would,” can man’s “I will not” stop Him? “Whatsoever the Lord pleased, that did He!”

Doctrinal preaching has all but died out in this generation. Even where the Heidleberg Catechism is still read from the pulpit, it is often used only as a springboard to digress into anecdotal orations. The Word of God, by its very nature, demands preaching that is both doctrinal and practical. The Belgic Confession is doctrinal in emphasis. The Heidelberg Catechism is personal and practical in emphasis. Where the Heidelberg Catechism is still faithfully studied and used there can really be no valid claim that we need more experiential preaching, and not so much dry doctrine. Sometimes you hear it said, “More of Christ, not theology,” which presents, really, a foolish, dangerous outlook. There is no way to test practical preaching, as to whether it is sound, if it be divorced from the doctrine contained in Scripture. Without that doctrine, where is the standard of judgment? The “Christ,-not-doctrine” philosophy is impossible. Christ cannot be known, understood, recognized nor received unless He is preached. Without doctrine He cannot be preached.

Why is the great truth of election almost exclusively omitted from the pulpits in the land? One reason is because of ministerial laziness. Most ministers do not care to spend much time in the study. When you discover the long list of Communist-front connections some “ministers” have had, you know they rarely, if ever, made use of the study in the work of the church and of the gospel. Real study is physically and mentally taxing. It takes much more painful effort to prepare a series of sermons on the doctrine of the church than to present addresses on prayer, missions, and ecumenism. Sound expositional preaching requires intensive study of Scripture and hours of perusal of the older biblical works. Many ministers, if they do put in as much as eight hours a day of work, spend it in visiting, in laboring for the advancement of Socialism, and in “concentrating”—on the golf course. They know nothing of “Give attendance to reading . . . take heed unto thyself and unto the doctrine: continue in them” (I Tim. 4:13, 16).

Another reason why predestination, and preaching in harmony with this great heart-truth, is absent from so many pulpits is because of a love for popularity. A preacher, so enamored, aims to please his auditors. He will preach only to crowded audiences. He intends to conform to public opinion, because he would rather hear, “Welcome to the club!” than to overhear the remark after sermon, “What can he possibly be talkingabout?” To borrow from Bunyan: although he goes by another name, he is a Rev. By-Ends. He is from the town of Fair-Speech, a pagan cultural center. The two-faced Janus is worshipped there. His family tree bears such twigs as Mr. Smoothsayer and Mr. Anything. He is a favorite with the young people, somewhat of a sportsman, a sculler, proficient at looking one way and rowing another. The minister in his hometown was a Dr. Two-Tongues. From him he soon learned the art of using two tongues with one mouth. He made a fortune as a result of his socially acceptable marriage into the long-standing family of the Feignings. Before every church service he dials the weather bureau. He must always know which way the wind is blowing. For he never preaches against wind and tide. He always sculls with the current and down the center channel. He is a very warm pulpit orator whenever Religion goes in his silver slippers. He is often seen walking with Religion on the avenue when the sun is shining, and, during parade, riding his float, when the people are applauding him. He was able to build a struggling church into a thriving cathedral with a great following, because, as he humbly puts it, he always had the luck to jump in with the present way of the times, whatever it was, took his chances, and came out tops. Ask him why he never finds time to preach the truth of election, and he will inform you that he could easily prepare a sermon on the subject fifteen minutes before retiring on Saturday night, but that at the only, and eleven o’clock, service his people would not know what he was talking about. Besides, he adds, “I shall never desert my old principles, since they are harmless and profitable.” By this he means that for the question posed he cannot stand the sight of you, and must hurry off to those who will be honored by his presence and glad of his company. If you should call after him the word of the inspired apostle, “For if I yet pleased men, I should not be the servant of Christ” (Gal. 1:10), he will retort, quickening his pace, that he is used to all manner of evil speaking against him falsely, for Christ’s sake. One thing he never learned, either from his finished education or his fashionable connections,—the difference between suffering as a Christian and being a scandal to the very name of Christianity! Nor can he honestly say, “I kept back nothing that was profitable unto you. For I have not shunned to declare unto you all the counsel of God . . . Wherefore . . . I am pure from the blood of all men” (Acts 20:20, 27, 26). 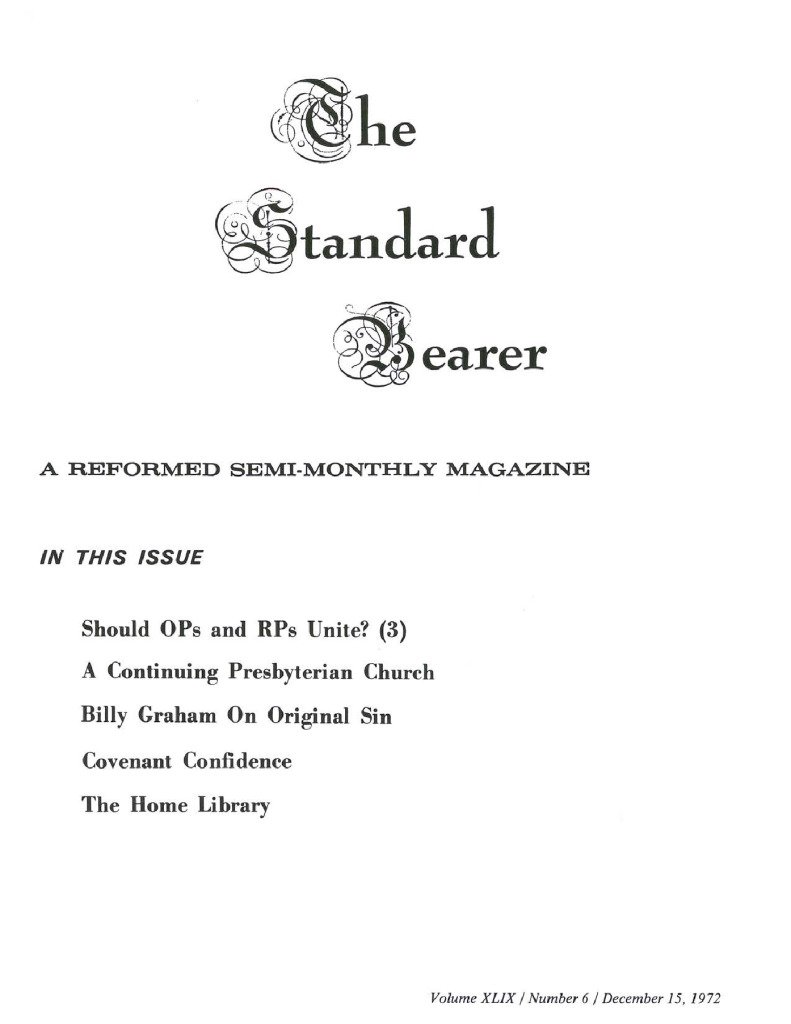