It Came to Pass in Those Days

It Came to Pass in Those Days

And it came to pass in those days, that there went out a decree from Caesar Augustus, that all the world should be taxed. (And this taxing was first made when Cyrenius was governor of Syria.) And all went to be taxed, everyone into his own city. And Joseph also went up from Galilee, out of the city of Nazareth, into Judea, unto the city of David, which is called Bethlehem; (because he was of the house and lineage of David:) to be taxed with Mary his espoused wife, being great with child. And so it was, that, while they were there, the days were accomplished that she should be delivered. And she brought forth her firstborn son, and wrapped him in swaddling clothes, and laid him in a manger, because there was no room for them in the inn. Luke 2:1-7

Our text is the most familiar of the accounts of the birth of the Lord Jesus.

Joseph and Mary travelled about ninety miles from Nazareth in Galilee to Bethlehem in Judea. It seems that the command of Caesar to be enrolled for a future tax came rather suddenly, forcing Joseph and Mary to travel so late in Mary’s pregnancy. It is understandable that they would have arrived after many others, as they were slowed by Mary’s condition. And it seems that on the night of their arrival at Bethlehem Mary was delivered of her firstborn child.

She wrapped Him in swaddling clothes and laid Him in a manger. The story is told so simply! Yet it is so profound.

God inspired Luke to detail the unusual circumstances of those days. Today, we might have told the story by giving more details about the misery of the trip or the difficulty of the delivery; and we certainly would want to know the weight and length of the infant. But God tells us about the emperor and his desire to increase his income by taxing everyone in his empire. The sovereign God, in His infinite wisdom, wants us to know that He is in control of every circumstance and that He uses all things to accomplish His purposes. God’s ways are past our finding out, but we do certainly see that He controls all things and that He does so for His own glory and for the sake of His beloved people.

Here we see the sovereign God of heaven use the Ro man emperor in far off Italy to bring about the location of the birth of the Messiah in little Bethlehem in Judea of Canaan. Israel was no longer an independent nation, governing herself. Instead she was, in those days, a part of the Roman empire. How had the glory departed from Israel! Sensitive to their lack of national dependency and strength, the sons of Abraham in those days thought primarily in terms of an earthly Messiah, not a spiritual one. Their focus was only on the earthly restoration of the glorious kingdom under David and Solomon.

But God is sovereign over all! His control is not limited to the realm of the spiritual. He controls all things in every part of the world in order to accomplish His purposes. Caesar serves the God of heaven! Whether he knew it or not! “The king’s heart is in the hand of the Lord, as the rivers of water: he turneth it whithersoever He will” (Prov. 21:1). Caesar’s purpose was to take a census or enrollment of all the people in the empire with a view to taxing them (which would take place twelve years later). God’s purpose was to bring Joseph and Mary out of the northern region of Canaan (Nazareth of Galilee) down to Bethlehem in Judea, where it was foretold that the Messiah would be born (Micah 5:2). The powers of darkness, without knowing it and even in spite of themselves, are used by Jehovah to accomplish His purposes for the salvation of the church of Christ. The greatest wonder in the history of the world is told in a most simple way: “the days were accomplished that she should be delivered.”

This is the record of God’s only begotten Son being manifest in human flesh and entering into this sinful world. This is the most significant moment in the history of the world as well as in the kingdom of God. That is why it constitutes the “fullness of the time” (Gal. 4:4). It is the central part of history for it is the wonder, the most profound mystery: God became man! He would be great and called the Son of the Highest, and He would sit on the throne of His father David (Luke 1:32).

But the wonder is almost lost from sight. It is told in the simplest language. The text by itself gives no indication that Mary’s child is the Son of God Himself. There is no divine glory shining around that manger. There is no “breaking news” interrupting regular broadcasting to tell everyone in the world. Instead, all is quiet. Yes, there is the visit of the angel and the heavenly host, but that is heard and seen only by a few lowly shepherds. And there is nothing of the wonder that can be seen—all we see is the likeness of flesh, sinful flesh (Rom. 8:3). Jesus was brought forth in the same way as all other babies. He came only when her days were accomplished—she reached her due date. He was flesh of her flesh. He was as helpless as any other baby, needing to be washed and wrapped, nursed and laid down. Truly it can be said that in the flesh of man He was of no reputation (Phil. 2:7). He had no glory or beauty that He should be desired (Is. 53:2).

Further, it came to pass in those days that there was “no room for them in the inn.” Thus, He was laid in a manger in a stable area. The greatest wonder takes place, not in a royal palace, but in a barn! So striking is this part of His birth that it serves as the sign that the angel gave to the shepherds so they might identify Him as the Messiah (v. 12).

Yet more evidence of the wonder being lost from human sight is the fact that this greatest of all wonders takes place in Bethlehem. It may be called the city of David, but in those days it held little significance. It was at that time little among the thousands of Judah (Micah 5:2). And then consider that the King of kings was hidden in swaddling clothes and laid in a manger as an expression of His abject poverty. The most basic necessities of a new born child are the poorest of all. “…For your sakes he became poor, that ye through his poverty might be rich” (II Cor. 8:9).

What significance can be drawn from this description of the birth of the Messiah?

It is God’s will that the description of the birth of the promised Messiah forcefully convey His true humanity. He was very real man, body and soul. His birth was like that of every other human. In addition, this description of the Messiah’s birth powerfully communicates His humility. He “made himself of no reputation, and took upon him the form of a servant, and was made in the likeness of men” (Phil. 2:7).

He was rejected! The powers of spiritual darkness hated and despised Him. The world did. Herod was Satan’s instrument to attempt to kill Him (Matt. 2). And the church of His day did. Also the church of our day has nothing to give to Him or to help Him. And that is the way God would have it, for no power, riches and glory of this world could aid Him in the establishment of His kingdom. No amount of good works can help Him. His abject poverty represents our complete spiritual poverty: we are dead in sin and misery. We have nothing to contribute to His work of saving His people. No one and nothing can aid Him in the work of redemption!

This description of the Messiah’s birth declares that it is all of Him who gave His all to accomplish the work of redemption. The Person of God the Son entered into sinful flesh and was laid in a manger with absolutely nothing of this world. Though He was rich, for our sake He became poor, that we through His poverty might become rich (II Cor. 8:9). In this way He brings the perfect sacrifice of Himself for our sin and delivers us from all the dominion of sin. He fights His way into righteousness and life by the power of His grace.

This is the way the life of the Savior (from sin) begins! He even must and does make room for Himself in the hearts of those given Him of the Father. By the irresistible power of His grace He accomplishes everything that is necessary to save His people from their sin.

Thus all the glory is His! Praised be His name forever and ever! 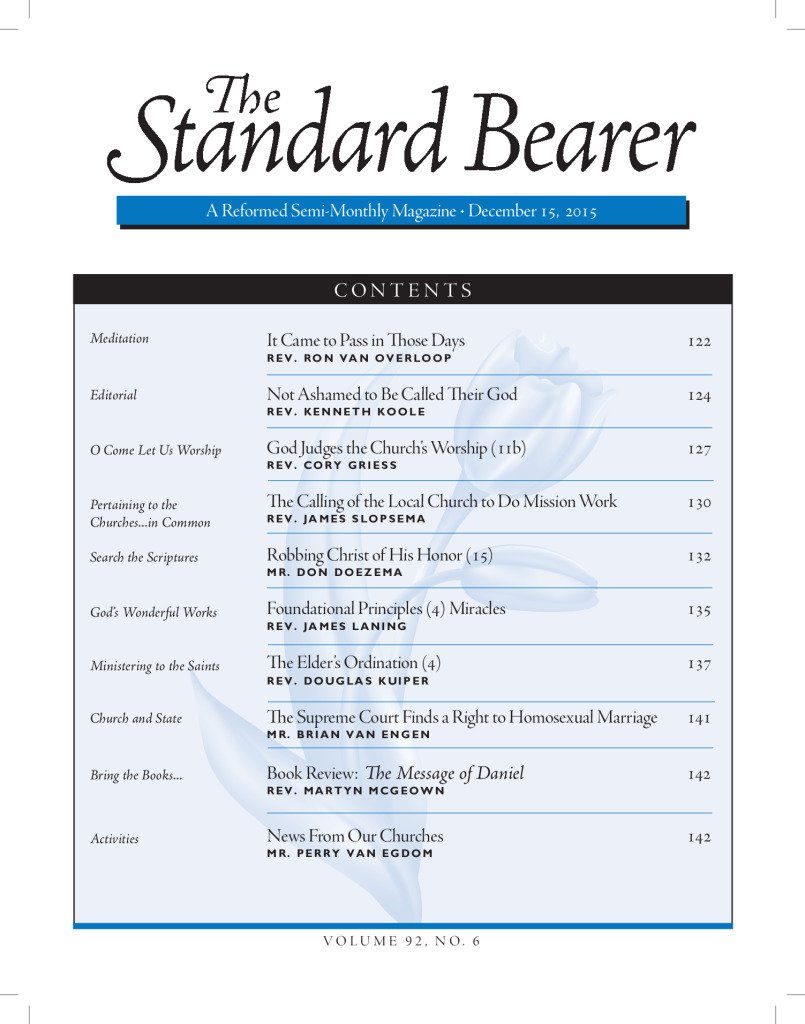