Mr. Wigger is an elder in the Protestant Reformed Church of Hudsonville, Michigan. Evangelism Activities This fall, Christianity on Campus, a group which has for its advisors, members of the Evangelism Committee of the Grace PRC in Standale, MI, is again sponsoring a series of ten lecture/discussions which have to do with the fundamentals of Christian faith, and this in light of contemporary issues. These meetings are scheduled for Wednesday evenings at 7:30 in the Cook DeWitt Chapel on the campus of Grand Valley State University. The meetings were also intended to provide application to living and enjoying the Christian...

September 10, 1997 at Kalamazoo Protestant Reformed Church Classis East met in regular session on Wednesday, September 10, 1997. The churches were all represented by two delegates. Rev. R. Van Overloop chaired this session. The primary business of this classis was the examination of Pastors-elect James Laning and Martin VanderWal. After preaching full-length sermons, the examinees were subjected to an oral examination. With thanksgiving to God, the classis approved these examinations and authorized the congregation of Hope PRC to proceed with the ordination and installation of James Laning, and the congregation of Covenant PRC to proceed with the ordination and...

Prof. Engelsma is professor of Dogmatics and Old Testament in the Protestant Reformed Seminary. Worthwhile books in English on the Synod of Dordt and its doctrinal decisions, though rare, are available. All that will be mentioned here are written for the people, and not only for the theologian. Such is the importance of that synod and its doctrinal deliverances (known as “canons”) that Reformed men and women should know them well. Pride of place goes to Homer C. Hoeksema’s The Voice of Our Fathers, the only thorough commentary on the Canons in English. The work includes corrections of the English...

Rev. Cammenga is pastor of Southwest Protestant Reformed Church in Grandville, Michigan. When one thinks of the Synod of Dordrecht, 1618-19, what comes to mind first of all are the doctrinal pronouncements made by the synod against the Arminians. Undoubtedly the Canons of Dordt are the great work for which this historic Dutch Reformed synod is known. The Canons repudiated the Arminian heresy that threatened the Dutch Reformed churches and defended the faith of the Reformation, in particular the sovereignty of God’s grace in the salvation of sinners. But our debt to Dordt goes beyond its five canons. The work...

Rev. Koole is pastor of Faith Protestant Reformed Church in Jenison, Michigan. When the Enemy launched a full frontal assault against the doctrinal walls of the church, the church responded with a ‘Canons’ blast of confessional truth to ward off the assault, to show that there is plenty of life in the old city yet, and that those “set for the defence of the gospel” (Phil. 1:17) do not intend to yield one precious inch of the heritage of truth once delivered to the saints. This had been the response of the church in the 4th and 5th centuries when...

Rev. Terpstra is pastor of the Protestant Reformed Church of Holland, Michigan

Prof. Hanko is professor of Church History and New Testament in the Protestant Reformed Seminary. Introduction The Synod of Dordrecht was the greatest assembly of Reformed churches that ever met. Though some may argue that Dordt was exceeded in greatness by the Westminster Assembly, which met less than 30 years later, Westminster was not, as Dordt was, a gathering of the Reformed churches from all Europe. Nor were the theologians at Dordt in any respect inferior in learning, skill in debate, and genuine orthodoxy than the best of Westminster. But the synod was necessary, after all, because of heretics present...

The story is told of the delegate to the Synod of Dordt who, ever afterwards, when the synod was mentioned, doffed his hat and exclaimed, “Oh, most holy synod!” This is not the attitude toward the synod that prevails in Reformed churches today. But it should be. It is ours. For the Synod of Dordt (1618, 1619) defended the gospel of salvation by (sovereign) grace alone in an hour when the gospel was under attack by the subtlest form of the lie that had ever assailed it. That lie was the teaching that the salvation of the sinner depends upon... 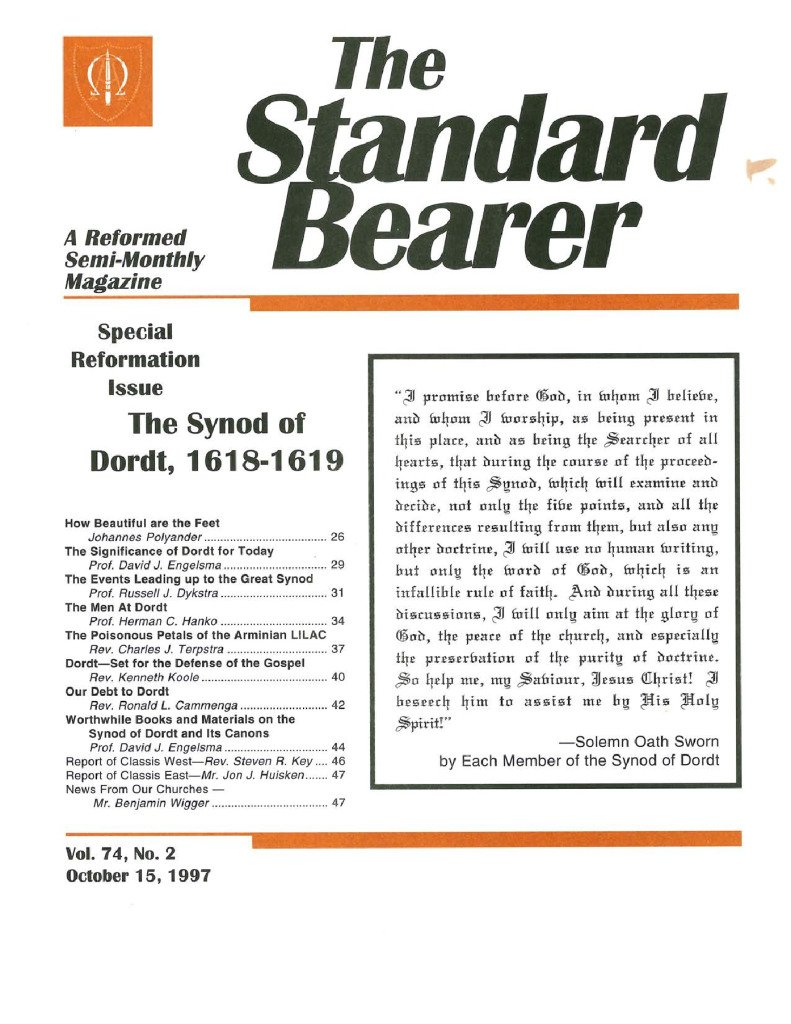