The elders of Hope Church, Redlands, California have been busy traveling to Ripon to exercise oversight of our Mission work and to encourage the group of saints there and Rev. Houck. Remember this work of God in your prayers.

The Mystery of the “Seventy Weeks” in Daniel 9, Chapter XX Gabriel the Messenger From God’s Throne (con’t.)

It is our purpose to write a series of articles on the Christian family for our contribution to this department for the year. Although much has been written on this subject lately we believe that this subject is of such great importance and that it has so many facets to it that it is one that is worthy of further consideration. The family is the most fundamental of all the institutions which God in His infinite wisdom has established among men. There is none of greater importance. It is basic to all the other institutions of the church, the state,...

The Reformers and the Church of Rome, as we have seen, stood in open opposition to one another on the issue of Scripture’s sole authority and all-sufficiency. Rome taught that there stood alongside of Scripture a second authority, the traditions of the church, which it claimed were received from the apostles and of equal value with the Scriptures. Rome also set the church above both Scripture and tradition as the source from which both received their authority and power.

In the next several articles we intend to study the baptism form as we find it in the back of our Psalter.

Discerning Comments In the Banner, April 29, 1985, a discerning letter is presented in “Voices” which makes several pointed comments about the relationship of “common grace” with the present direction taken by the Christian Reformed Church. One would hope that many have taken note of it:

A prisoner who has been sentenced to die in the electric chair, and who through “friends” outside the prison succeeds in getting the judge, who sentenced him, shot to death, and his home burned to the ground, will not by these deeds escape the punishment decreed for him, and save his own life. His wrath may be pacified. He may gloat over the fact that he got revenge upon his enemy. But though the judge is dead, his sentence stands. And those who had been appointed to carry out the sentence will execute it in due time.

(The last paragraph dealt with the distinction between the true and the false church and the importance of distinguishing between the two for the work of church reformation.)

Under the title “Covenant and Election” the Rev. W. Pouwelse devotes two more rather lengthy articles (Clarion, Feb. 9, 1985 and Feb. 22, 1985) to my charges that he distorts the doctrinal position of the Protestant Reformed Churches and the history of events in the 1950s, especially of the schism of 1953. 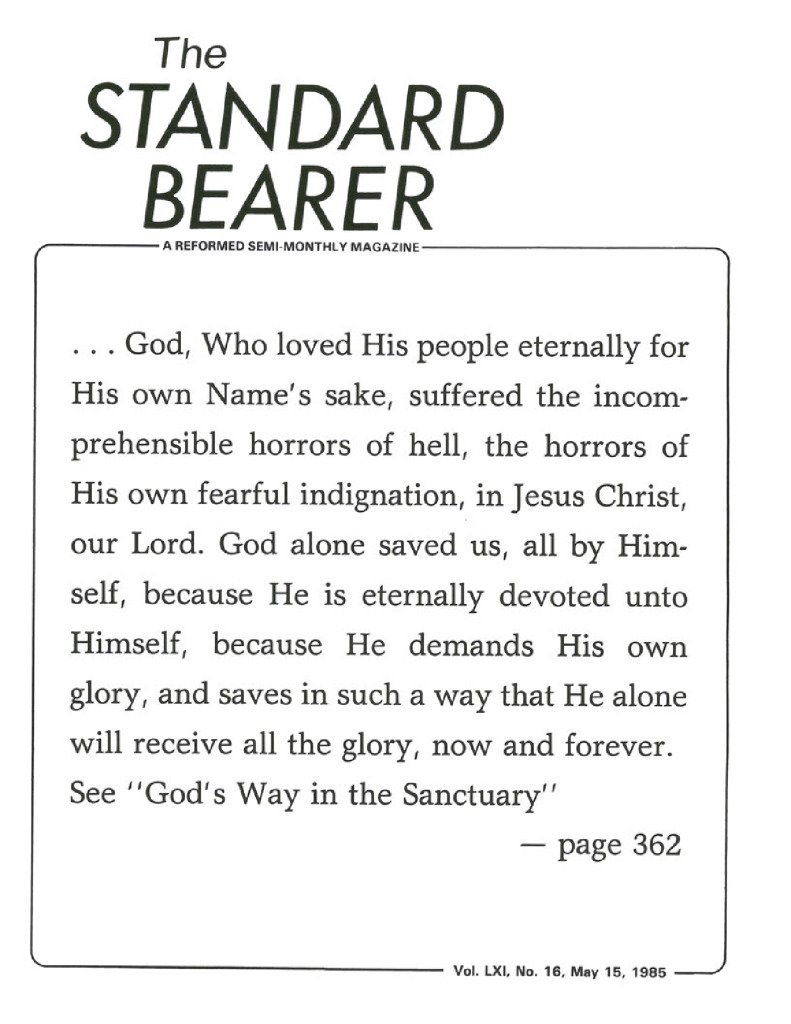