In the September 7 bulletin of our First Church in Grand Rapids we read: “Church News: Prof. Hoeksema has declined his call to Hope; Rev. Kamps declined Redlands; Holland has called Rev. Kamps.” Such an announcement would: attract little attention except for the fact that the clerk of First happens to be none other than K.G.V., our former news editor. Either Mr. Vink is so programmed to church news that he cannot help himself, or he loved the work so much that he desires to continue it on a miniature scale.

FIRST EPISTLE OF JOHN, Expository Messages, by Robert S. Candlish; Kregel Publications, 1979; 577 pp., $12.95. (Review by Prof. H. Hanko) Candlish lived from 1806-1873, was a Scats pastor, and became one of the most respected pastors in the Free Church of Scotland after the death of Thomas Chalmer. He served also as principal of New College in, Edinburgh.

Writing a Minister-elect A question was given to me by one of the readers of the Standard Bearer who wishes to know whether it is proper for the consistory and members of a vacant congregation to write to a minister whom they have called.

(Kuyper has been talking about the institute of the church and particularly about the special offices in the church. In connection with the latter, he has just finished in the previous paragraph a discussion of Christian discipline.)

Dear Timothy,  We must conclude, in this letter, our discussion of the conscience. We talked last time about the fact that one who does not walk according to his conscience (as enlightened by the Word of God) creates many problems in his life so that he suffers great mental and spiritual distress. I want to discuss with you what a pastor must do under these circumstances as he comes face to face ‘with this problem.

“Who shot J.R.?” That question has become, whatTime Magazine in its August 11 issue calls, an “obsession” for “300 million souls in 57 countries” around the, world. Staggering figures, aren’t they? It is a question which is seen on bumper stickers; heard expressed, on radio and television; and yes, even used by the political candidates for the presidency of the United States. It is undoubtedly the case, therefore, that you are familiar with that question.

There has always been a good deal of discussion (and no little disagreement) in the church concerning the Jews. Just what place do the Jews occupy in the history of redemption? What does the future hold for the Jewish people? Will there be a mass conversion of Jews at the end of the ages? These are just some of the questions debated and discussed in the church for years already. But in that discussion there is one question which dominates and that is this: what is the church’s calling with respect to the Jews? Ought the church direct a significant...

Last year in the Standard Bearer there were two articles by Prof. H. C. Hoeksema dealing with our apparent over-supply of ministers. Prof. Hoeksema, however, pointed out that although there might be surplus at present, figured over the next five years or so, there is no surplus at all; and he very directly asked the question whether the Lord had a purpose in providing us with such an abundance.

With a sigh of relief Jacob watched Esau and his four hundred men putting distance between themselves and himself. What a great relief! For what fear gripped him when he heard that Esau was coming with four hundred men! And he, with an unarmed band of wives, children, and cattle, was as a sitting duck in a wide open country! He was heeding the command of God, Who ordered him to return to the land of his fathers. And God saw to it that after the meeting of Esau and Jacob not one drop of blood had been shed, and... 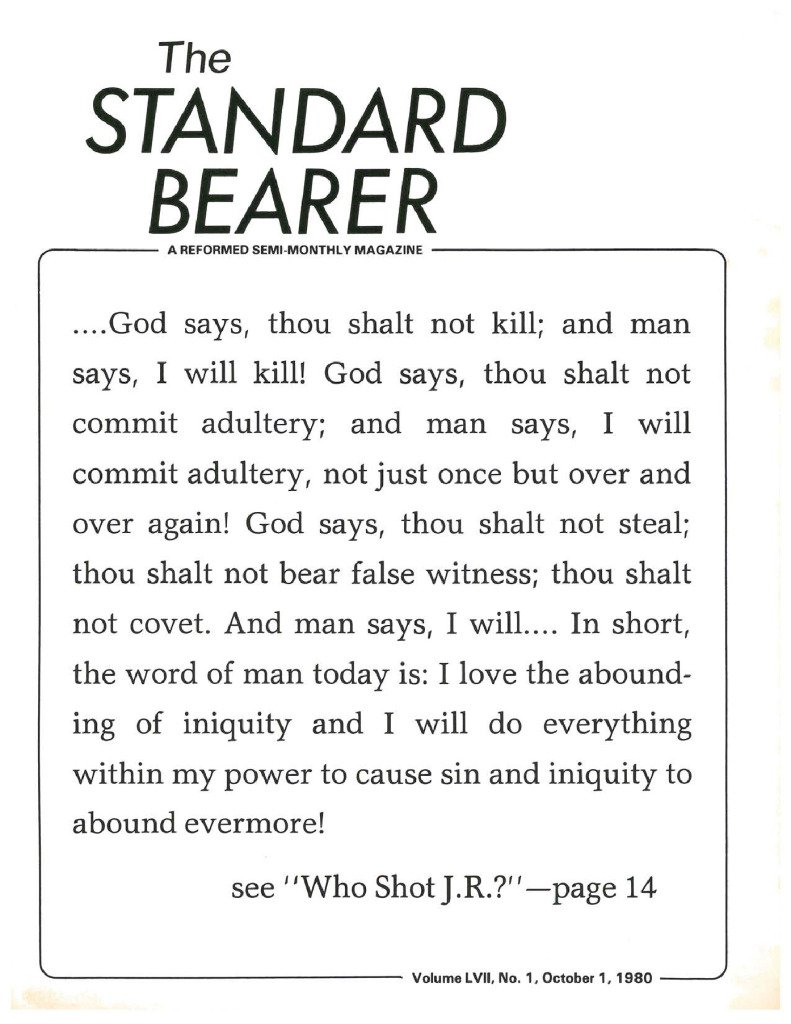