The writer to the Hebrews now has a few parting words for the Hebrews in connection with his letter, or perhaps doctrinal teaching with fit and necessary exhortations. Now that he has written all that which is contained in this letter there is but one thing left. This letter must be “received,” it must be read, digested, and the “word of exhortation” must be followed up by a conformable conduct and life. They must not be “carried about by divers and strange doctrines.” (Heb.

August 24-26 were the dates of the annual Protestant Reformed Young Peoples Convention. The 1976 convention was held at Camp Geneva on the shore of Lake Michigan just north of Holland, Michigan. Rev. Slopsema, Rev. VanOverloop, and Rev. Bekkering addressed the convention on successive evenings. The young people of our Southwest Church, Wyoming, Michigan were the host society for this year’s convention. They worked long and hard to make the 1976 convention possible. On June 10, the young people sponsored a “Family Night” in Grand Rapids to raise money for the convention.

WHAT ABOUT BAPTISM?, by Dr. F. N. Lee; Scottish Reformed Fellowship, Surrey, England; 17 pp., 20 pence (paper). [Reviewed by H. Hanko]  The so-called Reformed Baptist movement is a growing movement in our day, especially in England. Those who profess to be Reformed Baptists hold to the doctrines of grace especially as they are outlined in the five points of Calvinism. But they hold also to adult baptism. This little pamphlet is directed especially towards them.

There are many passages in the Bible that emphasize the truth of the antithesis. Do not let that word scare you. Literally, it means to be against God. By its usage, however, it means to oppose that which is against God. The calling of covenant youth is to oppose evil and thereby be free to promote the good. This is living the antithesis. The Word of God emphasizes this repeatedly. “Can two walk together except they be agreed?” Amos 3:3.

The subject of good works has given rise to confusion in the minds of some of God’s people. The reason for that is not difficult to understand. On the one hand, the Word of God and the Confessions speak of good works and admonish the saints to perform them. On the other hand the Word of God and the Confessions stress that our good works are not “the whole or part of our righteousness before God,” “and also that our best works in this life are all imperfect, and defiled with sin” (see the Heidelberg Catechism, Lord’s Day 24).

REV. TUININGA ON REPROBATION ACCORDING T0 THE CANONS OF DORDT.  The subject of reprobation received considerable attention in The Outlook of June, 1976. In an article, entitled: The Canons of Dordt on Reprobation, Rev. Jelle Tuininga, writes, among other things, the following (page 29):

Recently I received the following letter from Wellington, New Zealand, one of the places where Rev. C. Hanko and I visited, lectured, and preached during our tour. The letter is private correspondence, though there is nothing secret about. its contents. Rather than take the trouble of getting permission to publish—something that would take a long time—I will omit names. The contents of the letter speaks for itself.  Dear Professor Hoeksema,

End of Volume LII. This issue is the last in our 52nd volume-year, and we give thanks to God that He has directed our way to complete another year of publication. May our Standard Bearer ever continue to be just that, a bearer of the standard! Two notes in this connection: 1) In this issue you find an index for this year. 2) As soon as possible bound copies of this volume will be made available. Those who have standing orders for bound volumes will receive them as soon as they are finished.

Several months ago (April 1 and 15 issues) we began to write on this subject. Since our first two articles under this title appeared, there were other matters of more immediate importance which demanded our attention. Now we return to this discussion.  Perhaps a word of re-introduction is in order. 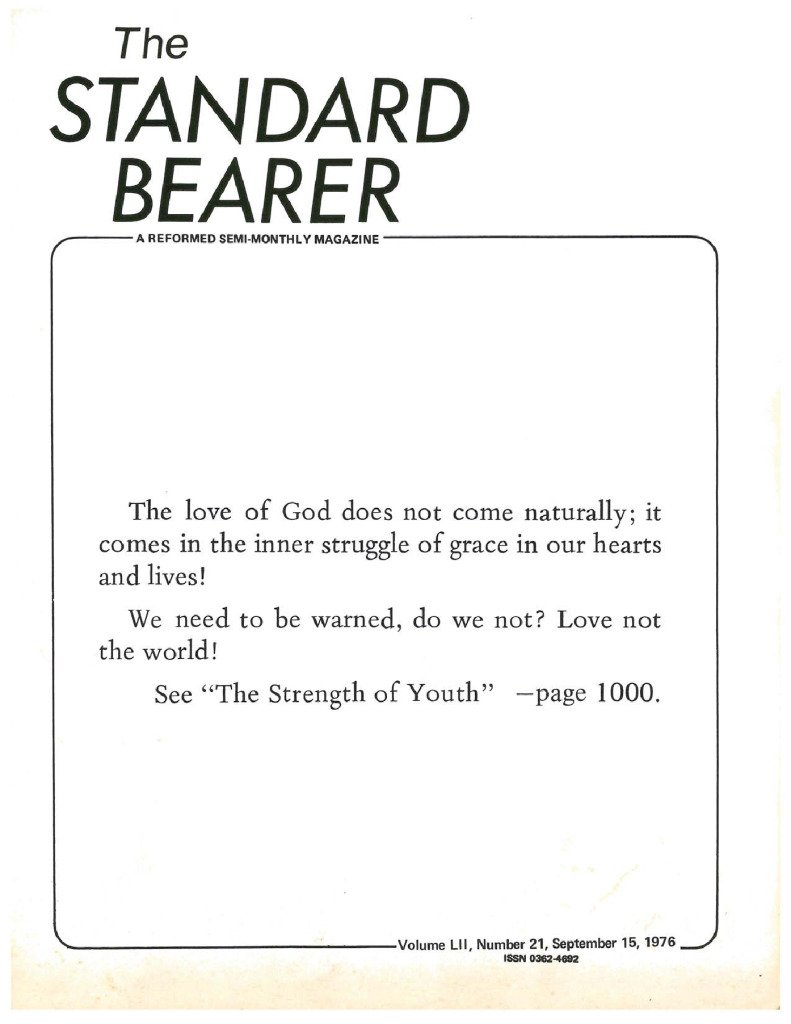