Once more the undersigned is back in Loveland, Colorado, where he is laboring, and is ministering unto the spiritual needs of the Protestant Reformed Hope Church of Loveland, Colorado. Yesterday, Sunday, September 18, I might again teach Sunday School, and preach twice in their midst. And it was a real joy to preach the Word in their midst. And it was also received, as it truly is, the Word of God, by this congregation.

* Address delivered on the occasion of the commemoration of Rev. Herman Hoeksema’s completion of 40 years in the gospel ministry.

Early Lost, Early Saved?  Such is the title of an article written by the Rev. Henry N. Erffmeyer appearing in The Banner of September 9, 1955. This title he borrowed from a little book he read which was written by George W. Bethune and published in 1846. Rev. Erffmeyer remarks that the only difference between his title and that of the little book is that he places a question mark (?) behind it, while Bethune uses a colon (:) and intends that his little book offers “an argument for the salvation of infants.”

The episcopate, notwithstanding the unity of the office and its rights, admitted the different grades of country bishop, ordinary city bishop, metropolitan, and patriarch. Such a distinction had already established itself on the basis of free religious sentiment in the church; so that the incumbents of the apostolic sees, like Jerusalem, Antioch, Ephesus, Corinth, and Rome, stood at the head of the hierarchy. But this gradation now assumed a political character, and became both modified and confirmed by attachment to the municipal division of the Roman empire.

Happiness in this life is the chief goal of all men.  And happiness means peace and comfort, security, and freedom from all poverty and want. It means, then, the possession of material goods, a substantial bank account or adequate returns from investments, and a settled and guaranteed employment or occupation or profession, which in turn gives security with a view to material possession and the freedom from want.

It is our plan to write an exposition of the first four chapters of Paul’s first epistle to the Corinthians. In this issue we place our first installment. The reason for beginning this series of articles in this issue of theStandard Bearer is that we are now beginning with a new volume of our paper, Volume 32.

Lord’s Day 48  Chapter 2: The Realization of the Kingdom  All the shadows of the old dispensation are now become reality and truth. Jerusalem, Mt. Zion, the throne of David, as well as the temple, the altar, and the perfect sacrifice, the king-priest forever according to the order of Melchisedec,—all are now in heaven, and all things are subject unto our Lord, who is the king of kings.  However, this is not the end.

We have a few more remarks about the article in Gereformeerd Kerkblad to which we referred in the last number of The Standard Bearer. 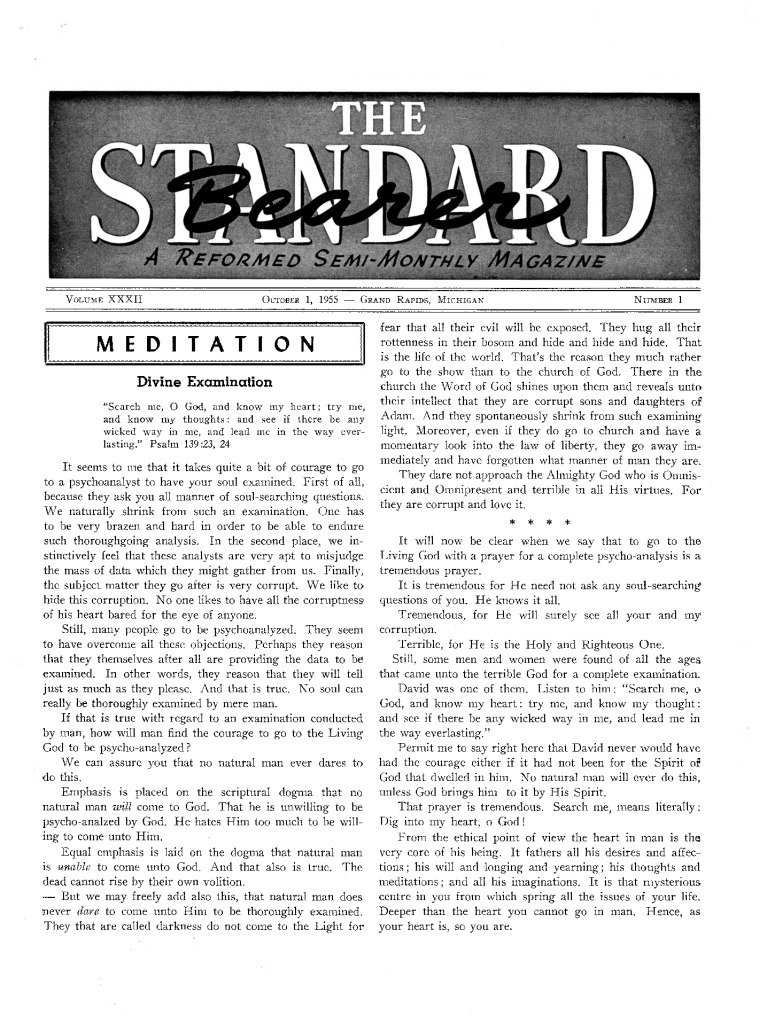