Chapter 3: Love of the Neighbor’s Person (cont’d)  By the power of that love we walk in the light. In that light we have fellowship not only with God, but also with one another, I John 1:5-7: “This is the message which we have heard of him, and declare unto you, that God is light, and in him is no darkness at all.

In the Concordia of March 10, 1955, appears an article by Rev. P. De Boer in regard to the Edgerton Lawsuit. We need not quote the entire article. In this article the Rev. P. De Boer writes, and I quote: “During the last few months we have made serious efforts on our part to seek an out of court settlement. It is in regard to this out of court settlement that we are writing. Our proposal, submitted the latter part of January of this year, assumed the form of a counter proposal. The reason for this was that the Veldman...

Excerpts from the Church Herald

“Students, who have received permission according to the rule of this matter, and persons who have according to Article 8 been judged competent to be prepared for the ministry of the Word, shall, for their own training, and for the sake of becoming known to the congregations, be allowed to speak a word of edification in the meeting for public worship.” (Art. 20, D.K.O.)

It is of prime importance when we are dealing with these matters concerning the assurance of election and the conviction of reprobation that we remember that these are essentially spiritual matters, and that the efficacious work of God is the ultimate cause thereof.

We concluded our preceding article with the remark that we would call attention in this article to the historical background for the conflict between Augustine and the Donatists. We must do this as a prelude to the role which Augustine later played in this important drama. And, as we observed in our preceding article, we are again indebted, also for this material, to Philip Schaff’s History of the Christian Church.

The subject of the proper relation of consistories to the existing societies, leagues or federations is often a matter of doubt or misunderstanding. In some instances this may even be stating the matter rather mildly. On the one hand, at the simple suggestion of some jurisdiction or supervision by the consistories, one happens upon the outcry of hierarchy. On the other hand, in discussing the relation of consistories to the above named organizations, we find the opinion that consistories should exercise not only supervision, but also jurisdiction over all the activities.

1. The word of the Lord unto Israel by the hand of Malachi. The word of the Lord comes to Israel, the postexilic remnant that has returned from the captivity of the Babylonian exile. In the final instance Israel is the church of the elect as comprehending both Jews and Gentiles.  1. The prologue—Jehovah’s love for Israel, Malachi 1:2-5.

Chapter 2: The Requisites of True Prayer (continued)  And thus, finally, we will also approach Him in the attitude of confidence, the confidence that He will surely grant us our petitions. For he that cometh unto God must believe that He is, and that He is a rewarder of them that diligently seek Him. Heb. 11:6.

The Future Of Our Churches (3) Fact is that, from the beginning of our separate history until the present time, no one ever dared to call us a sect or un-Reformed. In 1924 we did not depart from the truth of the Scriptures and the Confessions. Even the very synod of 1924, that desperately tried to brand us as un-Reformed, failed. For, under the kind providence of our God, they were forced to admit, in spite of themselves, that we were Reformed according to the Reformed Confessions, though it be with a tendency to one-sidedness. In this they condemned themselves. 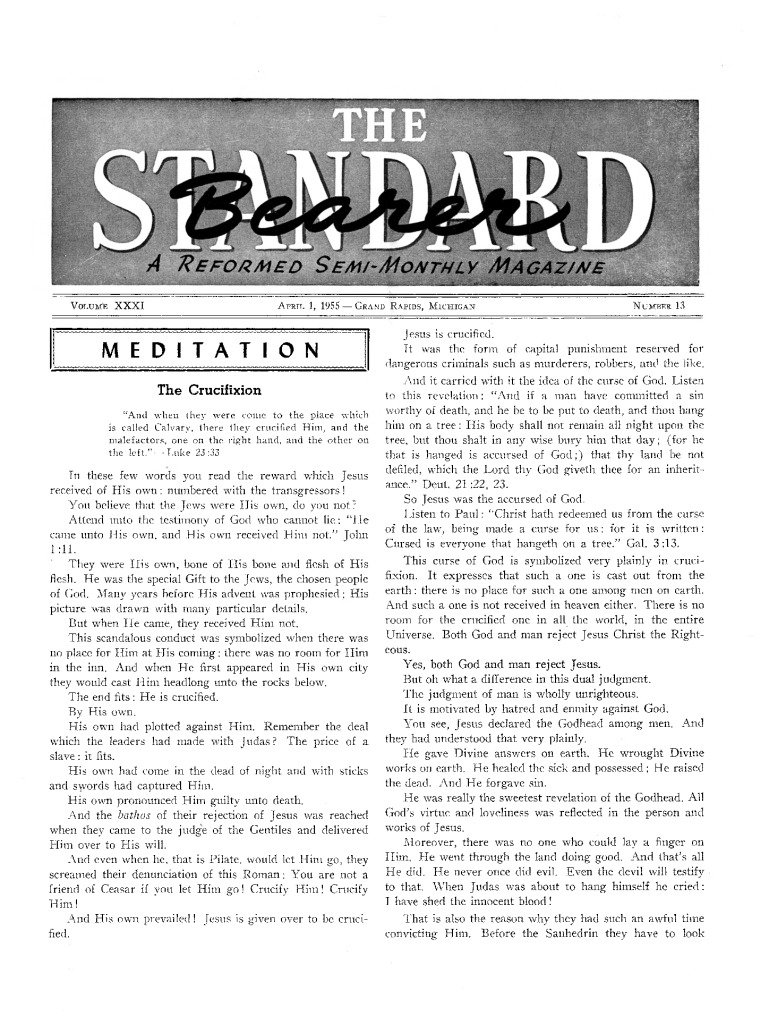